The T-80U Main Battle Tank was the best mass-produced variant of the T-80 series. It replaced the Leningrad (St. Petersburg) production of the T-80B in December 1984. 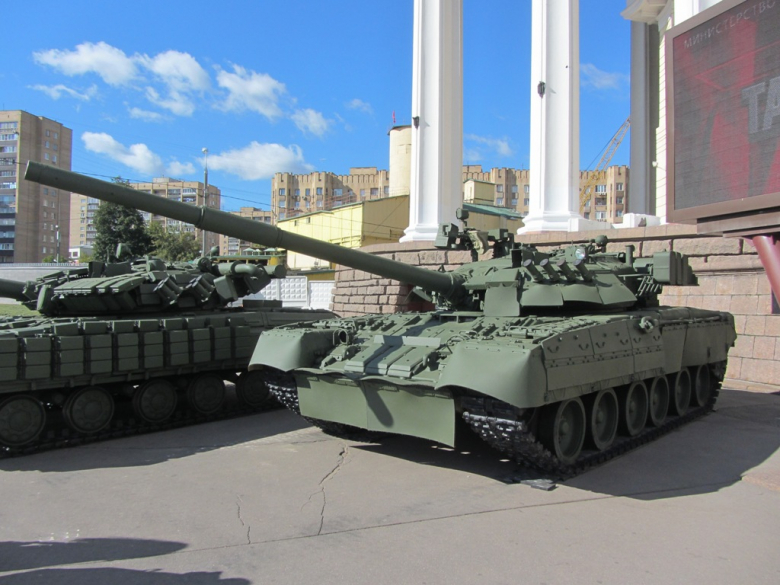 The problem with the T-80B model was that it was more of a reactive measure, an attempt by the Soviet tank industry to catch up with the evolving western designs. The T-80U, however, was an attempt to once again establish undisputed Soviet armor hegemony on the modern battlefield.

The U in the T-80U designation stands for uluchenny (improved). And that's what it was – a heavily improved version of the T-80, produced in the Kirov Plant in Leningrad. While many aspects of the T-80 were upgraded, special attention was paid to protection upgrades and it can be theorized that these improvements are the true raison d'être of this vehicle.

The development of the T-80U started in the early 1980s under N.Popov with the first prototype built in 1983 using a T-80B chassis. Unlike some other – more economical – models, the T-80U was, relatively speaking, a "spare no expense" project, which resulted in what was perhaps the most powerful MBT in the world for its time. 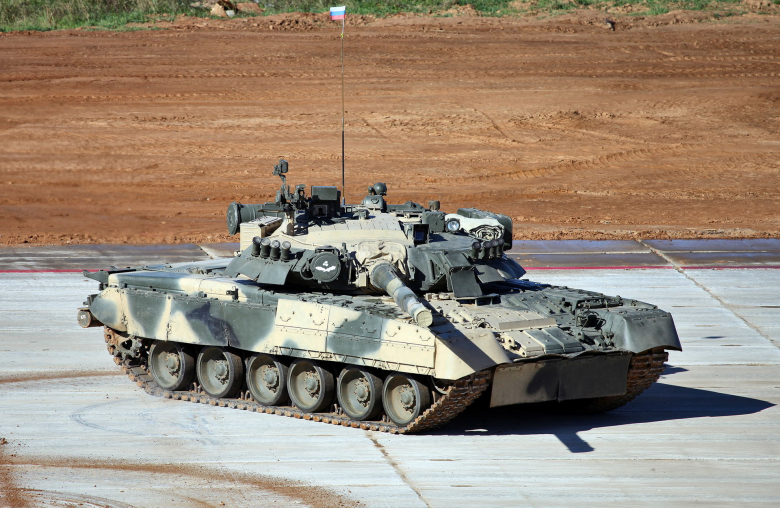 But this setup was soon changed by switching the 50mm plate in the middle for a 30mm one with a 20mm gap. The frontal hull composition was changed once again in 1989 by introducing ceramic inlays to the following setup:

This setup remained valid for the later improved T-80 versions, including those from Kharkov. The turret armor was further improved compared to the T-80B turret, which was on par with the T-64B and featured ceramic inlays. The inlays in the T-80U turret are considerably thicker, consisting of two 80mm layers of polymers covered by rather thick alloy coating and separated from the turret steel by 40mm hollows.

The hull and the turret were protected by an advanced Kontakt-5 Explosive Reactive Armor kit, covering more than 50 percent of the frontal hull, frontal turret, sides and roof of the tank. This ERA kit was used from 1985 onwards and remains – albeit in a modernized form – in service today on such vehicles as the T-72B3 or the T-90A. It's considered a heavy ERA kit, as it improves protection not only against HEAT rounds, but also against kinetic shells. Some sources claim the kit increases the original vehicle's protection by 80 to 100 percent against HEAT shells and by approximately 20 percent against kinetic shells. It's also very resilient – bullets and shells up to and including 30mm, HE shell fragments or even napalm do not detonate Kontakt-5 sections.

According to Russian sources, all these improvements meant the vehicle could resist all contemporary western ammunition from the front, with its frontal armor levels being equal to 620mm RHAe versus kinetic rounds and 1100mm RHAe versus HEAT rounds at its thickest points. The vehicle was also protected by a 902B Tucha smoke grenade launcher system.

However, these armor changes were reflected in the increased weight of the vehicle –T-80U weighed 46 tons, 1.5 tons more than its T-80BV predecessor.

Firepower was also improved. Compared to the original T-80B, the T-80U was equipped with an improved gun, the 125mm 2A46M-1 smoothbore cannon (it's worth noting that the T-80B received the same gun upgrade in 1982). The amount of ammunition carried was also increased from 38 to 45. The vehicle was also equipped with a Refleks gun-launched guided missile system. Its 9M119 missiles were capable of defeating any western tank at ranges from 100 to 5000 meters with 80 percent hit probability.

The vehicle was also fitted with an advanced 1A45 Irtysh Fire Control System that included:

And then there was the engine – the T-80U was powered by a GTD-1000TF turbine, the power of which was increased from the original 1000hp to 1100hp (the same engine was installed in the later T-80B variants). And herein was the problem. While powerful, the engine turned out to be extremely expensive.

Some sources say the price of the turbine was ten times higher than a V-46 tank diesel engine – and that's disregarding the fuel costs (it was a rather fuel-hungry turbine) and maintenance. The power came at quite a cost and in the late 1980s prices had become an increasingly important issue in the declining Soviet Union. 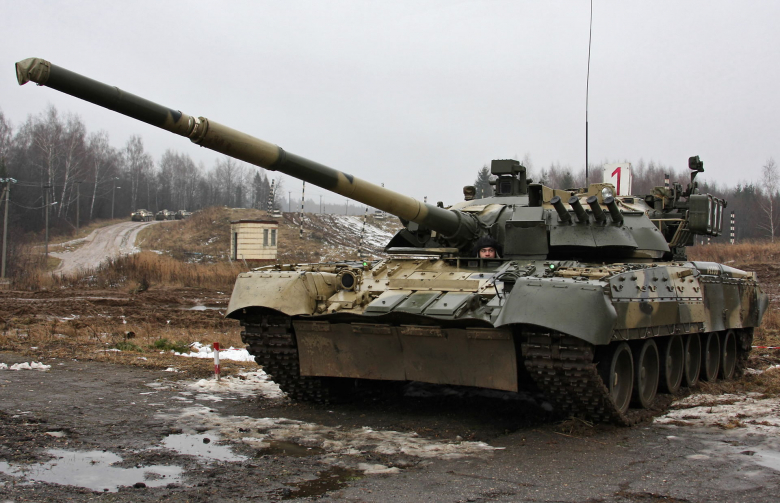 The first two dozen pre-series T-80Us were built in late 1983 with full production starting in 1985.

Throughout its production, the vehicle was plagued by its high costs, stemming from both the advanced technologies used and the engine.

There were multiple attempts to solve the engine cost issue by installing a diesel engine into the T-80U. Perhaps the best-known is the T-80UD by the Kharkov plant – the T-80UD has a Kharkov-developed 1000hp diesel instead of the turbine. A similar program was attempted by the Omsk plant, but the Ukrainian T-80UD line was more successful, starting an entire off-shoot branch of the T-80 development. The Ukrainian T-80 variants eventually resulted in the BM Oplot MBT, but the Kharkov T-80 development goes beyond the scope of this article and will be covered in the future.

In Soviet service, the vehicle received a new 1250hp GTD-1250 engine in the late 1980s, but that was as far as the Soviets got. The T-80U was produced between December 1984 and 1997, although much of the post-Soviet production took place in Ukraine. The best estimates place the number of T-80Us built at around 3000 – but there are many different estimates depending on the source and the actual production numbers are naturally still classified. 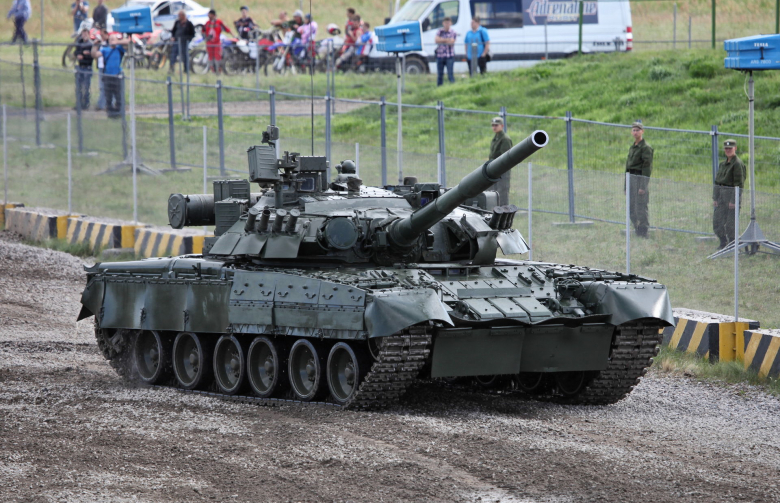 Russia still has around 500 T-80s of different variants in service with approximately 2000-3000 various T-80s held in reserve. How many of them are actual T-80Us is not known. The T-80 was officially scheduled to be phased out of Russian service in 2015, but budget cuts along with the next generation MBT development will probably keep them around for a while longer.

Ukraine, being one of the two T-80 producers, kept a number of T-80s around, but their current active number and state is unknown – it's unlikely that many of the T-80Us left in Ukraine are operational, although some might still be kept mothballed in reserve. Other post-Soviet countries such as Uzbekistan, Belarus and Armenia likely inherited a relatively small number of these vehicles.

Exports were moderately more successful. Unlike the T-80 and T-80B MBTs, the T-80U was actually offered for export. Cyprus bought a few and about three dozen were given to the Republic of Korea to cover a debt. Other than that, the export history is quite hazy. There are reports of T-80s being sold to Angola, Yemen and Egypt in the 1990s and early 2000s, but these reports have never really been confirmed. The biggest export deal concerned the diesel T-80UD version from Ukraine – more than 300 were sold to Pakistan between 1997 and 2002. 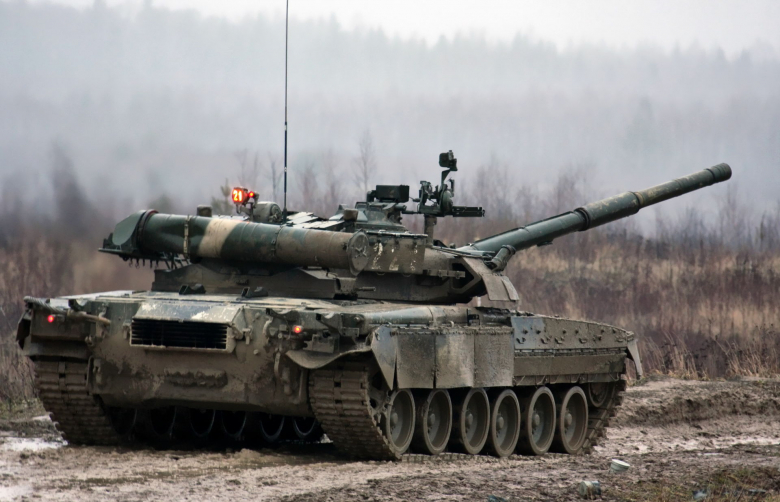 Despite finding their way across the world, the T-80Us were never used in combat.

In Armored Warfare, the T-80U will be introduced as a Tier 7 Main Battle Tank as part of Balance 2.0, continuing the T-80 line. It will be the most advanced T-80 in the game, featuring powerful ERA as well as other technology. For more details, please visit our Balance 2.0 article dedicated to progression changes.