While not as iconic as the ubiquitous T-72, the T-80 Main Battle Tank was an important part of the Soviet war machine. Even though the two tanks share typical Russian tank looks to the point that they look the same to a layman's eye, they are two different beasts entirely. After all, unlike the T-72, the T-80 was intended for Soviet use only. 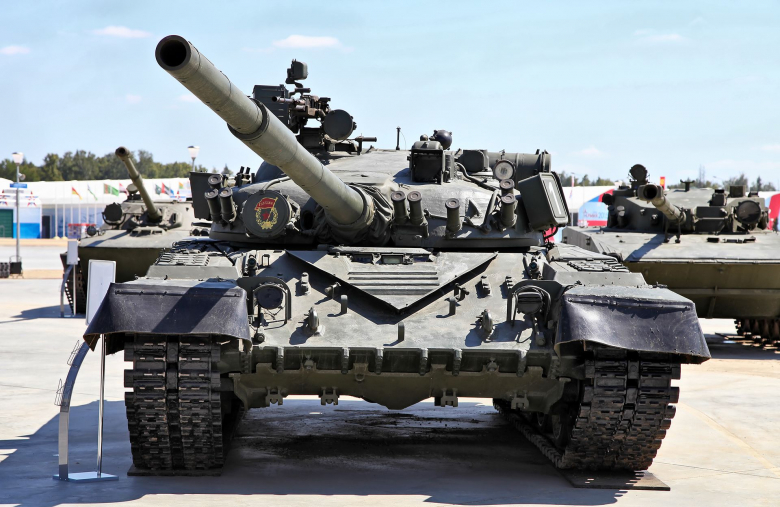 In the 1960s, the Soviets were undisputed leaders in tank technology. No mass-produced western tank could match the armor and firepower of the T-64. The Soviets, however, realized that a response from NATO would not be that far away, leading them to develop something even better. One way to achieve that was to significantly improve tank mobility by introducing a new type of engine to Soviet tank forces – a gas turbine.

While early Soviet attempts to mount a turbine engine into a tank reach back to the late 1940s, the origins of the T-80 can be traced back to the Kharkov-built T-64T prototype from 1963, equipped with a 700hp GTD-3TL engine. In 1964, Uralvagonzavod in Nizhny Tagil responded with its own turbine-powered tank, Object 167T and its GTD-3T 800hp turbine, developed under N.L.Kartsev. These early turbine tanks all faced the same teething problems – the turbines would overheat and were extremely sensitive to dust. Air intake filtering was a constant issue for a tank that required 5 to 6 cubic meters of air per second while possibly moving in a constantly dusty environment.

It took more than half a decade to find appropriate solutions to these issues. On April 16 1968, the SKB-2 design bureau of the Kirov Plant was tasked by the USSR government with building an improved T-64 variant and one of the requirements was for it to have a turbine engine instead of the classic diesel engine. This resulted in a prototype called Object 219SP1 from 1969. It looked much like the older T-64T, but this time it was powered by an improved 1000hp GTD-1000T turbine. A total of 31 vehicles of this type were built.

Further improvements to both mobility and other combat characteristics were needed, resulting in a prototype designated Object 219SP2. The vehicle kept the T-64A 125mm gun and its automatic loader mechanism, but the suspension was overhauled. The turret remained the same as on the T-64A. In this sense, the original T-80 was still relatively close to the T-64A it originated from, something that only changed later.

Around 127 early Object 219SP2 prototypes and pre-series vehicles were built and thoroughly tested. The process took nearly seven long years, before the vehicle was accepted into service on June 6 1976 under the designation of T-80. 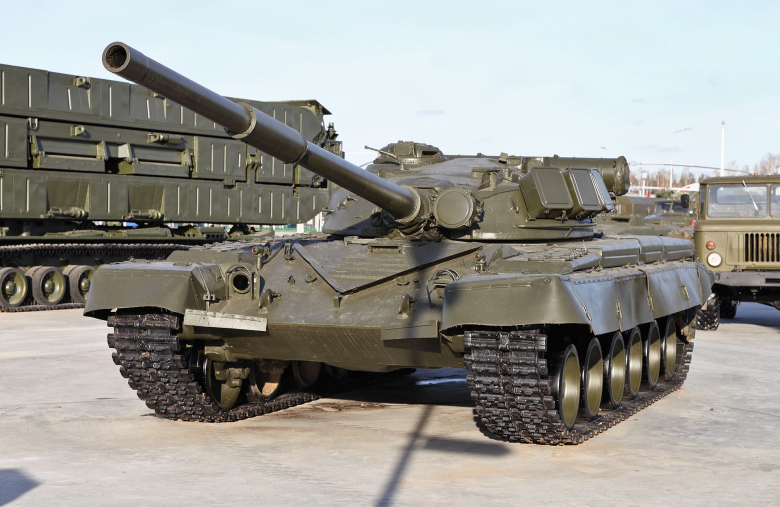 The original T-80 was produced by the Kirov Plant in Leningrad (St. Petersburg) between 1976 and 1978 and with approximately 250 built, it became the world's first mass-produced tank powered by a gas turbine. It weighed 42 tons and was powered by a Klimov GTD-1000T 1000hp turbine engine paired with a mechanical planetary transmission, allowing it to go as fast as 70 km/h. Much like the other tank diesel engines, it could use multiple types of fuel including TS-1 and TS-2 aircraft fuel, diesel and even the low-octane gasoline used in civilian cars. The turbine engine was not as noisy as diesel engines, increasing the likelihood of the tank remaining undiscovered when in motion.

Thanks to its new individual torsion bar suspension, which resembled the T-72 more than the T-64A, and its modified turret, western militaries at first confused the T-80 with the T-72, to which it was superior. The frontal hull armor of the early T-80 was sloped at 68 degrees from vertical and its composition was identical to the T-64A. It consisted of the following layers:

From 1982 onwards, all T-80 (and T-80B) hulls received an additional 30mm applique plate to their upper frontal armor.

The T-80 turret was composite – cast steel hardened steel "ribbing" inlays, similar to the T-64A system. The original T-80, however, was not equipped with explosive reactive armor.

The T-80 was armed with a fully stabilized 125mm gun 2A46-1, used on the T-64A and the T-72s, although it's worth pointing out that the T-64A and the T-72 variants are not interchangeable, they use a different autoloader as well as other elements. The gun could depress to -5 degrees and elevate to +14 degrees. In its original form, it could not be used to launch guided missiles. The gunner used the TPD-2-49 gunner sights. 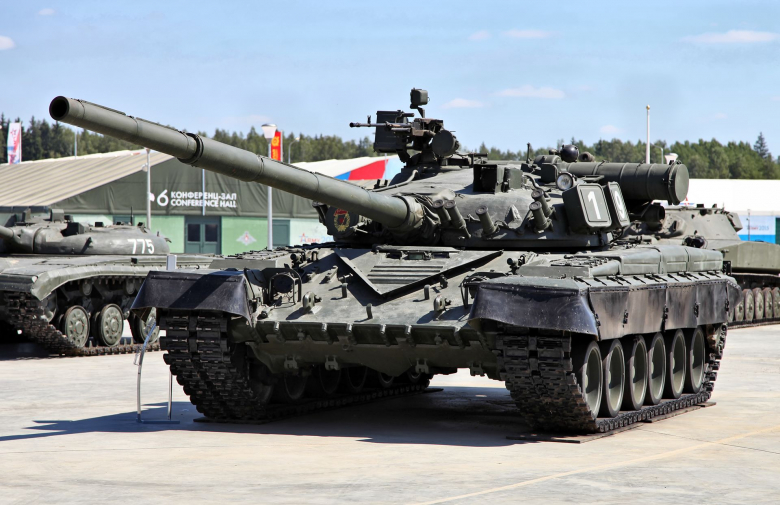 The problem with the original T-80 was that while the concept was sound in the late 1960s, the long development and testing period meant that, when the vehicle was finally accepted into service, it was far less formidable than its designers planned it to be. The late 1960s was the era of the M60A1 Patton, while a decade later the Americans were already testing the first prototypes of the M1 Abrams. But not just that, the T-80 was also inferior to certain Russian designs (such as the T-64B with improved turret armor layout and FCS).

The Soviets, fearing they’d lose their edge, quickly started working on a response in the form of Object 219R, an improved version of the T-80, which entered service only 2 years after the T-80 under the designation of T-80B. It should be noted that the original Kirov Plant upgrade line went from T-80 straight to T-80B – the T-80A (also known as Object 219A) was something completely different (a T-80 upgrade prototype from Kharkov, built in 1982).

The 1978 pattern T-80B had a number of advantages over the T-80. For one, the hull composite armor was changed to increase the protection of the vehicle. The layers were as follows:

The turret was also improved and the protection level was now on par with the T-64B, the inlay became ceramic. The vehicle was protected by a 902A Tucha smoke grenade launcher system, which was also missing on the original T-80. On the other hand, the vehicle still lacked an ERA kit, something that would prove very problematic in the future.

The biggest change was the armament. The modified 125mm 2A46-2 gun could now launch guided missiles using the 9K112-1 Kobra system (missile designation was 9M112). The Cobra system allowed the gunner to launch the missile at 4 km with an 80 percent first hit chance. The Fire Control System was also upgraded to the 1A33 model, consisting of:

And several other elements. The new FCS significantly improved the accuracy of the vehicle on the move.

The improvements continued over the next few years – in 1982, for example, the T-80B (like the T-80) received an additional 30mm applique plate, mounted on the hull upper front and a new gun (the 2A46M-1). 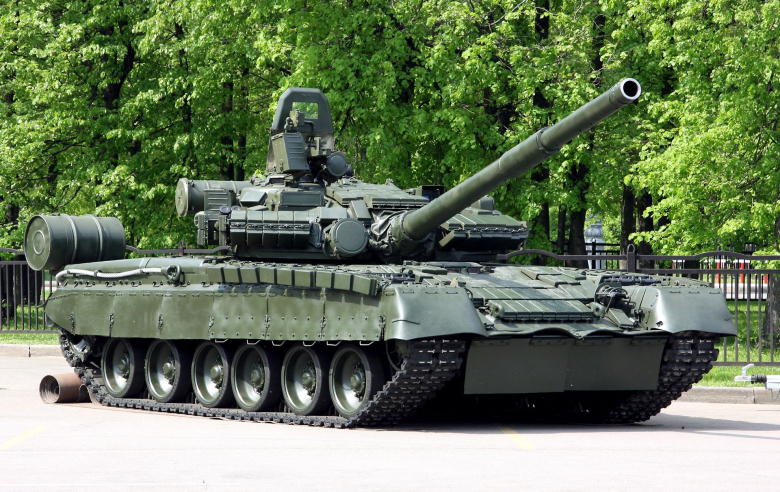 This layout was briefly shared with the earliest T-80Us. The new T-80BVs also used yet another turret composite armor inlay, similar to that of the T-72A.

In 1985, the production of the T-80B was replaced by an improved variant, the T-80U. It is unclear how many T-80s and T-80B/BV vehicles were built in total between 1976 and 1985, the most likely number is somewhere between two to three thousand.

Considering that the T-80 was essentially an internal Soviet use only tank and was generally not exported (apart from the former Soviet republics), it's no wonder the vehicle saw considerably less combat use than the T-72. Apart from some minor engagements during the breakup of the Soviet Union, the first and only major combat use of the T-80 and T-80B (T-80BV) tanks happened during the First Chechen War and the ill-fated Siege of Grozny, where Soviet tank units, driving into the city without proper infantry support, received staggering losses after being engaged by Chechen RPG teams positioned on top of buildings. 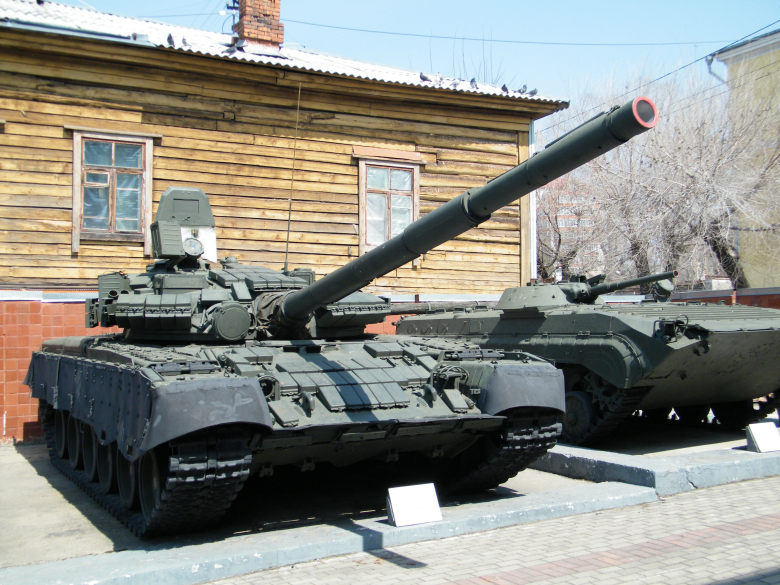 The unprotected top sections of the vehicles proved to be extremely vulnerable to even older RPG models and dozens of burned out wrecks littered the battlefield when the action was over, shocking the Russian military command deeply. It wasn't really the fault of the T-80, not completely anyway – the T-72s used didn't perform much better (nor did other Russian armored vehicles) – but the engagement unveiled some of the design flaws of the older T-80, such as autoloader vulnerability, leading to spectacular explosions the crews had no chance of surviving.

The T-80, T-80B and T-80BV models (unlike the later T-80Us) were not exported and were thus not used by any other countries.

As was announced earlier, when it comes to Armored Warfare, the current T-80 will be split into Tier 5 T-80, Tier 6 T-80B and Tier 7 T-80U as part of the Balance 2.0 changes. More information on Balance 2.0 will be coming soon!