The T-54/55 Medium Tank family is, without a doubt, one of the most iconic armored vehicles of all times. Throughout the Cold War, even with the appearance of much more modern vehicles, its distinctive silhouette remained one of the symbols of Soviet armored might. With, according to some sources, around a hundred thousand vehicles built, the T-54/55 series of vehicles is the most produced tank series of all time. It was widely exported and used by dozens of countries. 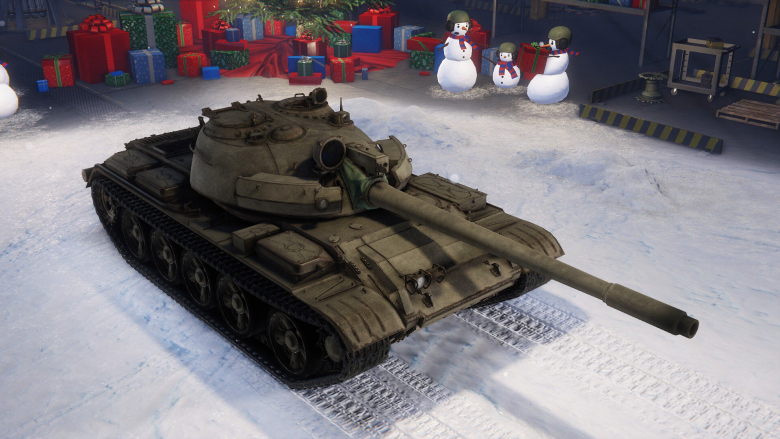 The T-55 itself was developed as an upgrade of the aging T-54 (which was basically a late World War Two design). The early prototype was called Object 155. It was designed at Plant No.183 in Nizhny Tagil by a team led by L.N.Kartsev in the summer of 1957. Its main advantage over rival advanced medium tank projects in the Soviet Union was the relatively low cost of such an upgrade compared to starting production of an entirely new tank model.

The upgrade was based on the T-54B with several important improvements, specifically:

Armor protection was not changed significantly compared to the T-54 – the rear hull armor thickness was reduced from 45mm to 30mm (upper rear) and from 30mm to 20mm (engine deck) to save weight and the engine deck thickness was reduced from 20mm to 15mm. The loader's hatch on the turret was redesigned as well (in connection with the removal of the machinegun). Thanks to a V-55 580hp engine, the tank was actually relatively fast (reaching 50 km/h), the armament, however, remained the same (100mm D-10T2S rifled gun) and its obsolescence eventually led to the appearance of the T-62 medium tank. 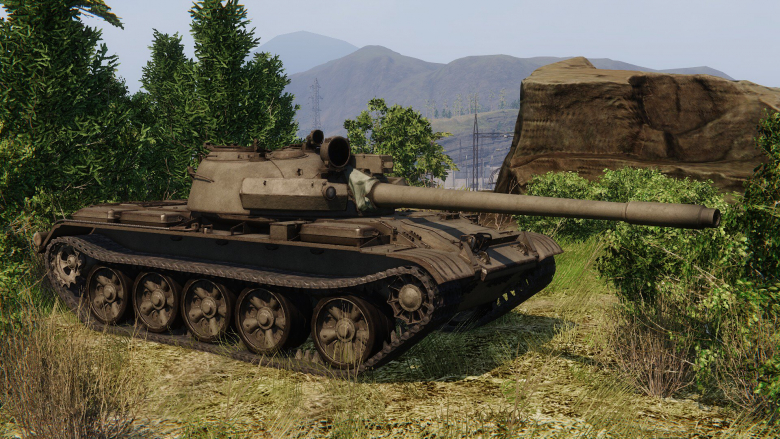 Two prototypes were built and tested from the winter of 1957 to the spring of 1958. The tests were generally successful and the vehicle was accepted into service under the designation of T-55 in May 1958.

By the late 1960s and the 1970s, the T-55 was becoming increasingly obsolete, which was a problem for the Soviet Union and the entire Warsaw Pact, which was operating very high numbers of the T-54/55 series. All the Warsaw Pact members realized this and worked independently on various improvements to the tank, resulting in a considerable amount of both national and Soviet T-54 and T-55 sub-types that looked and worked more or less the same. The improvements generally focused on:

The Soviet T-55M was one of these improved variants. The decision to develop it was taken on July 25 1981 and the goal (quite an optimistic one) was to improve T-55 protection and firepower to T-64A/T-72 levels. 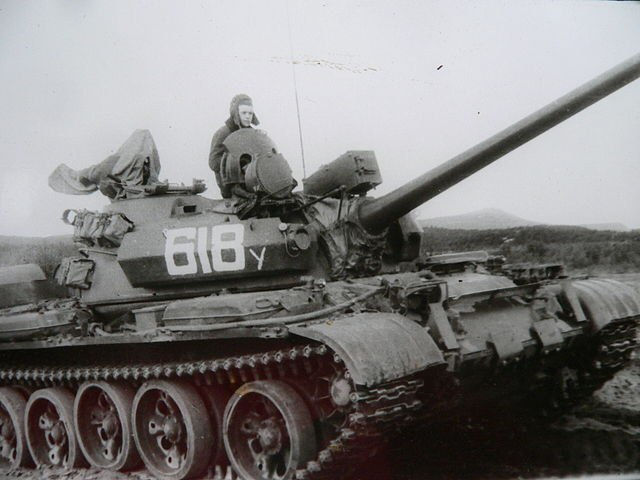 The armor of the tank was increased by adding applique BDD plates to the upper frontal hull and additional BDD armor plates (nicknamed Ilyich's Eyebrows by some western publications) to the most exposed frontal parts of the turrets.

This composition, while space-intensive, adds increased protection value against HEAT rounds. As a result, the vehicle has approximately 450-490mm of frontal armor protection versus HEAT and 320-380mm versus APFSDS. The protection increase was comparable to the early variants of Chobham armor. By itself the entire BDD armor kit weighs approximately 2 tons.

New anti-HEAT rubber screens were installed on the sides of some vehicles, although this feature was optional and many vehicles lacked it. Last but not least, the frontal part of the bottom (from the Lower Front Plate weld to the second pair of roadwheels) received an additional 20mm of armor as anti-mine protection. 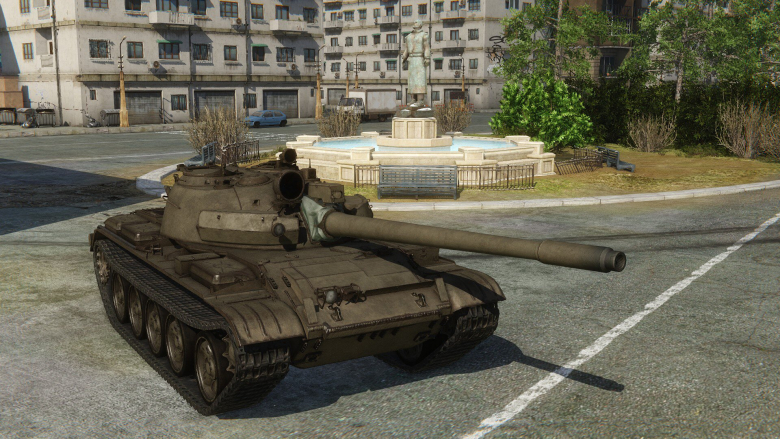 As for other protection measures, new 81mm 902B Tucha smoke grenade launchers were installed on the turret and the vehicle received the Soda anti-napalm system.

The next big change concerned its firepower. The vehicle kept its 100mm D-10T2S gun (the barrel also received a new thermal shroud), but received a new Volna Fire Control System, consisting of:

The accuracy was significantly improved as a result, but the vehicle received something else to add to its destructive capabilities: the 1K116-1 Bastion system, allowing it to launch guided missiles from its barrel. The Bastion system used the special 3UBK10-1 round, firing the 9M117 missile, which is capable of penetrating up to 750mm of steel. The minimum range was 100 meters, the maximum 4000 meters and the average velocity of the 9M117 missile was 370 m/s.

The problem with the Bastion missile system wasn't its efficiency (it could destroy practically any contemporary enemy tank), but its price. Two of these missiles were as expensive as an entire tank.

All these changes were of course heavy – the weight of the vehicle increased from 36 to 40.9 tons. To compensate for this increase, the vehicle received an upgraded variant of the classic V-55 engine called V-55U with its power increased from 580hp to 620hp. As for the suspension, there were some slight tweaks to it and the drive sprocket received a welded cover that prevented the track from slipping from it. The vehicle also received new track links (different grousers) for improved off-road capabilities.

There were four sub-types of the T-55M:

Visually it's quite difficult to tell them apart from other modernized variants – indeed, many of the T-55M photographs available on the internet are mislabeled Czechoslovak or Polish tanks. The Soviet T-55M was further developed to produce the T-55MV, equipped with a Kontakt ERA kit.

It's difficult to track how many T-55s were modified to one of the M/AM variants in the Soviet Union. The best estimate is several thousand, which then made their way across the globe. Details about their combat performance are equally sketchy, although some were apparently used in Afghanistan. 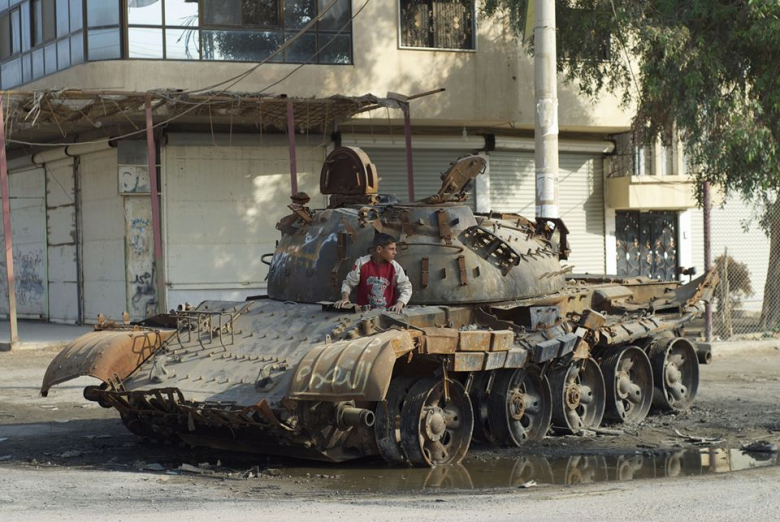 A considerable number of T-55s (including the T-55MV model) was sold to Syria and sources of varying quality place hundreds of T-55M variants in Angola, Cuba, Finland, Georgia, Sudan, Somalia and Uganda, although (given the nomenclature chaos) at least some of these are very likely tanks of Polish or Czechoslovak origin, which are not identical to the Soviet ones.

In Armored Warfare, the T-55M1 will replace the exclusive Object 155 and will move to Tier 4. All Object 155 owners will have their vehicle replaced with the T-55M1 while the Object 155 itself might return later on on lower Tier.