Today, we’d like to introduce a very special vehicle to you – the first of the exclusive reward tanks that will only be available during a massive upcoming Middle-East-themed event in Armored Warfare, which will be a major part of the next season. The first of the many prizes that we are working on for you is the T-55 Enigma. 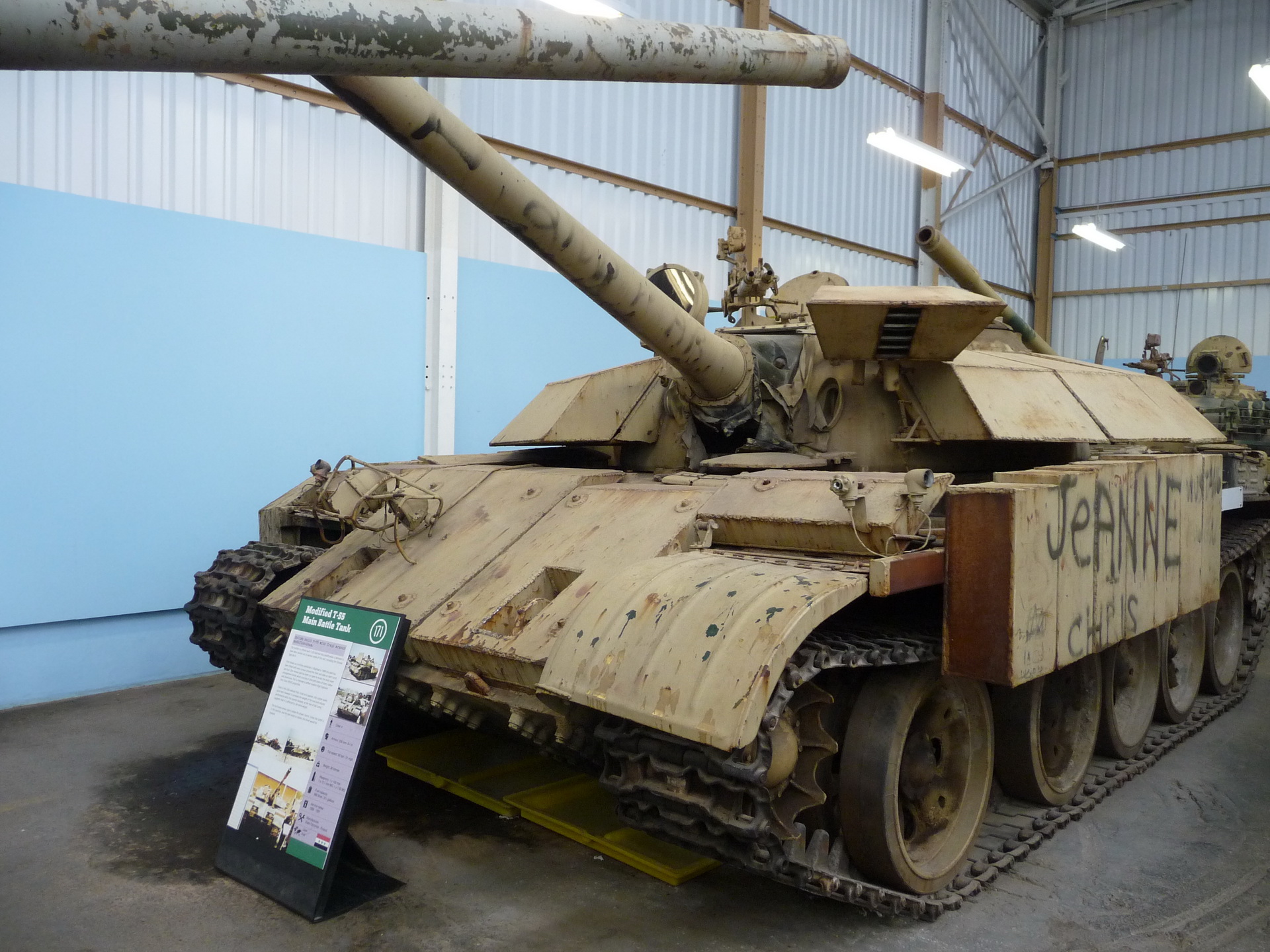 The T-55 medium tank needs, of course, no introduction – as a part of the most produced tank series in history, it was used by the Soviet Union, the entire Warsaw Pact and many third world countries, including those in the Middle East. Throughout its production and even after its end, there were a number of upgrades developed for it – some of the Soviet ones are described in our dedicated article.

The Soviets were, of course, not the only ones to develop upgrades for this vehicle. The industrial Warsaw Pact powerhouses such as Czechoslovakia and Poland developed their own series of improvements, resulting, in some cases, in successfully modernized variants that were more than a match for the Soviet originals, such as the T-55AM1. There were, however, other third party attempts from countries without the traditional military and industrial expertise of the Warsaw Pact – and those did not do so well.

As was mentioned above, one of the traditional markets for the T-series was the Middle East where Egypt, Syria and Iraq were, for a long time, allied to the Soviet Union, and were the largest recipients of its military aid (either directly or via Czechoslovak and Polish proxies). The T-55 in particular was quite common and dumping obsolete T-54s and T-55s in the Middle East became a standard Warsaw Pact practice for the remainder of its existence.

Iraq in particular acquired a large number of T-55s throughout the years, even though tracking the exact numbers is very difficult. According to the most common account, Iraq purchased 300 T-55 tanks in 1973 following the Yom Kippur war losses (its contingent took quite a beating during the conflict) with roughly more 1500 tanks of the same type acquired from Poland and the Soviet Union as well as from other smaller sources in the 1980s along with 1500 more Chinese Type 59 and Type 69 tanks. A large number of these tanks were, once again, lost during the Iran-Iraq war that took place between 1980 and 1988 and by the end of the conflict, the country, albeit undefeated, was seriously weakened with much of its modern equipment lost to the Iranians.

Of course, the main problem was that the Iraqi coffers were as depleted as its military and just purchasing large amounts of modern equipment was out of question. Instead, the Iraqis were reduced to assembling some kit-bashed T-72s (that later became infamous under the name of Asad Babil – Lion of Babylon) and modernizing the remaining fleet of Type 59, Type 69 and T-55 tanks on a budget. Despite its losses, the Iraqi army was still very numerous and operated some one thousand T-55 variants or clones by 1988-1989 (at least on paper, there is no doubt that many of these were in various states of disrepair).

Apart from its obsolete firepower, a T-55 had one more massive problem by the end of 1980s – its protection levels were laughable and the tank was vulnerable to pretty much anything heavier than a machinegun. This was not a problem when fighting local resistance that often only had old rifles, but defeating a regular army was another matter entirely.

Unfortunately for the Iraqis, upgrading the firepower of an existing tank is no small feat and is all but impossible for a third world country. You only really have several options: replacing the gun with something else (adding logistics issues to the heap of other problems), buying modern ammunition or various expensive solutions such as using gun-launched guided missiles. Despite the American support to Iraq during the Iran-Iraq war (leading to an absurd state of things where the Americans provided spare parts for Soviet equipment to the Iraqis while the Iranians used actual American arms), this was not really a cost-effective option. That left the Iraqis with only one thing to do – to at least upgrade the tank’s survivability.

The Iraqis achieved this by developing an armor kit for the T-55 and its Chinese clones, consisting of:

This armor kit was clearly inspired by the Warsaw Pact M-series armor upgrades available for the T-55 and T-62 tanks that combined angled steel plates and polyurethane inlay to defeat incoming HEAT projectiles (more specifically, guided missiles and RPGs). The Iraqis were not blind to the danger these weapons posed, but were severely limited by the technology available to them. As a result, instead of the abovementioned polyurethane layers, the boxes of this set consisted of angled aluminum plates (15mm), steel plates (4mm) and rubber plates (5mm) on top of each other, separated by approximately 25mm gaps of air. Five or six such composite plates formed the inside of the turret armor boxes made of 5mm steel plates. 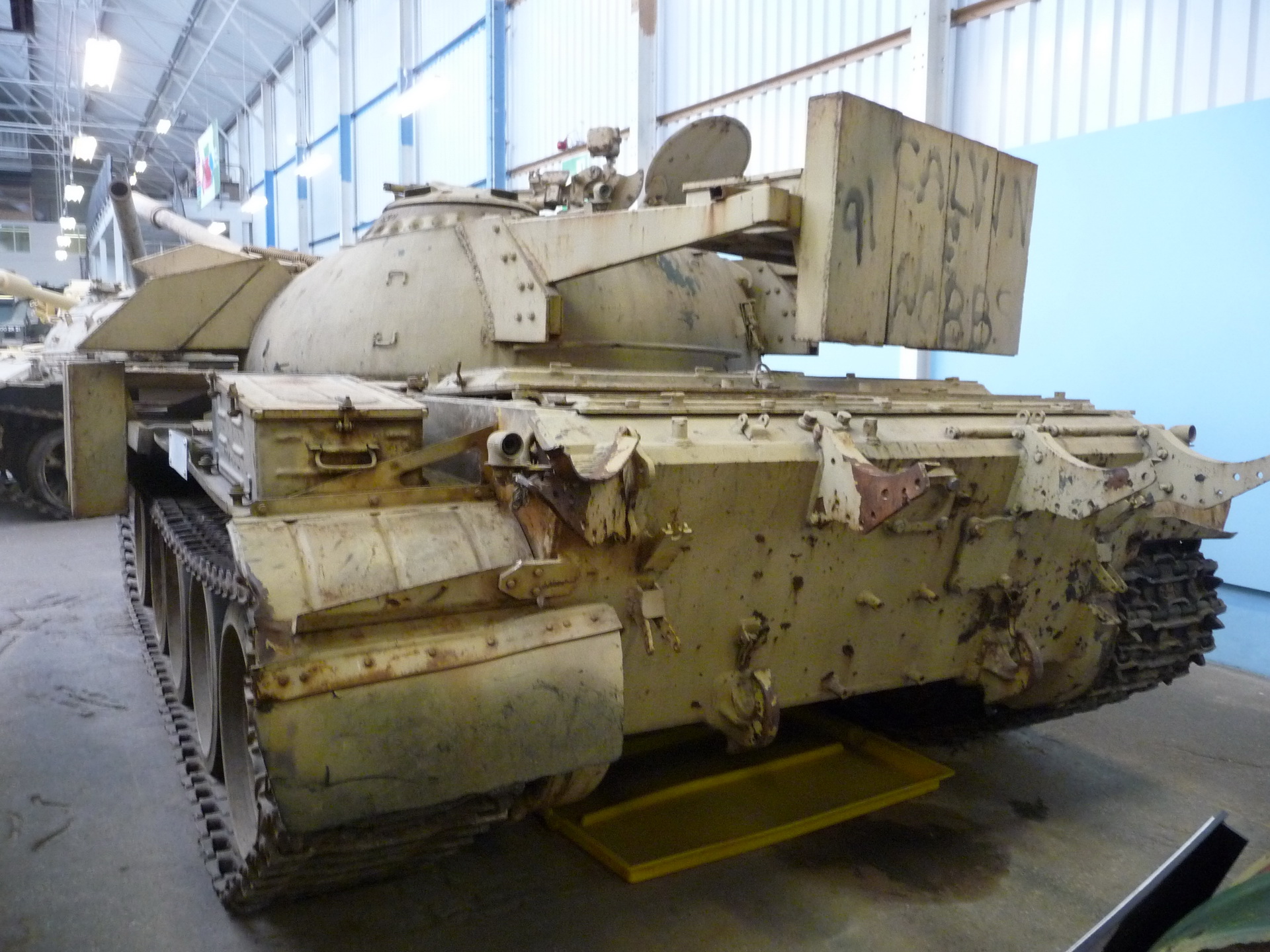 The entire kit weighed roughly 4 tons, adding approximately 10 percent of extra weight to the tank carrying it without any engine power increase, leading – allegedly – to somewhat reduced mobility and reliability. The first prototype for the kit (apparently based on a Type 69) was shown to public in 1988 or 1989. It lacked the turret counterweight but had two sets of smoke grenade launchers that were not present on the mass-produced variant. Following this development, an unknown number of T-55 tanks (or their Chinese versions) were modified – estimates vary between eight and a dozen vehicles. Each of these tanks was effectively an individual custom upgrade with various things done differently – sometimes the armored cowls for the searchlights were missing, some tank headlights were attached differently, the elements were of different sizes etc.

Their official designation is unknown, although some sources state that they were called “Al Faw” by the Iraqis. The T-55 Enigma name is unofficial and likely appeared only after Operation Desert Storm when the news of these tanks started arriving in the west and nobody really knew what they were looking at (an enigma). Needless to say, the name stuck.

The rest, as they say, is history. All the Enigmas built were likely lost during the Coalition invasion of Iraq. As combat vehicles, these tanks were quite useless. They were apparently only used in one battle, the Battle of Khafji in late January 1991 as a part of the 5th Iraqi Mechanized Division, where they made no real difference. After all, underneath the massive-looking armor upgrade, the Enigma was still an obsolete T-55.

However, the armor upgrade itself might have not been as useless as the Iraqi military performance would suggest. Several reports mention the tank actually being quite resistant to MILAN ATGMs. How much of that is true is difficult to speculate. Other reports do mention them exploding just like any other obsolete Soviet tech on the battlefield.

Whether the Iraqis believed the upgrade was actually viable is an interesting topic though. The author of this article had the pleasure of speaking with a man stationed in the Middle East before the invasion, who shared an interesting story. According to his account, the Iraqis were cheated by a supplier and received some 125mm kinetic rounds with a core made of soft steel (this part is generally known). The Iraqis then test-fired these at a “T-55 with upgraded armor” that resisted the shells splendidly, leading them to perhaps overestimate the effectiveness of this armor upgrade. Such naivety was allegedly not uncommon in the Middle East. 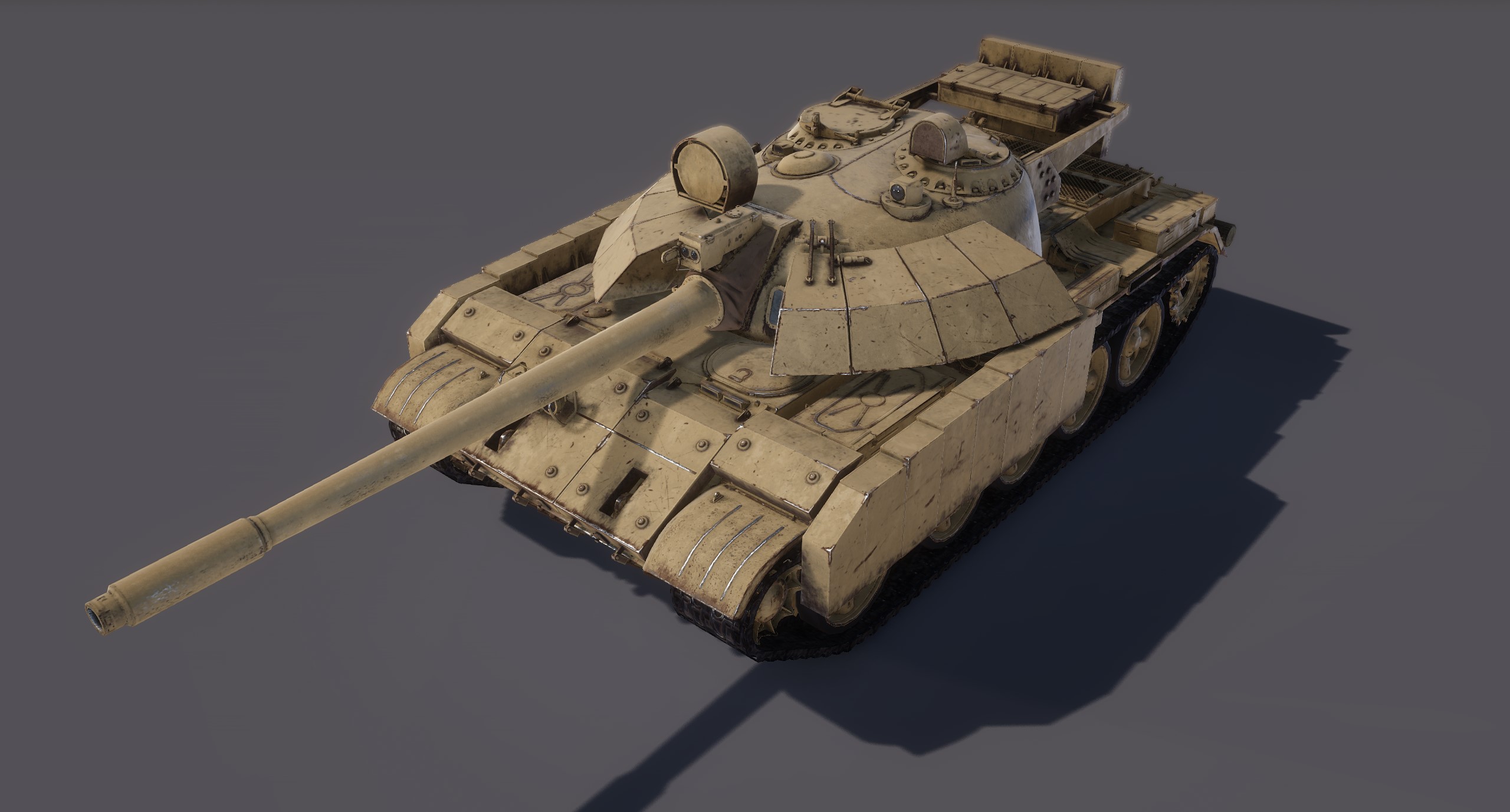 Regardless, at least five Enigmas are confirmed to have been knocked out by the Coalition forces and were subsequently recovered as military trophies. The most famous one is in Bovington, another one is in Aberdeen and the third one is in Fort Knox – the other two are allegedly in France and Kuwait. After the end of the Gulf War, the Enigmas were never used again and became one of the better known symbols of that particular conflict.

In Armored Warfare, we decided to give the tank a benefit of doubt when it comes to the performance of its armor, making it roughly equal (if somewhat inferior) to that of the T-55M1 and putting it somewhere between the T-62 and the IS-7. Naturally, there is a price to that – the Enigma will have reduced mobility when compared to the Tier 2 T-55, making it one of the slowest and least nimble MBTs around. The firepower will, on the other hand, be adequate to Tier 3.

We hope that you will enjoy playing this vehicle and will see you on the battlefield!

Warlords of the Wasteland – Home Stretch