The Sprut-SD is a Russian airborne tank destroyer, developed in the 1980s for the Russian Airborne Forces (VDV). Its name means “Octopus” in Russian, although it is commonly (and more poetically) translated as “Kraken.” Much like the other modern vehicles intended for VDV, it had a long development history that was riddled with issues, resulting in multiple delays and ending with a small production run. 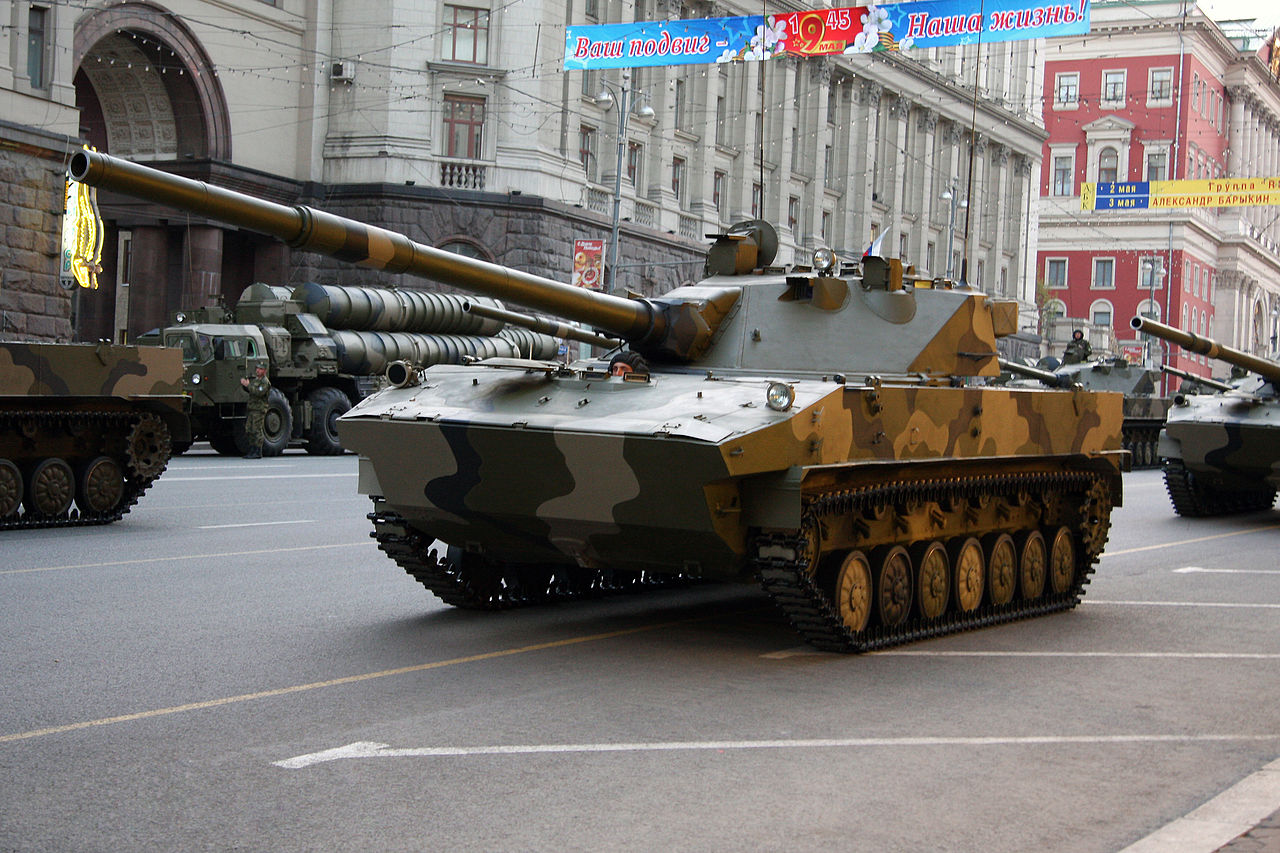 The Sprut was born in the same age and using the same thought processes that had been previously used to develop the BMD-1 – they are described in detail in the appropriate article, but, to sum them up, the nature of any airborne forces implies aggression and drops deep behind enemy lines. During such operations, the airborne can, naturally, encounter enemy tanks or other hardened targets – the idea behind the BMD series of vehicles was to give the airborne a small, air-droppable vehicle with a lot of firepower (comparable to the BMP-1 and BMP-2) that would be able to take such targets out with ease.

But, as the hype surrounding the 73mm Grom smoothbore cannon died and it was found out that the weapon has serious issues when dealing with armored targets, alternative ways were sought to increase the firepower of airborne forces. One way was, of course, further enhancement of the BMD firepower, resulting in the BMD-2 and, later on, in the BMD-3, described in the following articles:

There was, however, another way – not nearly with as many proponents and nearly abandoned, but it was there nonetheless – to develop an amphibious cannon-armed air-droppable vehicle with low weight to deal with the threats the BMDs could not – essentially a Light Tank.

Russia of course had plenty of experience with Light Tanks in the form of the wartime ones and the post-war PT-76, but the class was a dying breed, being gradually replaced by IFVs – after all, everyone thought that the 73mm smoothbore and Malyutka ATGM combination would make any Light Tank obsolete. And they were right, to a degree – but the Light Tanks were still on the mind of influential World War Two veterans like Marshal A.A.Grechko. Plus, the solution was generally quite cost effective - after all, the price of a single shell has always been much lower than that of a guided missile.

The last hurrah of the true Light Tank class was basically the PT-85 prototype designed to replace the PT-76, but the idea to build a modern Light Tank lingered on, although it had shifted somewhat – specifically towards the fire support needs. This was a departure from the traditional role of Light Tanks to a degree, although the difference was mostly tactical – in reality, the next project in line of light tracked vehicles armed with a main caliber gun, the Object 934 “Sudya” (developed in the 1970s) could pass both as a light tank or a tank destroyer.

The truth was, not even the Soviets knew what they wanted at that point – the entire project ended in failure due to a number of disagreements between various Soviet entities that all wanted to have a say in what the next such vehicle would be like. Ultimately, the project was closed due to the fact that the thinning Soviet resources were poured in to the Object 688 instead (which would eventually become the BMP-3).

The whole Object 934 mess, however, gave the whole light tank business a new direction – fire support. By the mid-1980s, the NATO armored forces were armed with such formidable MBTs as the Leopard 2, Challenger or the early Abrams. Against these steel behemoths, the once mighty BMD-1 was powerless – their thick hide could not penetrated by its weapon systems, or at least not reliably so. It looked like the capability of the Soviet airborne to carry out its tasks was in jeopardy.

Not all was bleak for the Soviets, however. When the new Ilyushin Il-76 plane became available, it came with a number of advantages, including its considerably increased loading capacity. The Soviets were thus able to transport considerably heavier vehicles. In a reaction to that fact, a unified chassis was proposed in 1982 with a number of vehicles, including a self-propelled anti-tank gun, capable of taking out even the heaviest enemy MBTs. 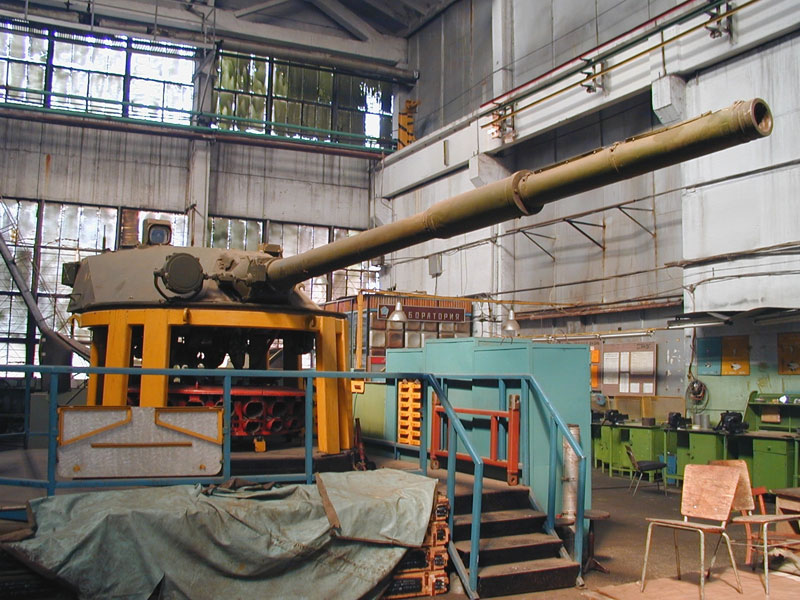 The concept was liked and the same year, a preliminary research project was started to develop a SPG armed with a 125mm smoothbore gun – the same gun the Soviet tanks had been armed it since the 1960s. This research project was approved for further development on July 29, 1983 with the goal of building such a weapon system on the upcoming chassis that would be shared with the future BMD-3 vehicle.

The TSNIITOCHMASH designers were responsible for the initial phase of the project, including the selection of the future chassis, quickly found out that they could really use the chassis of Object 934 “Sudya” and requested one of the three Object 934 prototypes to be handed over for modifications. This request was granted in 1983 and, using it as a base, a mock-up of a self-propelled 125mm gun built between 1983 and 1984. Several variants were considered, including a casemate style tank destroyer or an externally mounted weapon system, but in the end, a classic turret-based variant won. Preliminary trials with the mockup have shown that the accuracy of the gun using such a light chassis was not worse than on an MBT and the project was greenlit for further development and trials, receiving the name Sprut-SD (GRAU designation 2S25).

The project requirements were finalized in 1984 and passed to the main developer. The official purpose of the project was stated to be “a new 125mm self-propelled anti-tank gun for the airborne forces”.

For its 18 tons, the vehicle was quite impressive – the chassis, based on the Object 934, was made of welded aluminum with only some places reinforced by steel plates in order to keep the weight as low as possible. Protection levels did, naturally, reflect that fact – the vehicle was protected as such:

For a vehicle of this category, this was not really a problem since the Sprut was not supposed to be shot at with anything bigger anyway. For additional protection, there was a NBC protection system and 902B Tucha smoke grenade launcher, firing 81mm 3D6 grenades.

The really impressive part was, however, that the Sprut-SD was capable of accurately firing its mighty 125mm 2A75 L/48 smoothbore cannon (a modified version of the standard Russian 2A46 tank smoothbore). This was no small feat for such a light chassis – the recoil of a MBT-class gun can be devastating to such vehicles, cracking mounts and damaging suspensions. The initial version had a muzzle brake, but this was not enough – in the end, the issue with recoil had to be solved with:

The gun was loaded automatically from a two-layer carousel below the turret (the ammunition is, like in other Soviet tanks, split) and allowed for a rate of fire of 7 rounds per minute. The gun was fully stabilized and could fire any standard 125mm ammunition, including the Refleks gun-launched ATGMs. The vehicle carried 40 rounds of ammunition, 22 of which were loaded in the autoloader carousel. The standard loadout was 20 HE, 14 APFSDS and 6 HEAT or ATGM shells. 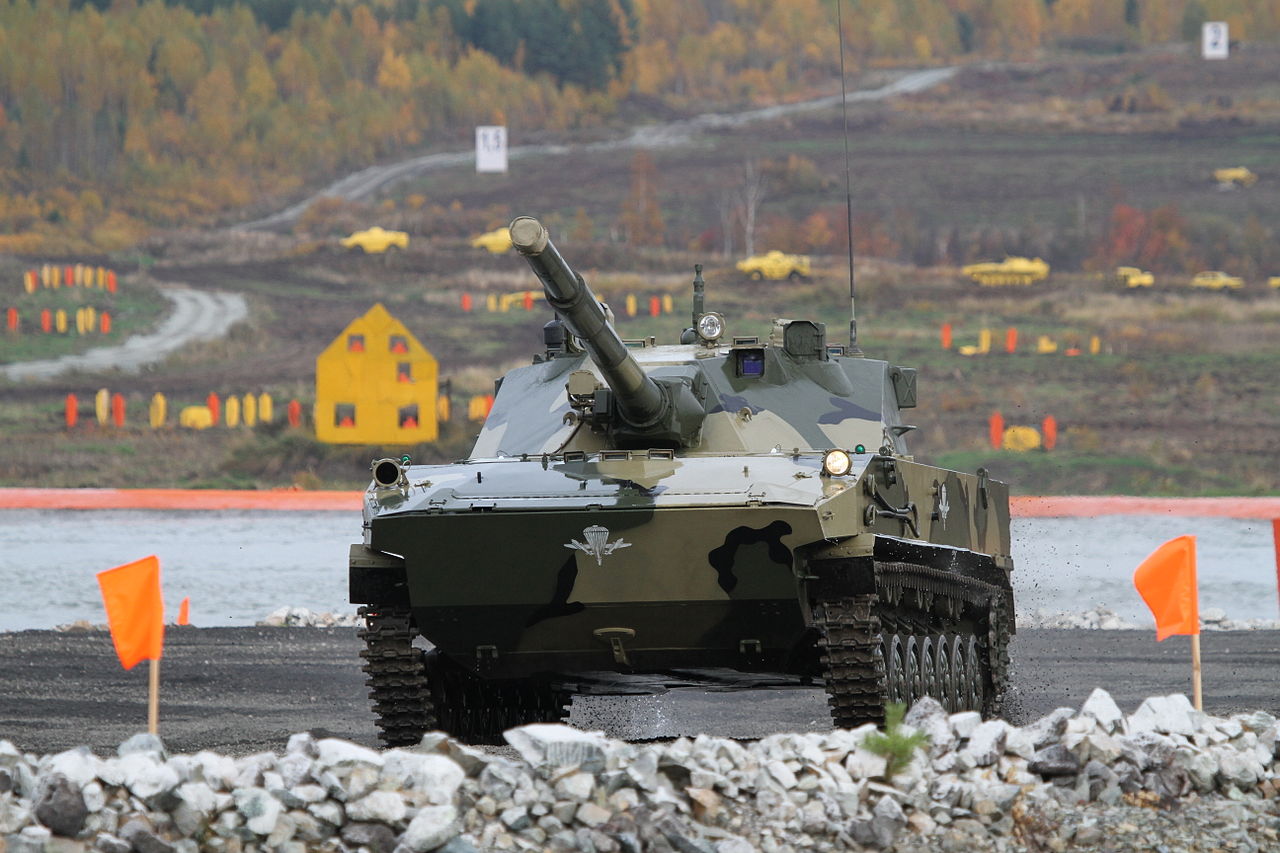 The gun could elevate to +15 degrees and depress to -5 degrees (-3 to +17 degrees when facing backwards). It’s worth noting that the Sprut-SD was amphibious and the gun could also be fired when it was swimming (but only when facing forwards or to a maximum of 35 degrees from the vehicle axis).

The vehicle had a crew of three – the driver (sitting in the hull), the commander and the gunner (both sitting in the turret). The gunner could use his 1A40M-1 day sights to aim the gun – the sights had an integrated rangefinder and a ballistic computer. For night operations, there was the TO1-KO1R system with TPN-4R sights, allowing him to see at roughly 1.5km. The commander had the 1K3-13S optics system at his disposal, allowing him to see both during the day and at night.

The main development ran between 1984 and 1991 when the state trials took place. Overall, the project was received positively – but there was a problem with its airborne delivery system – a major issue for a vehicle that was intended for airborne forces. And, of course, then there was the fall of the Soviet Union, the bane of many advanced Russian projects. In short, the Sprut-SD development ground to a halt.

There isn’t all that much information about what happened with it in the 1990s – the project was not cancelled, but it was stuck in development hell due to the issues with the P260 system (that was based on the P235, used in the deployment of the BMD-3 AFVs). Finally, in 1994, the Russians gave up on the P260 and started developing a new, platform-less system called P260M. The development took several more years until the system was ready in roughly 2001.

After another round of state trials (nearly a decade after the original ones), the 2S25 Sprut-SD was finally accepted in Russian service on January 9, 2006. The vehicle was actually mass-produced between 2005 and 2010 with a relatively small number of these vehicles built (36-40 pieces are the most commonly stated number), but by 2010, the production stopped and a modernization program began – after all, at the time, the vehicle was two decades old. The modernization program resulted in a prototype called Sprut-SDM with several improvements, the production of which is planned for the future. 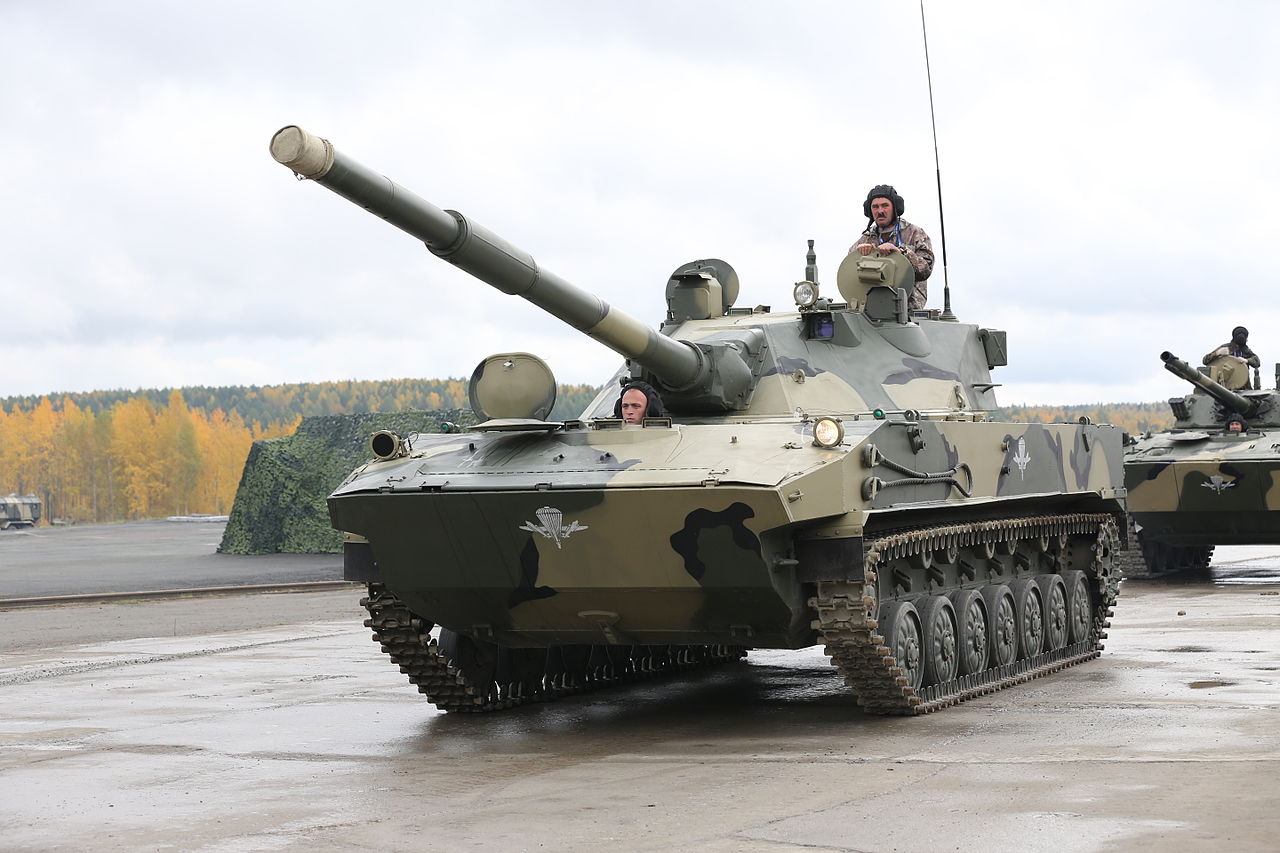 Currently, the Sprut-SD remains only in Russian service and was never used in combat. Given the recent use of Russian forces abroad, this might, however change in the future.

Finally, there are two development modifications of Sprut-SD worth mentioning:

In Armored Warfare, the Sprut-SD will be a Tier 8 Tank Destroyer. It will be a quite mobile vehicle (even though its maximum speed will be inferior to other vehicles it will encounter in battle) with some of the best firepower of its class and tier. It will be able to fire guided missiles. Compared to the Dragun 125, it will offer less mobility but more firepower, accuracy and stealth at the expense of protection. Its commanders will be required to think ahead as it will take some time to the intended destination due to its lower maximum speed, but once there, moving from position to position will be easier thanks to its solid mobility.