In our previous article, we’ve discussed the upcoming Battalion features, including the Recruitment system and internal Battalion trading. Today, we’ll take a look at the feature you’ve been asking about the most and the reason why, in Update 0.30, finding (or founding) a Battalion will really pay off – a special Tier 10 Premium AFV called Shadow RST-V. 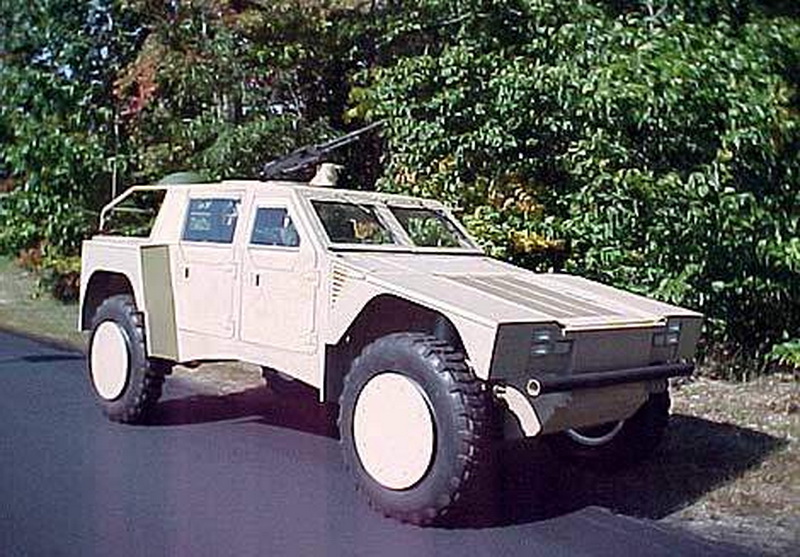 As usual, let’s talk shortly about the history of the vehicle itself. The RST-V abbreviation stands for “Reconnaissance, Surveillance, Targeting Vehicle”. It was an attempt to build something truly advanced for the Special Forces guys and the U.S. Marines to use as a fast attack and recon vehicle.

In the 1990s, these units were using modified M151 jeeps, Humvees and other more exotic vehicles (such as modified Mercedes G-series) to do the job. Neither of those vehicles was, however, tailor-made for the role and usually required some (quite extensive) modifications.

The famous DARPA laboratory, in cooperation with the U.S. Marine Corps and the U.S. Navy, funded a General Dynamics Land Systems project to create a light assault and recon platform that would combine the 21st century recon capabilities with low weight, stealthy movement, high speeds and, of course, durability. At the same time, the vehicle would have to be light to fit into larger helicopters in order to match the transportability of the earlier platforms.

The result of this line of thought was the launch of the RST-V Shadow project in 1999 with four prototypes being delivered by GDLS in 2002 and extensively tested until 2004.

The Shadow prototype shape roughly resembled a Humvee, even though the vehicle was made to look very futuristic with sharp angles pretty much everywhere. It could carry up to six men (the standard crew was four), was 5.45 meters long (almost a meter longer than the Humvee) and 2.06 meters wide in its deployed form.

Some parts, such as the mudguards, could, however, be folded in order to reduce the width of the vehicle even further (by another 40cm) for easier transportation. The Shadow also had higher clearance than the Humvee (by four centimeters) when deployed. What it also had was a pneumatic suspension that could be used to reduce its clearance to mere 10cm, allowing it to be transported in a V-22 Osprey. This is what that noticeable arch on the bottom of the vehicle is for – to allow it to cross ramps to get into smaller aircraft. 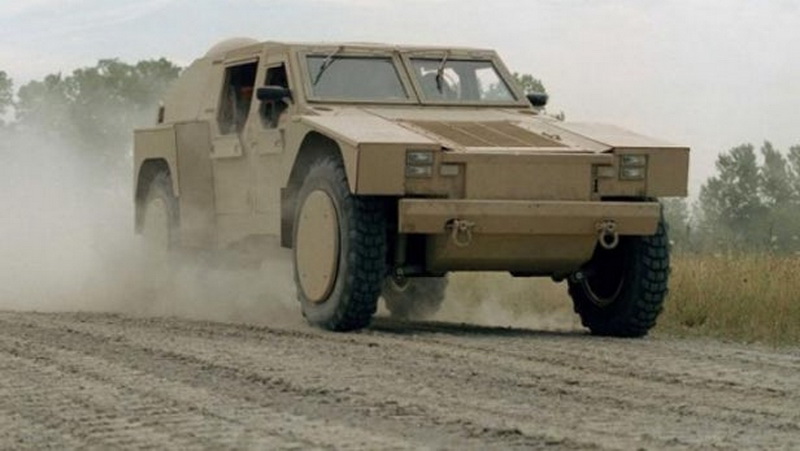 The combat version weighed 3.6 tons, although this was without a weapons station. The basic vehicle was unarmored with its body made of aluminum, although bulletproof glass and extra armor protecting it against small arms were available, as were other defensive measures such as a laser warning system.

What made it truly unique, however, was the propulsion. Instead of a massive engine such vehicles usually sport, the Shadow was powered by a hybrid drive. A 2.5 liter Detroit Diesel engine (rated at 150hp) powered an electric generator, which in turn either charged the vehicle’s on-board batteries, or powered four electric motors, one installed in each of its wheels (that is why the wheels have those massive hub covers). Combined, this system provided the maximum power output of roughly 200hp, which – at first glance – might not seem as that big of an upgrade over the 190hp 6.5 liter turbo-diesel of the Humvee, but it had numerous advantages.

First, electric motors offer a lot of instant torque, which in turn meant a lot of acceleration. Where it took a Humvee roughly 25 seconds to accelerate to 100 km/h (providing it was not fully loaded), the Shadow could do it in 15 seconds. Its maximum speed was roughly the same as the Humvee – 112 km/h.

Secondly, the fuel economy of such a system was much improved (by 25-50% up to some sources). But, most importantly, there were two very interesting traits no other systems could offer.

The Shadow could also switch to an electric-only mode by running on batteries alone. This made it very, very stealthy due to the lack of heat emissions from its engine and, of course, the missing distinctive engine sound that could be heard at long distances. In this mode, the range was (for obvious reasons) reduced from the standard 750km to mere 32km, but that was deemed enough for it to be able to creep up on unsuspecting enemies and either ambush them or spy on them using its cutting edge electronics.

And last but not least, not requiring a central gearbox for the electric motors, the polarity of each engine could be switched. This effectively meant that with one side rotating one way and the other, the Shadow could turn on a dime, much like tanks with neutral steering. Quite handy for those hairy situations where you need to get away very fast since recon intelligence is only valuable as long as it actually reaches your commanders. 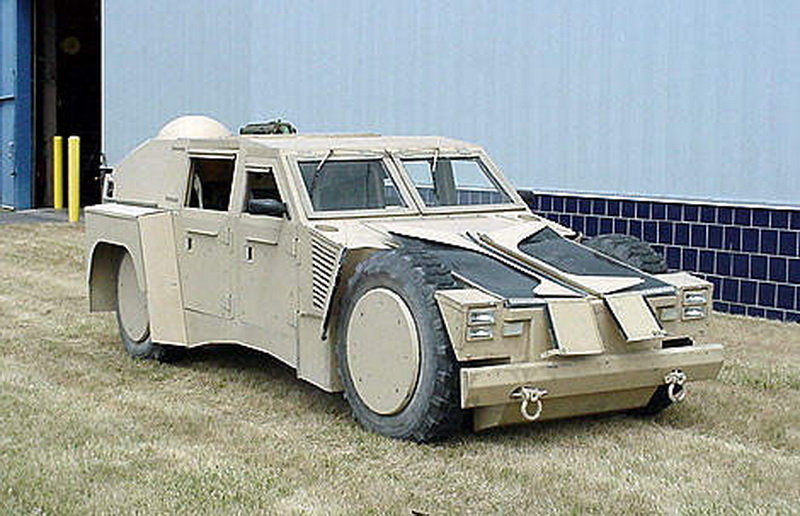 In summation, the vehicle was fast, extremely agile and stealthy. That that’s not all there was to it – it featured a cutting edge suite of recon electronics to boot. These would be installed in a retractable three-meters-long mast in the rear of the vehicle. The recon system included:

Additionally, the vehicle carried an advanced GPS system as well as a satellite communications device.

As for its armament, the Shadow was designed to carry a wide assortment of lighter weapons, ranging from machineguns (7.62mm, 12.7mm), over an XM307 automatic 25mm grenade launcher up to TOW and Javelin ATGM launchers.

The 2004 tests were largely successful and, in 2005, General Dynamics Land Systems received a contract to upgrade the Shadow based on their results, including modifying the electric generator so that it could be used to power external objects and in 2006, one or more Shadow prototypes were allegedly sent to and tested in Iraq for three months.

And that’s where its story abruptly ended. During the years that followed, the Shadow was sporadically mentioned in connection with the JLTV program (“Joint Light Tactical Vehicle”) that was launched in 2006 to replace the old Humvee in pretty much every role within the U.S. military, but it would not appear as a serious contended during its run that ended only fairly recently with a victory for another company, the Oshkosh Corporation. The Shadow was likely defunded sometime after 2006 and will likely remain a prototype only. 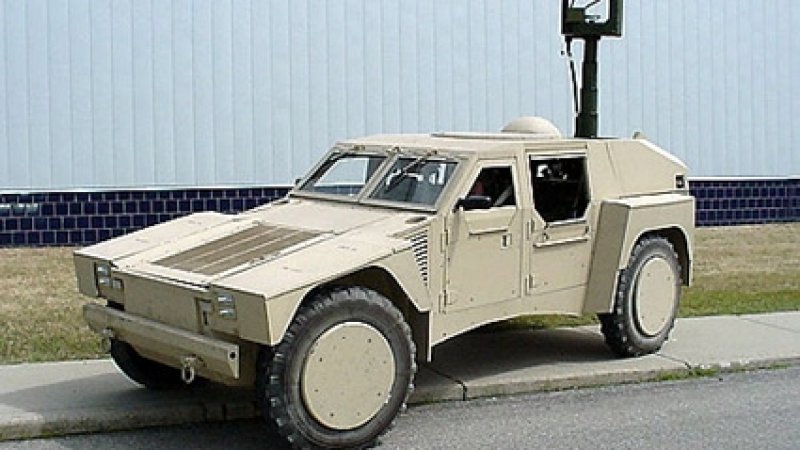 In Armored Warfare, the Shadow RST-V will be a Tier 10 Premium Armored Fighting Vehicle, obtainable as a new reward for Battalion Contract Missions. Players will get to collect its blueprints from Battalion Contracts reward Loot Crates and will be able to trade these blueprints between one another as long as they are a part of the same Battalion.

As its Battalion reward status suggests, this vehicle will be extremely useful as a part of an organized group of players but, at the same time, its usefulness in solo gameplay will be somewhat limited due to its very specialized nature.

But before we get into the specifics, please note:

With that in mind:

The Shadow effectively sacrifices pretty much all protection and a lot of its firepower to become the ultimate top Tier spotter in Armored Warfare. What this means is that it will not have any armor whatsoever since its aluminum hull doesn’t protect even against small arms. Hitpoint-wise, it will be possible to destroy it with one well-aimed HE shot.

The Shadow’s armament will consist of a single Javelin launcher, using the same locking and fire/forget mechanism as the Leclerc T40 does. Its top-attack missiles will be deal some damage but the vehicle will have the lowest damage per minute value in its Tier bracket. 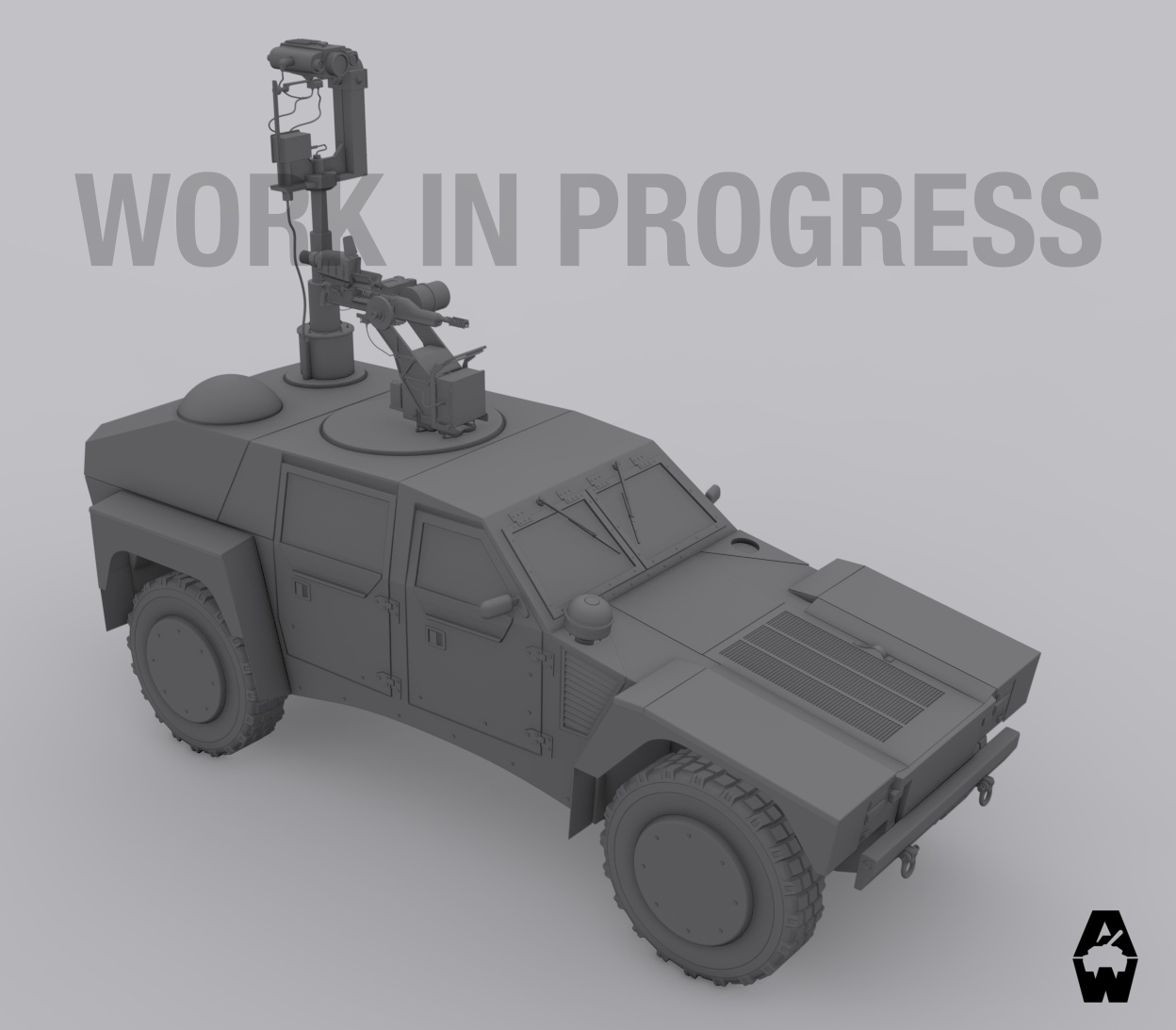 All this, however, will be compensated by this vehicle’s supreme stealth and mobility. The Shadow is a tiny vehicle, which means it is very easy to hide – and that’s before we take its stealthy electric drive into account. The Shadow will therefore start with a camouflage value of 40%, but that’s not all. Two special abilities will improve its chances to stay hidden even further:

For one, it will have a hydraulic suspension, allowing players to lower it to the ground. In this “low rider” form, the Shadow will see its camouflage improved by another 5%, will not lose any camouflage when moving at all and will become 60% harder to detect by enemy thermal imagers. And the best part? Its agility will remain the same. The downside of this mode will be the lowered maximum speed (to 50%) as well as 10 meter lower viewrange.

The second ability will be its passive jammer device on board, reducing the effectiveness of enemy surveillance systems. Simply put, all enemy targets within 200 meter radius from the vehicle will have their viewrange reduced by 10% (we are talking 40-50 meters in absolute numbers).

Speaking of viewrange, let’s talk about Shadow’s scouting capabilities. Not only will the Shadow have a great viewrange value on its own (440 meters), it will also – like other dedicated scouts – feature a Recon Package module, increasing its viewrange by another 60 meters when standing and giving it a major bonus to seeing the enemy through foliage thanks to its integrated Thermal Imager. In other words, the Shadow will feature the best stealth and viewrange values across the board.

And last but not least, there’s the mobility. The Shadow will be extremely light and fast with the best acceleration value in the game. Its maximum speed will be 112 km/h.

Additional progression unlocks will be available for the most dedicated of Shadow players, including:

All this will lead to a fairly unique playstyle of a vehicle that will be mostly dependent on others when it comes to damage dealing, but as a spotter, it will be without equal.

We hope that you will enjoy this Battalion prize and will see you on the battlefield!