In the future, we’ll be introducing a new progression Armored Fighting Vehicle – a heavy wheeled armored car from South Africa called Rooikat. Unlike other vehicles of its class, this one has quite an interesting development history. 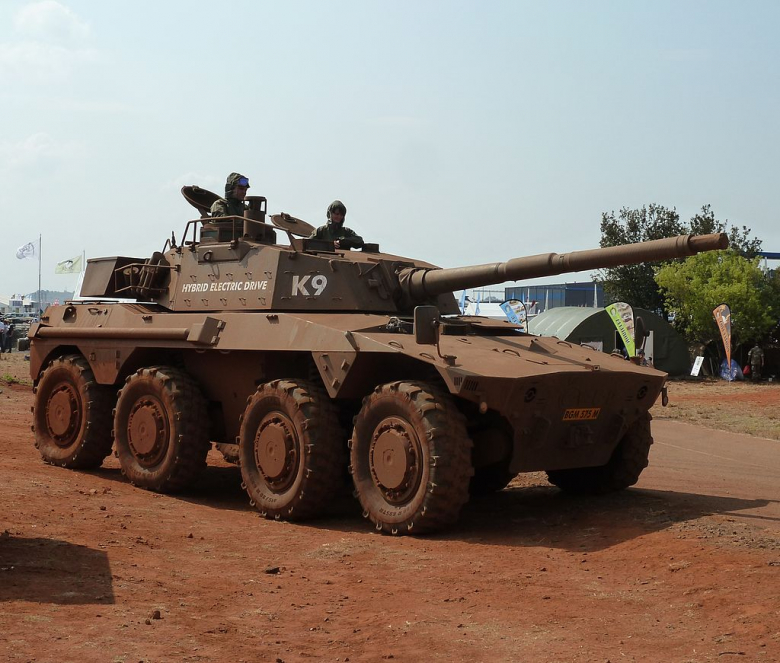 Most history books on post-war armor development focus on the clash between NATO and Warsaw Pact designs – but there were other conflicts around the globe. Many were essentially proxy wars in former colonies where both sides were supported by one superpower or another. One example of this was seen in South Africa.

There was conflict in the South-West Africa region, ruled in the early sixties by South Africa. A resistance movement called South-West African People's Organization sprung up (it was founded by Andimba Toivo ya Toivo and Sam Nujoma) and its militant wing, the People's Liberation Army of Namibia (PLAN), started conducting raids on South-African troops from its bases in Zambia from 1966 as part of an ongoing guerrilla war. In 1968, the region was renamed Namibia and with the 1975 independence of Angola, the guerrilla movement gained more and more power in the area until the war ended in 1990. South-African units struck back by attacking PLAN bases in Angola and the war, at times, became rather bloody. However, at no point were large heavily armored formations involved. The conflict was mostly in the guerrilla war category but the intensity grew during the seventies and eighties and it was then that Rooikat development began.

The war in Namibia was quite different from what military strategists in Europe were expecting. There was no threat from large enemy tank forces – the Namibian rebels had practically no armor. What they had were some obsolete T-34 tanks (a gift from Cuba, which supported the insurgency), some obsolete APCs and a larger number of various technicals and gun trucks, mostly armed with heavy machineguns and low-caliber automatic cannons of Soviet origin. There was no need for the South-Africans to deploy large numbers of tanks in such a conflict – what they actually needed was a vehicle capable of withstanding 23mm (or lighter) fire, since the guerrillas were especially fond of the 23mm ZSU-23-2 twin AA guns, used in a ground support role.

Sometimes the Rooikat vehicle family is referred to as "wheeled tanks" but this is essentially incorrect. It was never designed to fulfill the role of a main battle tank and going up against one with such thin armor would be suicidal and the same goes for certain duties traditionally reserved for tanks - such as line breakthrough missions. On the other hand, the vehicle was supposed to cover large areas so a large operational radius was one of the main requirements (even at the cost of increasing vehicle size to house additional fuel tanks). Size itself was not really an issue – the vehicle did not need to be stealthy because on the dry plains of Africa the biggest unmasking factor was the dust raised by vehicle movement, often visible for miles. As well as ambushes, the vehicle was to be used on combat patrol type missions and during movement the dust was a dead giveaway anyway. However, the large size of the vehicle could actually be helpful in overcoming various obstacles.

The South-African military did not insist on its new vehicle being amphibious (something both the American and Soviet militaries were insisting on) as there was no point in that: the rivers in Africa were either completely dry or (during the rainy season) so wild that they could not be traversed anyway. One thing that was very important to the South Africans was speed. The vehicle had to be able to pursue fleeing Namibian gun trucks and technicals so the vehicle was required to move with at least a speed of 100 km/h – this effectively meant that anything tracked was out of the question. Another advantage to the wheeled design was linked to the mines the Namibians were using. A detracked vehicle is immediately immobilized, while an armored vehicle with more than two wheels per side can keep on moving. As for the armament, the new vehicle was to be equipped with a 76mm to 105mm gun with powerful enough shells to knock out older armor and also to devastate various structures with high explosive shell fire. It was with these requirements that Rooikat development got underway. 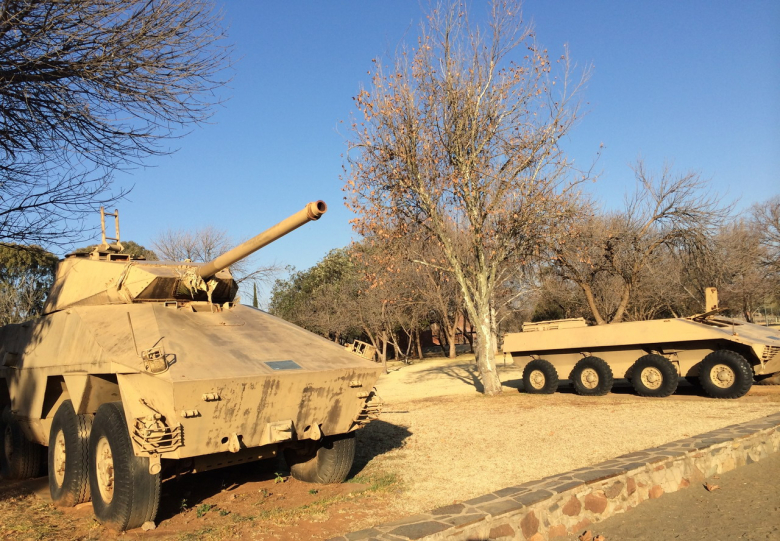 The development process started in 1976 with three different vehicles (all using the 8x8 wheel configuration) being presented to the South African military. The first was based on the Ratel IFV, the second on the Eland 90 (itself a modification of the Panhard AML 90) and the third on the Alvis Saracen armored car. All of these prototypes were armed with the 77mm HV gun (originally used on the British Comet cruiser tank in the Second World War). The 1979 tests of all these vehicles, however, resulted in failure (neither vehicle was able to satisfy army demands) and as a result the army started a new program called XDM (eXperimental Development Model). This program was to be concluded in the early eighties.

Numerous prototypes were considered, including:

Variants with frontal and rear engines were considered and, after a very difficult series of trials, the 8x8 Model 2B rear-engine variant was declared the winner, even though the 105mm gun was considered needlessly powerful. In 1985, another prototype of the vehicle was ordered, this time with a 76mm gun and the plan was to conclude the trials by October 1988. This model was named Rooikat (Caracal in Afrikkans). Five prototypes were built and factory-trialed during the next development stage (named AMD – Advanced Development Model). Phase three (EMD - Engineering Development Model) followed and consisted of four 0-series vehicles intended for official military trials. The EMD phase also aimed to fix any remaining details and issues and to prepare the vehicle for mass-production.

The 28 ton vehicle suspension was of the 8x8 type (although the driver could select 8x4 drive instead) with special attention being paid to driving over landmines – the Rooikat could keep moving even if it lost two wheels on one side. The vehicle was made of steel and could resist Soviet 23mm shell fire. It was powered by a 563hp 10-cylinder turbodiesel engine with 6-gear automatic transmission and could reach up to 120 km/h. It was armed with a 76mm L/62 GT4 gun (based on the OTO Breda Compact design). Using tungsten-core 1610 m/s muzzle velocity APFSDS-T ammunition, this gun could penetrate T-54/55 and T-62 armor from any angle at 2000 meters (its maximum range was 3000 meters).

The Rooikat was produced by the company Reumech, which had earlier produced the 6x6 Ratel IFVs. The turrets were produced by LIW (part of the Denel group). Reumech was the primary supplier, however, and was responsible for marketing and also attempted to offer the vehicle to foreign customers. The first mass-produced Rooikats were built in 1989 and officially entered service in the South African army in 1990. 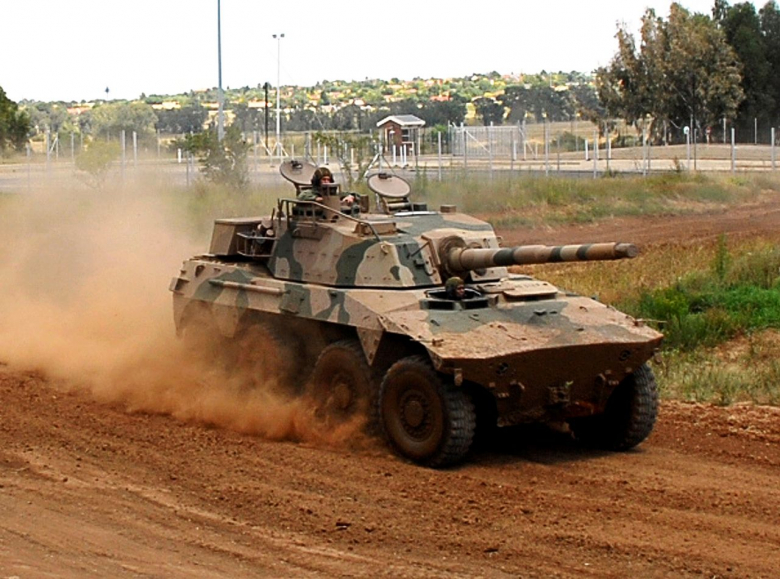 Times, however, had changed during the 15 years of development. Namibia had received its independence, the war was over and there were far heavier and more dangerous armored vehicles in the region. So Rooikat tasks were adapted to the new situation. The vehicle was now to be used for deep raids into enemy territory and for fast flanking maneuvers, attacking behind enemy lines and disrupting the supply chain.

Despite this change of purpose, the Rooikat remains an effective fighting vehicle practically to this day. There are multiple variants of this heavy AFV, including a 105mm tank destroyer, an anti-aircraft vehicle project and a specialized recon variant. All these were generally offered for export after 1990 but with little success. The market was flooded with surplus armor from Soviet stocks and many potential buyers went instead for the older but much cheaper Russian origin vehicles. The Rooikat was therefore produced in significant numbers only for the South African military and its only combat use to this day is the 1998 South African intervention in Lesotho. There are currently about 240 Rooikats serving in South Africa.

In Armored Warfare, the Rooikat will be a Tier 5 progression Armored Fighting Vehicle. The variant in the game will be armed with a 76mm gun. Due to its weight, it won’t be as fast as other AFVs of the same Tier, but it will feature relatively thick armor and high view range.

We hope you’ll like it and will see you on the battlefield!