But before we get to its in-game properties, a little background on it.

The T-54/55 series of tanks (and its foreign clones) is the most produced tank family in history with over a hundred thousand built over much of the 20th century. At the time of its introduction right after the Second World War, it was – without any doubt – one of the best Medium Tanks around, if not the best, but that was over seventy years ago since the first vehicles rolled off the assembly line in Nizhny Tagil.

The original T-54 underwent a series of improvements over the decades that followed, eventually evolving into the T-55 in 1958, but that doesn’t change the fact that, despite its numerous upgrades, the tank design itself is veritably ancient and practically worthless on modern battlefields.

But, despite that fact, it is still in service all over the world. During the Soviet era, thousands upon thousands were sold to the third world (often at a loss) in an effort to gain influence and many of these are actively used (including combat) even today. And there’s a good reason for it – the parts are cheap (even though not as cheap as they used to be), these tanks are easy to repair and maintain and, most importantly, their owners can rarely afford something better.

However, recent conflicts have shown us that even though these tanks can still bite, the proliferation of cheap Chinese, Russian and other ATGMs makes them incredibly dangerous to operate on any battlefield a superpower takes an interest in. Which brings us to the question many of their users have been asking themselves as of late – since they can no longer effectively operate as tanks, what should be done with them?

There are, of course, several approaches to this 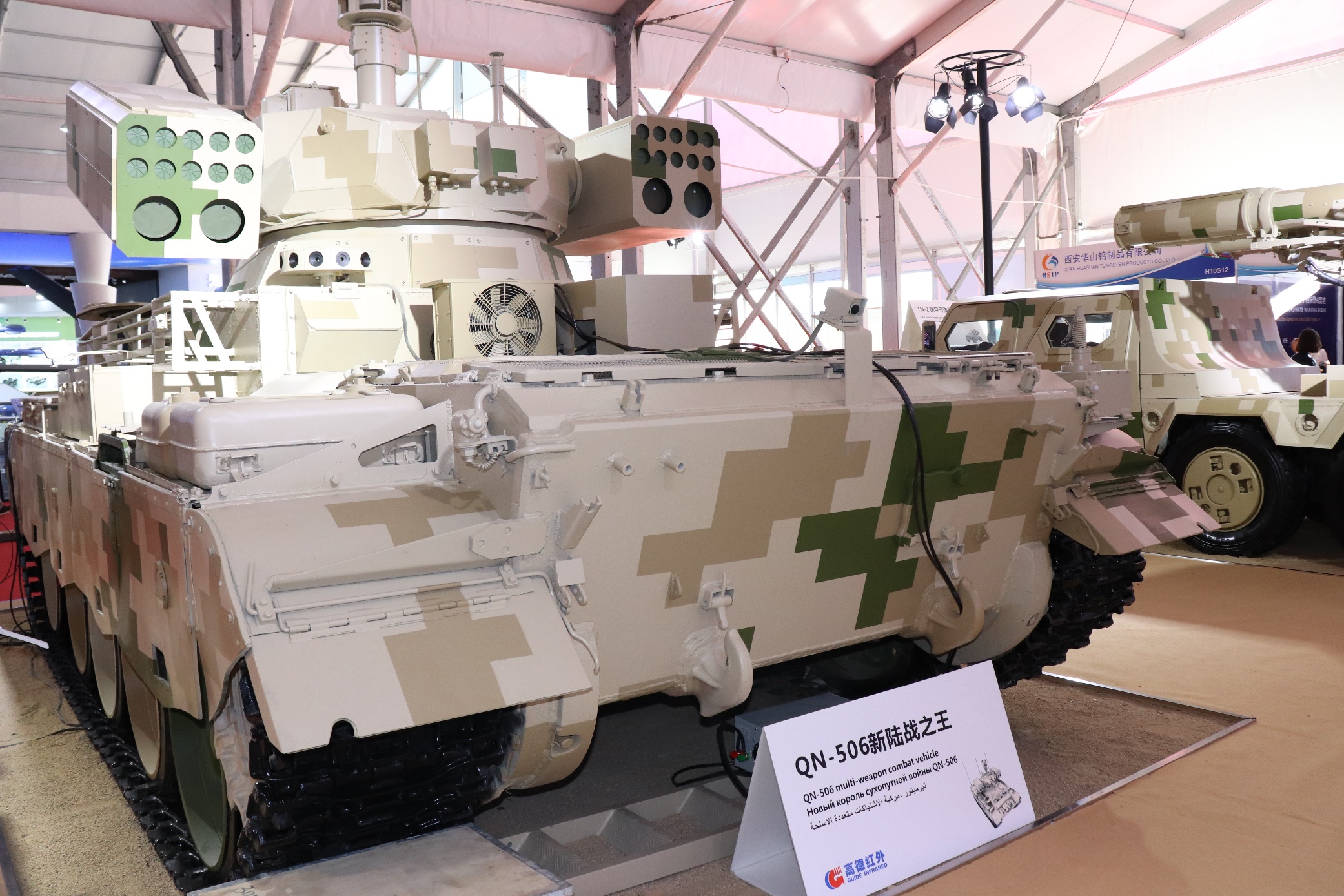 The most obvious answer is to just phase them out and buy something better. But, like we stated above, buying new tanks usually comes with some serious strings attached, strings that many countries attempting to appear as neutral would found unpalatable. Many simply cannot afford it and there are countries that no-one will seriously sell tanks to because to do so would mean to incur the wrath of someone powerful.

The second solution is to keep operating them as they are until they fall apart. This is actually quite viable for many of the least developed world countries simply because their potential enemies (usually their neighbors) have nothing better anyway and a T-54 is perfectly fine for anti-guerrilla operations where the rebels do not have any serious anti-tank weaponry. This scenario is practically exclusively restricted to Africa.

The third solution is to keep upgrading them but this is an approach that rarely pays off. Simply put, there’s only so much you can do with an existing tank as small as the T-54/55 series. You can’t put in a bigger gun without making it practically unusable (technically you can and 125mm T-55 prototypes did exist, but the result will be terrible), you can only upgrade electronics and FCS so much before the costs rise exponentially for only minor combat value gains. This topic was covered extensively in our earlier Retrofits in Real Life article but, long story short, it’s almost never worth it.

The last approach is to repurpose the tanks. Make something else from their component – a tractor, a heavy IFV – sky’s the limit. And that’s where we can start discussing the QN-506. The QN-506 is a commercial solution by Wuhan Guide Infrared Co., Ltd., transforming a T-55 series tank (specifically, in this case, the Chinese Type 59) into something like the Russian Terminator. 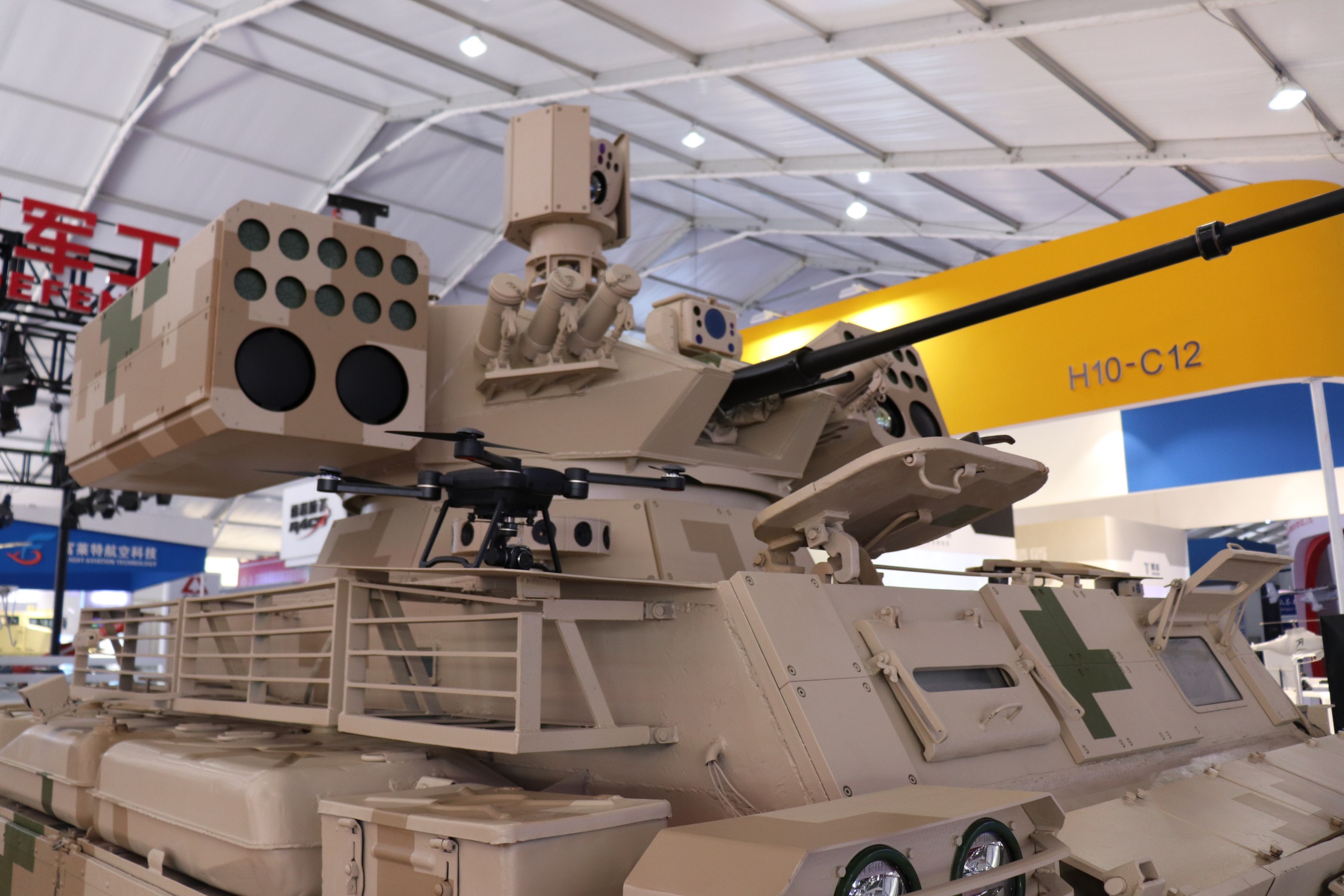 A prototype of this vehicle appeared in 2018 at AirShow China expo. It consisted of a modified Type 59 hull with an extra superstructure, housing an unmanned ZPT-99 turret with multiple weapons systems. These included:

The QN-502C ATGMs with tandem warheads can penetrate up to 1000mm of RHAe but these missiles also come in a top-attack version. The smaller QN-201 rockets can penetrate approximately 60mm of armor or 200-300mm of reinforced concrete. The autocannon APDS ammo can penetrate 120mm RHAe at 200m.

That’s quite a handful of weapon systems for the three man crew of this vehicle, which sits in the hull and has to rely on external cameras to see – the QN-506 carries two sets, one for close range and one for long ranges. The crew can also use a thermal imager and the vehicle’s panoramic sights.

The vehicle has also to rely on its offensive capabilities to survive because its steel-only armor will not protect it from modern threats. The protection levels of the QN-506 are incomparably lower to the BMPT series since it has, after all, only a steel hull. The vehicle does have, however, some advanced defensive electronics such as a counter-sniping device and some form of soft-kill APS in the form of a LWR connected to its smoke grenade launchers.

The entire vehicle weighs 30-35 tons (sources vary) and is powered by the Type 59’s 12150L 520hp diesel engine, giving it a mobility compared to the original MBT. 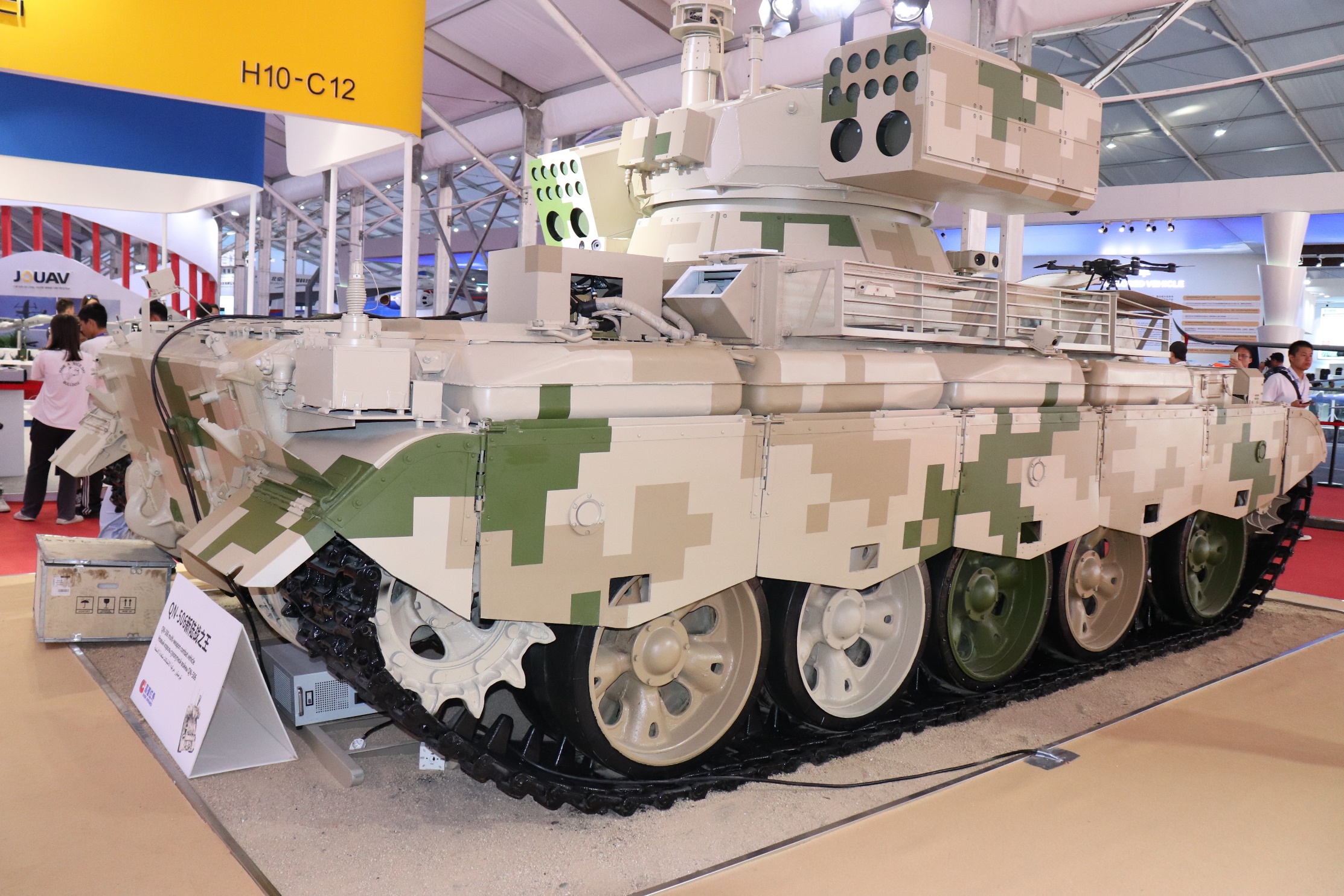 The QN-506 made the news not only by its somewhat wild appearance, but also by the outrageous boasts, not uncommon to the Chinese, who named it the “King of the Battlefield.” Unfortunately for it, it seems the project itself gained little traction despite its press coverage and has yet to find an interested customer because the Chinese themselves are not buying.

In Armored Warfare, the QN-506 will be a Tier 9 Premium Chinese Tank Destroyer. At first glance, it might seem like a Terminator vehicle built on a much weaker platform, but that’s not accurate at all.

Before we continue, the usual disclaimer:

It is true that the armor of the QN-506 will be considerably inferior to the BMPT series with plates of rather thin steel (for its Tier, anyway) and some weak ERA elements standing between the enemy and QN-506’s three-man crew. The survivability will, however, be enhanced by its unmanned turret that only takes reduced damage. 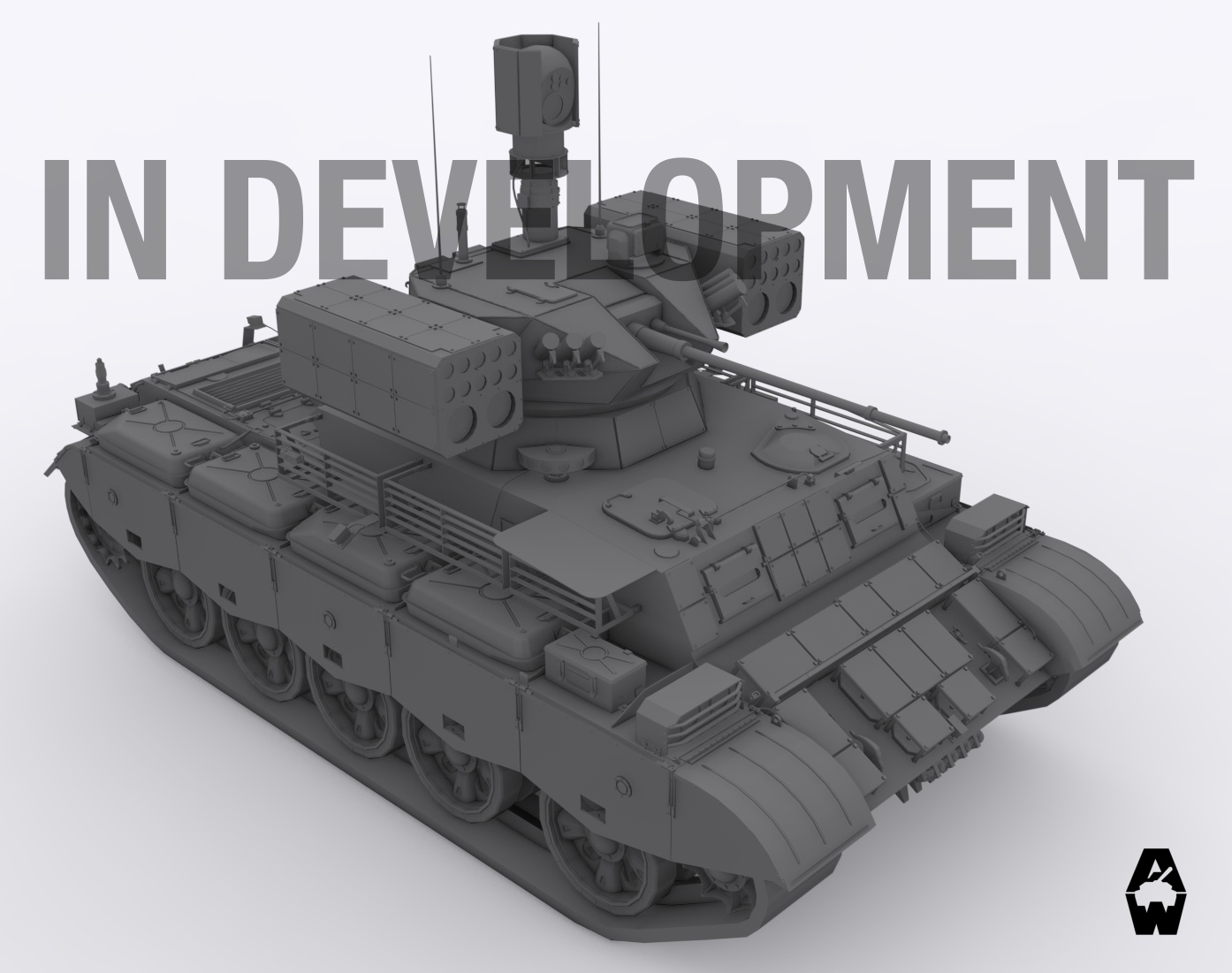 The mobility of this platform will not save it either – a 580hp engine with mediocre agility and the maximum speed of 60 km/h is, after all, nothing to write home about.

Where this vehicle will excel is, however, its firepower. The QN-506 will not have one or two but actually three different weapon systems:

But that’s not all. The vehicle will have a very special fourth weapon system in the form of the S570 loitering recon ammunition. Upon launch, this special missile will fly along the line of your aiming reticle towards the border of the map, spotting everything in its path (it will not be guided – once launched, it will just head forward).

The missile will have its own view range and line of sight so it will be possible to avoid it. It’s worth noting that unlike other such recon platforms in the game, this missile will be impossible to intercept or shoot down. Only four such missiles will be available with 60 second cooldown so one must carefully consider when to launch it and where.

The QN-506 will not be the best close-range fighter or the best sniper in the game. The true strength of this vehicle will be its ability to be absolutely universal. It will be able to take on practically any role successfully as long as you mind its weaknesses, making it one of the most versatile vehicles in the game.