One of the more common pieces of feedback for low-tier vehicles is the general underperforming of the PT-76 Tier 1 Light Tank. We have carefully reviewed its performance and decided to replace it with a more suitable vehicle called Object 906 or PT-85.

The Object 906 Light Tank was developed in the early 1960s in Volgograd (the city was named Stalingrad until 1961, which is why both names appear in various sources). The goal of the program was to update the aging PT-76 Light Tank with more firepower – the 76mm gun never really packed much of a punch and 15 years after the end of the war, it truly was quite obsolete. It’s not that the tank was supposed to fight enemy MBTs – it wasn’t, but the 76mm shells did not offer much in the way of high-explosive firepower either and that was a problem.

As a result, a number of light tanks were proposed to replace the aging vehicle. One of them was a proposal by the VTZ (Volgograd Tractor Plant) that, under the leadership of I.V. Gavalov, designed quite a modern successor to the PT-76. The development started in 1960 and six prototypes were built from 1961 to 1962.

As its name suggests (PT stands for “Swimming Tank” in Russian), the tank was fully amphibious, a trait that had much influence on the vehicle’s overall shape and design. Simply put, it was a Russian thing. It’s not like other nations didn’t put the amphibious requirement to their vehicles at all, but the Russian PT series light tanks were literally designed around it with the doctrine putting a lot of emphasis on opposed river crossings.

This requirement also meant that the vehicle had to be light. Indeed, it weighed only 15 tons. It was nearly 2 tons heavier than its predecessor, but it was also longer (9,4m long compared to 7,6m of the PT-76) and somewhat taller – interestingly enough, it could, however, be transported by the Antonov An-12 cargo plane.

This low weight was achievable by using aluminum for its electrically welded hull – specifically the ABT-101 alloy. The turret was made of 2P armor steel.

The armor was of the following thickness:

It wasn’t much, but the armor protected the crew from 14,5mm AP bullets (B-32) at 100 meters (or more), while the sides were only resistant to 7,62mm AP bullets (at 350 meters or more for the hull, any distance for the turret). In other words, at close distances, the vehicle was vulnerable to assault rifles, let alone anything larger. On the other hand, it was an upgrade over its predecessor. The vehicle was also protected by the Rosa automatic fire suppression system, a smoke generator, an emergency water pump to keep it afloat even when damaged while swimming and a NBC kit – it was specifically designed to survive an atomic blast (at certain distances anyway) with an automated system capable of quickly closing its view port shutters.

The biggest improvement, however, was its firepower. Instead of the old 76mm D-56T gun, the vehicle carried an 85mm rifled gun called D-58. The gun had a two-axis “Zvezda” stabilizer, a fume extractor around the middle and a muzzle brake at the end. The stabilizer made it quite accurate, both when moving on land and when swimming.

The gun could be elevated to +20 degrees or depressed to -5 degrees and was, to a certain degree, capable of indirect fire. For direct fire, the gunner (one of its three crewmembers along with the commander and the driver) used the TSh2B-8A telescopic sights in day time or the TPN-1 sights in night time. The gun was automatically loaded – the autoloading mechanism had a magazine for 15 rounds and its maximum rate of fire was 14 rounds per minute, the minimum one was 9 rounds per minute. The vehicle carried 40 85mm shells in total, of which 8 were armor-piercing shells and 32 were high-explosive shells. The muzzle velocity of the armor-piercing shell was around 1000 m/s and it could penetrate 185mm of steel at 1000 meters or 145mm of steel at 2000 meters. The maximum range for HE shell during indirect fire was 13,5km. 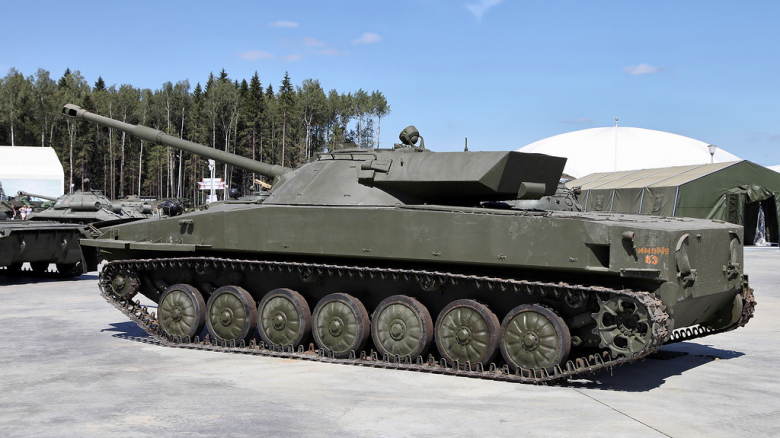 The first prototype was powered by a 8D-6M diesel engine (producing 300hp), while the other five prototypes received the more conventional UTD-20 diesel (also 300hp). They all, however, had pneumatic suspension (unlike the PT-76 with its torsion bars), giving them much smoother ride. The PT-85 was also much faster than its predecessor and could reach the speed of 75 km/h on land (and 10 km/h when swimming), while the maximum speed of the PT-76 was only 44 km/h.

Overall, it was a solid vehicle and two of the six prototypes underwent official tests from January to August 1963. It was, however, never accepted in service. There was no single major flaw in its design. It was more the entire set of its characteristics that doomed the tank. By the time it was ready, the Soviets were already hard at work developing another promising vehicle that would three years later become the BMP-1, which was more than capable of fulfilling practically all the roles the light tank was designed for, making it effectively obsolete. As a result, the PT-85 represented one of the last Soviet floating tanks before the entire vehicle class was replaced by amphibious IFVs and passed into obscurity. A single prototype (the very first one, with the 8D-6M engine) survived to this day and is currently owned by the Kubinka tank museum.

In Armored Warfare, the PT-85 will be a Tier 1 Light Tank, replacing the PT-76. Characteristics-wise, it will be positioned somewhere between the Type 62 and the M41, offering more speed but less armor than both these tanks. Its maximum speed will be a significant upgrade compared to the PT-76. Its 85mm gun will be comparable to Type 62 with higher rate of fire, but a little lower damage per shot.

We are proud to present the first preview of the newest addition to Armored Warfare - Update 0.23 “Caribbean Crisis"