Following the failure of the OA-82 Jarmila II development, the Czechoslovak army was in the early 1960s looking for a new, multi-role armored fighting vehicle. The only realistic variant, apart from the Soviet BRDM, which wasn't available due to limited production capacity, was the Hungarian FÚG. 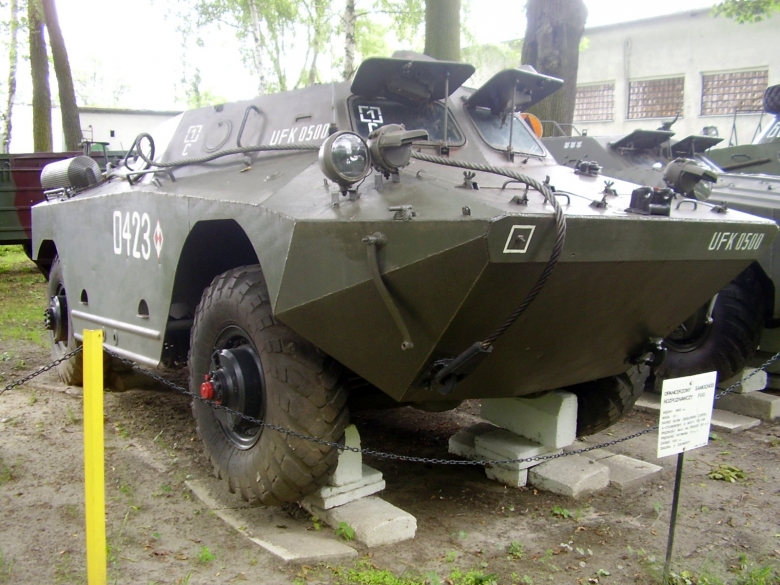 The D.442 FÚG (Felderítö Úszó Gépkocsi – amphibious recon vehicle) was a light multirole Hungarian armored vehicle, developed and produced by the Rába plant as a reaction to the Soviet demand that Warsaw Pact countries should develop light armored vehicles for themselves to replace the aging BA-64. The second reason for its development was the revival of the Hungarian military industry.

It was a Hungarian success where Czechoslovakia’s own Jarmila and Jarmila II development failed, which is why talks about purchasing this vehicle for Czechoslovak service can be traced back to its development in the early 1960s.

The FÚG was based on the Soviet BRDM-1, but it would be a mistake to call it a BRDM-1 variant. The vehicle was in fact completely overhauled. The biggest change was that the engine (Csepel D.414.44 5.5 liter 4-cylinder diesel engine, producing 100 horsepower at 2300 RPM) was moved to the back and the combat compartment was moved in its place to the front. The hull shape was also changed. The original vehicle did not have any armament, but the roof hatch of the combat compartment could be opened and the crew could fire small arms by leaning over the vehicle.

This was far from ideal, but the vehicle's role was supposed to be reconnaissance not combat. Its armor reflected that role – the hull was made from welded simple steel plates. The front of the vehicle was 12mm thick according to Czechoslovak military standards (some sources claim 13mm or even 14mm), the sides were 8mm thick and the roof and rear were 6mm thick, essentially only protecting the crew from small arms and hand grenade explosions. Anything bigger went through the armor like butter.

The vehicle was quite light (6.5 tons) and even the 100hp engine allowed it to go as fast as 87 km/h on the road and around 40 km/h off road. It had Csepel 450.44 type transmission with five forward gears and one reverse gear.

Mobility was further improved in two ways. First and foremost, the vehicle was amphibious and a pair of propellers allowed it to swim at 4 km/h (other sources claim 8-10 km/h). Secondly, two pairs of smaller wheels were installed on the bottom of the suspension to increase the vehicle's off-road capabilities even further. This, to put it mildly, wasn't exactly a great solution. The maintenance and vehicle crews both hated it with a passion as the mechanism was prone to getting stuck or – in the worst cases – the wheels just fell off and several such incidents were recorded.

In December 1963, two initial production run vehicles were brought to Czechoslovakia and thoroughly tested. The test results weren’t very satisfactory and resulted in a list of 68 upgrade proposals for the vehicle. Meanwhile, production of the unmodified design began in Hungary in 1964 and 114 FÚG vehicles of this early production run were purchased by the Czechoslovaks the same year. Further tests were conducted between January and May 1965 – at this point, the vehicle was still not officially in Czechoslovak service. The military was not overly satisfied with the design, but the changes eventually made it to the production line in Hungary. 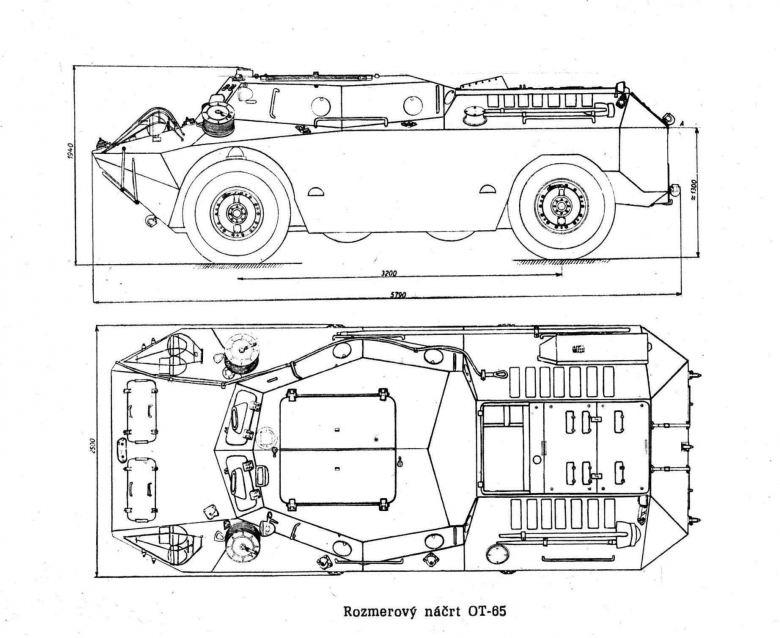 Thus modified, the vehicle entered Czechoslovak service in September 1965 under the designation OT-65. Czechoslovakia and Hungary became the only countries to use the first-hand FÚG in large numbers. Poland and Bulgaria used around a hundred in total. Between 1000 and 3000 (sources vary) vehicles had been built by 1969 when production ended.

Between 1963 and 1967, 842 OT-65 vehicles were imported, including the unmodified early production run vehicles. In 1967, the early production vehicles were taken to VOZ 026 military repair plant in Šternberk and refitted to an upgraded standard. The main change was an improvement in the frontal wheel geometry with the suspension tuned for less wear and tear and an overpressure system for transmission and brake drums to make them more durable when fording was also added. These modified OT-65s are referred to as OT-65R. 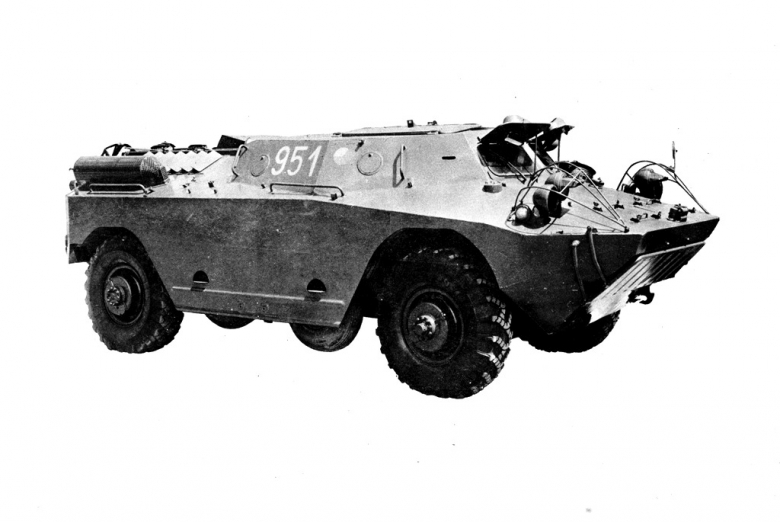 Production of an upgraded variant also started in Hungary under the designation OT-65M in 1967. These vehicles had the same changes as the OT-65R, but also received the following improvements:

There were other variants as well (including a command vehicle or a mobile artillery spotter post), but the most interesting variant was the OT-65A Vydra (Otter). It was originally based on the OT-65R and OT-65M. The main difference was the installation of an OT-62 turret armed with a machinegun and an 82mm T21 Tarasnice recoilless gun on the top of the OT-65 hull. 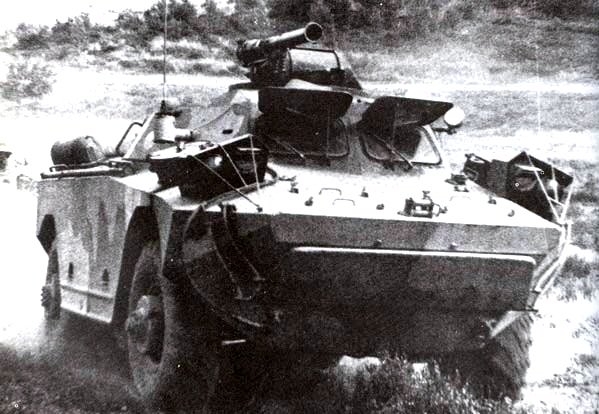 The T21 is a Czechoslovak recoilless gun developed in the late 1940s as an infantry squad-level anti-tank weapon. It was accepted into service in 1949, using the 80.85mm caliber, under the designation of Tarasnice vz.49. In 1950, it was renamed T21 and the caliber was changed to 82mm. The gun name comes from the medieval small caliber cannons used by the Hussite forces.

It was a powerful weapon for its time. It fired a 3.6kg HEAT round (designation Nb-T21) capable of penetrating the frontal armor of any tank at that time (penetration was rated between 200 and 250mm) and was very accurate at approximately 300 meters with a maximum direct fire range of 600 meters. It could fire indirectly at approximately 2500 meters. Muzzle velocity was 250 m/s.

The rate of fire was quite high. A skilled gunner could fire as many as 6 rounds per minute. It was mass-produced between 1950 and 1955 with 5150 built and it was widely exported. 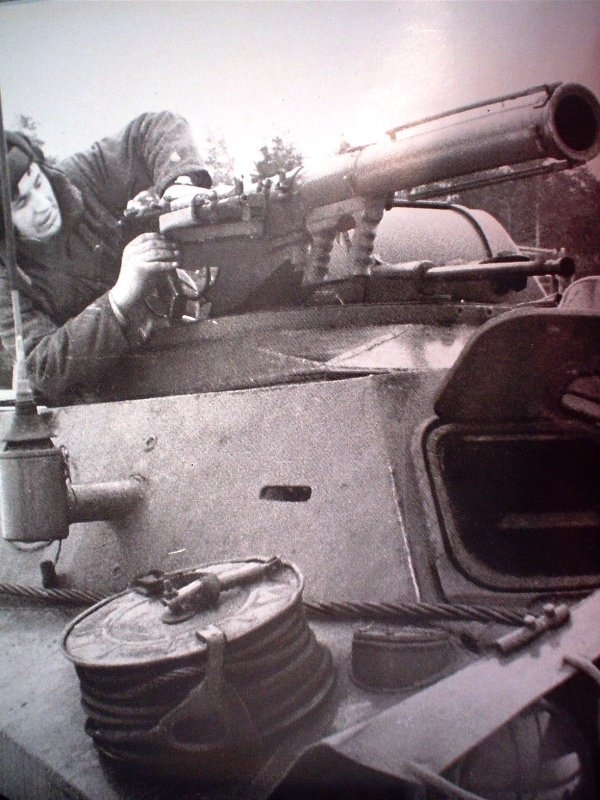 The turret on which it was installed originally belonged to the OT-62B TOPAS, but it was adapted for the OT-65. Like the vehicle itself, it only protected the gunner from small arms fire. The T21 was mounted on the right side of the turret, from where it could be fired as light cannon. Reloading required the gunner to lean out of the top hatch and to do it manually, not something that could be easily done on the move (it could, however, be fired from the inside). As a result, the reload time for the mounted version was quite long and the effective rate of fire was approximately one round per minute.

When standing, however, the T21 was quite accurate, especially if the gunner was skilled. A major drawback was the absence of an inert training round and the Czechoslovak crews used to blow up training targets much to the dismay of their operators – an accurate hit usually meant hours of fixing the training target mechanisms, such as the trolleys, which is why the OT-65s were always going last during firing trials.

With such an armament, the OT-65A Vydra served as a heavy recon vehicle. Its additional firepower allowed it, if required, to engage even heavily armored targets, although the odds of survival were definitely not in its favor. The turret installation also had its price – the weight of the vehicle was increased by nearly 400 kg to 6.9 tons and maximum speed was reduced to 80 km/h. 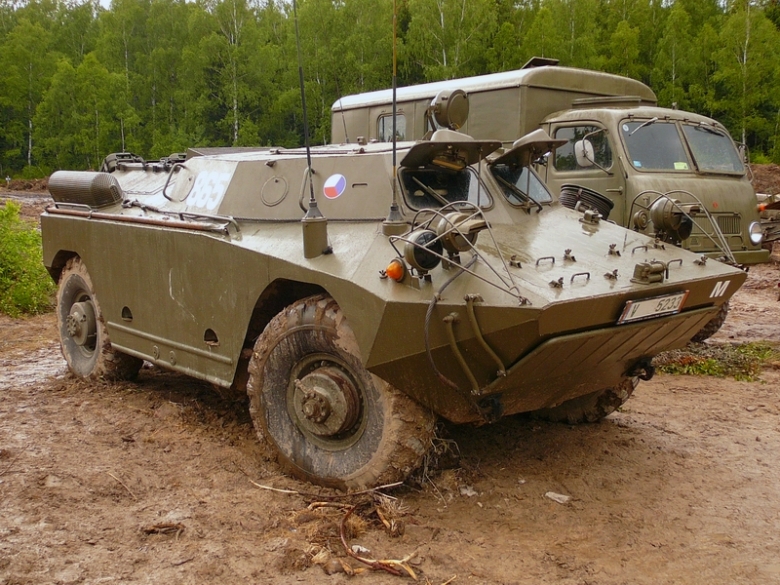 In Czechoslovak service, the OT-65A gained a bad reputation, especially for its poor reliability (something the extra weight of the turret definitely did not help). The additional wheels would get stuck, but the biggest issues concerned the engine and electric devices, which were constantly failing. For this reason, maintenance crews nicknamed the vehicle: Hungarian Revenge.

Apart from one specific incident, its three decades in Czechoslovak service were quite uneventful. It was phased out of service soon after 1990. It is unclear whether the OT-65A ever fired a shot in anger – some were sold to Iraq and it is possible that they were involved in the Gulf War and the Iraq War.

Many, however, have found their way into private hands since the fall of the Iron Curtain and they remain desirable and affordable military vehicle collector items.

Learn more about this upcoming Czech and Slovak tracked AFV