It is a widely known fact that the Soviet – or, more specifically, Russian – need to update the aging T-72 resulted in a heavily modernized derivative known as Object 188, or, if you will, the T-90 Main Battle Tank. However, as was often the case with tank development, there were more programs with the same goal in mind running in parallel. Object 187 was one of those programs. 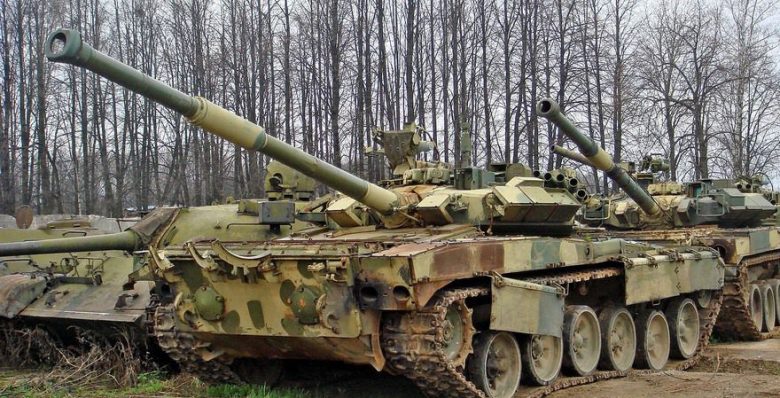 As with many late Soviet designs, the information available is rather sketchy. Development started in June 1986 at Uralvagonzavod as part of a research and development program called "Improvement of the T-72B", assigned by the Soviet Ministry of Defense on June 19 1986. Object 187 development ran practically in parallel with that of Object 188. As the program name suggests, its goal was to create a worthy T-72B replacement.

Both designs were actually based on the T-72, but Object 187 was the deeper modernization of the two. Unlike its sibling, Object 187 was actually the result of a company initiative rather than a specific ministry request. This was not very common in the late Soviet era as funding was generally quite tight, but Uralvagonzavod – being the producer of the T-72 – could afford things other plants or design bureaus could not. The design team was led by V.I.Potkin (he'd become famous for the T-90 "Vladimir" that was named after him) and the direct project supervisor was A.S.Sheglachev.

At first glance, Object 187 looks like other, older, Soviet era tanks, but there are some quite significant differences underneath its classic exterior. For one, the front of the hull was significantly overhauled. Earlier tanks, reaching back to the T-64, had the driver sitting right under the upper front plate with his hatch and optics integrated into it. Object 187's hull was extended and the driver was pushed further to the back – his hatch and optics were no longer part of the upper frontal plate, but of the frontal hull roof. This solution allowed for a redesign of the upper frontal plate itself, making it highly resistant to the shells used in the late 1980s.

The vehicle also received a new, welded turret. It was a modern feature, but not unique to this vehicle – at the same time, welded turrets were developed for Object 188 (by Uralvagonzavod) and the T-80UD (in Kharkov). The Object 187 turret variant was, however, larger than those developed for the other tanks. Apart from its composite steel plates, the turret was also protected by cutting edge ERA armor, allegedly a direct predecessor to the modern Relikt ERA kit, with the designation Malakhit. Additional protection was provided by a Shtora soft-kill APS and a 902A smoke grenade launcher system. 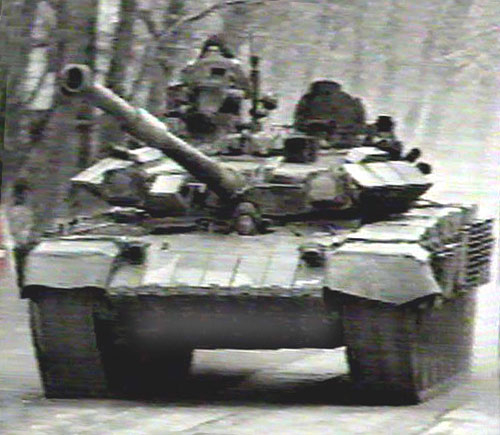 The vehicle was armed with a new 125mm 2A66 smoothbore gun, providing significantly more firepower over the older 2A46M of the T-72B. The most distinctive visual feature of this gun was the fact that, in contrast to other Soviet 125mm tank guns, it actually had a muzzle brake, making it easy to recognize. It wasn't actually a muzzle brake per se – it served more as a tool to divert the gasses of a gun-launched guided missile than to affect actual gun performance. A new, incredibly powerful depleted Uranium ZBM-39 "Anker" APFSDS shell was developed specially for this gun, allowing the tank to take out any threats on the battlefield. The gun was controlled by another cutting edge piece of technology, a brand-new Fire Control System that was believed, at the time it was created, to be the best system of its kind in the world. As for mobility, several engine and transmission combinations were tested on Object 187, including a turbine engine. The Chelyabinsk 1200hp A-85-2 engine was considered to be the most promising option.

There were six prototypes in total built between August 1988 and April 1991. They were built in three batches that significantly differed from each other.

The first series contained the first three prototypes (designated Object 187 sb1, sb2 and sb3). It was developed between June 1986 and 1989 with the prototypes built in August 1988.

The first two vehicles (designated Object 187 sb1 and sb2) were the most similar in layout to Object 188 (the future T-90). Both had a standard T-72-like cast turret but, compared to the existing Soviet MBTs, they had a prolonged hull front with improved armor slope, giving it better protection along with the previously mentioned driver shift toward the back of the vehicle. This allowed the designers to remove the driver hatch from the upper frontal plate, eliminating a weakspot. The vehicles were also fitted with a Kontakt-5 ERA kit. 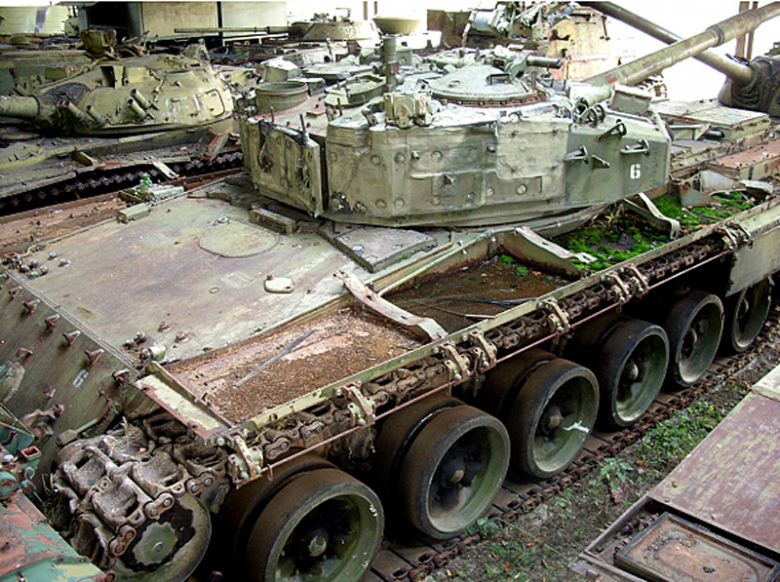 Prototype 1 was powered by a V-84MS 840hp V12 diesel from Chelyabinsk. The engine and transmission were later used on Object 188 almost without changes. After some testing, it was disassembled and its hull was used for the later prototype 3.

The second prototype was powered by a 1000hp V-85 V12 turbodiesel. Its ability to operate in high temperatures was thoroughly tested in Turkmenistan. After some corrections, the vehicle was first tested back in Russia and then used for armor trials that showed its excellent level of protection. These trials, however, left it completely wrecked and the hull was subsequently melted down for scrap.

The third prototype (designated Object 187 sb3) was never fully completed – it was essentially a sb2 hull used for various structural tests. Unlike the first two prototypes, it was equipped with a new turret, welded together from 40mm thick armor plates. It resembled the welded turret design present on the current T-90A, T-90S and T-90SA tanks, although there were some small differences. The hull was the same as that of the sb2 prototype. The vehicle was also experimentally fitted with a prototype APS and, like its predecessors, it was protected by a Kontakt-5 ERA. 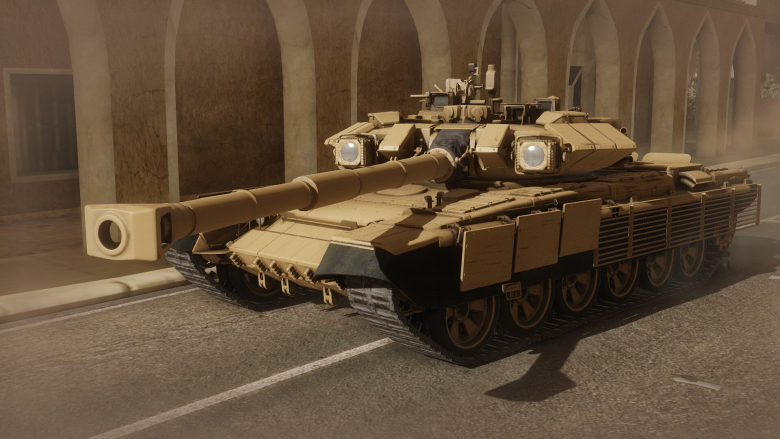 The suspension was improved a bit – the vehicle received a shock absorber to the fifth roadwheel (previous versions only had them on the first and sixth wheels). The sb2 engine was experimentally replaced with the T-80U's GTD-1250 gas turbine. This was more or less a political step – those in favor of gas turbines and their producers temporarily held sway over vehicle procurement and Uralvagonzavod wanted to show that they too could produce a turbine tank. However, by having both diesels and turbines on the same vehicle for testing, the advantages of high-power diesels could be shown along with many serious drawbacks of having a turbine-powered tank when a powerful diesel was available. The partially completed vehicle underwent trials first in Nizhny Tagil and then in Kubinka.

The fourth prototype (Object 187 sb4) represented the second batch of the project and a significant improvement following two years of development between 1989 and 1991. The vehicle was built in June 1990. It's hull was similar to that of the third prototype (until sb3 was converted to a turbine vehicle), but it received a new, larger welded turret. It was powered by an A-85-2 1200hp engine. Other changes included:

This prototype also underwent trials in Kubinka before the project moved into its final stage. 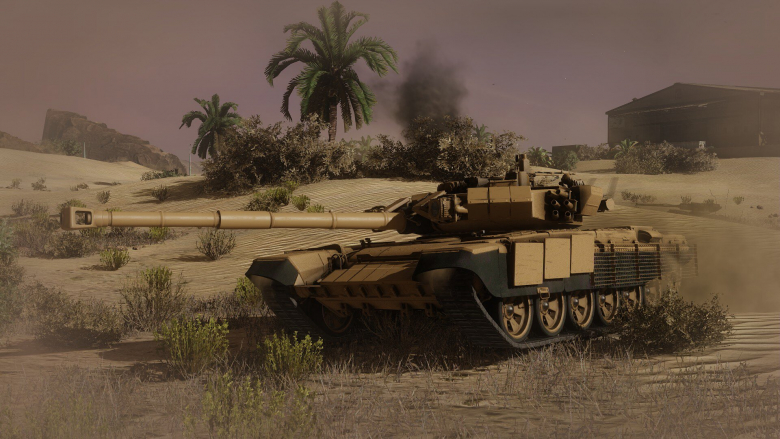 The fifth and sixth prototypes (Object 187 sb5 and sb6) were the last variants of this project and represent the third series. Its development took place between 1991 and June 1993 with the vehicles themselves built in April 1991. They represented the biggest departure from the previous concept with a very large number of changes compared to their predecessors that included:

Like the 4th prototype, both vehicles were powered by a 1200hp A-85-2 engine, but each had a different transmission – sb5 had a mechanical transmission, while sb6 was fitted with an experimental hydrostatic one. These prototypes are most commonly referred to when talking about Object 187 – they carried the newest gun and were visually very distinctive, if only thanks to the presence of the muzzle brake. 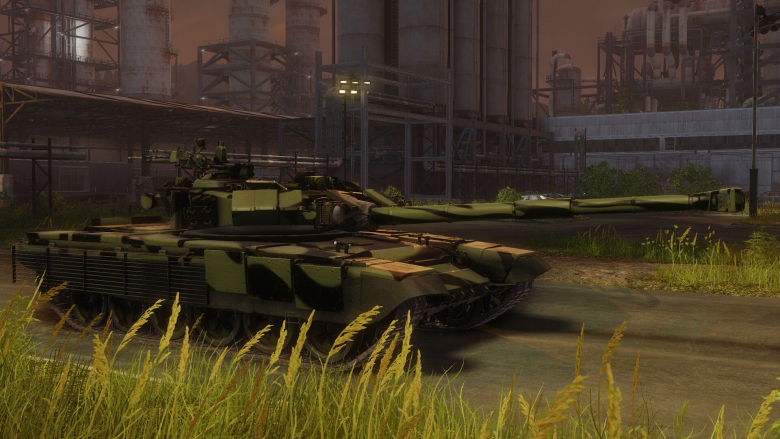 Both fared very well and Uralvagonzavod put a lot of effort into making Object 187 the next Soviet standard tank, but, in the end, the vehicle fell not to enemy guns nor did it become a victim of its own problems, but to the bane of all 1980s and early 1990s Soviet super tanks – money. The Soviet Union dissolved in December 1991 and its follow-up state, the Russian Federation, lacked the resources to continue the expensive arms race with the Americans. It was a bad time for the Russian military with a great many promising projects cancelled.

Such was the fate of Object 187 – the tank was excellent but Russia opted for a more conventional and cheaper upgrade in the form of the T-90. Four prototypes survive to this day, slowly rusting away in the vast fields surrounding the Kubinka military polygon – a sad end for these otherwise excellent machines. However, not all the lessons learned from their development were lost and some elements and solutions were used during the resurgence of Russian tank designs in the 2000s, ultimately resulting in the T-14 Armata next-generation tank.

In Armored Warfare, the Object 187 model is based on the third series (prototypes 5 and 6). It will be a high-Tier premium vehicle, coming very soon in Update 0.20. Other vehicles, including full progression lines, are planned for the near future.

We are proud to present the first preview of the newest addition to Armored Warfare - Update 0.20