Today we’d like to tell you about another upcoming vehicle, an Israeli Premium AFV called Namer. 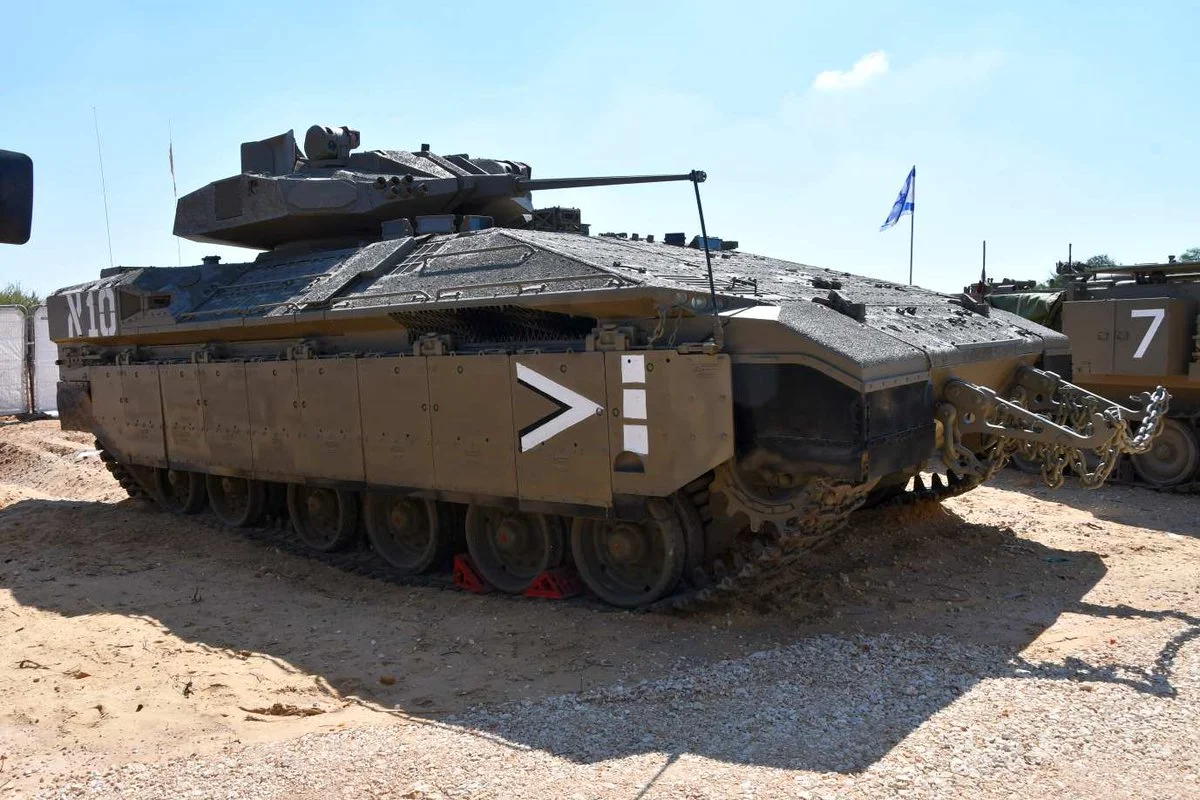 First, let’s talk a bit about its history. Israel has always had a knack for producing practical and unorthodox vehicles to suit its needs, pioneering the practical use of many technologies. The first mass-produced western ERA kit was the Blazer, the Trophy APS and others.

The same can be said about heavy and super-heavy APCs. Israel is a relatively small country surrounded by enemies, each of them being able to muster much higher numbers of troops than the Jewish nation. Correspondingly, the life of every Israeli trooper is precious as its military simply cannot afford staggering losses that inevitably come with a protracted war. That is why modern technology plays a massive role in the Israeli army with all kinds protective measures developed to save lives.

When it comes to armored transports specifically, Israel has long relied upon the venerable M113 APC – they got large amounts of them from the United States of America and elsewhere. Unfortunately, by now, the M113 is hopelessly obsolete with its thin skin barely being able to protect its crews from small arms. It is also difficult to upgrade – its chassis simply cannot hold a lot of extra armor. That is why Israel started developing truly heavy APCs from either obsolete or captured tanks. The result was a successful series of heavy machines relatively suitable for asymmetrical warfare, protecting their crews and the troops inside from terrorist ambushes. 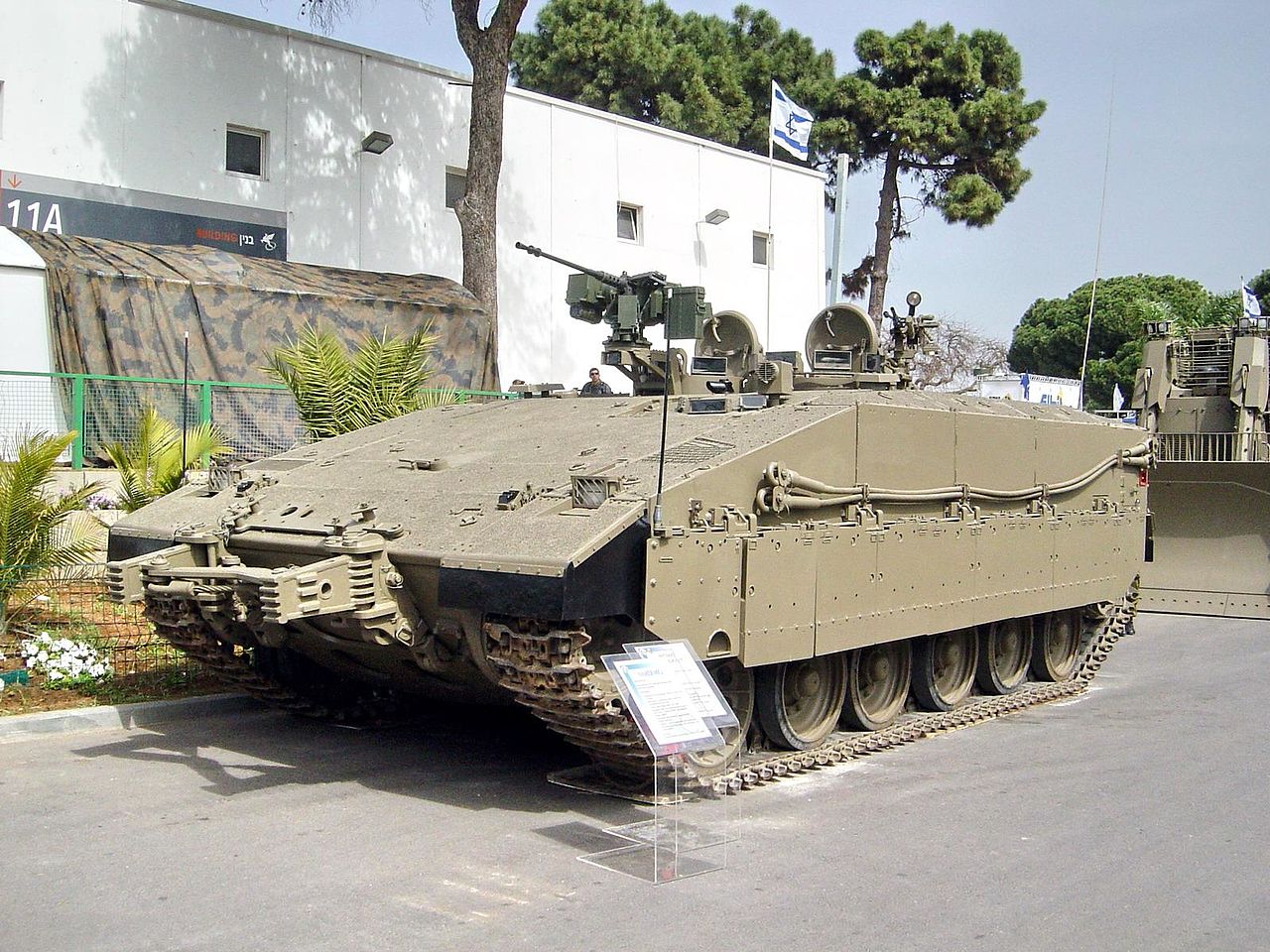 It is therefore logical that Israel would develop its own indigenous Merkava MBT series into a heavy (or even superheavy) APC – and that’s exactly how the Namer started.

The word Namer means “Leopard” in Hebrew, but in reality is a combination of the words “Nagmash” (APC) and “Merkava”. The initial idea to convert older Merkava tanks to APCs appeared in the 1990s (following the success of the abovementioned heavy APCs), but with the production of Merkava Mk.3 hogging pretty much all the available resources, it didn’t take off until the early 2000s. The 2004 Gaza conflict made the vulnerability of the Israeli M113s a mainstream military topic and prompted all kinds of research and upgrade deployment. It also sparked renewed interest in the idea of converting the Merkava into an APC.

The initial APC prototypes were converted from obsolete Merkava Mk.1 MBTs. Their hull was made taller and the turret was completely removed. A compartment for several troopers was placed where a Merkava would normally carry its ammunition. These prototypes were tested and sometimes shown publically between 2005 and 2006 but it was the 2006 conflict with Lebanon that really spurred things. Instead of using obsolete hulls, a decision was made to produce the Namer APC with brand-new Merkava Mk.4 hulls roughly from 2008 onwards. 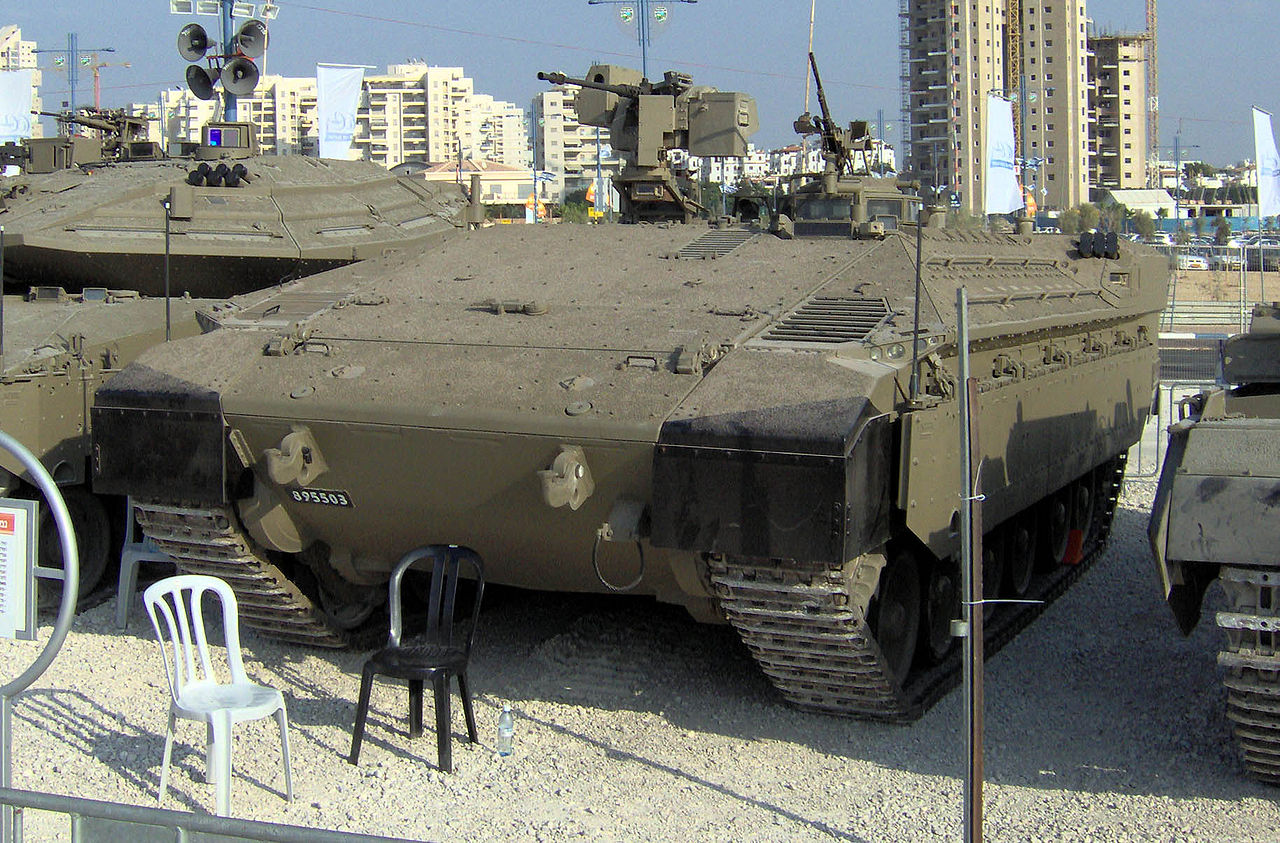 The production variant was unveiled in September 2008. It was extremely well protected, as you might expect from a modern Merkava, but it was also armed with machineguns only so, as you can imagine, this isn’t the version we’re introducing to Armored Warfare, but rather an evolution thereof.

The first public mention of an IFV version appeared in 2009 with the Israelis announcing they were looking into arming the Namer with 30mm autocannon, although a prototype apparently existed in 2008 already. What followed was a decade of trials as well as further Namer (allegedly partially taking place in the United States of America) until the vehicle was revealed to public in 2017.

The 2017-2018 Namer IFV version is fitted with an unmanned Rafael turret and armed with a combination of 30mm Orbital Mk.44 Bushmaster autocannon and Spike guided missiles. The interesting thing about this turret is the fact that it’s fairly modular and can be installed on other platforms (such as the Eitan APC) without compromising the internal structure. It is basically sitting on top of the hull rather than sinking into it.

The original Namer weighed some 62 tons and this version is even heavier – according to various sources, it weighs anywhere between 65 and 70 tons, which makes it the heaviest produced tracked IFV pretty much anywhere. The only comparable project would be the Russian T-15 Armata, which likely is 10-20 tons lighter. The Namer can carry 9 troops and has a crew of 3 men. 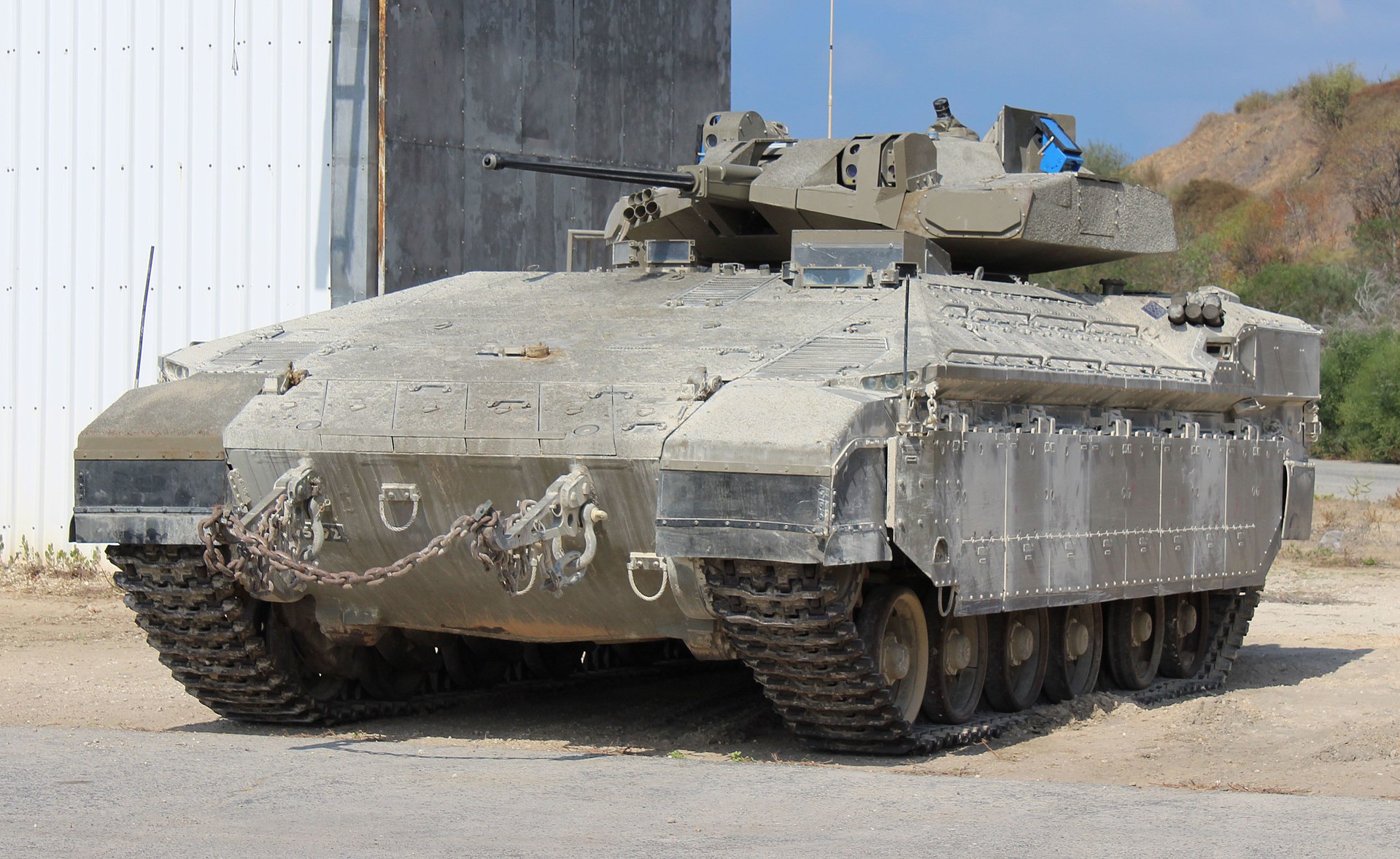 As you can imagine, the armor of this IFV is exceptional. The Namer was built for heavy duty fighting and its superior roof armor tells us of its true purpose – urban combat. Where other IFVs are extremely vulnerable from above, the Namer thrives in urban environment. Its considerable armor – on par with the Merkava Mk.4 MBT – is complemented by the Trophy hard-kill APS, which comes as standard equipment with every Namer IFV. But urban combat isn’t the only place where the Namer excels – it is no stranger to long-range combat either. Its Spike ATGMs come in a wide variety of configurations and can make short work of any enemy MBT.

Being an offshoot of the Merkava Mk.4 design, the vehicle is likely powered with the same engine, the 1500hp MTU MT883 diesel paired with a Renk RK325 five-gear automatic transmission. However, according to other sources, the vehicle is still powered by the Continental AVDS-1790-9AR diesel engine producing 1200hp. Either way, the IFV seems to be fairly agile despite its massive weight. The maximum speed of this vehicle is 60 km/h while the mobility remains comparable to the Merkava MBT.

Even today, the Namer platform remains in production and while it hasn’t really seen any major combat. By 2017, the amount of Namers in service was 120 and today, it is estimated to be roughly 150. By 2027, Israel wants to operate 531 Namer vehicles. However, how many of these will be the IFV version remains to be seen – the Namer IFV variant is still undergoing trials with only a few prototypes built. The results, however, do look promising.

In Armored Warfare, the Namer will be a Tier 10 Premium Armored Fighting Vehicle.

We’re going to set the Namer up as a Main Battle Tank and Armored Fighting Vehicle hybrid. What this means is that this vehicle will have Merkava-levels of protection. The hull will in fact have roughly the same armor as Merkava Mk.4 while the turret will take reduced damage. The Namer will also come fitted with the Trophy hard-kill APS (without the Supercharged mode).

But the firepower is where things get interesting. As you already know from the historical part, the Namer is armed with two primary weapon systems – 30mm Mk.44 Bushmaster autocannon and Spike ATGMs. Both of these weapons are already in the game so you are likely already familiar with them, although their overall values will be configured with the abovementioned protection levels in mind (that is, reduced compared to less-protected vehicles). What’s new, however, is the way you’ll be able to configure your Namer. 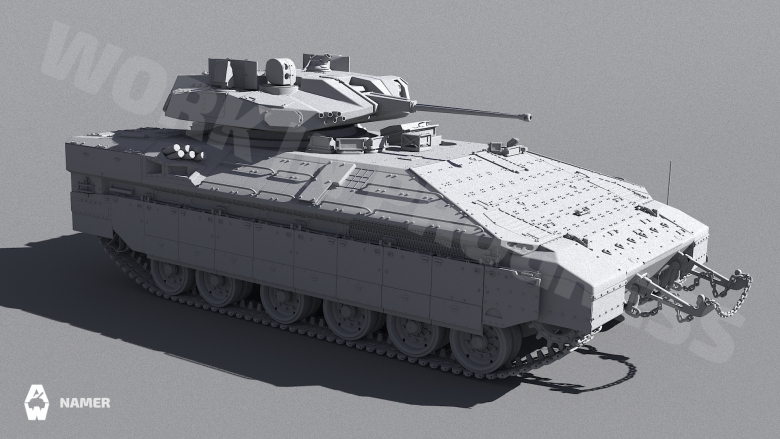 This ammo has the following properties: 390mm of penetration, 52 damage per shot, 40 rounds can be fired before the gun overheats, 2s cooldown and 15898 damage per minute value. On the downside, the ATGM reload time increases from 13 seconds to 20 seconds.

The ATGM configuration reduces the amount of autocannon shells you can fire before overheating the gun from 100 to 50. However, the ATGM time between launches is reduced from 3s to 1.62s and the magazine reload time is reduced from 13s to 10.8s, which translates into ATGM damage per minute value increase of roughly 31 percent.

In all three configurations, the gun will elevate to +70 degrees and depress to -12 degrees. At the same time, the Namer will carry infantry, so it’ll play like a very heavy AFV, but you can replace this Active Ability with a Designate Target one.

This vehicle’s downsides will be its camouflage and viewrange values, both of which will be poor for its class – 10 percent camouflage rating and 430 meters viewrange (460 when stationary). Its mobility will also resemble an MBT rather than AFV. With its 1200hp diesel engine, the Namer will have the maximum speed of 65 km/h and Merkava-like agility. 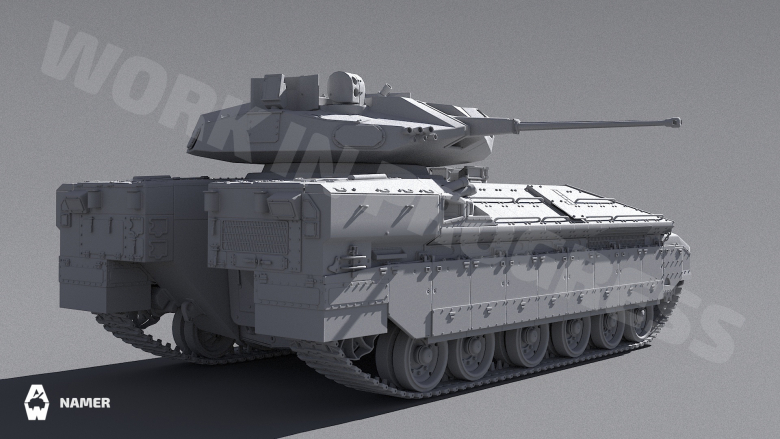 In summation, the Namer will be a well-protected lumbering behemoth, at least compared to other vehicles of its class. Its MBT-like characteristics will make this vehicle quite forgiving for new players, but, as they say, a jack-of-all-trades is a master of none. In our case, this principle will reflect in the reduced damage output compared to other, more specialized AFVs. Despite its class, it’ll never be really stealthy or a true long-range vehicle and its MBT-like mobility will prevent it from acting as an effective scout. It will, on the other hand, offer reliable fire support in all situations as well as the ability to spearhead an attack along with MBTs.

Within its constraints, you’ll be able to tweak its performance to match the style you prefer the most. Generally speaking, the autocannon configuration will come in handy in PvE where maximizing your damage per minute output matters, while the basic or ATGM configurations are intended for PvP where more tactical gameplay is required.

Learn more about the next Special Operation, which takes place near Košice