The history of post-war Germany – at least its western part – is a tale of economic success, built upon decades of hard work without large words or grand gestures with the Germans focusing on economic success, wary of its past but looking ahead to its prosperous future.

German arms industry reflected this approach (it still does in the fact), producing a number of military vehicles that weren’t ostentatious, didn’t loudly boast with reputation of being the best in the world – they simply were the best, or at least pretty damn good. Perhaps the best known of these machines was the Leopard 2 Main Battle Tank, its reputation and name often overshadowing other quality German military products. And one of those products was the Marder IFV. 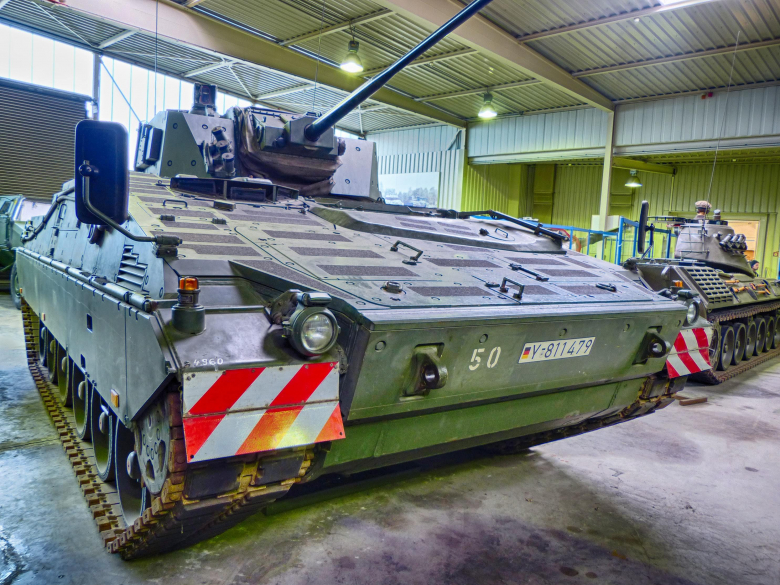 But, to understand the ideas behind the Marder, we have to go back to the dark days of the Second World War. Quite early in the war, the Wehrmacht came to realize that extra firepower for infantry APCs often really came in handy. That’s where various up-gunned variants of the ubiquitous German halftracks started to appear, armed with both cannons (20mm, 37mm) and fire support howitzers such as the short 75mm L/24. There even was a long 75mm pseudo-tank destroyer variant that carried the famous German PaK 40. Generally speaking, these upgraded APCs were quite successful (although, in general, halftracks as such left a lot to be desired for) and were used until the end of the war. The idea was, of course, a disaster for Germany and in the aftermath, the Germans had to deal with their past as well as their future.

There is a historical tendency to draw a thick line between 1945 and 1946, history-wise. The old world was gone and the new one began – Germany was separated into two countries for more than four decades and the consequences of the split can be felt even now, almost three decades after the re-unification. But in reality, there was no thick red line for people who lived in those times and for all the German losses, the war experience was not forgotten.

When the Cold War began in earnest, the first soldiers and officers of the newly established West-German Bundeswehr were Second World War veterans with plenty of experience. The initial equipment of the Bundeswehr had to be provided by their American allies, but the West Germans didn’t forget the infantry fire support lessons and sought to supplement their infantry formations with more firepower in the form of an indigenous IFV, arguing that the American battle taxi doctrine was wrong. They were right, of course, but it seems that this lesson was destined to be paid in blood – German blood in the Second World War and American blood a decade later, in Vietnam.

The result of the German thinking was the HS.30. While technically still an APC, it was armed with a 20mm Hispano-Suiza autocannon, packing a lot of punch for its time, more than the other APC the Germans used – the American M39 (which was, oddly enough, treated as an IFV in the eyes of the Germans). It was unfortunately also a disaster – it had an unreliable and weak engine, poor transmission and poor suspension. Today, it’s best known for the corruption scandal and investigation its poor performance caused – of the ten thousand initially ordered vehicles, only around two thousand were delivered before it was replaced by the next German IFV, the Marder. 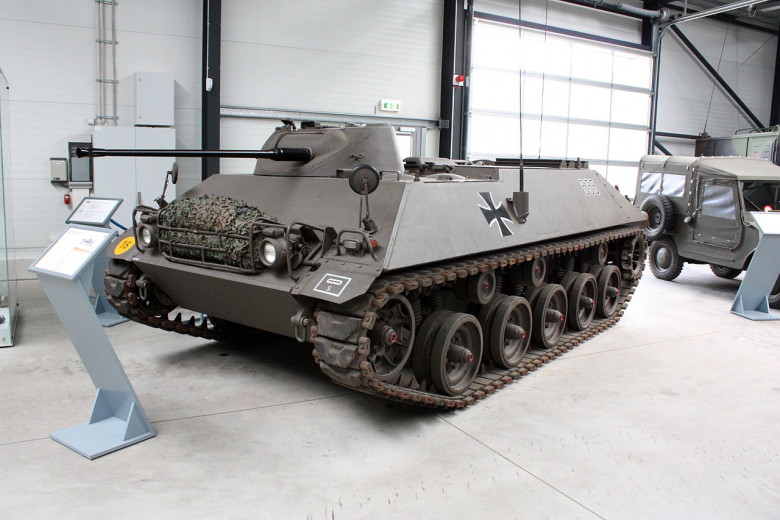 That is not to say that the Germans didn’t use standard APCs – since 1969, the Bundeswehr was armed with the American M113s, which finally replaced the wild assortment of obsolete wartime vehicles, such as the Universal Carriers, in German service. IFVs have always been, by definition, more expensive than APCs and there never really was enough money to replace all the APC (which is one of the reasons why Germany is using upgraded M113s to this day). But the course was set for the development of the Marder (“Marten” in English).

The Marder IFV was developed in the 1960s to succeed the by then discredited HS.30. Unlike the HS.30, the Marder was a true IFV with its role reflecting its armament. It was larger, powerful and successful. There were several Marder sub-variants developed during its service and their description goes beyond the scope of this article (it will be described in a separate on in the future) – but the truly interesting part was that it was accepted in service by 1971, a full decade before the American Bradley. It was armed with a 20mm Rheinmetall gun, had nice, sloped armor, solid protection levels and good mobility thanks to its powerful MTU engine. Its upgraded variant still remains in service, but the interesting part is that despite its undeniable qualities, it was never truly widely exported due to the very strict German arms export restrictions (much like the Swiss, the German companies were basically only allowed to sell arms to people who didn’t want them). The exports came only by the time Germany was considering to replace the Marder. 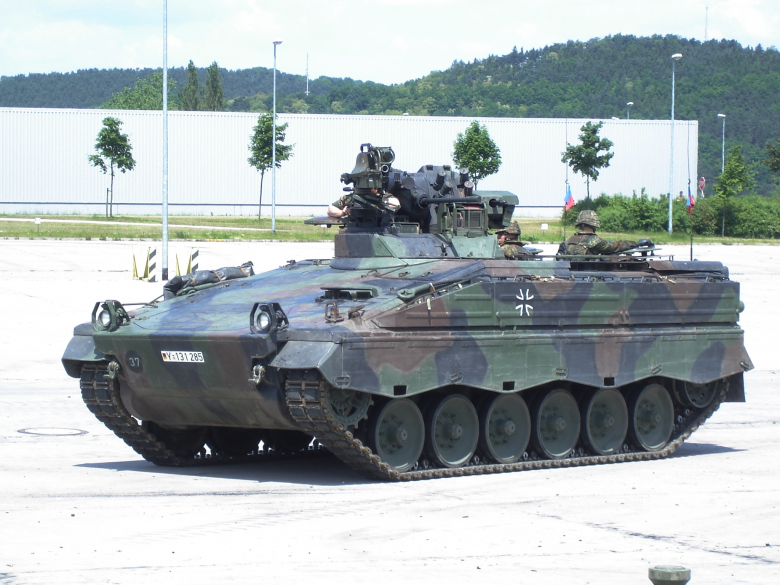 Let us skip a decade and move to 1982 – the Cold War was still a daily fact of life and Marder has just reached one half of its intended lifespan. In other words, it was high time for the Germans to start looking for a replacement, or so they thought at least. From 1982 to 1984, a military-wide discussion was held regarding the properties any future IFV was to have. Based on this discussion, the German military procurement agency formulated the following requirements:

Between 1984 and 1988, a number of proposals were submitted and in 1988, the Krauss-Maffei company was selected as the general contractor for the hull, powerplant and suspension, while Rheinmetall was tasked with the development of new automatic cannon, turret and fire control system. The ammunition feed was to be provided by Oerlikon Contraves and Heckler Koch. This new IFV project became known as the Marder 2. The initial goal was to produce 1000 of these new IFVs between 1997 and 2001. The first prototype was finished by 1991 and shown to Bundeswehr on September 17 of the same year.

Compared to the earlier Marder 1, it was massive, weighing 44.2 tons (over 16 tons more). This increase was not just due to its size – the vehicle was also larger than its predecessor and could carry 7 armed troopers as required – but because of the increased protection levels. The basic hull of the Marder 2 was made of steel and protected the front of the vehicle from any known 30mm shells, while the sides and the rear were protected from 7.62mm AP bullets and 155mm shell fragments. With a planned additional armor, the vehicle could resist 14.5mm AP bullets from any angle.

Rheinmetall developed a new turret for the vehicle, designated TS 503. It was a two-man turret with the gunner and the commander sitting next to one another (the gunner was sitting on the right side of the gun) while the driver was left in the hull. The turret was armed with new Rheinmetall Rh 503 dual caliber automatic cannon – the weapon could use two types of barrels – one was 35mm and one was 50mm. The barrels and feeds that could be easily changed – it took mere minutes to switch to another caliber. At first glance, the 50mm shells were obviously more powerful, but with the 35mm caliber, the vehicle could carry more ammunition. The gun was fully stabilized and its rate of fire could be set between 150 and 400 rounds per minute (the amount of rounds carried was 277). The maximum range was 2000 meters, the maximum elevation was +45 degrees and the maximum depression was -10 degrees.

The gun could fire the following types of ammunition:

The gunner had advanced optics at his disposal: the PERI-ZTWL 128/45 sights that featured:

The commander had an independent PERI-RT 60 periscope at his disposal and could also utilize the gunner’s thermal imager via a video feed.

The vehicle was powered by a MTU 881 Ka-500 turbocharged V8 18.3 liter diesel engine (the same that was later used in the Panzerhaubitze 2000) producing excellent 1000hp, giving the vehicle very good mobility and solid power-to-weight ratio of 22.62 hp/t. The engine was paired with Renk HSWL-284-C transmission, allowing the Marder 2 to go as fast as 62 km/h.

Overall, it was an excellent vehicle featuring cutting edge technology, but it had two big problems:

By the time it was introduced, the Cold War was over and there was little need for a new super-modern IFV. The threat of the Soviet Union was over, German unification was back on the table and everyone realized that this process would not come cheap. On both NATO and Russian side, the 1990s were the time when many promising projects were buried – and such was the fate of the Marder 2. 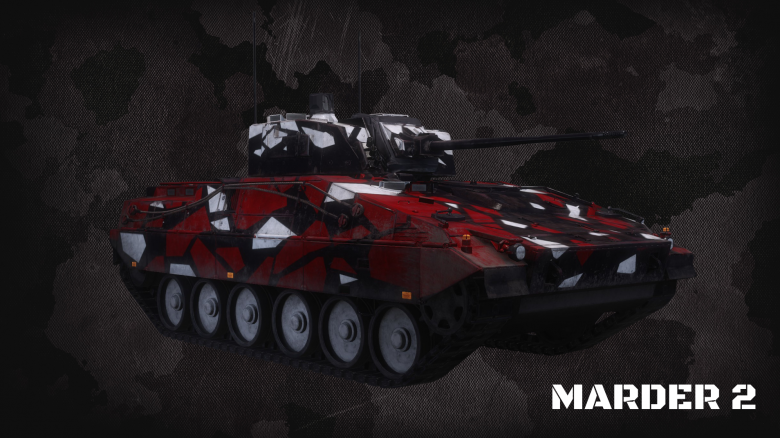 Two prototypes were built – VT 001 and VT 002. After the project was rejected, VT 001 went to the military vehicle collection in Koblenz, where it remains to this day. VT 002 was sold to a scrapyard and was scrapped in 2009. The Germans kept the older Marder 1 IFV in service, upgrading it further until the decision to replace it with the Puma IFV, a process that started in 2010 and continues to this day with the last production vehicles planned to arrive in 2020s.

We do hope you will like it and will see you on the battlefield!