The Patton series is one of the most iconic tank families in armored warfare history. In a previous post, we mentioned the original M48, which will appear as a Tier 1 vehicle in Update 0.19. That shift, however, leaves a vacancy that will be filled by another member of the M48 series – the M48A3. 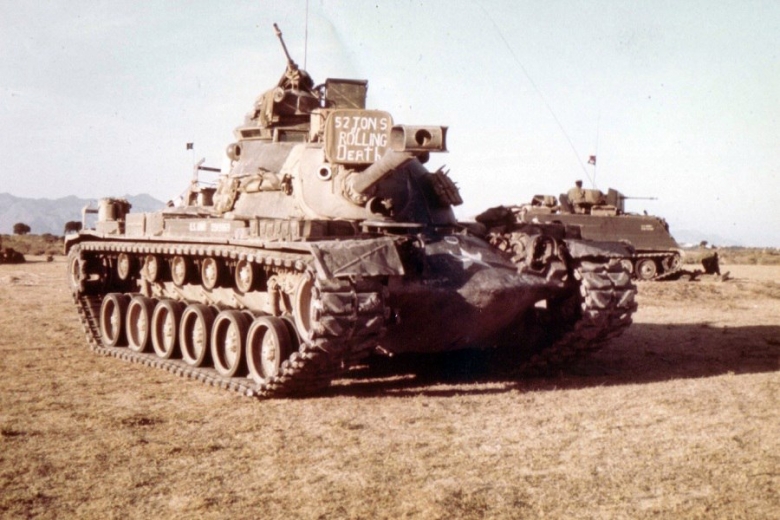 To understand the M48A3, we have to go back to the M48A1, an M48 variant with an improved driver's hatch and turret cupola, which was formally separated from the original M48 on October 25 1954.

While the M48 did not see any combat, the M48A1 most certainly did – and a lot of it. The M48A1 was used for the first time overseas in July 1958, when USMC tanks entered Beirut. They were also deployed in Germany, starting from approximately 1959. Perhaps its most famous deployment was the Vietnam War, where it proved itself as a tough, reliable workhorse. There was still a lot of room for improvement and this was recognized as early as May 1953.

One of the major drawbacks of the M48A1 was its massive fuel consumption and, as a result, its relatively short operational range. This was temporarily solved by using external fuel tanks (which could be jettisoned), but that was a temporary measure at best. The real solution stemmed from the transmission and engine development. 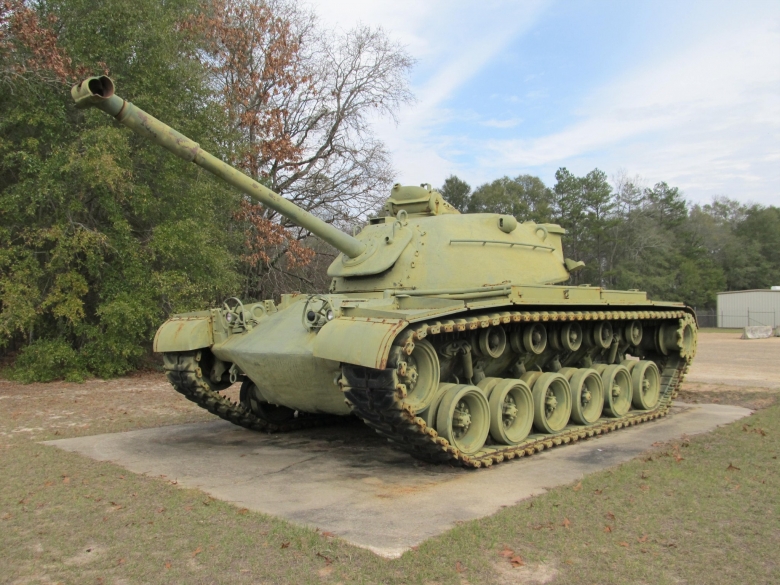 For starters, a new, less fuel-hungry, engine was developed (designated AVI-1790-8), replacing the two carburetors of the previous AV-1790 model with fuel injection. This produced approximately 10 hp more than the old engine.

There was also a new transmission - the XT-1400. It was cheaper and more reliable than the older CD series, but due to its design, it lowered the clearance of the vehicle, something the military did not really like. Nevertheless, the engine, the transmission and the external fuel tanks were tested on a modified M48, bearing (from January 1954) the official designation T48E1 (the return to the T designation signified its experimental nature).

The T48E1 did succeed in increasing the operational range, but the decrease in fuel consumption was relatively small (the range extension came from all the extra fuel in the tanks). The main problem was the transmission – apart from the abovementioned lower clearance, the cost of modifying existing M48 hulls to house it was quite high and having the same tank model with two different transmissions in active service was generally not a good idea due to logistics. As a result, the XT-1400 transmission was refused and the T48E1 program returned to testing the T48 with the modified version of the older CD-850 transmission.

At roughly the same time, Detroit Arsenal was running its own research with the goal of increasing the M48's operational range and reducing its IR footprint. They took what basically was the T48E1 and redesigned the engine deck to increase the airflow (and thus the cooling) of the engine. The internal layout of the engine compartment and fuel tanks were redesigned as well, increasing fuel capacity to 1268 liters. Access to the engine was made easier to shorten maintenance time. The suspension was slightly modified as well to improve its reliability. This modified variant received the official designation of T48E2 and four prototypes were ordered in December 1954.

In early 1955, Chrysler combined the T48E2 with a new hydraulic turret control system by Cadillac Gage, producing a variant that was unofficially known as T48E3. In October 1955, it received the official designation of 90mm Gun Tank M48A2. Production was approved in December. 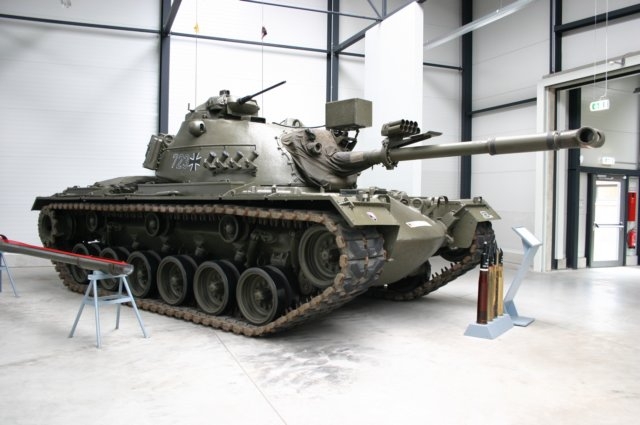 During production, the problematic M17 coincidence rangefinder was replaced with a M13 stereoscopic rangefinder and the ballistic drive was improved (to the M5A2 model). Bore evacuator capacity was also increased. This variant was designated M48A2C in January 1959. Of the 2328 M48A2s made, 1344 were of the M48A2C variant. The M48A2 had an interesting history – it was one of the first post-war West-German Main Battle Tanks along with the M47 in the late 1950s. From 1959 onwards, 1492 M48A2s were purchased. Other alternatives involved re-starting a modified upgraded Panther production, but that plan didn't go through for both political and economic reasons. 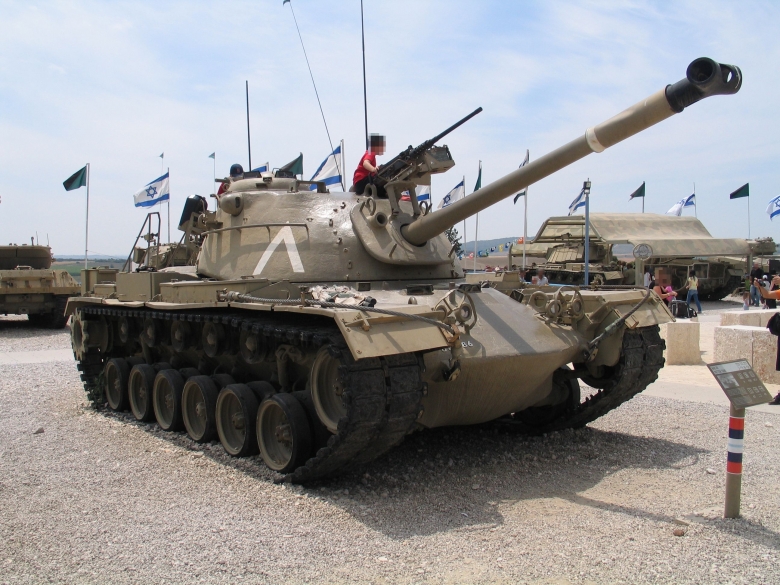 The M48A2 served in the German military until the 1980s (before being replaced by the Leopard 2 MBT). In the 1970s, the Germans upgraded their M48A2 to M48A2GA2 level by replacing the 90mm gun with the 105mm M68. Some German M48A2s were apparently (according to some sources) sold to Israel, which used them as part of the Magach vehicle family (which covered all Israeli Patton variants).

Returning to the United States, another project began around the same time as M48A1/M48A2 production with the goal of further improving the range of the vehicle by installing a diesel engine and improving firepower by replacing the 90mm gun with a licensed Royal Ordnance 105mm L7 variant. It was an interim solution. It's worth noting that practically all the actively used post-war American Main Battle Tanks (with the exception of the M48 and the Abrams) were considered interim solutions, proving once again the age-old adage that interim solutions last the longest. This program eventually became the 105mm Gun Tank M60, but its convoluted development is a story for another time.

However, as things were, the Americans found themselves in possession of large quantities of M48A1 and A2 variants while the new MBT, which was superior in almost every aspect, was already in production. The obvious solution was to upgrade the M48A1 and A2 models to perform on par with the M60 variants, but, as usual, the road to that goal was not as easy as the designers imagined.

The first attempt to retrofit the M48A1 with M60 technology (notably the diesel engine and the 105mm gun) was approved in April 1960 under the designation of M48A1E1. The vehicle received its designation after it was built – the first prototype was delivered to Aberdeen in March and six prototypes in total were eventually built and tested by various units.

Unlike the M48A1, the M48A1E1 was powered by a diesel engine, specifically the Continental AVDS-1790-2 29 liter V12 supercharged diesel, producing approximately 643 horsepower. The engine was paired with a CD-850-6A transmission. The weight, compared to the standard M48A1, increased only slightly (from 47.2 to 47.7 tons).

The suspension was also upgraded with certain M60 elements. The 90mm M41 gun was, as noted above, replaced by the 105mm M68 (a licensed variant of the L7) along with the M60 fire control system. While this change reduced the amount of ammunition carried from 60 to 57 pieces, the vehicle was completely superior to the old M48A1, thanks to the improved firepower and enhanced range.

However, due to the limited cupola space, the vehicle could not mount the advanced vision devices planned for the M60, making further development of the M48A1 limited. Additionally, there was a problem with the M68 gun – not from the design perspective, but from an economic one. For one, the amount of readily available 105mm ammunition was limited. Even worse, re-arming all the M48s with the 105mm M68 meant that the military would be left with huge stockpiles of useless 90mm ammunition. The combination of these factors caused the 105mm M68 to be removed from the M48A1 modernization program. 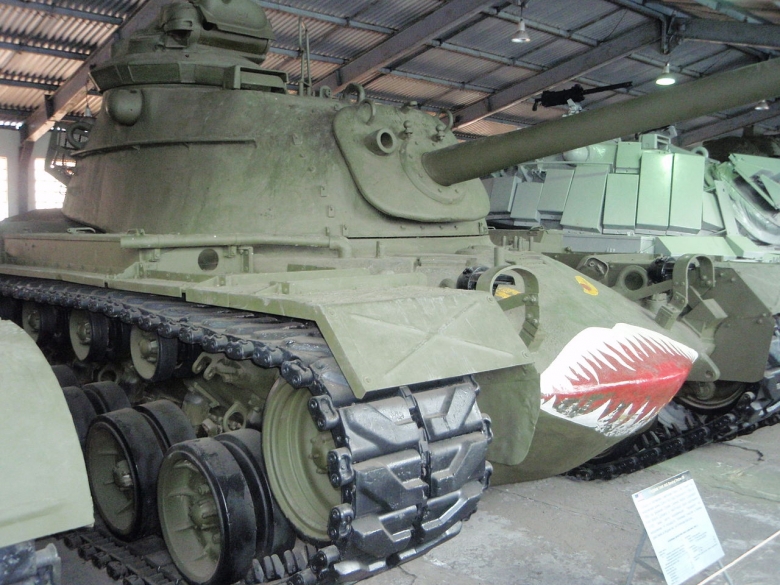 Two of the M48A1E1s received their 90mm M41 guns back and were re-designated M48A1E2s. With several more upgrades, the M48A1E2 variant was accepted into service under the designation of 90mm Gun Full Tracked Combat Tank M48A3. The conversion of the existing M48A1s and M48A2s to M48A3 standard began in February 1963 with 1019 tanks delivered to the U.S. Army and U.S. Marine Corps by late 1964.

Once again, save for the modified engine deck and rear, the armor of the vehicle was kept on the same level as that of the M48A1/M48A2. The engine was the AVDS-1790-2A model (643 horsepower). The transmission was the CD-850-6A model, same as in the M48A1. The tank's maximum speed was 48 km/h. The gun was still the 90mm M41, but the ammunition count was increased to 62 rounds. The gun also received a new nylon shield cover (giving the mantlet a textile look). The FCS was upgraded to include:

This was the basic M48A3 configuration, but that wasn't the end of it. Another attempt was made in late 1965 to re-arm the M48A3 with the 105mm M68 gun, but once again, the plan was foiled by economic constraints – this time, all the available funding was being diverted to the war in Vietnam and there simply wasn't enough money to fund everything. Another issue was that by the time the plan was presented, a number of M48A3 tanks were already loaded and well on their way to South-East Asia.

The following upgrade (from 1967 onwards) was therefore somewhat less ambitious. The M48A3 received – amongst other smaller improvements from the M60A1, such as the controls and improved engine grille – a new commander's cupola (the existing cupola was elevated and a visor ring installed underneath). The previous M1 cupola was often criticized for poor vision and while this solution did not fix all the issues it did improve the situation. Thus modified, this vehicle became temporarily known as M48A3 (Mod.B). That name was dropped once the M48A3 conversion program finished. This happened by late 1967 with a further 578 tanks modified by the Bowen-McLaughlin-York company, bringing the total number of modified vehicles to 1597.

The M48A3s eventually found their way to other users. A considerable number of M48s of different variants was given or sold to the forces of South Vietnam. After the Vietnam War was lost, around two dozen stayed in Vietnamese service, but were soon retired due to a lack of spare parts. 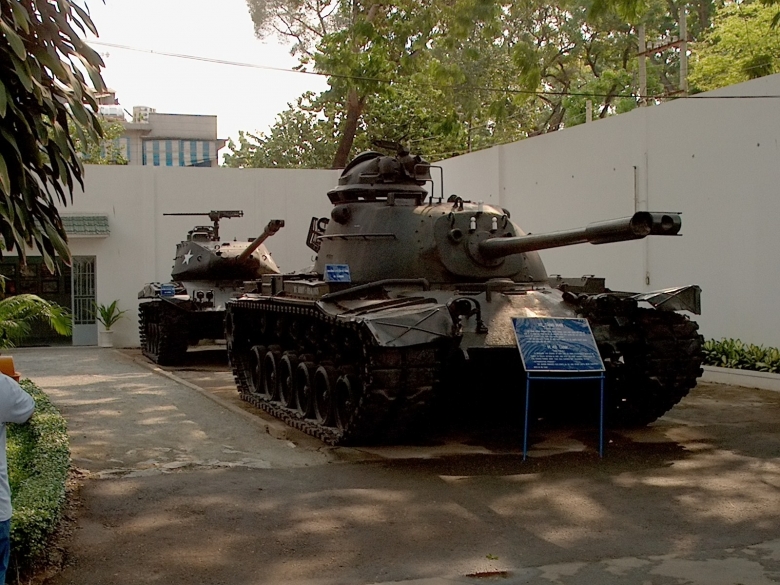 The moment when the M48s truly shined was the Six Day War and the Yom Kippur War. In Jordanian and Israeli hands, these machines were deadly. Unfortunately, they suffered massive losses during the Yom Kippur War due to the massive amount of Soviet-supplied Malyutka guided missiles, launched both by well-hidden ATGM teams and from the BMP-1 AFVs. One fatal flaw was discovered during the conflict – the propensity of the M48 to burn viciously when penetrated from the front due to flammable hydraulic fluid, causing massive crew casualties. This issue was only remedied later when the fluid composition was changed to a less flammable solution.

Another issue discovered (by both the Israeli and the Americans in Vietnam) was the danger of ammunition explosion during turret hits. This was later also eliminated by re-arranging ammunition stowage. 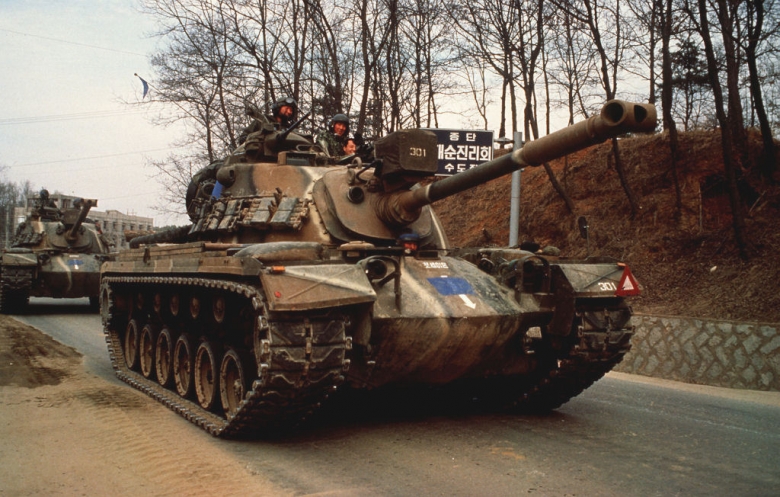 The Republic of China and South Korea also used the M48A3 variant, although it did not fire a shot in anger in service of these two countries.

The M48 soldiered on for several decades and eventually received its 105mm gun in the M48A5 variant, which was then used by several countries and continues to serve to this day. Turkey and South Korea are currently the biggest M48 operators.