Update 0.30 features a major update to the vehicle pool of Oscar Faraday, consisting of a number of experimental American designs. You already know of some of them – the Griffin Light Tank, an experimental Abrams or the M113 Hellfire. But, in the immortal words of Bachman Turner Overdrive – you ain’t seen nothing yet, because, today, we are ready to unveil one of the crown jewels of this branch – the General Electric DIVAD proposal, otherwise known as an M48 tank armed with the GAU-8 Avenger. 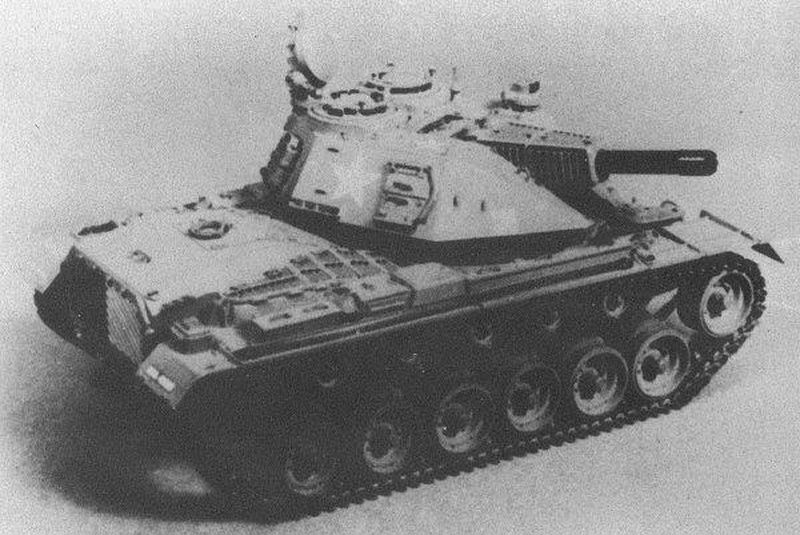 That’s right, let that sink in – a tank, armed with a giant 30mm rotary gun, spewing depleted uranium shells at 4000 rounds per minute. This is not fiction, mind you; this is what General Electric really proposed for the DIVAD program to keep up with American armored formation and shoot down anything that flies.

Much of its history was already covered in the earlier DIVAD article and the project never really moved anywhere beyond this proposal stage, so let’s take a quick look at the Avenger cannon and then talk about how it’s going to work in Armored Warfare.

Seven barrels, 30mm caliber and three hundred kilograms of pure destructive power – that’s what one of the most famous weapons in the world, the General Electric GAU-8 Avenger, is about. Developed in the 1970s, it quickly became known as the “gun a plane was built around” – we are referring to the A-10 Thunderbolt II of course, another legendary piece of American equipment. As we mentioned above, apart from 30mm HE-I shells, the gun can fire PGU-14B AP-I shells that have the muzzle velocity of around 1000 m/s. What this means is that they can cover the gun’s maximum effective range in around a second.

Contrary to popular belief, these shells – despite their ultra-hard core – do not, by themselves, boast extreme penetration values. These are “only” 30mm shells after all, so we are talking about 60mm to 80mm of nominal penetration. This is, however, compensated by the Avenger’s extreme rate of fire, so typical for modern aircraft guns that need it due to the very short windows of opportunity that open during high-speed combat. The Avenger can fire around 60 of these shells in under a second, producing its distinctive growling sound in the process. This volume of fire can literally tear a tank apart – and it did, during the Desert Storm operation where the Thunderbolts truly earned their fearsome reputation. 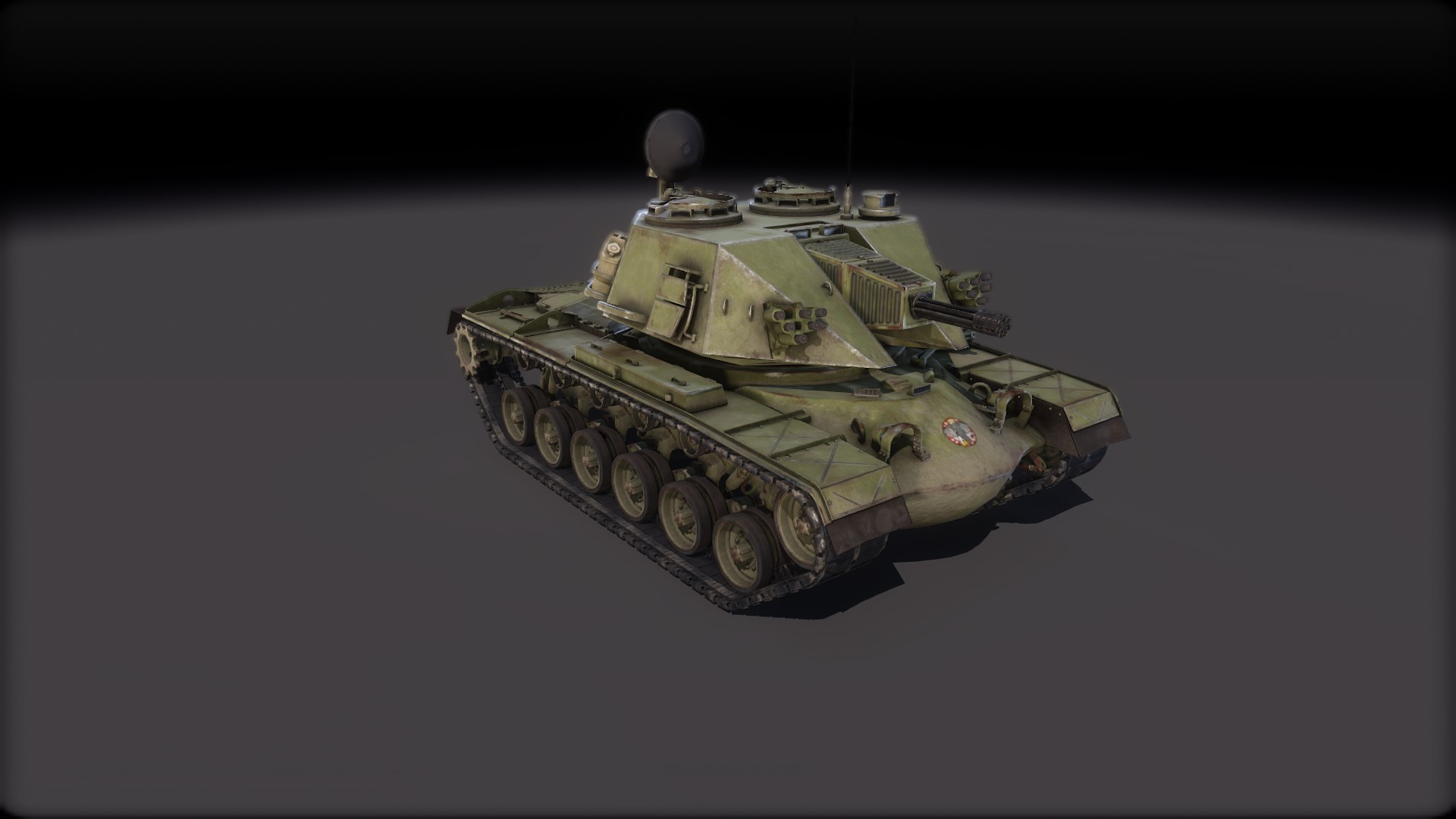 So, by now, you are surely asking – how will this work in Armored Warfare? Surely we cannot give an in-game vehicle a rate of fire that’s five times higher than that of the Terminator series?

Well, we totally can, because that’s exactly what the vehicle’s going to have – four thousand rounds per minute. Of course, some conditions will apply, so let’s start from the beginning.

In Armored Warfare, the M48 GAU-8 will be a Tier 10 Tank Destroyer, unlocked from the TTB Tier 9 MBT. As it will consist of an M48 steel hull and turret, neither its mobility nor its armor will be anything to write home about – the armor will protect frontally basically only against autocannons and the vehicle will be fairly sluggish, well below most high-Tier MBTs.

In Update 0.30, we are introducing a new class of guns with different mechanics – rotary cannons. As their name suggests, these will have multiple rotating barrels, allowing for the highest rates of fire in the game. In order to compensate for this power, the guns will use a new mechanism called Overheat. 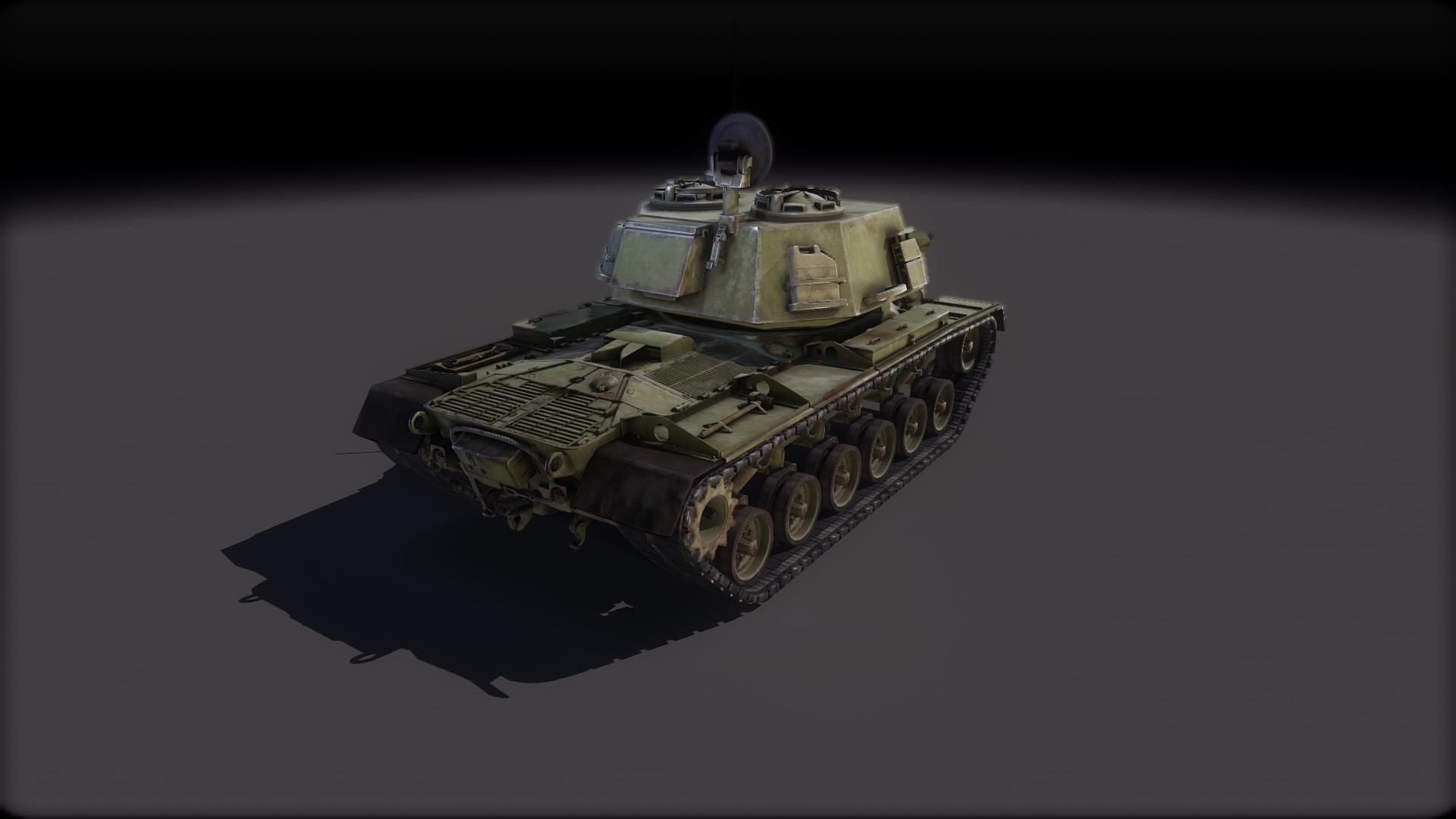 Overheat is pretty much what most people imagine under the term. The longer the gun fires, the more it heats up – until it overheats. In the game, a progress bar will show the level of heat for the rotary gun – the longer you fire, the more the bar fills. When it is full, the gun will overheat and you will have to wait for a certain period of time until it cools down. The gun cools down on its own when not firing, so taking breaks in sustained fire will be a must.

The second major difference is that the autocannon will need a split second to start spinning before it actually fires (commonly referred to as “spool time”). It’s worth noting that the guns will not be able to fire off single shots – there will be a minimum burst size at least.

The final difference compared to standard autocannons will be the way the gun treats penetrations and damage. Few surfaces can withstand such a hailstorm of shells and even the thickest armors lose their integrity under this kind of fire. Rotary cannon AP shells will therefore deal damage even if their hits do not result in penetrations. This damage will, of course, be noticeably reduced – the thicker the armor (and therefore the bigger the difference between the gun’s penetration and the target’s armor thickness), the lower damage will it receive. From a certain threshold, the target will receive no damage so it will not be possible to just sit back and melt enemy Challengers and Armatas by firing at their turret. 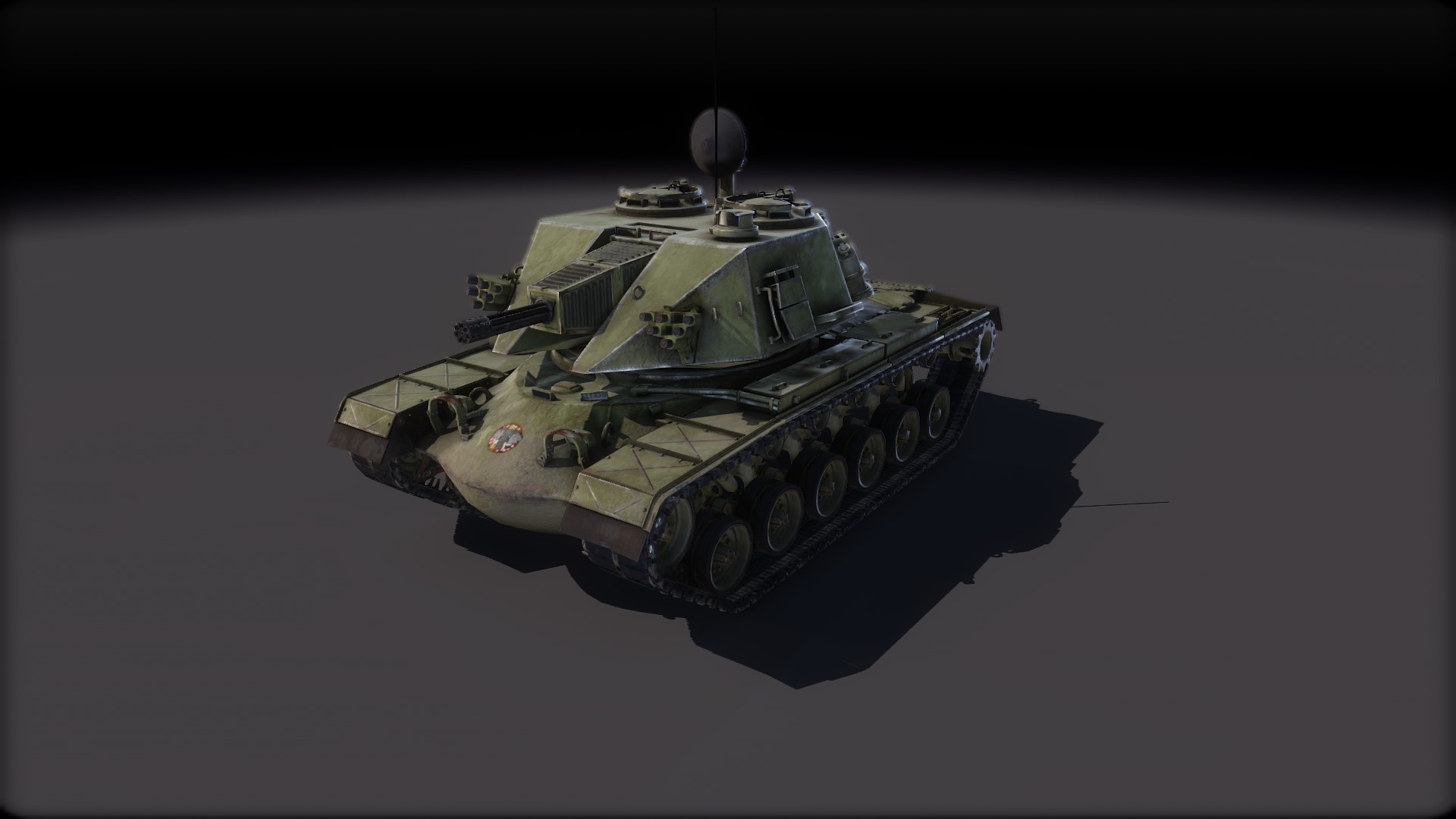 Now is the time to take a look at the specifics of the GAU-8 Avenger gun on this vehicle.

However, before we do that, please do keep in mind that this is just an initial idea that shows how we’d like to set the vehicle up in the game. These numbers are therefore all but certain to change after a number of thorough rounds of testing.

The Avenger will have two modes of fire – high RPM and low RPM. Both modes will fire one type of shells – the PGU-14/B armor-piercing shells with depleted uranium cores:

In both modes, the gun will take roughly half a second to start firing due to the need to start spinning its barrels.

The high RPM mode will operate at 4200 rounds per minute, but will only be capable of a short burst of roughly 130 shells before the gun overheats. If that happens, it will take a short while to cool the gun back down to normal. This mode is intended for short windows of opportunity where it is absolutely critical to unleash all hell as quickly as possible.

The low RPM mode will operate at 2100 rounds per minute and will allow you to fire in longer bursts (up to 8 seconds). During this cycle, you will be able to deal around 7000 points of damage, bringing your average damage-per-minute value to whopping 52000. That number is, of course, only theoretical – the gun will overheat, bringing the realistic damage per minute output to perhaps around 20000, which is, still, a number to be reckoned with. 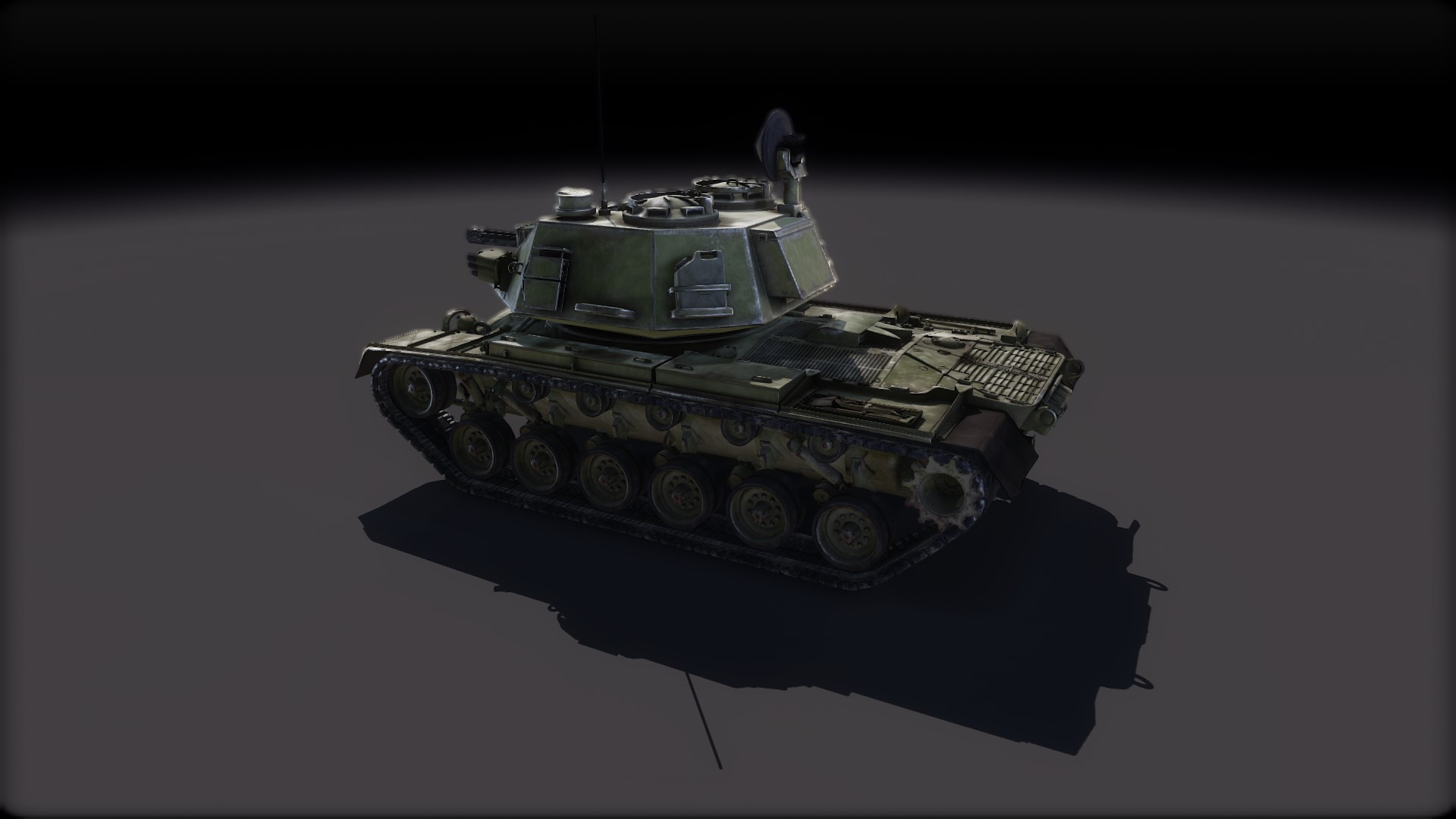 As one might expect from such a system, it will not be very accurate on the move, although its static accuracy will be fairly decent. Of course, the longer you hold the firing button, the more will your accuracy decay. On the other hand, being an anti-aircraft system, the M48 GAU-8 will feature very fast turret rotation, allowing you to engage different targets quickly without losing accuracy from traversing your turret.

In summation, what we have here is a rather fragile vehicle with no protection against enemy ATGMs or cannons, but capable of dealing insanely high amounts of damage over short periods of time. Like the other Oscar Faraday vehicles, it will require a lot of thinking and strategic use to become successful – its shells have relatively low penetration, making them murderous only when targeting lighter vehicles or the rear areas of enemy MBTs. When facing against MBT frontal armor, however, they do lose their power rather quickly.

In other words, getting behind a target will result in nearly a certain kill, but dealing with enemy MBTs will need some planning and careful steps. Flanking will not be easy due to this vehicle being rather conspicuous and slow, but if you achieve it, you will be able to take multiple enemies apart with your bursts without overheating.