The M108 is a light self-propelled howitzer that will be introduced to Armored Warfare in Update 0.19 as part of Zhang Feng's SPG branch.

The history of M108 development reaches back to the Second World War, where it was discovered that the standard artillery of the time – towed behind trucks or even by horses – was extremely vulnerable to both enemy direct fire and counter-battery fire. Additional issues included poor off-road capabilities (with the exception of the so-called mountain guns), poor ability to traverse and the inability to keep up with fast mechanized units in general.

During the war, practically all nations developed their own version of mechanized artillery by putting large cannon on a tracked chassis. The Americans were particularly active in this field and the research certainly didn't stop when the war ended, eventually resulting in the M109 line of self-propelled vehicles, running from the 1960s until today.

The basic requirements for the next generation of American self-propelled guns were defined as early as in the late 1940s. They included:

Additional requirements mentioned the use of technology that was advanced for the time, such as ballistic artillery radar to locate the enemy. 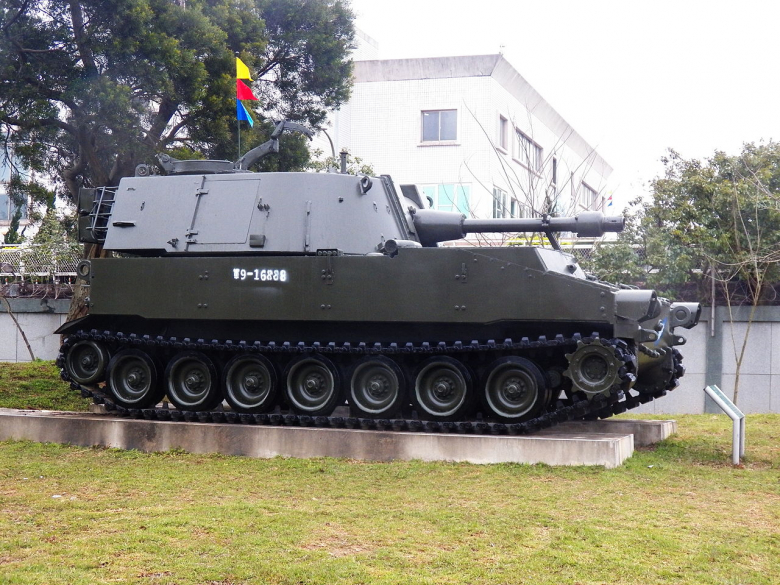 When it comes to gun caliber, the general idea was to actually have two types of mechanized artillery:

In the early 1950s, there was a proposal to adopt a special caliber (110mm instead of 105mm and 156mm instead of 155mm) and higher performance shells, but the artillerymen and quartermasters were not thrilled with the prospect of having to deal with yet another separate supply chain and it was dropped really quickly.

In April 1953, the Ordnance Tank-Automotive Command authorized the development of two new artillery vehicles, the T195 and T196 self-propelled howitzers with the intention of starting mass-production in 1960. The T195 was originally supposed to carry a 110mm howitzer but that was changed to a 105mm relatively soon (in 1956) while the T196 was to carry a 156mm howitzer (later changed to 155mm).

The T195 was supposed to be a next generation self-propelled artillery piece. One of its primary purposes was to be able to fight all around the world due to the looming Cold War, which in turn meant it had to be easily transportable, especially to Europe where the Soviets were expected to attack.

As a result, the design was compact and relatively light since the hull was to be made from military grade aluminum. Another idea was for the vehicle to be amphibious – this was not achieved through the design itself, but by installing a set of rather unwieldy floats. They were difficult to install, broke often and crews hated them with a passion. 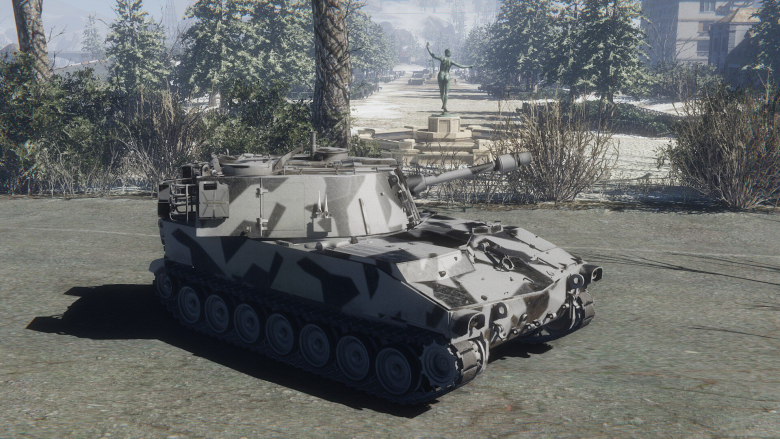 T195 and T196 development ran hand in hand. Several paper concepts of the T195 and T196 were introduced between 1953 and 1956 and in October 1956 the actual engineering phase begun at the Detroit Tank Arsenal. The first prototype of the T195 was delivered in October 1958 and tested on the Fort Knox proving grounds, but various suspension and final drive issues were discovered, resulting is a considerable development delay.

In the end, the suspension issues were ironed out. At the same time, the vehicles received diesel engines instead of the older gasoline ones (in parallel with the M48 to M60 shift) to give them much better range, reduce overall fuel consumption and improve some maintenance issues. Thus modified, the 105mm prototype received the designation T195E1. Testing resumed in 1960 but again resulted in suspension and final drive problems, causing another long delay.

The issues were discovered to be partially connected to poor production engineering – two more prototypes were built and tested in Aberdeen in 1961. This time, the solutions developed for the T195E1 worked properly and the T195E1 and T196E1 prototypes fared really well. The U.S. Army approved a limited production of the vehicle in December 1961. Production started in late 1962 and in July 1963 the T195E1 received its official military designation: M108, 105mm, Howitzer, Self-Propelled (the T196E1 received the M109 designation).

The M108 carried a crew of five men (M109 carried six) and weighed 20.96 tons. As its low weight suggests, it wasn't heavily armored. Its 5083 category 32mm aluminum plates (same armor thickness all over the vehicle) were designed to primarily stop artillery fragments and small arms, not heavy incoming direct fire (despite what the frontal hull sloping might suggest). Considering that the vehicle's primary role was indirect fire, this was not really considered a problem. 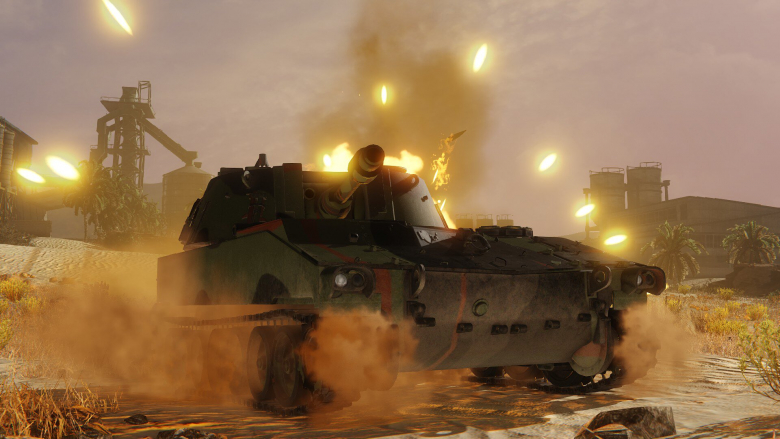 The main armament of the vehicle was the 105mm M103 howitzer, mounted in a turret capable of full traverse. This allowed the vehicle to switch and engage targets rather quickly, compared to the older casemate designs. The downside was that the turret did not have a hydraulic traverse mechanism and had to be traversed manually. The gun could elevate to +75 degrees and depress to -6 degrees, while the maximum rate of fire was around 10 rounds per minute. It's worth noting that the M108 was fully capable of direct fire using its M118 telescopic sights.

The vehicle was powered by a 9.3 liter Detroit Diesel 8V71T supercharged V8 diesel engine, producing some 340 net horsepower. This gave the M108 a power-to-weight ratio of 16 hp/t and maximum speed of 56 km/h (35 mph).

Generally speaking, the M108 was not a very successful design and far less so than the M109. Production only ran until 1963 with a mere 355 vehicles built.

At that point, the U.S. Army decided to unify the artillery caliber of the mechanized divisions to one – the 155mm. The bigger caliber was selected because it was felt mechanized artillery units needed even more firepower than before, especially in the face of the Soviet armor in Europe, which is why the 105mm caliber was considered obsolete and the M108 would be the last mass-produced American 105mm self-propelled gun.

The only American combat use of the M108 occurred during the Vietnam War, where a few M108s were sent along with the M109s. The terrain was a major problem that hampered non-tracked vehicle movement, but the M108s and M109s were valuable because they could pass through the mud, had enough armor to protect their crews from Vietnamese light infantry ambushes and the turret traverse allowed them to engage targets in all directions, something the towed artillery was incapable of.

On the downside, towed artillery was essentially helicopter-transportable and could be deployed and used in remote areas and during helicopter assaults while SPGs were more restricted. They would typically remain stationary as part of American fire bases, providing supporting indirect fire on call and defending the base itself.

It was not terribly uncommon for these vehicles to act as direct fire support platforms as well, especially in the defensive role. Sometimes they would be detached from the fire base forces and move with the units they were assigned to. While the 105mm firepower was not enough to knock-out an armored target, it was devastating against improvised Vietnamese fortifications or infantry formations. Such assaults, however, were risky.

The first M108 unit was deployed in Vietnam in June 1966 and by mid-1968 there were already 36 M108s in Vietnam that remained until mid-1970, when they were recalled back to the United States.

Many M108s were subsequently exported to several countries, including:

One Belgian use of the M108 is worth taking a look at. After retiring the M108s, they mated several M109A2 hulls with M108 turrets, producing a hybrid variant called M108A2B. Rather than actual combat use, the M108A2B was intended for crew training as the Belgian army possessed large stocks of 105mm howitzer ammunition. Taiwan also converted its M108s by removing the turret and installing two types of long 155mm howitzers directly on top of the chassis.

In Armored Warfare, the M108 will be a Tier 3 direct fire SPG vehicle (formerly artillery). The first of its class, it will be capable of engaging targets using its 105mm howitzer at medium to long distances. Massive (for its Tier) single shot damage will be compensated by rather thin armor, vulnerable to many vehicles including those with autocannons only. Careful gameplay and positioning will be a requirement for the entire overhauled SPG class.

For more information about the artillery overhaul, please see our Balance 2.0 Progression article.