The story of the LAV-105 is closely tied to both the LAV-25 and the Stingray because, essentially, it is the LAV-25 hull with a 105mm Stingray turret, an interesting combination indeed. 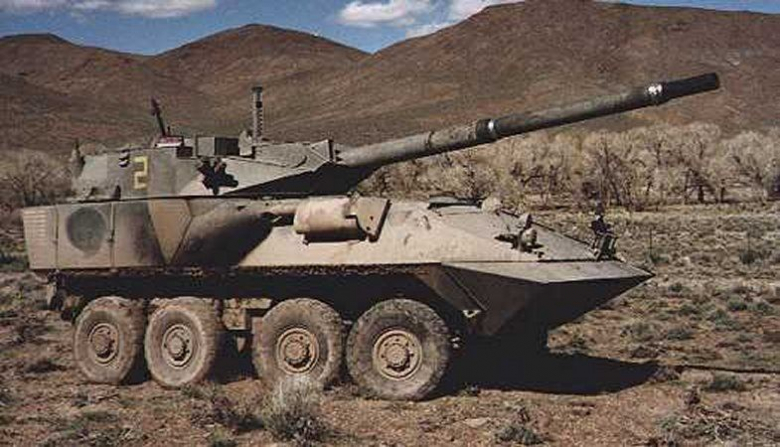 The LAV designation stands for Light Armored Vehicle. The entire LAV series program started in the 1970s with a new U.S. Army military doctrine calling for the formation of a new, rapid-deployment force (Rapid Deployment Task Force) that could be used overseas. The Senate Armed Services Committee, which was responsible for handling the issue politically, approached the U.S. Army and the U.S. Marine Corps in 1980 with a proposal to get them a new light armored vehicle for these purposes.

The demands were quite simple:

There was the Bradley, but the endless delays and other issues in its development along with its dimensions did not make it a good candidate (and that's putting it mildly). Both military formations agreed to the initial proposal and the U.S. military contacted 20 separate companies with the requirements in April 1981.

Only 3 of the 20 companies were seriously evaluated:

The three companies needed to submit three prototypes each (note that tracked or wheeled wasn't a requirement at this point). Two prototypes from each company were to be armed with the 25mm M242 Bushmaster chain gun and one with a 90mm Cockerill cannon, thus demonstrating the design's ability to carry different weapons systems.

Alvis Ltd. entered the competition with a Scorpion 90 and two Stormer APCs, retrofitted with a Bushmaster cannon – all of them were tracked vehicles. Cadillac Gage used two LAV-300 6x6 AFVs along with a modified LAV-150. General Motors of Canada entered the contest with a modified Swiss MOWAG Piranha AFV design (the only 8x8 vehicle to participate).

At that point, Canada had been using the Piranha platform (albeit a 6x6 version) for half a decade already with good results – a few were even borrowed by the U.S. Marine Corps for comparative trials and training along with the M113 APC. The other competitors were either untried upgrades or vehicles sold in very limited numbers for export, usually to third world countries. 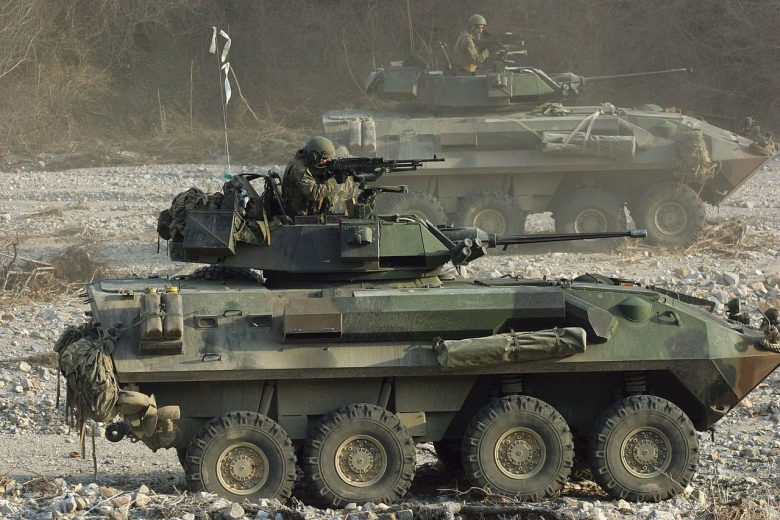 The comparative trials of all three contestants took place in California and Arizona. The General Motors' Piranha came out ahead and was officially confirmed as the winner in September 1982, with both good performance and reliability cited.

However, it soon turned out that the program was far too ambitious. The Army withdrew from it shortly after its conclusion due to a lack of funding. The U.S. Marine Corps part of the program, meanwhile, continued and the Marines ordered the vehicle in several distinctive variants:

The contract was signed and the U.S. Marine Corps received 758 LAV vehicles between 1982 and 1985. According to Jane's, a total of 880 vehicles of the LAV series were built for USMC between 1984 and 2003 (including the later signal jammer LAV-MEWSS variant).

The original LAV-25 weighed approximately 12.8 tons and was powered by a 275hp turbocharged Detroit Diesel 6V53T V-6 engine paired with an automatic transmission. Its maximum speed was 100 km/h on the road. It had 4 wheels on each side (Michelin 11x16in Tubeless run-flat tires with central pressure system) and was amphibious. The last feature was important for the Marines (something Alvis did not offer for example) but the vehicle was not capable of swimming in heavy currents or on the seas.

The protection levels of the LAV-25 were fairly low. The welded steel hull was resistant to 7.62mm AP rounds and small caliber shell fragments but little else – that was the cost of high mobility, the ability to swim and air-transportability. It's worth noting that some sources claim the front is resistant to 12.7mm AP rounds and not only 7.62mm. 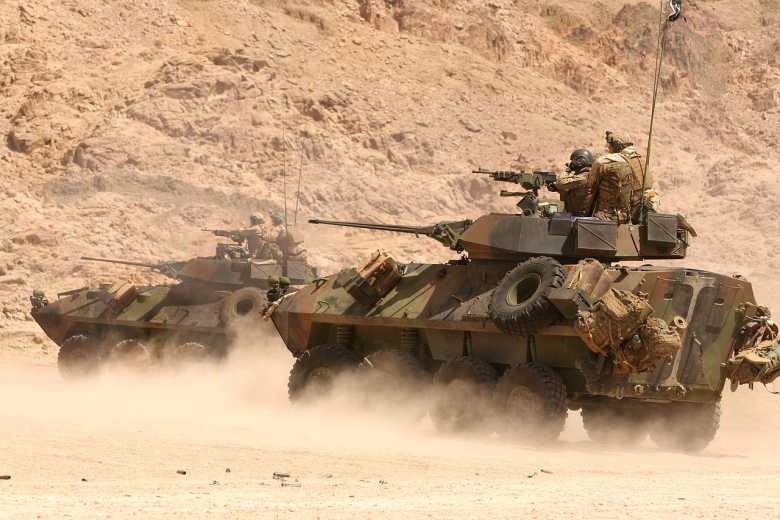 The LAV-25 had a crew of three men (driver, gunner, commander) and could carry 6 troops in the back. Typically it only carried 4 men though – a Marine Scout team. The vehicle was very fast and agile, but was still little more than an armed APC – it was not designed for high intensity combat.

The LAV-25 was a successful vehicle that took part in several major operations such as Operation Just Cause (the invasion of Panama), Operation Desert Storm, Balkan peacekeeping missions and the invasion of Iraq. It was also upgraded over the years but its combat performance and variants are beyond the scope of this article.

To answer that question, we have to go back to 1982 and the original U.S. Marine Corps demands. There was one more variant that was being considered for production – the LAV-AG, or LAV Assault Gun. It was supposed to be a fire support vehicle on a LAV-25 chassis armed with main caliber cannon to provide fire support to the marines.

The problem, as usual for such a light platform, was the recoil. Various tests were run for half a decade from the mid-1980s with different guns (including the 105mm M68, 90mm Cockerill and even 75mm Ares XM274), but the issue was not acceptably resolved. The chassis couldn't handle it. The breakthrough only came in 1990 when Cadillac Gage Textron presented its solution – the 105mm low-recoil L/52 XM35 rifled gun prototype, installed in what was basically a downsized Stingray turret. 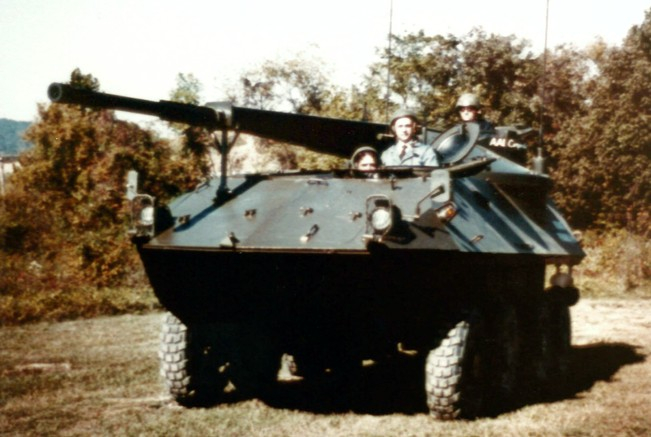 The protection of the turret was comparable to the hull – the sides and rear protected the crew from 7.62mm AP bullets and small caliber artillery fragments, while the front could withstand 12.7mm AP hits. The turret was made of steel, but a different kind to that of the hull because the Cadloy steel was proprietary to Cadillac Gage.

The gun was loaded automatically, removing the need for an additional crewmember compared to other LAV models. It could elevate to +15 degrees and depress to -8 degrees. It was also fully stabilized and the vehicle was very accurate on the move. The gun and turret were both traversed electrically, which solved the burning hydraulic fluid issue known from earlier American vehicles, significantly increasing crew survival chances.

The gun could fire standard 105mm NATO ammunition and the rate of fire was approximately 8 rounds per minute for the 8 shells stored in the autoloader's ready rack. The vehicle carried 30 shells in total (including those in the ready rack).

Mobility was roughly the same as that of the LAV-25, but the vehicle was heavier and with its 16 tons it was too heavy for standard USMC transport helicopters. It is also very likely that it lost its swimming ability, although there is no clear evidence to confirm that. 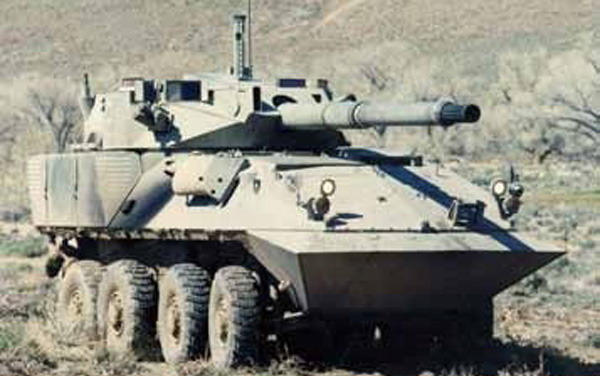 Three LAV-105 prototypes were built and tested in May 1992. While they performed well and met all the requirements for firing accuracy (including on the move), the vehicle was never adopted in service.

The military budget cuts of the early 1990s were, as usual, partially to blame for that. With the Cold War over, many military programs (including very promising ones) were cancelled in favor of keeping older designs in service for a longer time before attempting to replace them with brand new models. Another issue was a design one. It was later found that even with the XM35, the stress the recoil put on the suspension caused the steel to fracture and break down, resulting in very high maintenance costs.

These two issues meant the LAV-105 (or any other LAV-AG) model was never adopted by the military and the requirement was quietly dropped in the mid-1990s.

In Armored Warfare, the LAV-105 will be a high-Tier non-progression Tank Destroyer.

A chemical plant located deep in the Mojave Desert has to be captured at all costs!