The December of 2020 will bring another Battle Path. This time, the general theme (as the entire new season itself) will be the post-apocalyptic world that came from the super-volcano explosion at the end of the Spirithaven Special Operation. This will not only reflect on the upcoming skins and the general artistic feel of the Battle Path, but also on the vehicles themselves – because let’s face it, what kind of machine would you want to find yourselves in during an apocalypse? A rugged one, of course – and few military vehicles are as rugged as those coming from Russia.

That is why the vehicle pool of the next Battle Path will be Russian and today we are beginning to unveil its composition, starting with a rather interesting vehicle called Kurganets-25. 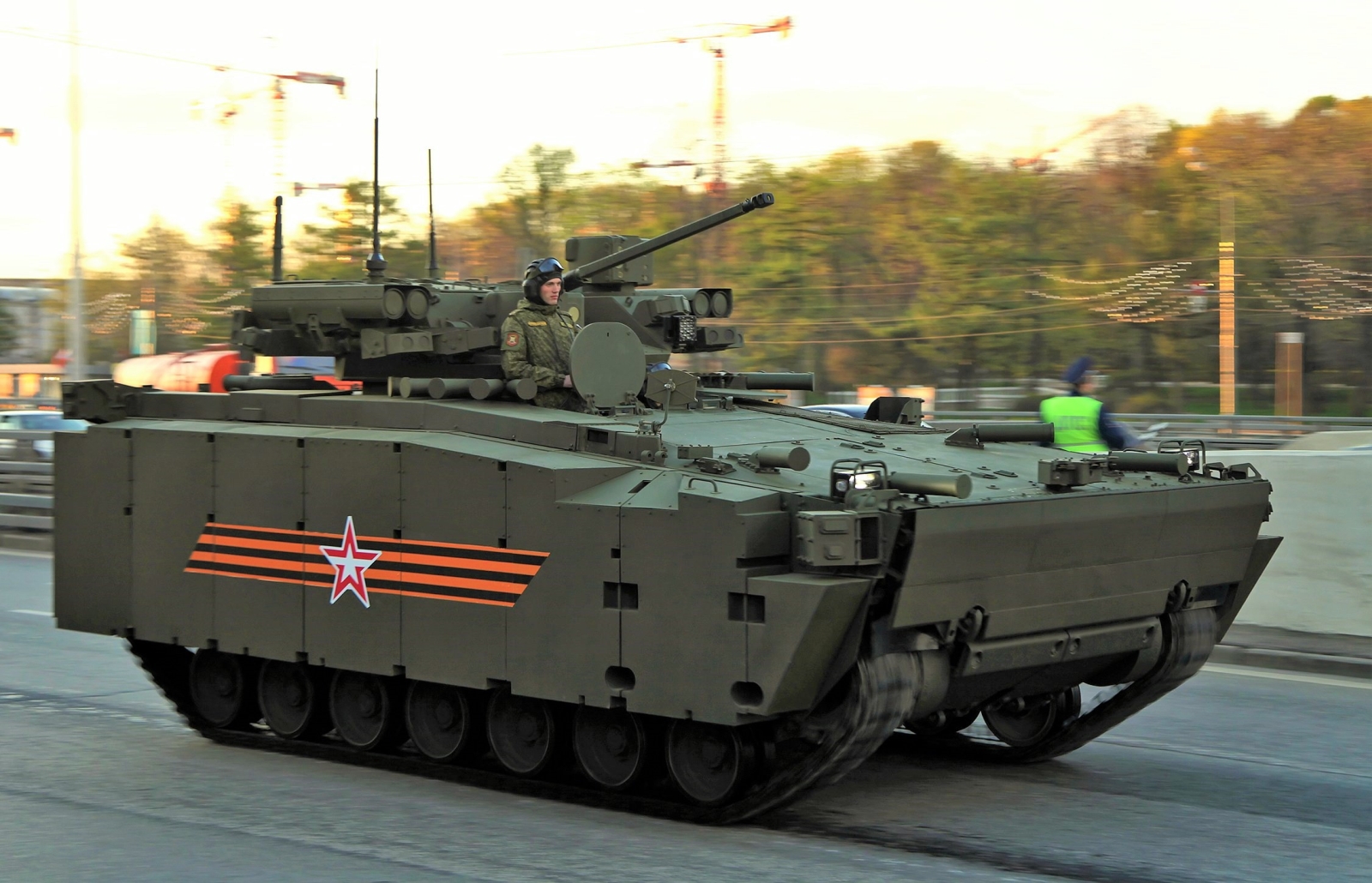 A little history first, as usual.

Kurganets-25 is intended as a cutting edge future replacement to the old BMP series in Russian service. Its name comes from two sources, which its place of origin (Kurgan, a city in the Ural Mountains) and its weight of 25 tons. While not as chunky and expensive as the T-15 Armata super-heavy IFV, it’s designed to finally offer the 21st century protection levels the Russian military has been demanding for a long time. It was deemed that the developing company (Kurganmashzavod) had plenty of experience to make such a vehicle work since it’s also producing upgraded BMP-3 IFVs for the Russian military.

Unlike various previous attempts at well-protected IFVs such as the Dragun, the Kurganets is an entirely new design. It originally came in to configurations – a lightly armed APC for 8 troops and an IFV for 6-7 troops. Other configurations (such as a 122mm self-propelled gun, a 125mm tank destroyer or a 57mm anti-aircraft version) were also proposed, but nothing really came of it.

Both versions are well-protected by an optional ERA kit and the IFV was also presented as being able to carry a scaled-down version of Armata’s Afganit hard-kill APS. This system was mentioned in 2017 to be able to intercept kinetic shells but this ability is still currently not confirmed. Despite its low weight, its hull design was optimized to provide extra protection against IEDs and mines, something the older BMPs lacked completely (any BMP is one of the most vulnerable IFVs still in service when it comes to this kind of threat). At the same time, the vehicle is amphibious since it was also supposed to replace the Russian Marines’ BMP-3F.

The vehicle is powered by a 12.4 liter 6-cylinder 750hp YaMZ-780 engine mounted in the front, further increasing its crew’s protection. It has a maximum speed of some 80 km/h. The maximum swimming speed is estimated at 10 km/h. The engine was not the first choice but the actual intended engine for the platform by ChTZ never materialized.

It has a crew of three men – driver, commander and a gunner, the latter two operating a remotely-controlled Bumerang-BM turret, armed with a 30mm autocannon and Kornet guided missiles. It’s worth noting that some sources name even the 30mm Kurganets turret “Epokha” (or “Epokh” in some older articles). For all intents and purposes, they are the same weapon system.

The APC version is armed only with a small remote-controlled machinegun turret. The turret is completely isolated from the troop compartment so that, unlike in the older BMPs, a catastrophic ammo explosion does not kill the carried soldiers.

The development of this platform started in the early 2010s and a prototype (first delivered in 2013 or so) was unveiled along with the Armata vehicles during the famous 2015 Victory Day military parade. Initial reports claimed that the Kurganets would be module compatible with the Armata platform to reduce the costs of both, but this turned out not to be the case. 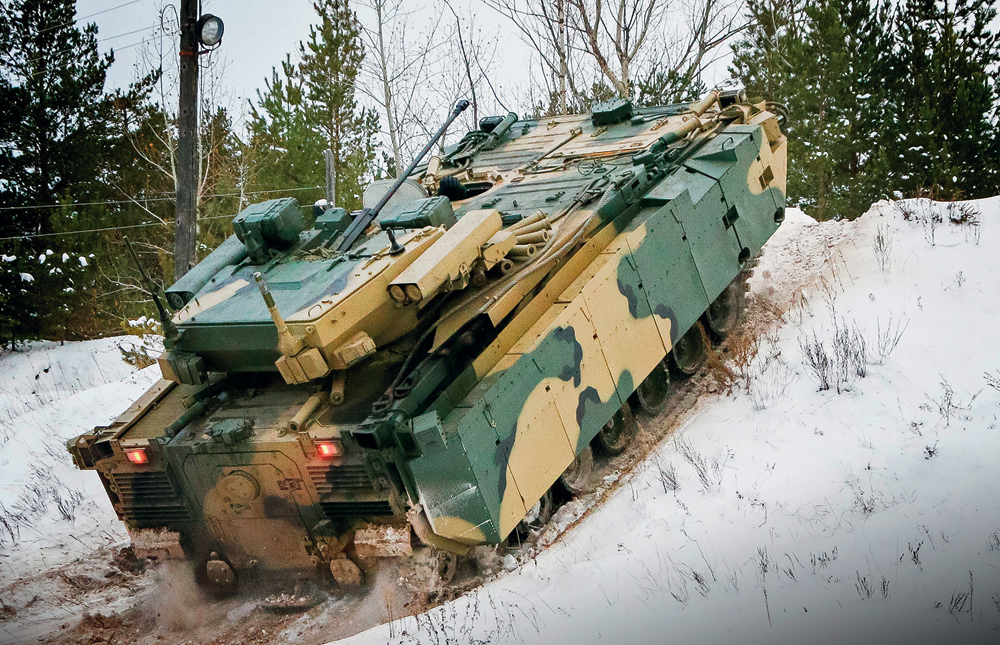 The original plan was to deliver roughly 100 trial vehicles by 2016, finish the state trials by 2017 and to start mass-producing the vehicle for Russian use by 2020. However, the program would turn out to be very expensive for Russia – too expensive.

Kurganets’ production was getting delayed as such:

Kurganmash’s situation was further complicated by the demands to simultaneously upgrade the existing fleet of BMP-1s and BMP-2s and, internally, the company believed in 2018 that its facilities would not be fully re-tooled to Kurganets production before 2030.

In the early 2020, it was unveiled that the ChTZ engine development for the Kurganets and Armata platform was effectively cancelled due to the problems with the 12TV373Ch “Chaika” engine that turned out to be worse than the A-85-3A engine it was supposed to replace. This left the Kurganets project in a major pickle since further delays would be inevitable and the original YaMZ-780 engine would be needed after all.

In September 2020 it was finally decided to effectively shelf the whole program and to upgrade the existing fleet of old BMP-2 IFVs with a new combat module called Berezhok to the BMP-2M standard along with further acquisitions of modernized BMP-3s. 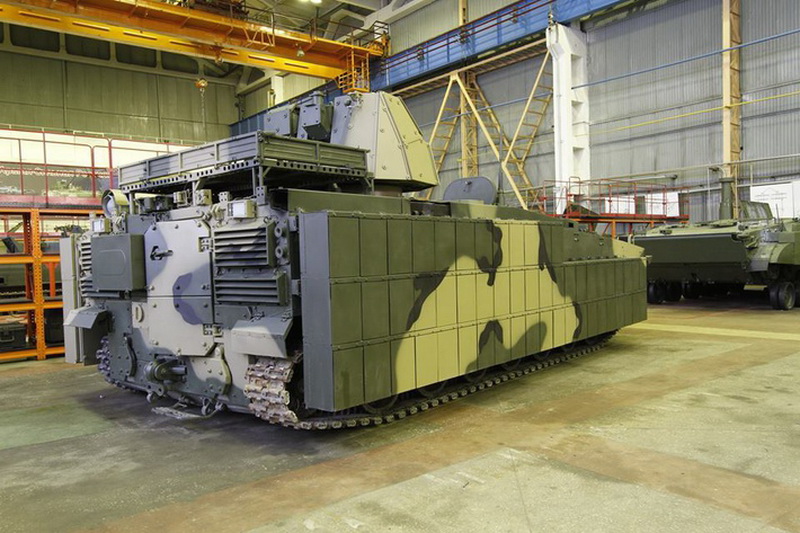 Considering the shift of attention to a newly developed (and considerably cheaper) upgrade of the BMP-3 called BMP-3M Manul, the lack of production facilities and the general cost of the program, the fate of Kurganets-25 seems to be all but sealed.

A few more words about the in-game version of the Epokha turret (sometimes transcribed Epocha or Epoch). This turret apparently evolved from the Bumerang-BM combat module (or is another name for it since plenty of sources use them interchangeably). 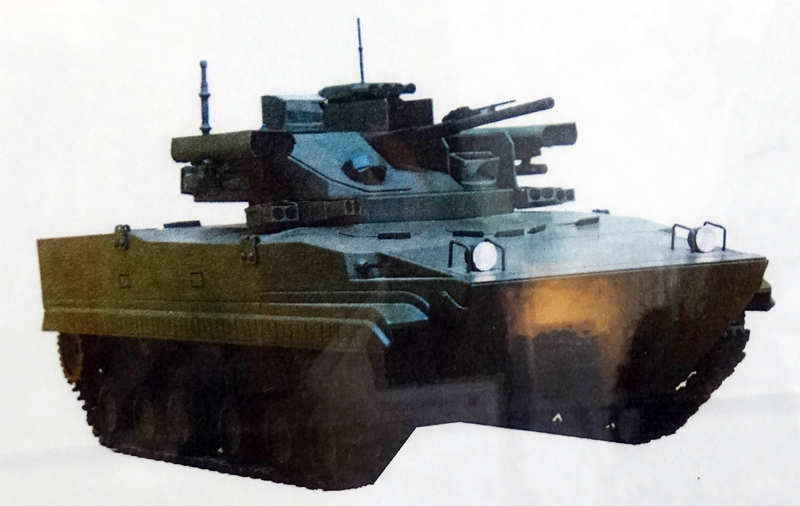 The 57mm LShO-57 autocannon isn’t really an autocannon per se; it’s more of a grenade launcher. Its designation (APGB – automatic gun with grenade-launcher ballistics) confirms as much. Despite this fact, it can fire 3UBM21 APDS rounds along with the 3OF91 HE rounds. Their actual parameters are not known. The vehicle carries 72 such rounds. The interesting part here is the ballistic curve of these shells combined with their relatively low velocity. 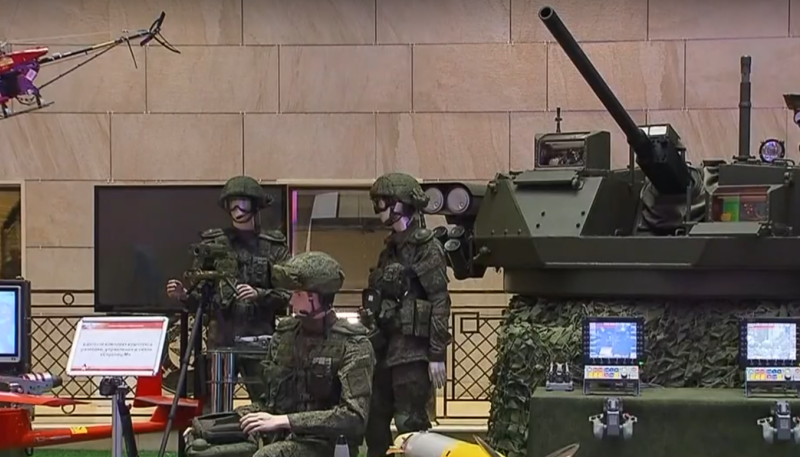 The Kornet ATGMs are fairly well-known. What is new, however, is the 9M134 Bulat ATGM. Its caliber is not known, it is estimated to be between 60mm and 80mm. The turret carries 12 such missiles. The actual purpose of this system is engaging softer targets at longer ranges. The “autocannon” has its ballistic properties somewhere between an actual gun and a grenade launcher, making engaging moving targets at medium-to-long distances difficult. Bulat ATGMs are intended to remedy that. 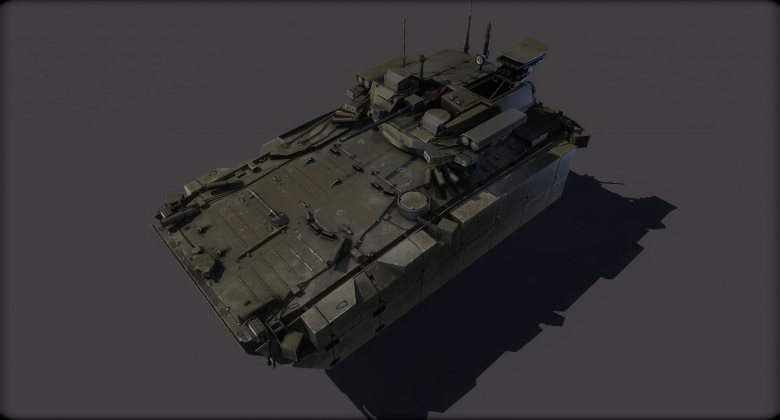 In Armored Warfare, Kurganets-25 will be a Tier 9 Premium Tank Destroyer. Now, considering this is an Infantry Fighting Vehicle in real life, you might be asking at this point why we chose to introduce it as a TD. The answer is that given the presence of many unique weapon systems on this vehicle, we decided to give it a rather unique battlefield role, akin to the QN-506. Nevertheless, it will be possible to deploy Mechanized Infantry.

In short, this vehicle will play sort of like a Terminator, only with less armor but more (or, rather, more diverse) firepower. 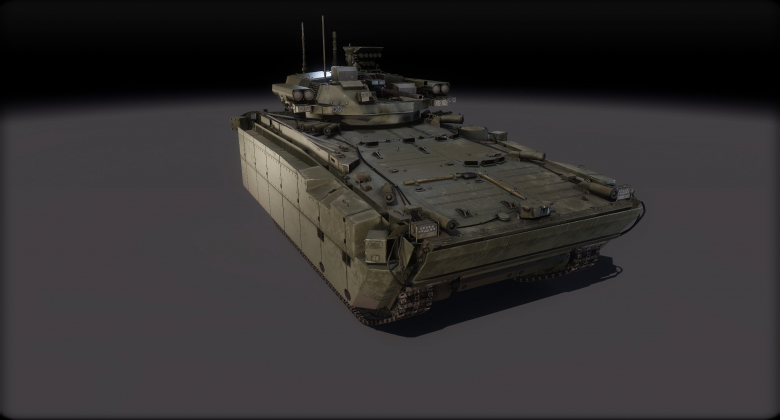 Protection-wise, it will of course still be something of a heavy IFV and that usually means steel armor that can’t take a lot of damage. Fortunately, Kurganets will have two things going for it:

That’s right; this TD will be protected by roughly the same system as everyone’s favorite, T-15, including the option to activate the Supercharged hard-kill APS ability. Despite the lack of actual armor (which will be roughly comparable to BMP-3M), Kurganets will offer good survivability at long ranges. Given its class, it’s obviously not intended for short-range combat and if it finds itself in one, either it’s not being used correctly or the game is already in its last seconds. 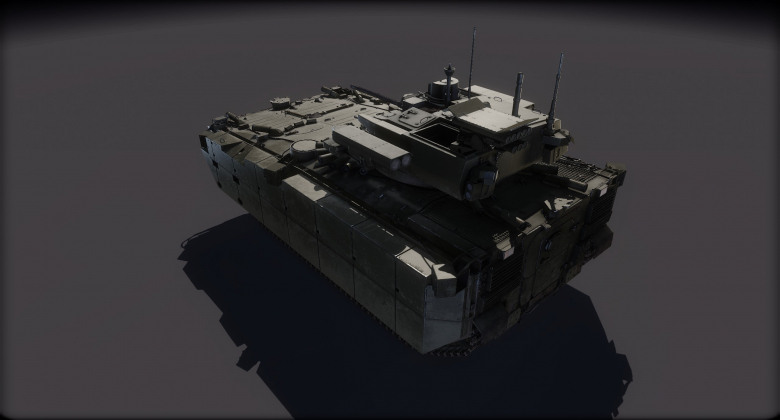 Its mobility will correspond to what is written above – as a Tank Destroyer, the vehicle will not be extremely agile or fast with its maximum speed being 70 km/h. Compared to some other TDs, it will still be quite mobile, but not as much as an AFV.

Where it will really shine though will be its firepower, which will consist of three weapon systems:

The turret will also feature average gun depression and excellent elevation (-5/+60 degrees). Last but not least, the vehicle will have average camouflage factor and class-appropriate viewrange (but will excel in neither).

All things considered, the Kurganets TD will be an excellent fire support platform the way it was intended in real life. Thanks to its diverse firepower, it’ll be able to deal some damage at most ranges, even though it is intended to fight at longer ones. Despite some similar characteristics with its heavier T-15 counterpart, it won’t be able to fill the same role by protecting the team with an MBT-like armor, but will instead have to stay behind a bit to do what it does best. Mechanized Infantry will, of course, only add to its value to the team and with the recently introduced ability to direct infantry fire, we are looking at a very potent damage dealer that will surely come in handy in any group.