There are two kinds of IFVs currently being used by the militaries across the world. The first kind is the upgraded Cold War types like the Russian BMP series or the American Bradley. Designed for a large-scale conventional war, these vehicles are often, in their basic form, poorly protected and have to rely on additional armor kits (sometimes developed by a third party) to keep their combat value on a modern battlefield.

The second kind is post-Cold War IFVs that focus heavily on the protection of both their crews and passengers. Their development copies, to a degree, the one of the MBTs with ever increasing armor requirements causing increases in combat weight. They are generally quite large, well-protected, jam-packed with electronics and very, very expensive. The South-Korean K21 IFV definitely belongs to the latter group.

The K21 was developed in the 2000s to replace the K200 “Korean Infantry Fighting Vehicle” series. Despite its long name, the K200 was a little more than a kitted M113 with some additional bits, making it much more an APC than a true IFV and the K21 came to change that. In this article, however, we are not dealing with the IFV itself, but rather a light tank built on its chassis that came much later.

Around 2012, Doosan DST (the producer of the K21) decided it would be a rather cool idea to have an export-oriented fire support vehicle (or a light tank, depending how you look at it) in its portfolio. That, however, meant adopting a different turret than the one original K21 one – something with a lot more punch. A relatively simple solution presented itself – to mate the K21 hull with an existing third party turret. And so Doosan DST reached out to CMI Defense (commonly known under the name of Cockerill), a Belgian company producing entire weapon systems, including the popular CT-CV and XC8 turrets the Armored Warfare players know from the two WWO Wilk vehicles that appear in the game. CMI agreed to cooperate with Doosan and, in February 2013, a privately financed export light tank appeared on an expo in the United Arab Emirates.

To call the light tank a prototype would likely be an overstatement – it was something between a mock-up and an actual prototype, a working proof of concept. It consisted of a K21 hull with an XC8 turret on it.

The hull was not heavily modified – the troop compartment was simply converted to carry ammunition.

The entire vehicle weighed 25 tons only even with the bigger turret, which reflected on the protection levels. The hull was likely made of a fiberglass-aluminum composite (no actual data on the composition of the K21 armor have been published and various sources claim various things), offering STANAG level 5-6 protection – the vehicle front is allegedly resistant to 30mm APDS shells from the Russian 2A72 autocannon (the long one the BMP-3 is armed with). The sides should be resistant to 14.5mm AP bullets.

The two-man XC8 turret was made of welded steel, offering basic STANAG level 3 protection (against 7.62mm AP bullets) but could be customized with additional armor plating to match the protection level of the hull.

Further protection was provided by a Galix smoke grenade launcher system in the turret as well as:

A hard-kill APS was also offered as a potential upgrade.

The turret could have been armed with two different optional weapon systems – a 105mm gun and a 120mm gun. In Armored Warfare, only the 120mm variant is present. Much like on the Wilk XC8, the main weapon was the Swiss RUAG 120mm L/50 Compact Tank Gun smoothbore, capable of firing standard NATO 120mm ammunition as well as a 120mm version of CMI’s Falarick gun-launched guided missile. The Falarick missile had a range of 5 kilometers and was co-developed with Ukraine – its tandem warhead could penetrate around 1000mm of armor (after defeating the target’s ERA) but possibly even more. Its flight velocity was around 300 m/s.

It was possible to depress the main gun to -10 degrees and elevate it to +45 degrees, making engaging even low-flying targets such as helicopters an option. The gun was, of course, fully stabilized, automatically loaded (most of the ammunition was stored in the back of the turret) and was controlled by a modern digital Cockerill FCS, featuring:

If the customer wished so, the vehicle was possible to improve even further with:

The tank was powered by a 750hp Doosan D2840LXE turbocharged V-10 diesel engine, allowing it to go as fast as 72 km/h (40 km/h off-road). An 840hp up-tuned version of this engine was also offered and the vehicle remained amphibious. 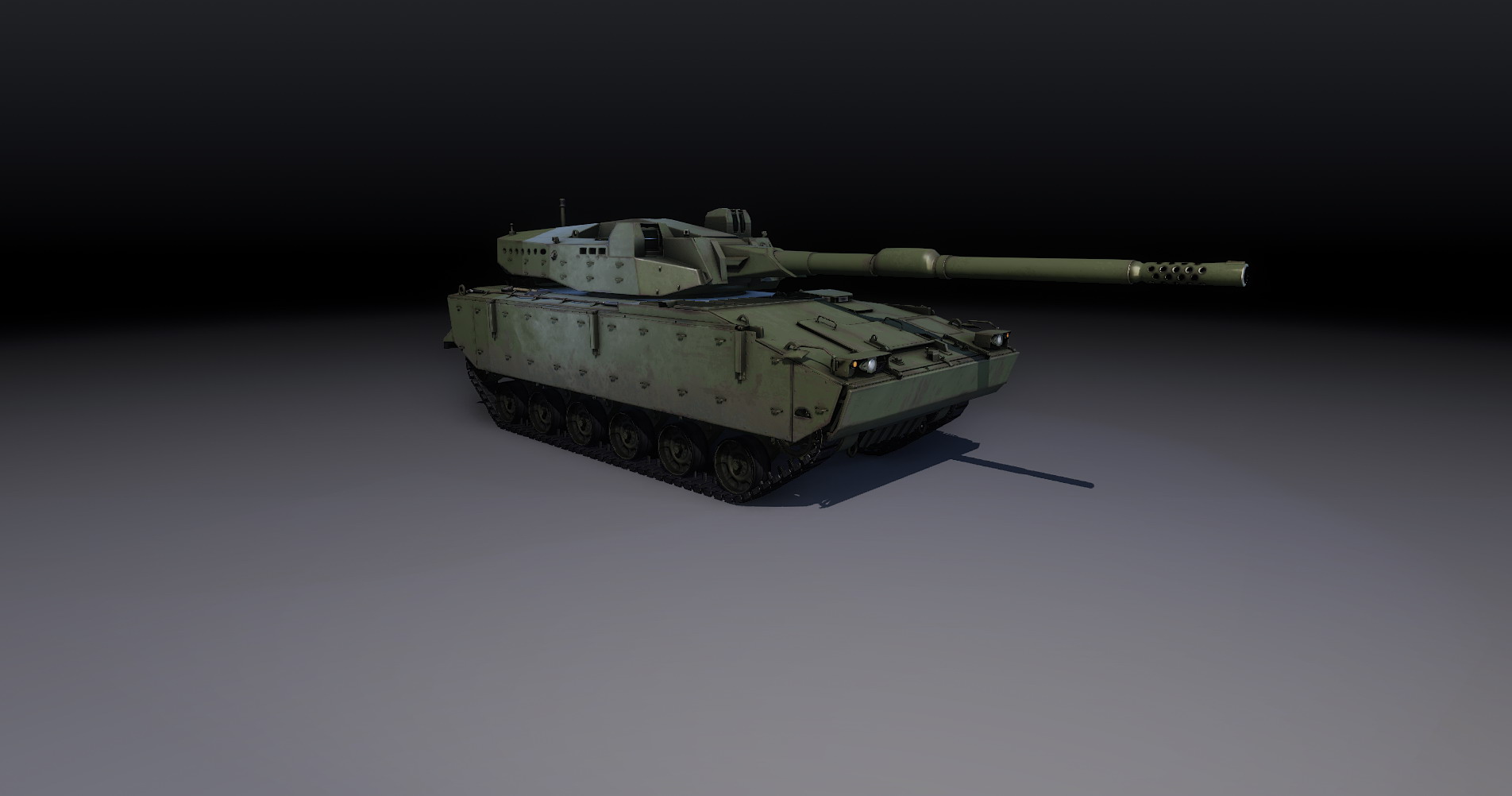 In short, it was a rather capable concept, suitable for modern battlefields – and that’s what it stayed, a concept. After its February 2013 debut, it was also shown in the Republic of Korea in the October of 2013. No further appearances are recorded and neither are any potential contracts. As of now, the vehicle is still offered by Doosan but it seems that it failed to catch any customer interest. There are essentially two things that might be “wrong” with it:

Today, the price of a light tank is often the determining factor – after all, light tanks are in many cases purchased so that (notoriously expensive) MBTs don’t have to be, making an expensive light tank one of the least useful things on the market.

In Armored Warfare, the K21 XC8 will be a Tier 10 progression Light Tank. It has the same weapon system as the Wilk XC8, but unlike the Tank Destroyer, it won’t be able to use the PELE ammunition. On the upside, the K21 XC8 will be more agile and maneuverable than the Wilk thanks to its advanced tracked chassis. Compared to the PL01, it will be less stealthy (it does not feature the ADAPTIV system) but more accurate.

We are proud to present the first preview of the newest addition to Armored Warfare - Update 0.24 “Caribbean Crisis - Part II"