Today, we’d like to show you the first of the high-Tier progression vehicles that are coming during the next season. These vehicles will not be a part of the portfolio of a new dealer – they will, instead, be added to an existing dealer, Oscar Faraday. Each of these vehicles will be unique in its own way – from interesting additional mechanics to entirely new concepts, this group has it all. With that being said, let’s take a look at the first vehicle of our menu – the Griffin Light Tank. 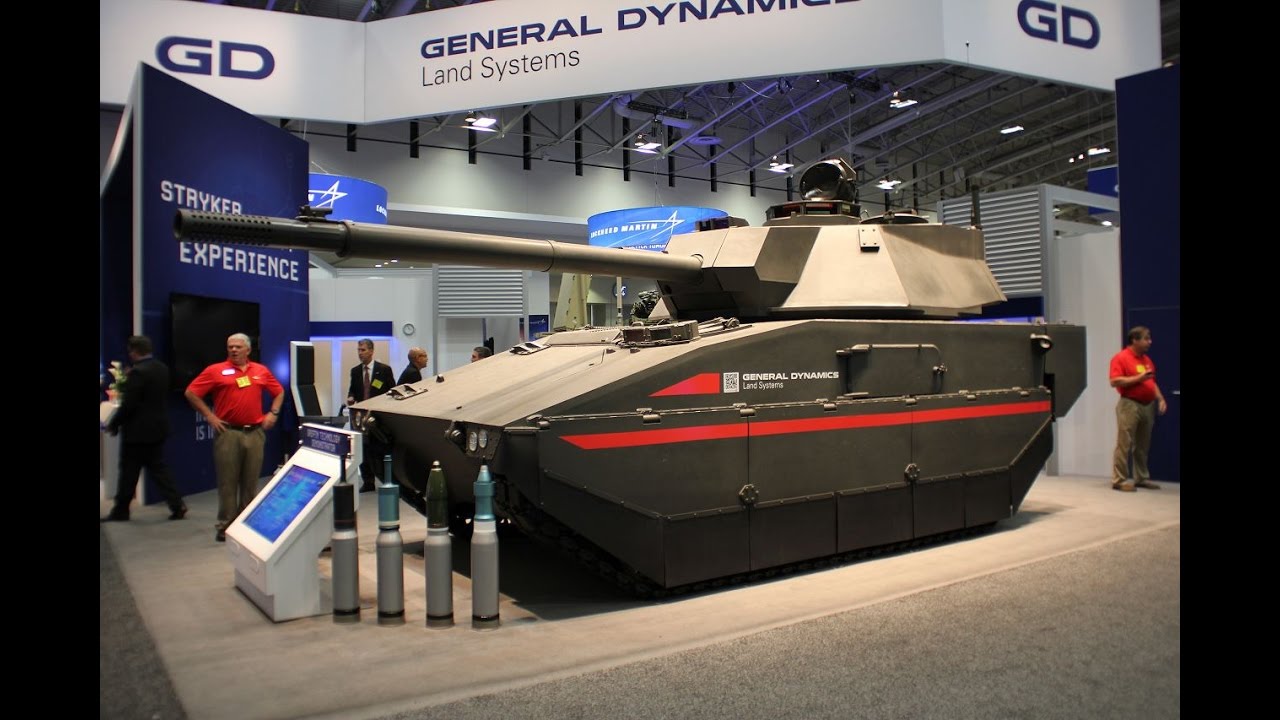 But, let us start from the beginning. In 2014, the NATO forces found themselves in a new reality. The War on Terror ended, and a new era for the western militaries began with Russia once again coming to the forefront of military interest by its involvement in the War in Donbas. Conventional large-scale war, the light NATO anti-terror expeditionary forces were ill-suited for, found its way back into the spotlight, and rapid response to potential Russian attacks became one of the main topics of military discussions.

In the eyes of the west, the most threatened regions were (and are) the Baltic countries – however, both sides of the potential conflict in the region realize that the NATO response options are seriously limited. Measures, such as the creation of the NATO Response Force unit, were taken to remedy that situation, but it is not enough to simply attach troops to a certain dedicated unit – their equipment must be suitable for their task as well.

For the United States Army, it meant the launch of several new programs (limited in their scope in order to not repeat the mistakes of the Future Combat Systems program) and one of them was called MPF (Mobile Protected Firepower).

The goal of the MPF program was – still is, in fact – to provide the U.S. Airborne forces with a highly mobile Light Tank with ample firepower, capable of being air-dropped from the C-130 Hercules. This Light Tank is to replace the Stryker in the Infantry Brigade Combat Team units. But, unlike the older, ill-fated American armor programs that swallowed billions of dollars with nothing to show for, the MFP program prefers existing technology.

The first vehicle to be dusted off for this program was the latest iteration of the venerable M8 Thunderbolt Light Tank that’s been around in one form or another since the early 1990s. Another candidate brought up was the Light Tank version of another older platform, the CV90. But there was also a third sort-of-candidate of which we will talk about today – the Griffin.

With that being said, the Griffin technology demonstrator first appeared in public during the Association of the United States Army (AUSA 2016) conference. By then, it was little more than a slapdash of existing components and cardboard that, after all, took only a few months to assemble. 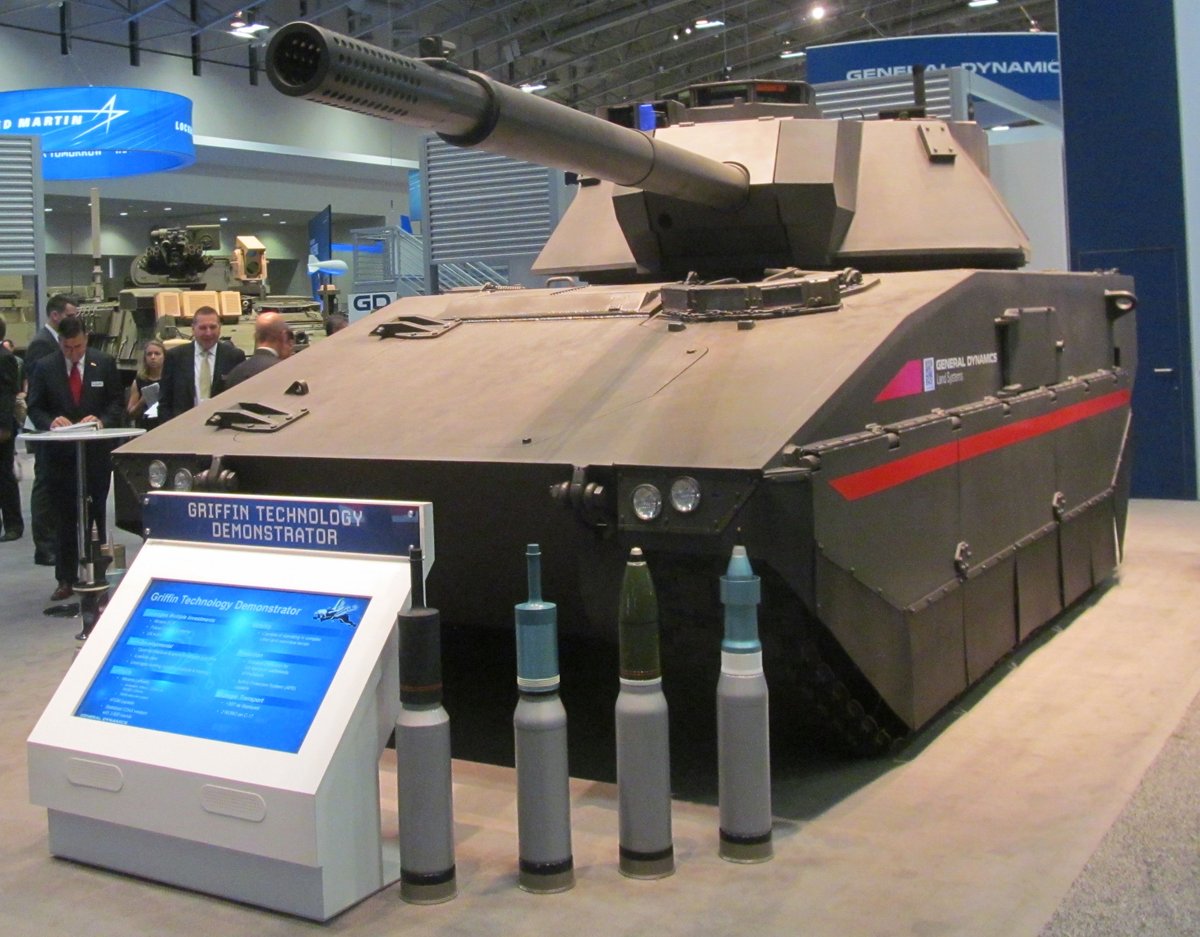 It was built to look impressive and to promote the MPF program since it was coming along slowly and the first-line units it was intended for the most – the 101st Airborne and the 82nd Airborne – needed it to replace the aging Stryker.

The Griffin was built by General Dynamics Land Systems to conform to the requirements laid out by MPF:

The last point was, in a way, a reflection of the Abrams approach. Instead of a hyper-expensive program that would use 100 percent cutting edge technology but end in failure, the U.S. Army wanted something that would be slightly lower tech but considerably more affordable.

The Griffin met those requirements on paper. It was built around another property of the GDLS Corporation – the Ajax platform – with an aluminum turret on top using the same layout and internals as the M1A2 SEP v2 Abrams turret (in order to minimize training requirements) and featuring an experimental 120mm smoothbore gun called XM360.

You might remember the XM360 cannon from our article series about the Abrams MBT – it was basically an attempt to build a gun with similar dimensions and general performance to the already used M256 120mm smoothbore, but lighter and with higher barrel pressure, allowing it to fire more powerful kinetic rounds. The gun was developed during the FCS program with a variant called XM360E1 built specifically to be retrofitted to the Abrams.

The gun was built and tested but never produced en masse, even though the program is still going and it is expected for this gun (or its variant) to appear on a future Abrams variant (unofficially but commonly referred to by press as M1A3). Its abilities also include firing guided ammunition (XM1111) at the distance of up to 13 kilometers.

It’s worth noting that GDLS declared the Griffin to be capable of also carrying a 105mm gun, which would make for a less powerful but, at the same time, much more affordable solution. Interestingly enough, due to the advanced components used in the abovementioned XM360 gun, the 105mm variant would actually weigh more.

The whole thing weighed some 27 tons and was declared to be deployable by parachutes from a C-17 Globemaster III. If you are wondering how something so big can weight so little, it will not surprise you to hear that the vehicle offered protection from small arms only. Additional armor and an APS would make it heavier, of course. 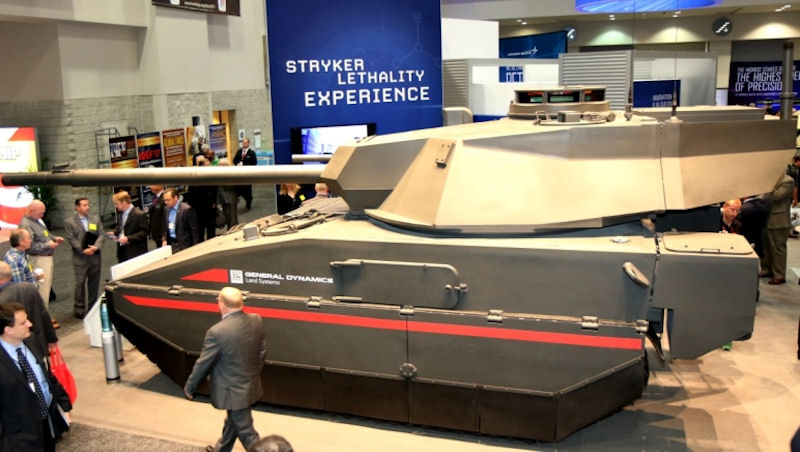 In any case, the whole show seems to have had an effect with the U.S. Army procurement mechanisms awaking from their deep slumber. In 2017, the MPF requirements were refined and amended further, as such:

The parachute deployment requirement was, however, dropped.

The U.S. Army was expected to start issuing actual prototype contracts for this program by 2020 but as it turned out, they’ve been in touch with BAE Systems (responsible for the M8 Thunderbolt) and General Dynamics with their Griffin. A contract for 12 prototypes to be delivered between 2019 and 2020 was signed with both companies with the winner to be decided in 2022 and the first of the 500 planned production vehicles being available between 2024 and 2025.

But that’s not there is to the Griffin.

You see, MPF is not the only U.S. Army armor program currently running. They are looking for a Bradley replacement as well as a part of the Optionally-Manned Fighting Vehicle program. As its name suggests, the goal is to find the next IFV with some robotized capabilities.

This program is quite complicated because, unlike the MFP where a domestic solution exists (sort of) in the form of the M8 Thunderbolt, there are no suitable domestic candidates for the OMFV platform – unless developed from scratch in the U.S.A., the platform would have to come from abroad. The program is being also pushed hard by the military – originally, the Bradley replacement would enter service in 2032 but these goals have changed as such:

All in all, the program’s goal is to replace all 1600 or so active Bradleys as well some Abrams tanks that are currently attached to the Armored Brigade Combat Team units. The requirements are roughly as follows:

As you can see, building such a vehicle will be no small feat.

Nevertheless, one of the vehicles mentioned in connection with this program was a modified Griffin called Griffin III.

This vehicle first appeared in 2018 – two years later after the original Griffin, once again during the AUSA conference and, once again, as a technology demonstrator. 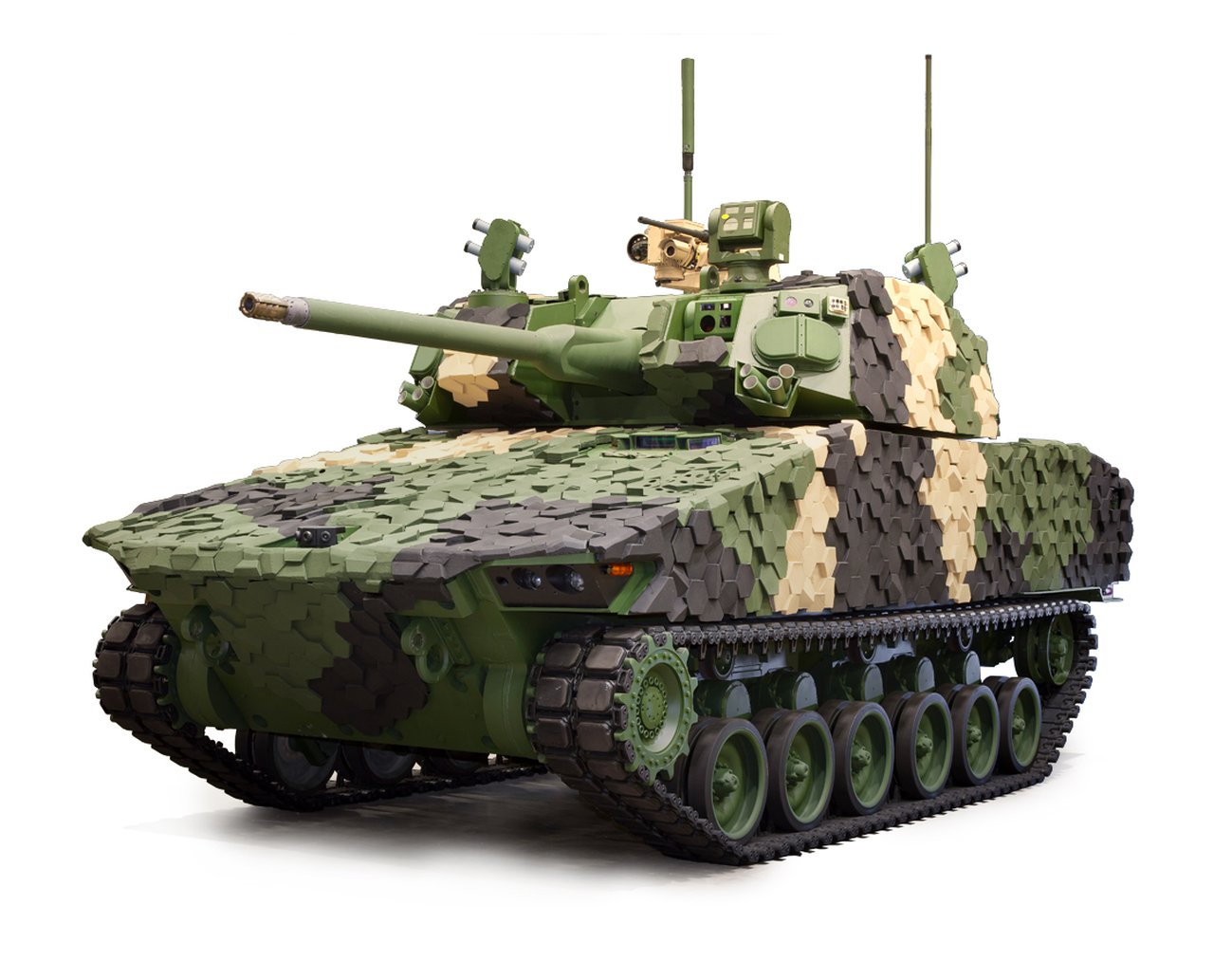 The whole vehicle weighed “less than 40 tons” and was, once again, only lightly protected, but what made it really interesting was its two-man experimental General Dynamics turret co-developed with ARDEC and armed with a 50mm XM913 Bushmaster chain gun by Orbital ATK.

The maximum elevation of the gun was 85 degrees with the depression being -20 degrees, allowing for some excellent urban combat capabilities and the ability to hit targets hiding in tall buildings as well as low-flying targets such as ground support planes, helicopters and drones. The gun can fire different types of ammunition, including programmable HE. The 30mm XM813 cannon was mentioned as an alternative armament.

The vehicle protection was enhanced by the presence of a laser-warning system, an Israeli Iron Fist hard-kill APS as well as with a next generation Tacticam camouflage system by Armorworks. This camouflage is special by not only concealing the vehicle visually, but also thermally (veiling its heat trace) and acoustically (making it quieter). The fuel tanks (located outside of the main hull) are self-sealing.

The vehicle also carried a suicide drone container and cutting edge MX-GCS sights by L3 WESCAM as well as some truly remarkably sensitive sensors, allowing the on-board computer to detect even sniper fire (and where it is coming from). 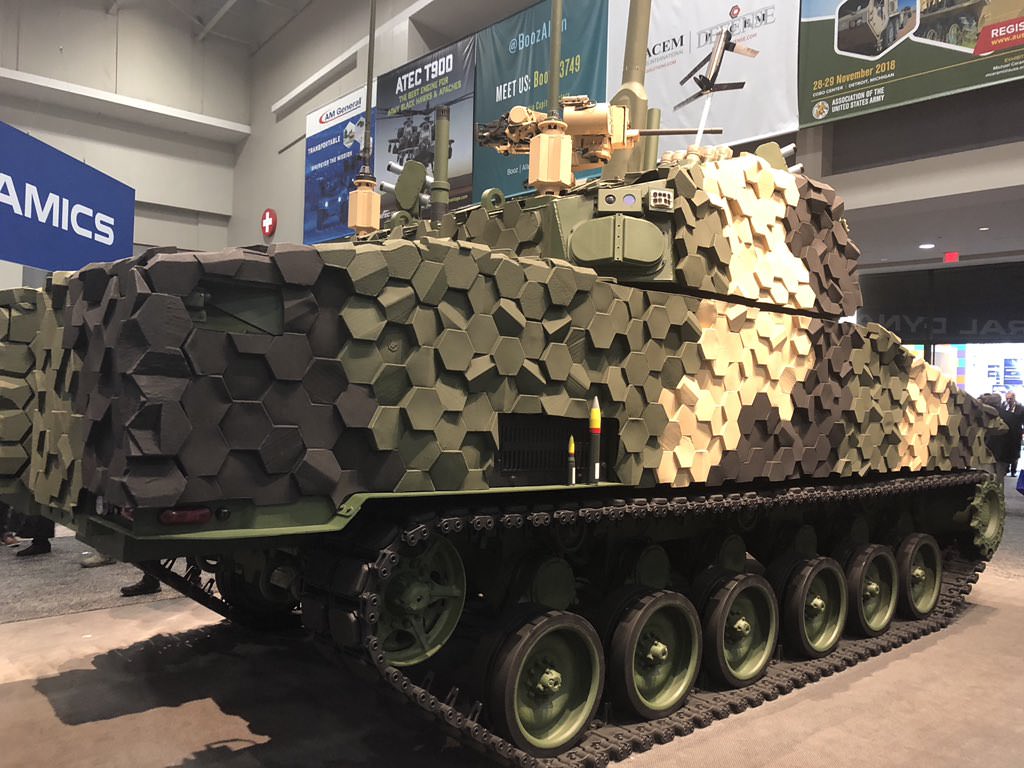 The Griffin could carry six troops alongside its two-man crew – only two men were required due to the use of a “robotic assistant” that could, for example, automatically aim the gun in the direction of incoming fire.

It was powered by a conventional Ajax engine (MTU 8V199 V8 supercharged diesel producing 800hp). Maximum speed was, of course, theoretical, as this was a demonstrator only, but likely would be around 70 km/h. The suspension was based on the Ajax one – only shorter with six roadwheels instead of seven.

The vehicle was received positively but its current status is unknown – whether it will pass the MFP trials remains to be seen.

One thing’s for sure, though – you’ll get the chance to drive the Griffin in Armored Warfare. This formidable advanced platform has much to offer. Since it started in 2016 as a Light Tank, introducing it as one is definitely an option. Or perhaps a heavy Marder-like AFV with a powerful 50mm autocannon? Let us know on Discord which variant you would like to see and what special properties would you give it!

There’s definitely a lot to choose from – an advanced counter-fire system? Some AI-assisted features? That high-tech camouflage from the 2018 model? We’re open to your suggestions and will definitely update you on our progress as we work on the vehicle itself – or, vehicles.

And as for those who would find this vehicle a bit too mundane for their taste – don’t worry, we’re just getting started. We can promise you a lot of excitement by the time the line is fully unveiled.