Today, we’d like introduce you to one character some of you might already know from the Black Sea Incursion Special Operation – Douglas O’Reilly.

Born into a family of Irish immigrants, Douglas O’Reilly grew up in Milwaukee, Wisconsin, during the waning days of the United States of America. Right from the beginning, he was pegged as a troublemaker and served more than one stint in jail for disorderly behavior, petty thefts and other misdemeanors. Cunning and smart, he quickly saw the opportunity to escape his boring life in becoming a mercenary. Eventually, he’d found his own outfit, which he’d called the Evocati after the veteran volunteers of ancient Rome. 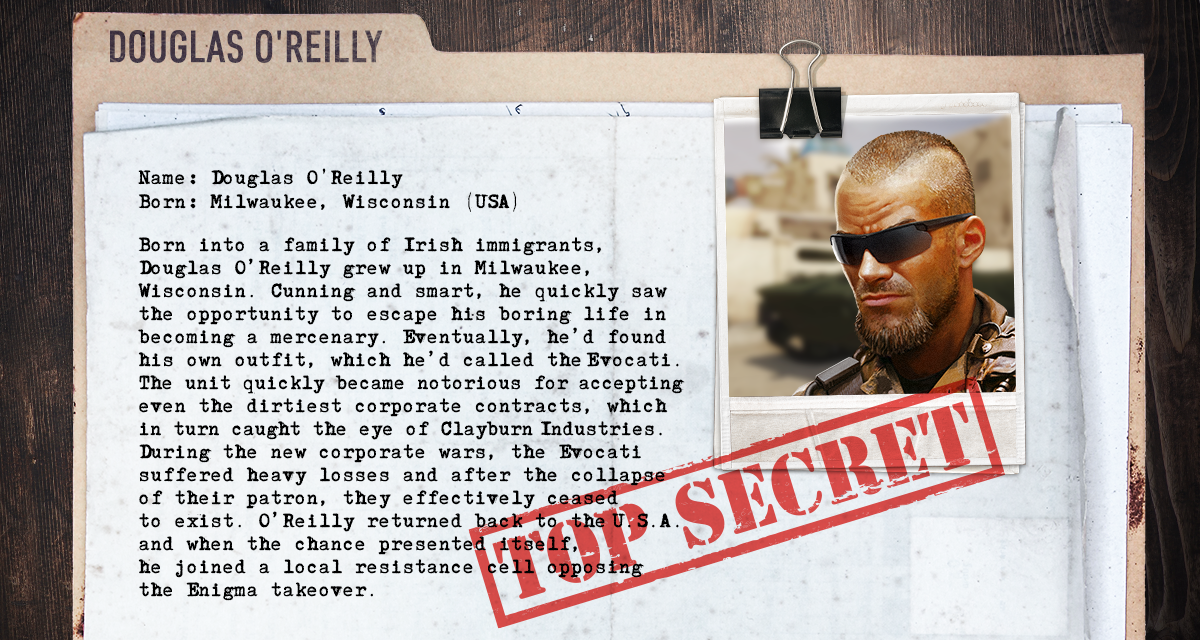 The unit quickly became notorious for accepting even the dirtiest corporate contracts, which in turn caught the eye of Sebastian Grimm, the villainous CEO of Clayburn Industries. During the new corporate wars he had unleashed, the Evocati suffered heavy losses. After the collapse of their patron, they effectively ceased to exist and O’Reilly returned back to the U.S.A. However, such a man as O’Reilly couldn’t stay away from fighting for long – when the chance presented itself, he joined a local resistance cell opposing the Enigma takeover.

Douglas O’Reilly will be possible to unlock from the M48 GAU-8 Tier 10 Tank Destroyer that is coming in Update 0.30 to Oscar Faraday’s vehicle pool and will be a defensive commander at heart with an interesting role on the battlefield. He’ll be very useful for stopping oncoming rushes, but will not push you to rely on camouflage – quite the opposite. Douglas O’Reilly likes to be seen. He is a shrewd commander who likes to be in the thickest fighting, pushing his troops with yelling and, if required, kicks and prods.

As such, he will feature an interesting new skill.

Within a certain radius of his vehicle, the performance of his teammates (specifically, their damage output) will be boosted as long as his own vehicle is not moving.

His other skills boost his vehicle, crew and module hitpoints as well as crew saving throws and view range bonuses (along with further penalties to camouflage), making him essentially a commander that’s ideal for machines that can take a punch or two but focus mostly on damage output (such as Faraday’s new Tank Destroyers). He is, however, not suitable for machines that have to rely on camouflage or very high speed to survive.

It’s worth noting that the area team buff skills on multiple vehicles do not stack – if multiple vehicles with the same commander band together, they will all be affected by the strongest buff active in the area. Same rule applies to any debuffing area effects in the game.

We hope that you will enjoy Douglas’ comeback and will see you on the battlefield!