Before we talk about the ultimate prize of the Northern Wind Battle Path, let’s take a quick stop at the vehicle that will be available via blueprints. Like before, the blueprints will be available in the Battle Coin shop (with its expanded and improved inventory) or for completing the Elite mission chains. The vehicle in question is the CV90120 Ghost Light Tank. 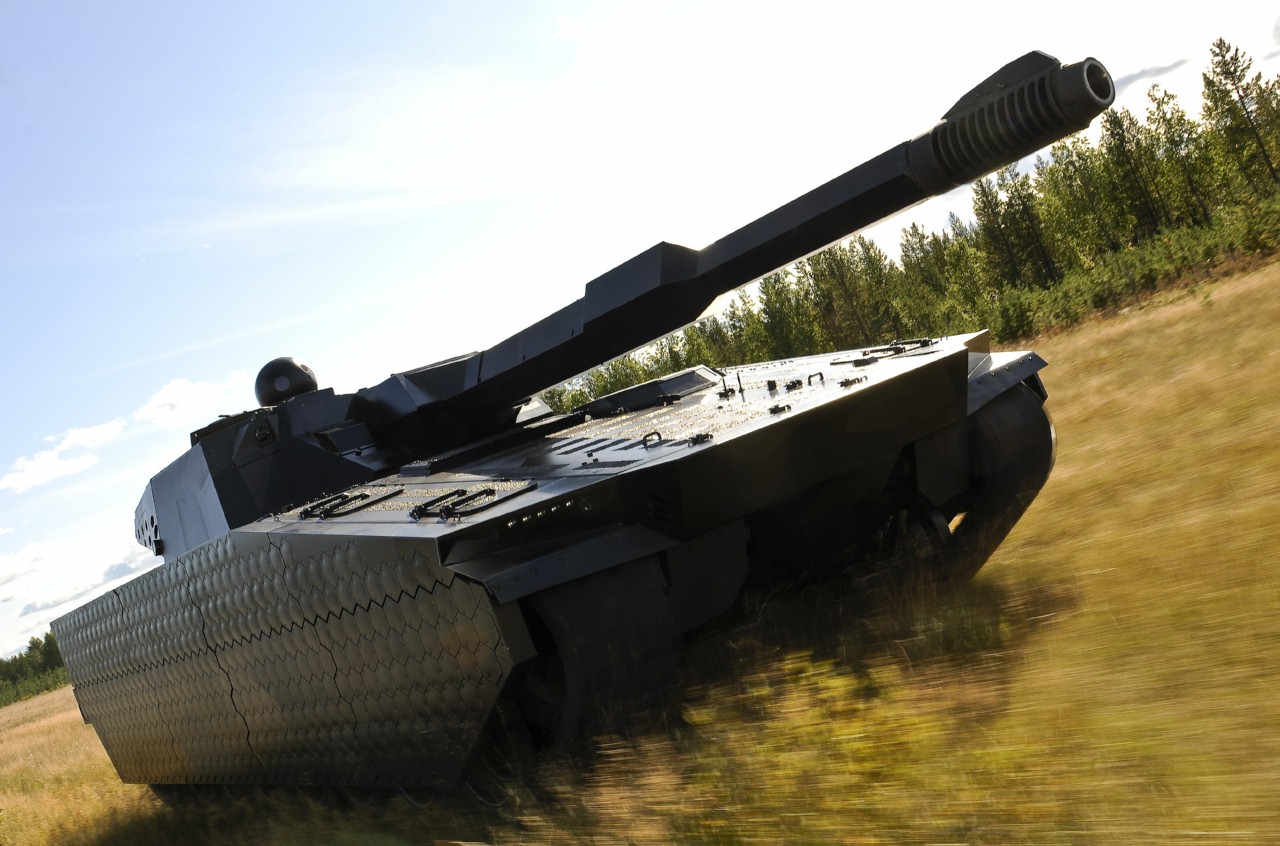 As you could have guessed by its name, the CV90120 Light Tank (sometimes also called CV90120T where the letter T stands for “Tank”) consists of the CV90 platform and a turret armed with a 120mm cannon. Of course, the attempts to convert the CV90 chassis into a Fire Support Vehicle have been around since the mid-1990s (starting with the CV90105 TML prototype), but the CV90120T was the first attempt to become fairly widely known.

It was designed in the late 1990s as a private venture between BAE and Hägglunds (at the time a subsidiary of Alvis Vickers) before BAE acquired Hägglunds in 2004. The idea was to create something lighter, more mobile and cheaper than an MBT, which could ideally replace it. It wasn’t timed perfectly as the War on Terror, which saw the NATO military shift towards counter-terrorism operations, would only come years later, but still had enough potential for BAE to invest significant sums into it.

The prototype was only lightly armored (frontal protection against 30mm autocannons, sides against 14.5mm bullets only), even though its protection was enhanced by a soft-kill APS consisting of a laser warning receiver connected to smoke grenade launchers. What made it interesting was the double layer shell, which (thanks to its sharp shape) significantly reduced this vehicle’s radar and IR signatures.

The CV90120T weighed some 26 tons and was powered by a 670hp Scania V8 diesel, allowing it to go as fast as 70 km/h and 43 km/h in reverse. It had a crew of four and was armed with the L/50 version of the Swiss 120mm RUAG Compact Tank Gun. Despite being compact enough to be possible to use in such a light vehicle, the gun could fire standard 120mm NATO ammunition, including advanced APFSDS and HEAT-MP shells. The gun could elevate to +22 degrees and depress to -8 degrees. It was operated by a rather advanced Fire Control System with the hunter-killer capability and advanced electronics.

The first prototype was available in mid-1998 with the vehicle participating in Swedish military trials later that year. Further trials followed between 1999 and 2000, but nothing really came from them. It was one of those cases where everyone likes something but nobody really wants to buy it. Doctrinally, the CV90120T didn’t really fit anywhere and more than one military got caught in an internal conflict between the opponents of classic MBTs (citing them obsolete and preferring faster and lighter vehicles such as the CV90120T) and their proponents, who argued that operating MBTs was not only a matter of doctrine, but also of prestige. A good example of such an early conflict would be the fate of the Polish Anders platform.

Regardless, the CV90120T did not die and updated versions continue and are marketed to this day, including one that’s typically referred to as CV90120 Ghost. Note how the letter T was dropped from its designation by BAE. 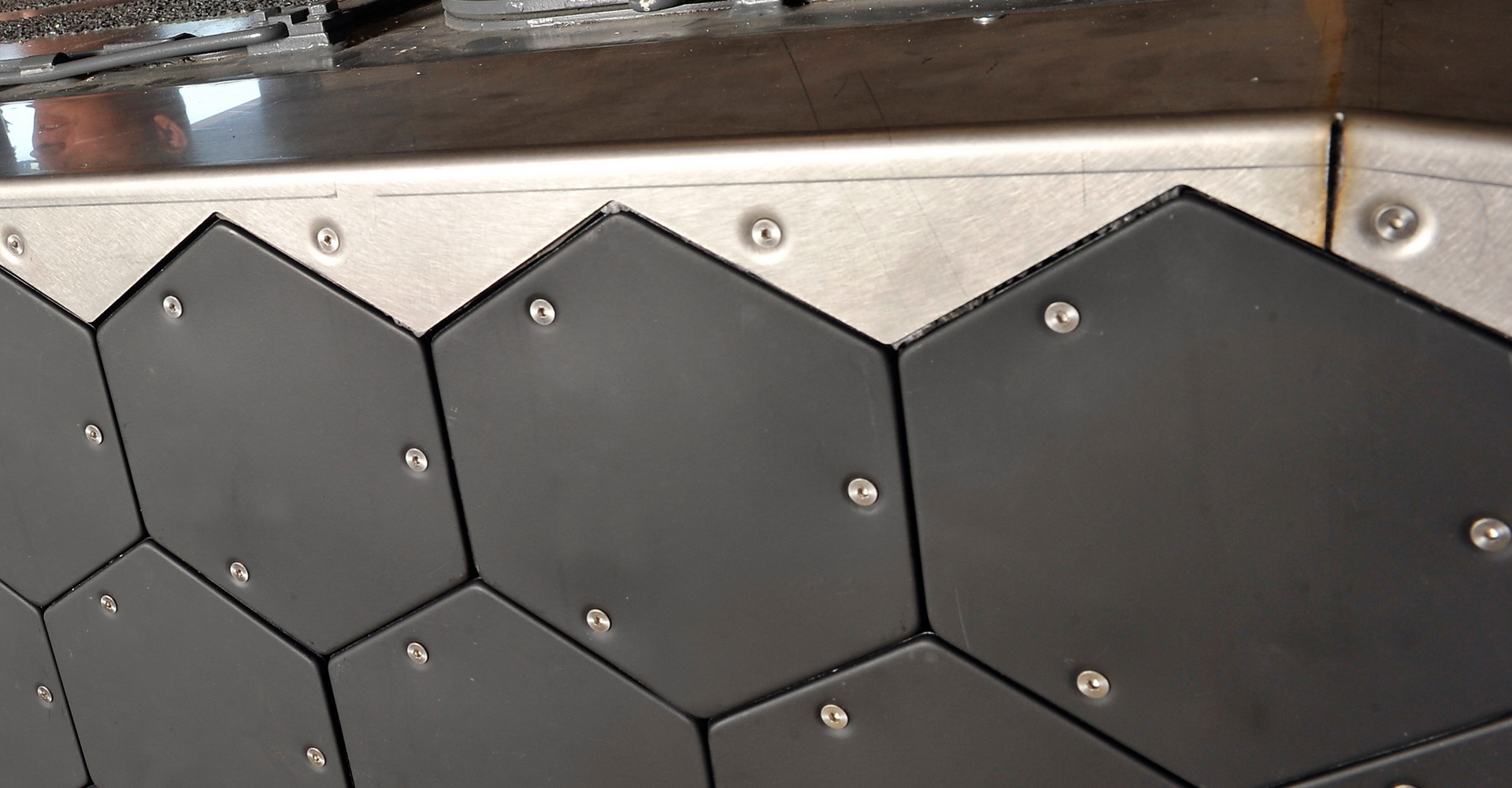 The Ghost more than lives up to its name, as it emphasizes stealth over protection. It is a demonstrator of mating the already stealthy CV90120T with a camouflage system called ADAPTIV. ADAPTIV was a system that was capable of not only hiding the vehicle in the IR spectrum using a wide range of sensors and hexagonal cells that conceal the vehicle’s true signature and even project false images in the IR spectrum. That way, the Ghost can appear to a thermal imager like a car or a van. The rest of the CV90120T’s surfaces were changed as well to reduce its radar signature even further, giving it that stealthy and futuristic look.

The gun was also upgraded to a shorter but more advanced version of RUAG’s CTG, the L/47. It can elevate to +22 degrees and depress to -8 degrees. The Scania engine was upgraded to crank out some 800hp, although the maximum speed of the Ghost remains the same. The tank retains its 4-member crew; the gun is manually loaded, although there’s an assisting mechanism in place, allowing the vehicle to fire 12 to 14 rounds per minute. All standard 120mm NATO rounds are, of course, supported.

The development of the ADAPTIV camouflage system began in 2008, but it wasn’t only until 2011 before the Ghost prototype appeared in public. It took the world by storm with numerous videos of its ADAPTIV capabilities being available around the internet. In fact, it became one of the best-known CV90 variants overnight thanks to its coolness factor and... nothing. Nobody really wanted to buy it. The ADAPTIV kit is offered as an option to this day, as is the CV90120 itself, but it’s unlikely it’ll ever see any service.

There are several reasons for that. For one, the vehicle is extremely high-end and few are likely even able to afford it. This sort of defeats the affordability argument behind the whole FSV concept. As a result, it’ll likely never become battle-proven and vehicles without any combat record aren’t exactly popular, especially when it comes to costly “gimmicks”. The ADAPTIV kit is simply too costly for mass-production. 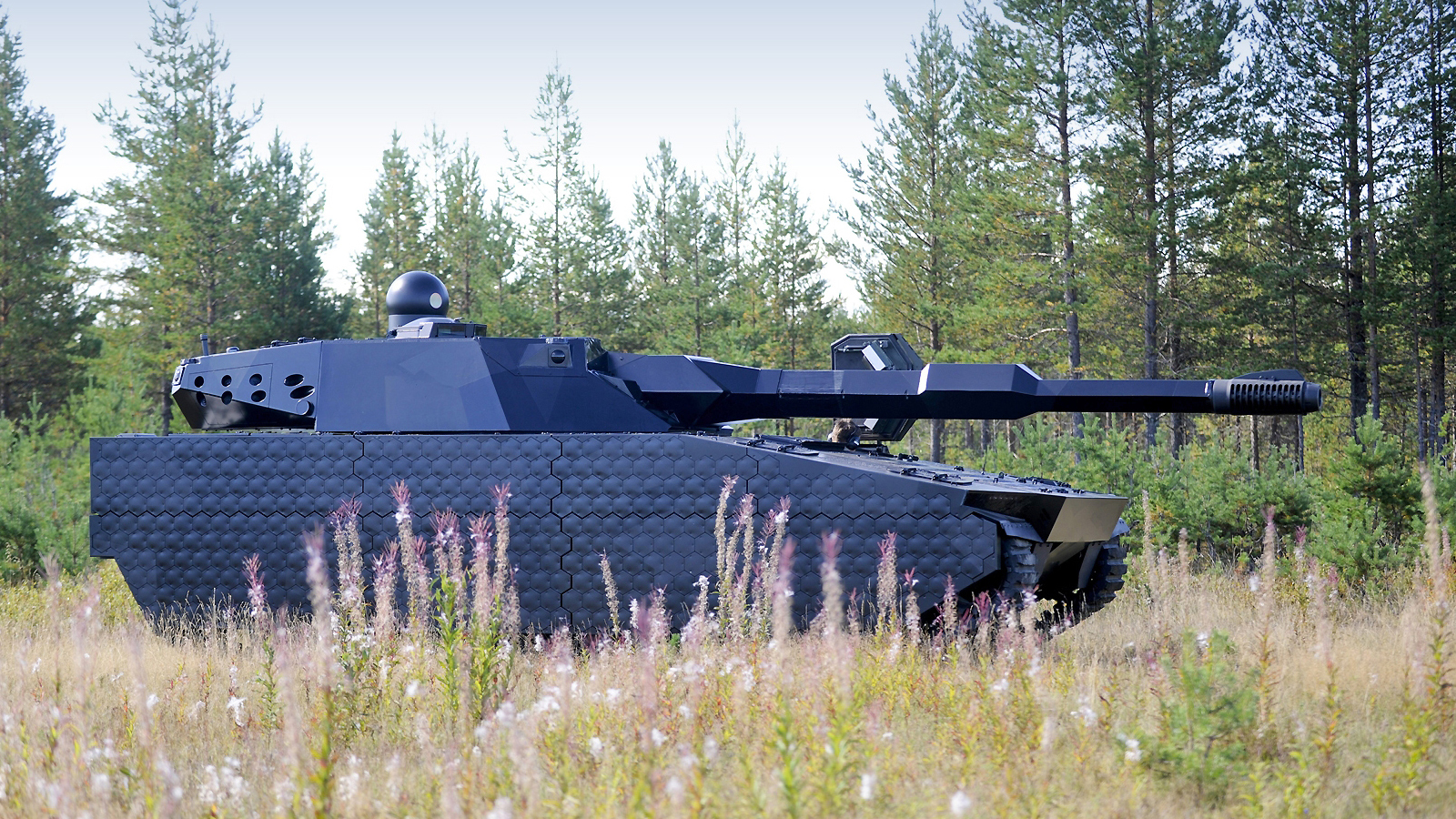 Secondly, despite the launch of America’s MPF program and China’s ZTQ-15, the time of such FSVs may slowly be coming to an end as the military paradigm once again shifts from counter-terrorism operations to full-fledged war, for which such systems aren’t well-suited, unless you’re planning to do a lot of island hopping or to fight in the mountains. As such, the nations that previously considered the era of the Main Battle Tank over are scrambling to develop its next generation, a clear indication of the fact that the combination of fifty tons of steel and a massive gun will always find a use on the battlefield. 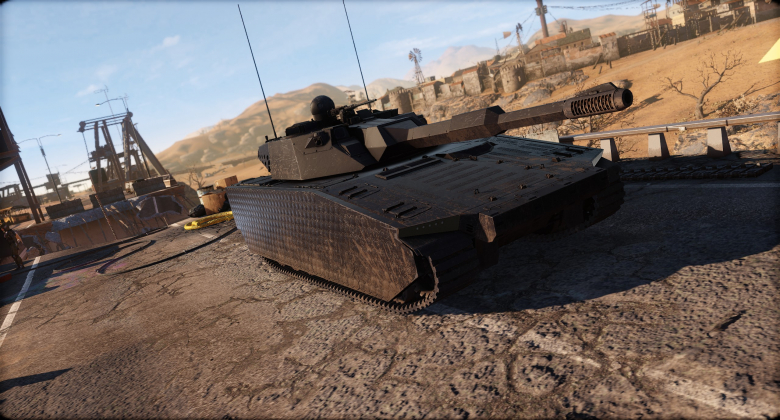 In Armored Warfare, the CV90120 Ghost will be a Tier 9 Premium Light Tank. But before we tell you more about it, please note:

We’re looking at a decent, agile Light Tank with a lot of firepower and excellent camouflage thanks to its ADAPTIV system, which you are already familiar with from the PL-01. But this vehicle will be more than just a PL-01 of Tier 9, much more. 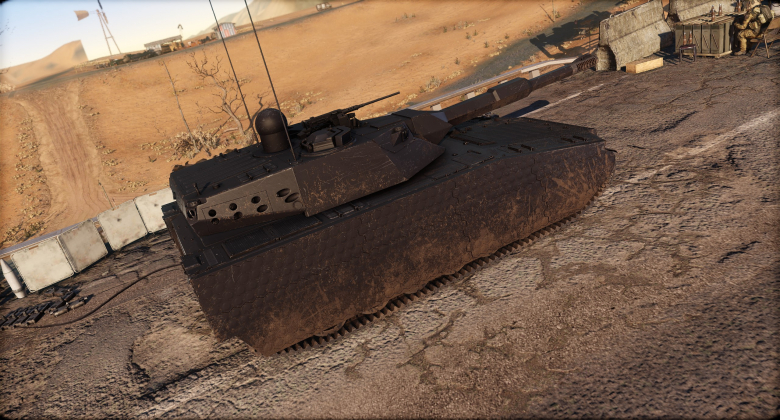 Let’s start, as usual, with the protection. As you might expect, this won’t be the strongest aspect of this vehicle with the basic hull being able to withstand autocannons only. It’s not all bad though, as the vehicle will have the AMAP-ADS hard-kill APS available as an additional progression module (unlocked by completing Battle Path missions and challenges).

The mobility, on the other hand, will be excellent since we’ve upgraded the Scania DS16 engine to 1200hp, which translates into the acceleration from 0 to 32 km/h in 3.3 seconds and the maximum speed of 70 km/h.

But the fun only really starts with this vehicle’s firepower. In its stock configuration, it’s definitely not anything to scoff at – we’re looking at 120mm smoothbore cannon with 800mm of penetration and the damage per minute value of 7200 units (5 seconds of reload time, 600 points of damage per shot). 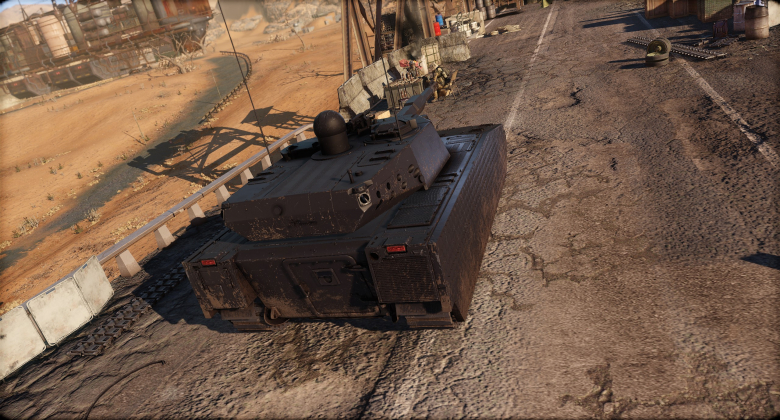 However, you’ll have the option to customize your performance by choosing one of two additional protection modules. Either you can choose to unlock a new shell type with increased penetration (850mm) or you can unlock an entirely new gun. The alternative L/47 LLR cannon has slightly lower penetration (780mm) but comes with a 6-round Ready Rack, allowing you to fire one shell per 2.8 seconds when loaded. And that’s not all – even when empty, the reload time will be exceptionally short (5.6 seconds).

In other words, you can choose between extra penetration and burst damage. It’s worth noting that the Ready Rack option damage per minute value stays roughly the same (7158).

The camouflage will, of course, be excellent, as befits this stealthy vehicle. The baseline camouflage factor value of 27 percent will be complemented by solid viewrange (430m) and the ADAPTIV camouflage system, which provides you with an environmental camouflage bonus when stationary. 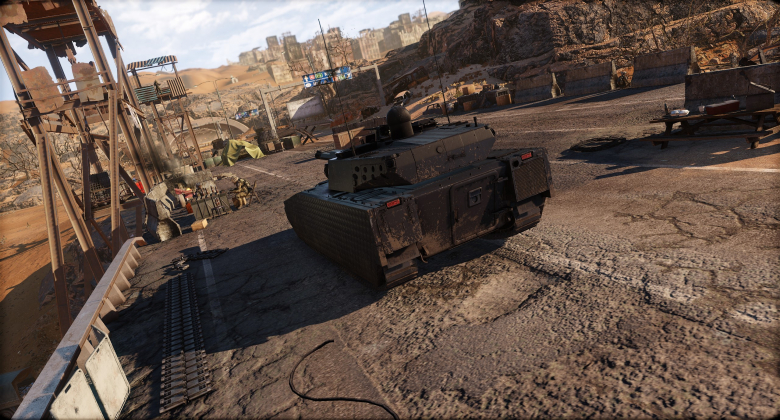 And, last but not least, your active ability options will include Retreat, Zero In and Rapid Fire.

In summation, we’re looking at a vehicle that can be played two ways. First, as a fast hit-and-run Light Tank using the combination of a Ready Rack and its excellent mobility, or as a stealthy sniper using the ADAPTIV system and the upgraded ammunition. While you won’t be as stealthy as dedicated Tank Destroyers or small AFVs, you’ll still be able to do a lot of damage from behind the safety of your lines.