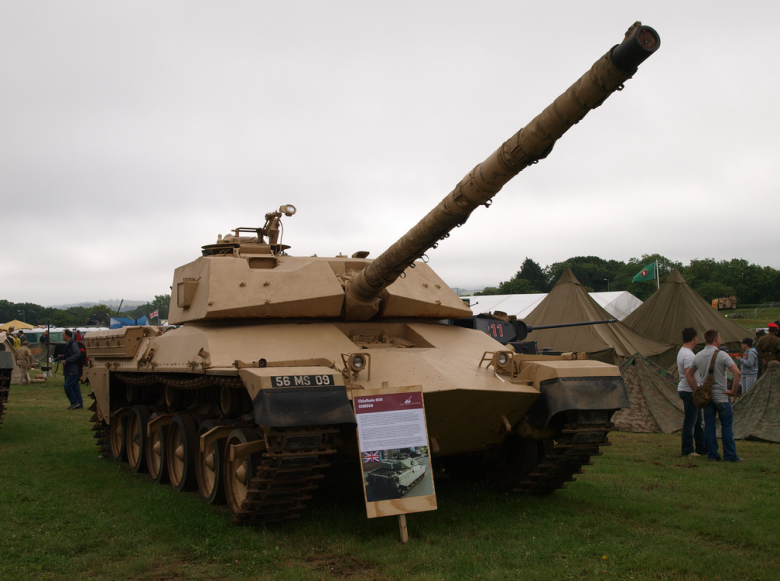 The Chieftain 800 was a heavily modified prototype variant of the classic Chieftain from 1980, built by Vickers on a chassis of an ex-Iranian order Mk.5 Chieftain. The purpose of this configuration was to attract foreign buyers – it was purely an export venture, based on two sources:

The main difference between the mass-produced Chieftains and the Chieftain 800 was the presence of British Chobham armor. Chobham armor is a composite armor named after the place where it was developed. It is used on several western Main Battle Tanks, including, for example, the Abrams. It represented a massive upgrade over the older Stillbrew kit of the then decade and a half old Chieftain, but it's worth noting that the frontal hull armor was modified to the 'pike nose' configuration, a solution that was mostly considered obsolete at the time.

All this additional armor increased the weight of the vehicle, which grew to 56 tons. In order to cope with the additional stress, the engine was upgraded to an 800hp version of the Perkins Condor CV12 V12 diesel engine, paired with a modified (fully automatic) David Brown Defence Equipment TN12-1000 transmission. The vehicle also received an auxiliary 30hp engine and an electric generator that provided the power for the electronics when the main engine was turned off.

One feature that did not make it to the Chieftain 800 prototype was the new hydrostrut suspension replacing the old Horstman. It was tested on another vehicle and was originally to appear on the Chieftain 800, but was not installed in the end. A year later, in 1981, an upgraded version with a 900hp diesel engine (also by Condor) called Chieftain 900 was proposed.

The 1980 Chieftain 800 prototype was modified to resemble the Chieftain 900 configuration (with ballast instead of extra armor to simulate the weight), while a second Chieftain was modified to the full Chieftain 900 standard (also without actual Chobham armor). One of them was also fitted with a Centaur Fire Control System for demonstration purposes.

Both vehicles were then shown to the public during the 1982 BAEE expo and were offered until 1986, when the project ended without finding a buyer.

One of the two prototypes is currently owned by the Bovington Tank Museum, the other ended up as a practice target on the firing ranges of the Royal Armoured Corps Gunnery School in Lulworth.

In Armored Warfare, the Chieftain 800 will fill the gap between the Chieftain Mk.5 and the Challenger 1, offering more protection over its predecessor.

On the 20th of April, both Open Beta servers will not be available for an extended period of time in order to implement Update 0.19!