You’ve been waiting for a new Contract vehicle to replace the Arjun for a while now and we are finally ready to unveil it – it is the Centurion AVRE Main Battle Tank!

It’s highly likely you’re familiar with the Centurion already – either from the history books or from our game where we have the Israeli variant present as a progression vehicle. But to sum its history up – the Centurion has its roots in the end of the Second World War and the search for a multi-purpose tank. Today we’d call the concept “Main Battle Tank” but back then the British called it “Universal Tank”. It was a classic early Cold War design with steel-only armor and a rifled gun, on par with the American M48/M60 series and the Soviet T-54/55. It started with the QF 20-pounder gun and later got the famous 105mm Royal Ordnance L7.

The British used it successfully in Korea, during the Suez Crisis and on the Rhine but the fame came from its Israeli service during the 1967 Six Day War and the 1973 Yom Kippur War (ironically, both sides used the Centurion with the other operator being Jordan) before being phased out and partially converted to heavy APCs. One of the most famous tank commanders ever born, Zvika Greengold, commanded a Centurion.

But it wasn’t just Israel – the Centurion was used by more than a dozen other countries and saw numerous conflicts, including the Vietnam War and the Indo-Pakistani wars. The major users were also:

And many others, twenty in total. The British began phasing the Centurion out of the MBT role in 1966 and finished the job in 1977, replacing it with the Chieftain MBT completely.

But that wasn’t the end of the story for the British Centurion because other, specialized variants existed as well and those would stay in service for decades longer. One of these variants was the AVRE. 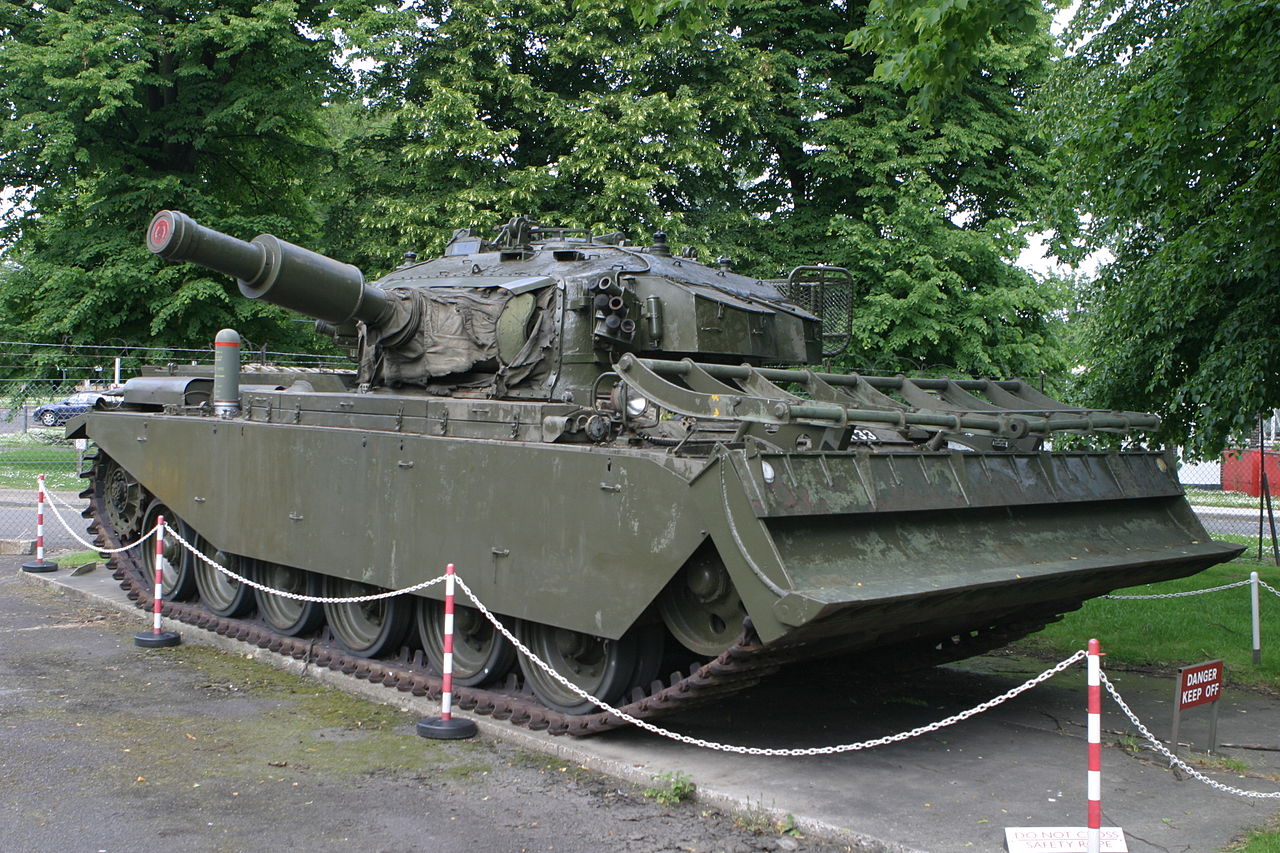 AVRE stands for Armoured Vehicle Royal Engineers, which implies what it was used for. It was a standard Mk.5 Centurion with its gun replaced by the L9 (later L9A1) 6.5inch (165mm) short-barrel demolition gun firing massive HESH demolition charges to devastate field fortifications and other obstacles. The charge weighed roughly 30kg, half of which was the PE4 explosive. For comparison, this roughly amounted to 6 120mm HESH rounds. The gun was fairly accurate as well, all things considered – its maximum range was roughly 1800m, at 1300m it could hit a bunker and at 730m it could hit small targets such as individual steel bars of a bridge. The gun could depress to -10 degrees and elevate to +20 degrees.

The tank weighed some 57 tons, had a crew of four and was powered by a 650hp Rolls-Royce Meteor engine. The engine was later upgraded to Rolls-Royce BL60 producing 695hp. It was a slow tank – its maximum speed was 48 km/h, but that was just theoretical. The real maximum speed was somewhere around 30 km/h on rough surfaces.

The vehicle carried a wooden fascine that would be dropped into various holes, trenches, brooks and other such obstacles in order for other armor to be able to cross them. Don’t let the mention of wood mislead you through – the fascine weighed 5 to 8 tons and could carry the weight of a tank, including the AVRE itself. Another upgrade was a hydraulic dozer blade intended to clear various obstacles and to dig emplacement on moment’s notice – in soft soil, it took only roughly 7 minutes to dig a hull-down position for another tank. The AVRE could do a lot of other things too, including towing trailers, mechanical minelayers and other engineering devices.

The design of the AVRE was approved in 1955 as a replacement for by then completely obsolete Churchill AVRE. The first prototype was built in 1957. This Centurion variant in its most basic form entered service in 1963 and stayed in it until 1992, after which it was finally phased out as well. Roughly 40 vehicles of this type were built.

The AVRE was used during Operation Motorman as a heavily armored plough – four were used on July 31, 1971 to clear the barricades erected by IRA extremists in Ulster, Northern Ireland. The guns would not be used, only the dozer blades – the use of tanks for such purposes, although a bit of an overkill, ensured that nobody would be harmed had the militia booby trapped the barricades with explosives. All the tanks that participated were withdrawn soon after.

The second and more famous use was the Gulf War – three engineering regiments (21, 23 and 32) equipped with 12 AVREs were sent to Iraq to do what they were designed to do – clear obstacles and breach enemy fortifications. Each of the regiments was attached to an armored brigade belonging to the 1st Armoured Division.

By then, the tanks were already obsolete – one of the deployed AVREs was even deployed during Operation Motorman two decades prior. The gun was also deemed unsafe to be fired from inside the tank – for it to happen the crew had to, per regulations, exit the tank and fire the gun remotely. Fortunately, the assault was so swift that armored engineers were not needed. 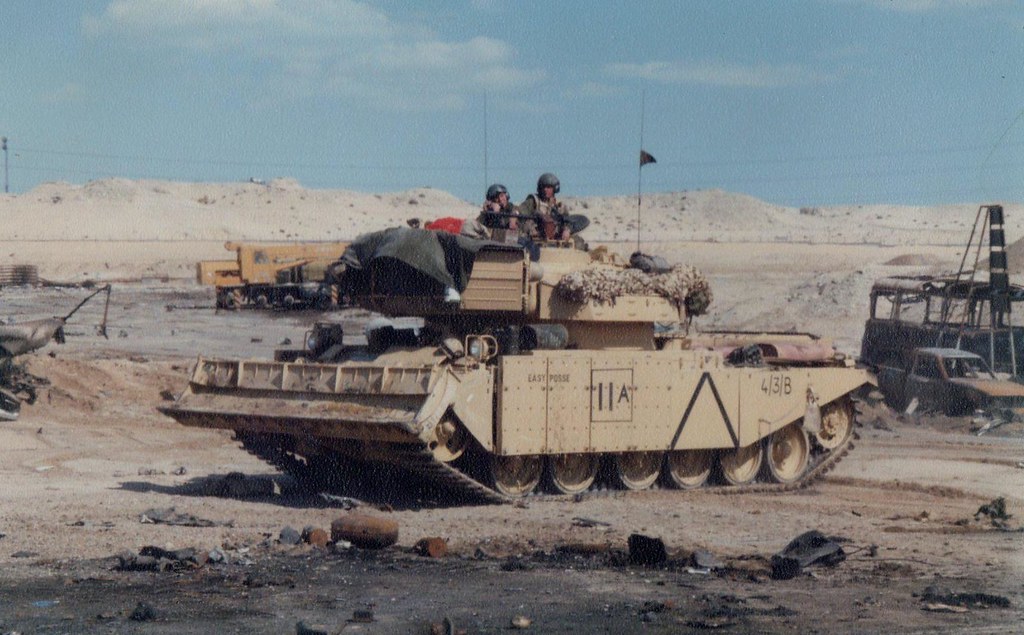 For the Gulf War, the Centurion was upgraded with a ROMOR ERA kit. This upgrade was done by the engineers themselves and it was believed that it made the tank resistant to any anti-tank weapons the enemy could deploy.

Unfortunately, the AVRE became famous for an accidental ammunition detonation likely caused by a crew member using a stove inside the tank, igniting petrol fumes and subsequently the ammunition. Additionally, the fire spread to another AVRE nearby. The resulting detonation basically leveled the area. 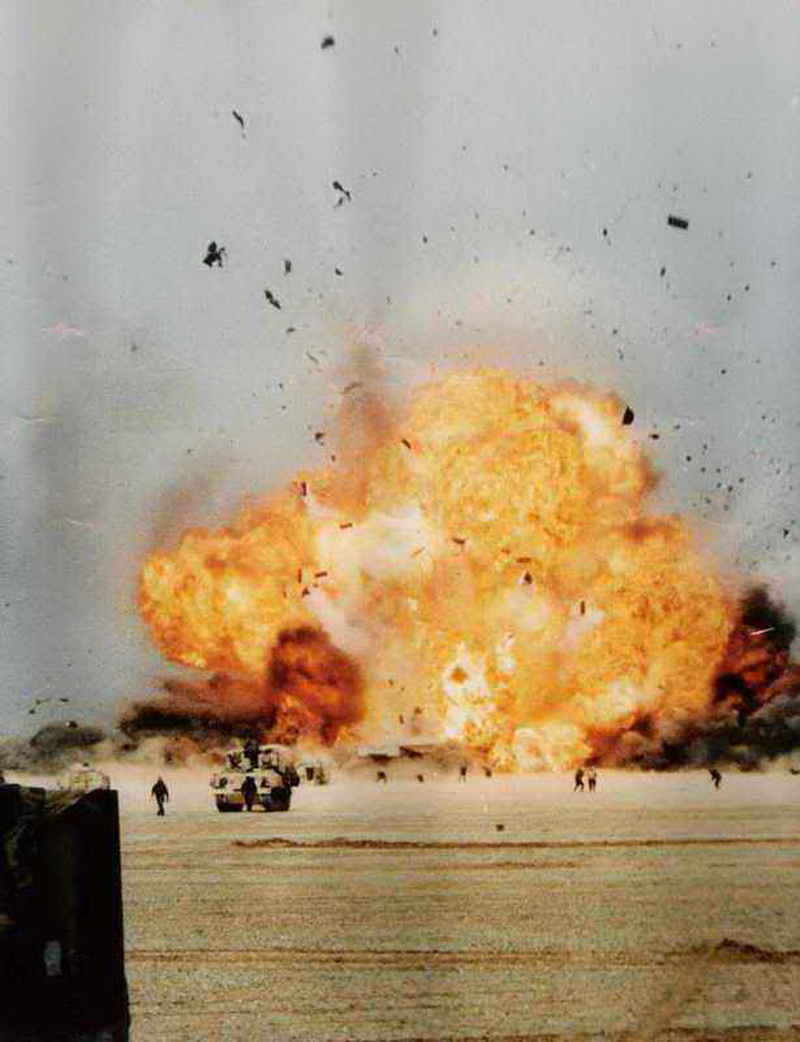 Amazingly, there were no fatalities to the incident – everyone managed to run away on time, only four men were injured (minor burns and scrapes). Embarrassingly, another Centurion AVRE exploded in a similar manner a day earlier when its mine-clearing device misfired, bringing the total loss to three tanks despite never firing a shot in anger. The only task the tanks undertook was clearing the Iraqi tank wrecks from a road in northern Iraq due to the fear of unexploded ammunition.

In Armored Warfare, the Centurion AVRE will be a Tier 8 Premium Main Battle Tank.

Yes, that’s right, Tier 8 – before we get to the game concept of this rather unique vehicle, let’s talk a bit about the Tier because it sounds a bit strange to have a vehicle from the 1960s so high, doesn’t it? 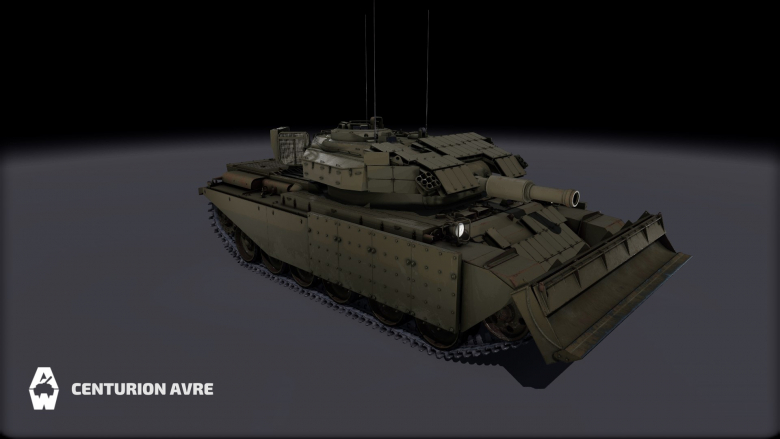 The core of this decision is – you, the players, or more specifically your feedback. We really wanted to introduce the AVRE into the game because it’s such an interesting vehicle. We also wanted you to have it not as a part of a Battle Path, but in an event or a Contract, which meant we’d be looking at the Tier 6 to Tier 8 bracket. Tier 6 was a relatively fine choice but we traditionally offer at least Tier 7 vehicles as a part of the Contract Mission system. The thing was, Tier 7 is not exactly popular these days based on your feedback. It’s either Tier 6 or Tier 8 that matter. Additionally:

All these factors led to the decision to introduce it for Tier 8. We hope you’ll forgive us if we make it properly awesome to play. We fully intend to make it fun.

Speaking of fun – let’s dive right into the core idea, which is to give you basically a slow, heavily armored mobile bunker with a massive gun lobbing 165mm HESH shells at the enemy. The armor itself should be able to withstand the fire from other Tier 8 guns and should be roughly as thick as that of the Al Hussein MBT. The ERA kit is the same too – the ROMOR armor is also used by Al Hussein. Note that just like in real life, the hull side panels are not ERA – they are composite armor elements. The dozer blade will also act as additional armor – just don’t expect much ramming damage here – the AVRE is way too slow for that.

And the gun – well, 165mm HESH is no joke. It’ll fire slowly but deal tremendous damage upon hit. The exact amounts are still being tuned, as is its penetration. What is sure, however, is that:

The downside will, of course, be the mobility – the AVRE will be very slow (34 km/h maximum speed) and sluggish. The turret will traverse fast enough for you to engage anyone circling around you but you definitely won’t be able to out-maneuver anyone, that’s for certain. And as for camouflage and view-range, well... it’s a massive steel box that levels a building with a single shot but has the optics from the 1960s. You get the meaning. As for its active abilities, we’re planning to offer two – Defense and Rapid Fire. 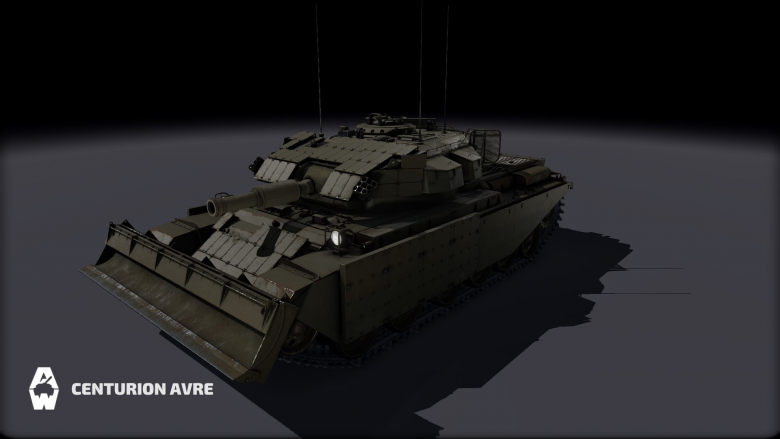 And that’s about it. Unlike the rather simple Osório for example, the AVRE will require some skill to play and will not be suitable for completely new players. The veterans, however, should have a lot of fun with it on the battlefield. We hope you will enjoy it and, as always: