The third reward vehicle of four for the next Battle Path campaign is the Polish BWP-2000 AFV. Much like the Rosomak and the Puma – both are available in Armored Warfare – the BWP-2000 started as an attempt to replace the aging BWP-1 (Polish version of the BMP-1 IFV). Unlike the abovementioned vehicles, however, the BWP-2000 was an indigenous tracked chassis combined with commercially available off-the-shelf western components. 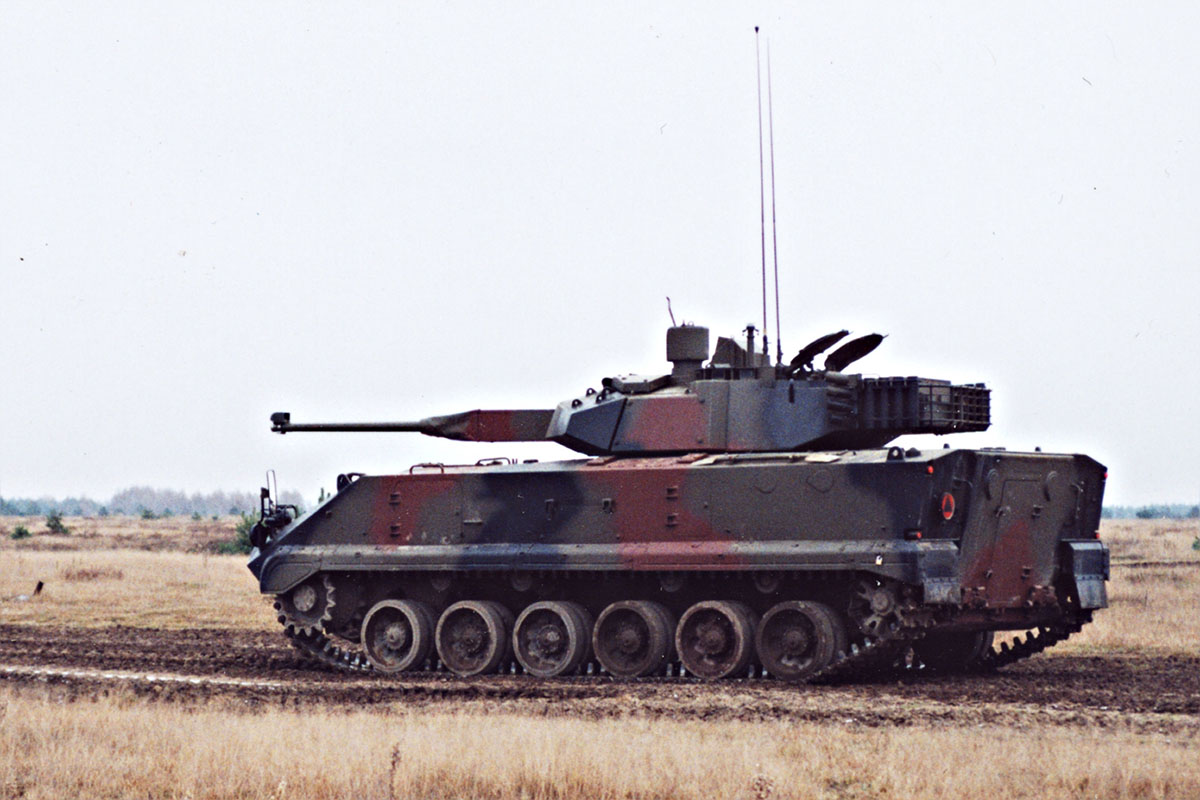 Its roots go back to the 1980s and the development of the MT-S medium artillery tractor that could work as an APC. The MT-S was developed by the Soviets (Uraltransmash) in the 1970s based on the same chassis the Akatsiya SPG was using. The idea was to provide first-line troops with something in the medium weight category akin to an APC that could also fulfill a variety of roles, replacing the older ATS-59. The thing was, the Soviets themselves didn’t have the capacity to produce it and wanted the Polish to do so in their stead.

Initially, the licensing talks went well. The production was to take place in a plant called Chrzanów in southern Poland and the Soviet documents were being adapted to the Polish industry standards by a military institute in Gliwice. Ultimately, however, the talks broke down on a misunderstanding in the joint Soviet-Polish design bureau that was responsible for adapting the design and in the end only 18 MT-S vehicles were ever produced. Interestingly enough, the MT-S was officially accepted in Soviet service in 1981 despite this setback, so at least some of them ended up in the Soviet Union. One or two are left in Polish museums.

This left the Soviets allegedly quite annoyed and the Polish scratching their heads as to what to do with a half-adapted design they were somewhat ready to build. They contacted East Germany and, together, decided to overhaul it significantly into what became known as SPG Kalina. The SPG does not stand for the usual “self-propelled gun”, but for “specjalne podwozie gąsiennicowe” – special tracked chassis. It was to serve as a universal platform for a wide scale of different purposes such as mobile radars and minelayers. The platform itself didn’t really take off and ended up being used (in a heavily modified form) on the Krab self-propelled gun later on with most of the other vehicles planned to use it staying in prototype phase only.

One of these vehicles was an anti-tank minelayer named SUM Kalina. In this case, the Polish provided the base vehicle while the Germans provided the mine-laying device for it. A prototype was built and tested in 1989, but with the political changes shaking the entire Eastern Europe, the project never really took off and remained in prototype stage only. The massive armies of the Warsaw Pact were reduced, funding was cut and the companies that were previously supplying the armored vehicles were forced to look for new markets, which generally meant massive layoffs as well as the attempts to save whatever money they could. 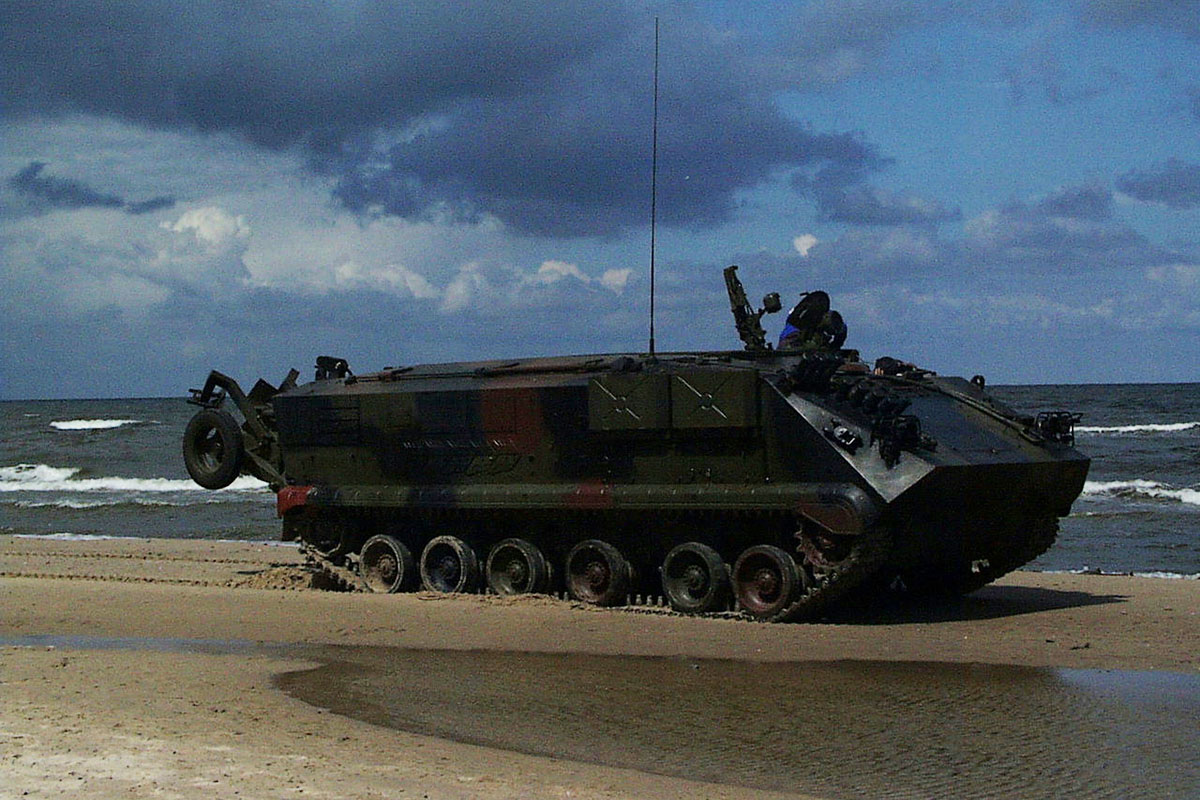 On the other hand, at the same time, many post-Soviet armies of the eastern bloc were looking at replacing their own aging Soviet-era equipment that was getting quite obsolete – in our case, the BMP-1 IFV. Its cramped design left no room for improvements (especially when it came to its insufficient protection levels) and it was clear it would have to be replaced sooner rather than later – in reality, of course, Poland would wait two decades for its Rosomak and didn’t really get to replace the tracked BMPs with something more suitable until today, but that’s another story. Back then, in the early 1990s, the idea was clear – we are short of funding but need a new IFV. Let’s therefore build something with what we have, the Polish thought.

What they had was, amongst other things, a prototype of SUM Kalina – the vehicle was in its essence a rather roomy steel box on tracks. So why not overhaul it, put a turret on top (ideally an off-the-shelf one, something western with a big gun) and voila – a perfect IFV. Or, maybe not perfect but at least an acceptable one. That might work. Maybe.

And that’s pretty much what they did – obviously, the above is a gross oversimplification of the matter (the hull was overhauled a lot) but that’s the gist of it. Even though the first concept appeared as early as in 1995 at the MSPO expo in Kielce, the result was called BWP-2000 since it was intended to replace the BWP-1 in the 21st century.

As IFVs go, the BWP-2000 was a rather big one – it could carry 8 fully armed troops along with three crewmembers (two of them in a turret). The weight data vary from source to source but in its most basic form, the combat-ready vehicle likely weighed between 29 and 32 tons. 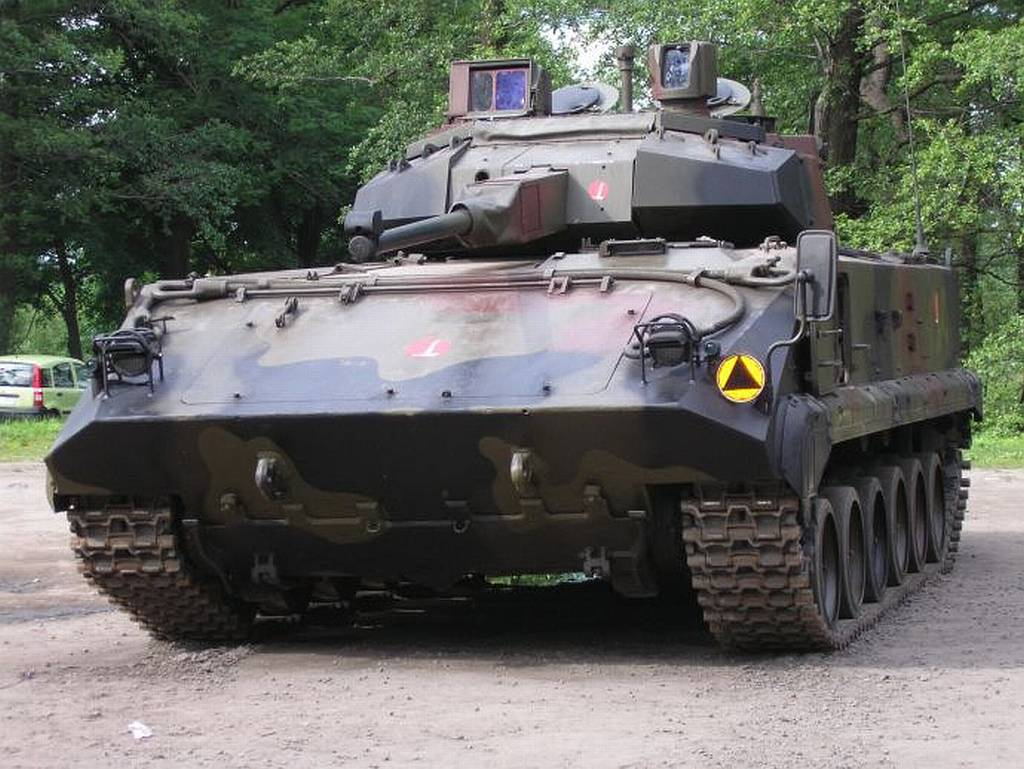 The BWP-2000 had a welded steel hull and offered sufficient (based on its intended combat use, anyway) protection levels – the front was supposed to withstand 35mm autocannon fire at 1000 meters, the sides protected basically against small arms only. Additionally, the vehicle had its engine in the front, which meant that its powerplant was positioned between any threats and its crew, providing an extra layer of protection (much like in the Merkava MBT). How effective it really was, however, will likely remain unanswered.

Speaking of the engine – the vehicle was powered by another older one, the V-46-6 V-12 38.88 liter diesel producing 780hp. With it, it could go as fast as 70 km/h (although the realistic off-road speed was more along the lines of 30-35 km/h). Why this engine? The Polish had a lot of experience with it from their T-72M1 tanks and it was readily available. It wasn’t the only thing the BWP-2000 inherited from the T-72 though.

For one, the lower frontal plate was protected by a T-72 style dozer blade, but, more importantly, the roadhweels and tracks were adapted from a T-72 as well (the suspension did not stay from the SUM Kalina).

And then there was the turret. Thanks to their cooperation with OTO Melara, the designers were able to fit the vehicle with an available turret called T-60/70A. Developed as an export product, this welded steel, manned turret was not all that special when it came to protection (which, with extra armor, was roughly similar to the hull), but what made it really interesting was its armament. Its main weapon was a rather large, 60mm L/70 automatically loaded cannon called OTO 60/70. The gun was fully stabilized and could fire two types of rounds:

The gun was fed by two drum-like magazines, each with 8 rounds (the vehicle carried 32 rounds in total in the turret). The maximum rate of fire was 30 rounds per minute. The gun could elevate to +40 degrees and depress to -6 degrees and the whole firing process was controlled by a digital FCS adapted from the Ariete and Centauro vehicles, which included a laser rangefinder as well as thermal optics. While this system was quite advanced, it could have been made even better by using additional optional equipment based on customer’s wishes. This included next generation thermal imager.

The turret was also protected by two banks of 80mm smoke grenade launchers that could be connected to a laser warning system (SSC-1 Obra) to provide a simple soft-kill APS. And last but definitely not least, the turret could be fitted with two TOW anti-tank guided missile launchers. All in all, the vehicle packed a serious punch.

The first prototype caught a lot of attention but there was a problem. It wasn’t really production ready or tested – and getting it ready was a lengthy process. The issue was, the IFV was built for a 1980s style war on the plains of Eastern Europe with hordes of enemy tanks being the biggest threat it could face. That’s why it carried several means to destroy enemy armor while the protection levels, while adequate to the role it was envisaged for, were lacking compared to modern standards.

The Polish built two working prototypes starting from 1997 (some sources claim 1995), one with the abovementioned turret, another with a Polish-made turret (developed as a private venture) with its properties comparable to the Italian one. Other armament options (ranging from 23mm to 40mm autocannon or even a 105mm gun) were also considered. 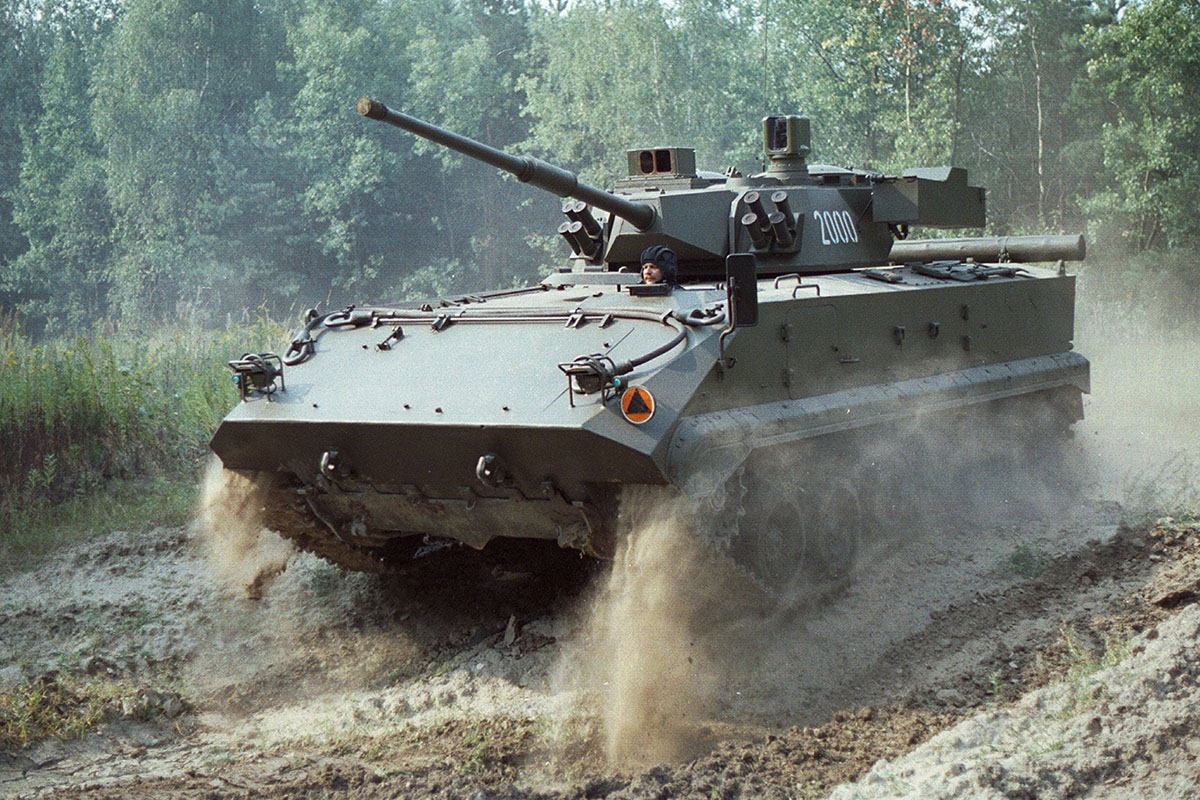 BWP-2000 with the domestic turret

The development dragged on, as did the Polish deliberations regarding what to replace the BWP-1 with until, in 2001, the September 11 attacks happened, followed by the War on Terror. This seriously shifted the mission of the NATO militaries from fending off large-scale Soviet invasions to asymmetric warfare. Urban combat required new approach, one that the Soviet era IFVs were just not suited for, resulting, in some cases, in extreme IFV losses in such operations.

Consequently, Poland decided to put the tracked IFV program on ice and focus on the wheeled AFV replacement part, which eventually led to the KTO Rosomak. As for the tracked AFVs – even today, more than two decades since the introduction of the BWP-2000 – the Polish tracked IFV situation is not yet resolved and the BWP-1 is still in service. Under these circumstances, it is unlikely the BWP-2000 will ever be mass-produced.

In Armored Warfare, the BWP-2000 will be a Tier 8 Premium Armored Fighting Vehicle. Much like its real life counterpart, it will be a quite a large and powerfully armed AFV with its steel armor protecting it basically only against enemy autocannons. Its survivability will be enhanced by its considerable hitpoint pool (thanks to its size) and its ability to spot its enemies at longer distances if it stays static (up to 450 meter viewrange).

On the downside, the camouflage factor will not be great due to its large size (roughly comparable to the Bradley), although it will have access to the Silent Running active ability that enhances your camouflage factor for a short period of time at the expense of mobility. Combined with the static viewrange increase, the vehicle will be able to do some effective passive scouting despite its size. 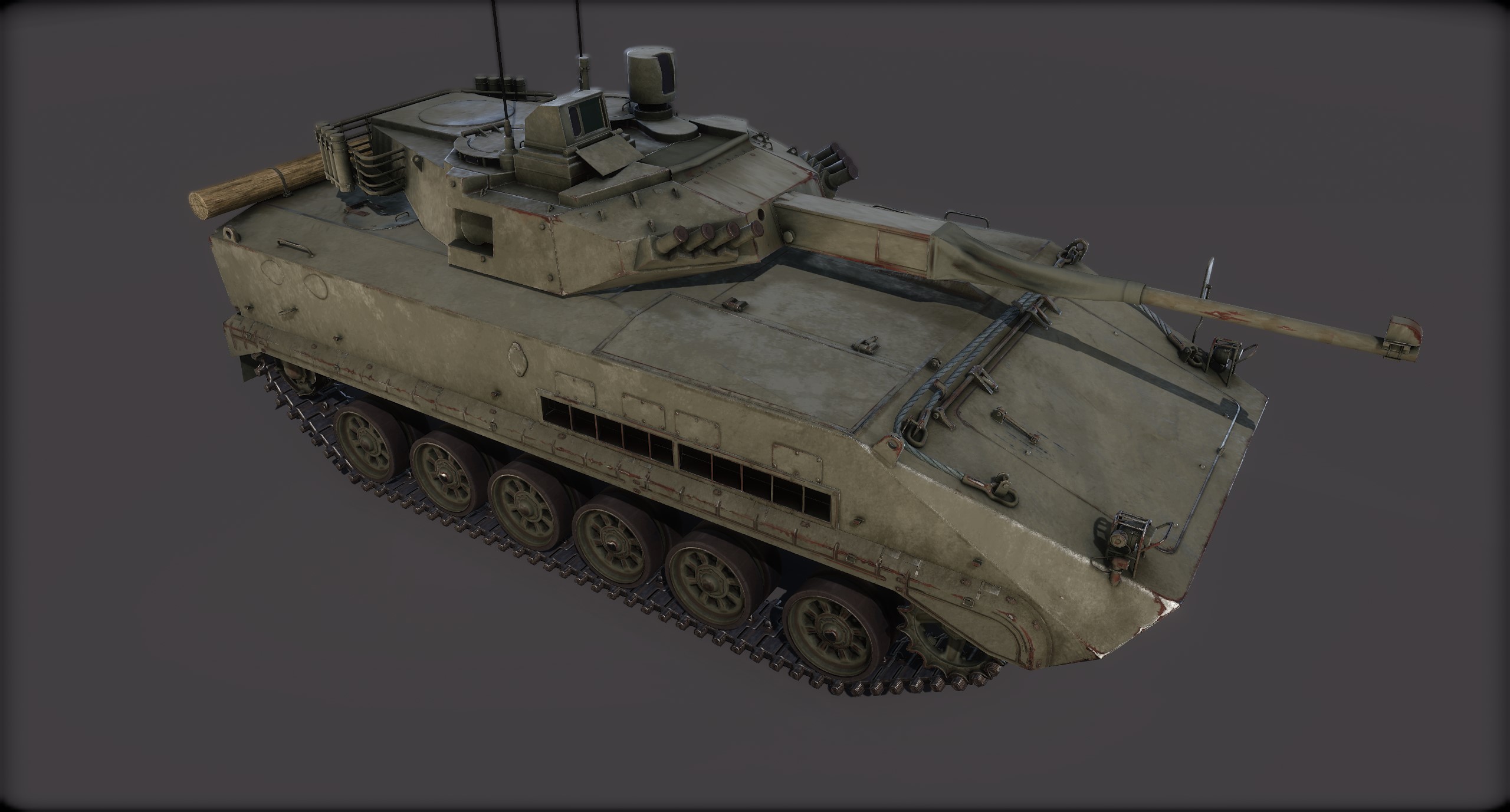 The mobility will be on par with other heavier AFVs thanks to its 780hp engine – in fact, the maximum speed will be quite high, 70 km/h. Where it will truly shine, however, will be its firepower.

The basic gun will be 60mm autocannon with a 16 round clip and the rate of fire of 60 rounds per minute. With the penetration of 350mm and the damage value of 220 per shot, the gun will be able to put quite a few holes in many targets before having to reload the clip for 10 seconds.

But that’s not all. The BWP-2000 will also feature two ATGM launchers – you’ll have the option to choose between two systems:

In other words, the choice between more powerful missiles with longer reload or less powerful ones with a shorter one will be yours.

Please note that the abovementioned characteristics may (and likely will) change based on vehicle testing.

We hope that you will enjoy this third prize of the four exclusive vehicles for the next Battle Path. In the next In Development issue, we’ll take a look at the final prize as well as on how we enhanced the upcoming Battle Path based on your feedback.

Developer Update: Moscow Calling, Age of Rage, Leclerc and Beyond

Learn more about our plans for the summer of 2019