Welcome to another part of the Q&A series where players ask about the future of Armored Warfare and developers answer! 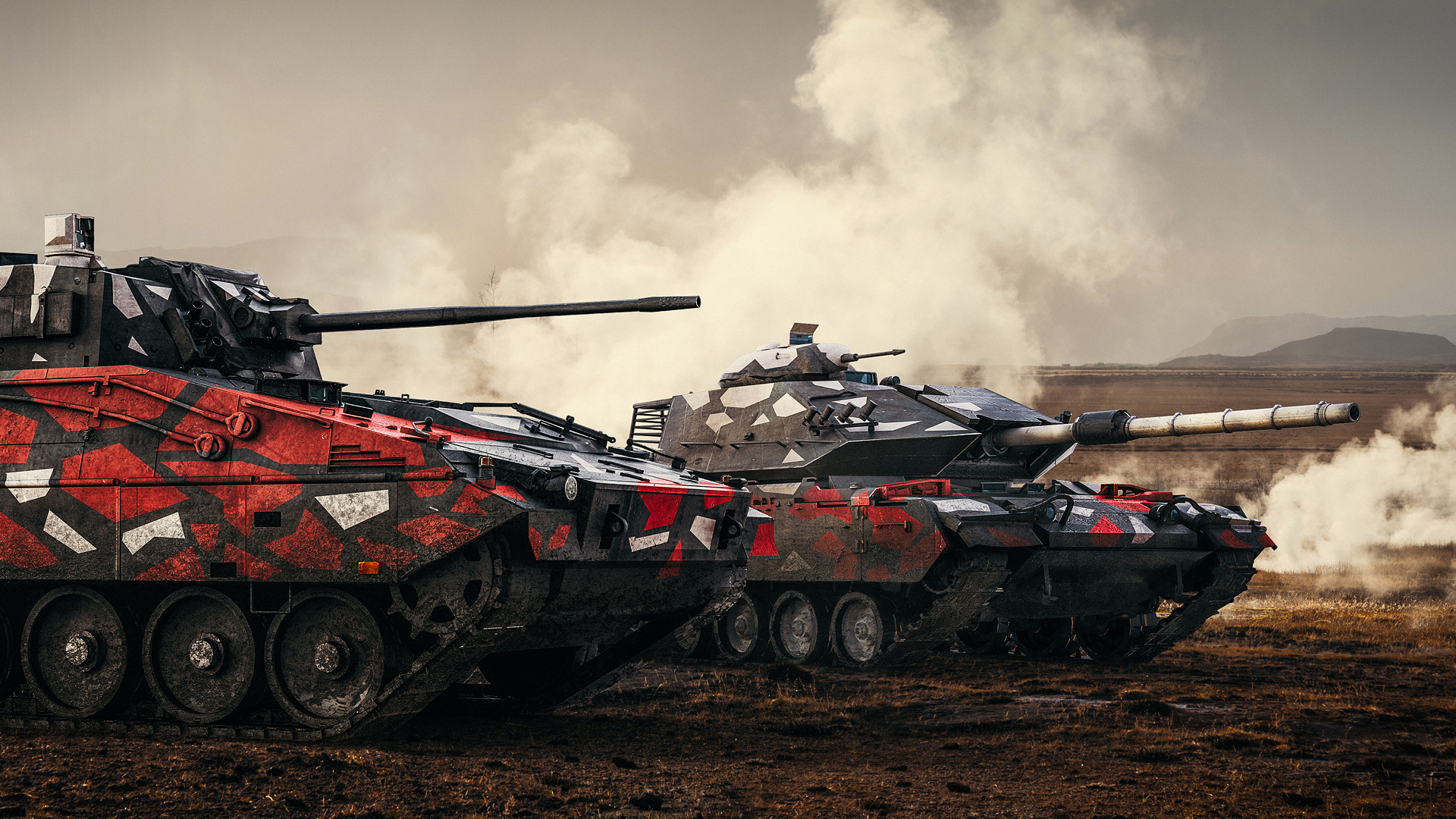 The game's balance has changed a lot since Balance 2.0. Why not bring back the fourth Retrofit slot for all Tiers?

We are currently investigating this question, but the most likely outcome is that not all vehicles will have a fourth Retrofit slot.

Can the AGDS and DRACO get active radar ability, similar to the AMX-13 DCA, seeing how they both have modeled radar dishes and the AGDS one is even animated?

This feature (deploying radar ability) is planned for the Abrams AGDS and will appear in one of the future updates. It is, however, not planned for the DRACO as its radar is fixed to the top of the turret and cannot be lowered without actually unscrewing it from the vehicle.

Are the developers aware that the T-15 missiles are broken? They lose guidance every second shot, causing missiles to either launch straight up in the air, or slam into the ground. Additionally, this is not a case of soft-kill APS effect or smoke.

We are currently investigating the T-15 missile situation further. A portion of the issue is connected to the fact that the missiles are fired from fixed launcher, as was explained in our previous articlebut there seem to be additional problems connected to this particular vehicle and its ATGMs. We welcome any and all evidence of these issues, especially videos and replays.

We can feel that the PvP mode is starting to suffer from low population again with the queue time going up. Are there any plans to remedy the situation?

We are aware of the queue situation in the PvP mode, especially outside of the peak population hours. We are currently discussing the matter internally as well as working on several solutions, including the ability to enable mode-specific bonuses for a limited time. There are other ideas as well, such as re-introducing skirmishes (small-scale battles) or making the mode periodic (available once per several minutes) outside of EU hours, but each of these solutions has serious drawbacks and requires careful consideration. Let us know what you think on Discord!

Despite the buffs implemented in Update 0.28, the Abrams vehicle series still performs terribly. Are there any further improvements planned?

Yes. We are currently discussing their nature.

The AMX-30 tanks and the AMX-40 have "high reverse speed" listed in their traits, yet their real reverse speed in the game is only around 12 km/h. Is that a bug?

Yes, most likely. We'll take a look at that.

Which new progression vehicle branch will follow after the French one is fully introduced?

We are not ready yet to reveal that as the next progression branch is still months away. But we can promise you it will be both unexpected and very interesting.

Are there any plans to address the issue of deadly and laser-accurate ATGMs in PvE, for example by buffing player soft-kill APS in that mode only?

We are aware of this issue and are planning to take measures to address it. However, this matter is more complicated than it seems at a first glance and requires thorough testing, which is why we cannot unfortunately give you an estimate as to when will these measures be implemented.

What about artillery in Global Operations? You mentioned it could be allowed for this mode – will it?

Not in the near future. Further down the road – we'll see.

Let's talk about the MBT class. Don't you think that, as perhaps the most important class in the game, it should have more advantages? Yet it seems its performance is being reduced more and more – for example, since the last update, ATGM "double taps" instantly deal 3.500 points of damage without any defense being possible.

However, with that being said, it's also very true that many MBTs are sub-par vehicles and, at the same time, a number of ATGM carriers are performing above average. Both of these factors combine into the situation where some MBTs get destroyed too quickly. To address this, we are planning to continue balancing the ATGMs as a whole and to give a number of MBTs active abilities in order to make them more viable and diverse. The upcoming French top-Tier tanks will be a good example of this approach.

The game feels quite unrealistic compared to its competition when it comes to vehicle physics. Are there any improvements to it in plans?

At this moment, we are working, first and foremost, on improving the visual side of vehicles and shooting. A good example of that is the introduction of new tracers and shell impact effects in Update 0.28. The next on the list are new smoke effects, new flame effects and much more. After that is done, we are planning to take look at the game's physics, starting with the wheeled vehicles and their control. Even though their situation has improved over the course of several last patches, there is still work to be done.

Recently, I and my friends lost a lot of winrate percentage in PvE. Is that a global thing? If so, is it intended that the mode is now that difficult?

You might recall that, in not so distant past, we overhauled the difficulty levels of the mode and the general winrate statistics indeed dropped as a result. The whole idea behind the overhaul was to allow players to take on more difficult challenges if the "standard" PvE was too easy for them. Before the overhaul, all three standard difficulty levels were rather easy and there was no real challenge with the exception of Special Operations. After the changes had been implemented, the lower, "Challenging" difficulty remained roughly on par with the previous PvE experience while the "Hardcore" difficulty setting became considerably harder. So, yes, if you play exclusively on "Hardcore", your winrate will likely drop compared to the "Hardcore" results before the changes took place.

The Chain of Command principle (being unable to level up all Commanders to level 15) is one of the unpopular things in the game. In the past, you promised us a way to "defeat" it. How's that going?

We do currently have a solution in mind, where this option will only be available to dedicated players. Simply put, players who level up two commanders to the maximum, fifteenth rank the "normal" way will obtain the ability to level up all the others to level 15. We are still working on the details but we should be able to get back to you with more information soon in a dedicated article.

What happened to the Self-Propelled Mortars? Is this class coming to Armored Warfare?

We are still considering their introduction but they will likely not come in the near future.

I understand that the developers want to boost the less popular modes in the game by making them a condition for various contracts and missions (including the Battle Path ones) but, as a PvE player, I do not want to play PvP. Is it possible to do something about this?

Yes, it is. Future missions and contracts will become less dependent on specific modes.

Are there any plans to return the old special support shells to artillery or for it to get new ones?

We want to do both – to return the old support shells and to introduce new ones.

In one of the most recent updates, you converted the Marder 2 with "Smash" camouflage into a skin. When are you planning to do the same things with the other vehicles that have "fixed" camouflage? If that happens, what will happen in cases where there are multiple identical vehicles with different camouflages (for example, progression T-80U, T-80U Spacewalker and T-80U Shark) and their Premium status?

We'll deal with these vehicles when we have the time to do so. The most likely solution is that all the vehicles will stay as they are, including their Premium status with the "skin-less" variant receiving the access to all the owned skins for it.

A follow-up question then. After the conversion to the skin system is completed, will the owners of vehicles with skins (such as the Object 640 Black Eagle, AMX-10 RCR, MBT-70) therefore automatically have the access to their skin-less variants (the ability to remove the skin)?

To be clear – we consider the current state of the system as completed with the exception of specific cases where a decision is always taken ad hoc while taking our resources into account. We are not planning to change the system – only to add more skins to it. Nothing changes for the owners of "re-skins", created from progression vehicles by adding a permanent camouflage. They will still have their Premium vehicles with permanent camouflage while being able to apply that skin to their progression counterparts.

That's all for today. Do you have any more questions? Feel free to ask them on Discord and our Community Managers will collect them for the next round.