We've been looking at ways to improve our spotting system to be clearer, match expectations, and provide more feedback.

In the 0.5 patch, we added in the following things:

We reworked our formulas that we used to calculate the penalties to camouflage and made them additive instead of multiplicative. This change improved the system in several ways.

Previously we were taking only the most severe penalty from either moving or shooting and using that to modify a player's camouflage. This made it so that the maximum possible penalty from camouflage would be when you are shooting and it didn't matter if you were moving or not. Changing our formulas to be additive gave more range to the possibly camouflage penalties: being stationary has no penalty, moving is a slight penalty, shooting is a larger penalty, moving and shooting is an even larger penalty.

In effect, this allows players to spot a vehicle outside of the view range (the white circle in the minimap) if a vehicle had negative camouflage. We also added in an additional minimap indicator to display the maximum spotting range for all vehicles (this is the orange circle in the minimap). When spotting enemies, you will never be able to spot anyone outside that circle. Conversely, if you are spotted you know an enemy is within your orange circle. This maximum spotting range was already functioning, but the orange circle was added to provide feedback as well as make things not feel strange when you are spotting enemies outside of your vision range (white circle).

With these changes, we also changed the AFV bonus. First off we added the capture bonus and vision bonus to all AFVs. This allowed all AFVs to better fill the core role for the class. These bonuses were applied to all AFVs, but at different values based on the technology package they have on them. AFVs that had the troop transport technology still capture faster, but also have a smaller stationary vision bonus. The AFVs with the recon package have a large stationary vision bonus, and a smaller capture bonus. The final change we did with this was to change vision bonus to be a set value instead of a percentage increase. The previous percentage based increase had the effect of making AFVs with good sight range better, but the AFVs with great sight range amazing. Setting this to 80 meters for the recon package and 40 meters for the troop transport package helped the bonus feel good for all vehicles as well as reduce the disparity of vision ranges between AFVs. 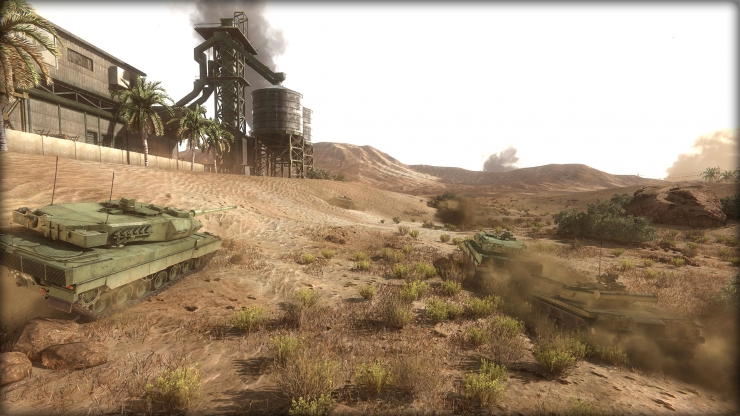 An additional change for vision was that we adjusted the base ranges for the vehicle classes:

We also increased the camouflage penalties from shooting for all vehicles to ensure that there is more tangible changes to camouflage ratings. Overall, this makes players more likely to be spotted when firing.

Additionally, thanks to player feedback we discovered that a few vehicles had abnormally high spotting ranges for their classes. We adjusted the sight ranges down on those vehicles to better fit the desired range for their class.

An additional improvement that you will see in 0.7 is that when you take damage from an unspotted enemy vehicle, that enemy is rendered for you for a brief period of time. This allows players with a keen eye to return fire on enemies that are not making the best use of cover.

We have more plans to keep updating the vision and spotting mechanics. One of these future improvements is what we are calling "progressive camouflage penalties" this is going to change our current system to apply different penalties based off of time and distance between subsequent shots. A vehicle that sits in one location firing extremely fast is going to have more camouflage penalties than one that repositions between each shot. A vehicle that waits longer between shots will have a smaller camouflage penalty than vehicles that fire immediately upon reloading.

Overall we feel these changes will improve the vision and spotting systems and we look forward to your comments and feedback on them.

Find out more about the vehicle performance and other upcoming changes in Armored Warfare!