If you’re already familiar with high-Tier gameplay, you are probably aware of a very specific shell type called PELE and of its impact on the well-being of your crew and internal modules. In this article, we’re going to take a closer look at what it is and how it works in Armored Warfare.

PELE stands for Penetrator with Enhanced Lateral Effect (or sometimes Lateral Efficiency) and is basically intended as a modern version of the old AP-HE, which are armor-piercing rounds with explosive filler, intended to do a lot of internal damage upon penetration. PELE, however, does not use potentially unsafe explosives – instead, the shell is basically a kinetic penetrator that consists of two layers. The outer layer is very hard in order to penetrate the target, while the internal layer is made of soft metal.

When such a shell strikes the target, initially it behaves like any kinetic penetrator would but, unlike a standard penetrator rod, the internal softer part starts compressing upon impact while the outer layer is driven forward and penetrates the armor in a normal fashion. The compressed internal part then expands, shattering the armor as well as a portion of the outer layer into many fragments and creating a significant spalling effect inside the target.

Compared to HE shells and their sub-variants, PELE has a major advantage of being inert and thus much safer to handle. This is also a disadvantage, however – unless you hit something hard like armor, you won’t receive the PELE shatter effect (there isn’t much to shatter and not enough pressure generated), which means that the shell is not practical against soft cover. 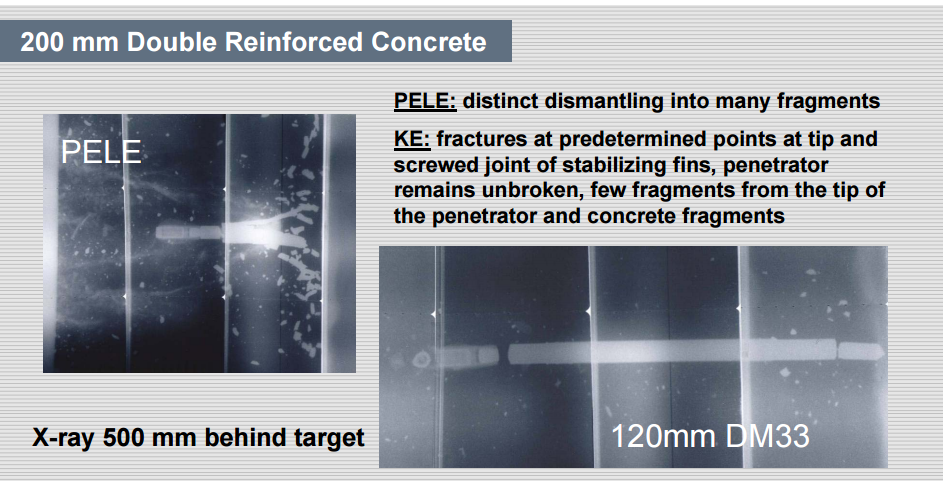 This is not only quite destructive against light armor, but also an effective solution for low-caliber autocannons. The first PELE shells started to appear in the late 1990s and several companies are currently offering mostly autocannon-caliber PELE rounds, although MBT caliber PELE shells (including 105mm, 120mm and 125mm) do exist as well. In tank calibers, the advantage of PELE is precision fire with some lateral effect – a PELE round is very effective against lighter armored targets, but also against buildings with snipers in them (a specific wall can be targeted without blowing up the whole building with a HE round). On the other hand, a tank PELE shell does not have the same penetration capability as a modern APFSDS round.

With that out of the way, let’s discuss how PELE shells work in the game.

There are two types of PELE shells you can encounter in the game:

Autocannon PELE rounds work mechanically like HE rounds with increased penetration. They do not rely on full penetration alone (this happens relatively rarely) but, instead, on the damage dealt even by non-penetrating hits. As such, they do not deal a lot of internal module damage, but can be reliably fired against most lightly armored targets. These rounds are intended as universal.

Full-caliber PELE of the Wilk works differently. Mechanically, it’s now a kinetic round that, upon penetration, creates a large (60 degrees) cone within which internal damage (to modules and crew) is dealt. It does not use any normalization and ricochets at 75 degrees or more. This mechanic is new and is currently working as intended, unlike the pre-0.30 PELE that was mechanically a HESH round and was over-performing significantly. 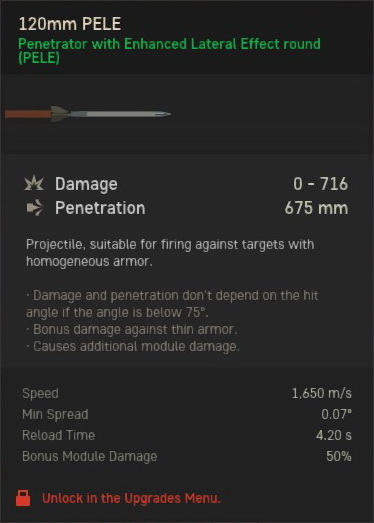 Wilk PELE shells are now best used against thin armor and vulnerable vehicle areas. The thinner the armor is, the more damage a PELE round deals. Ammo rack, engine and crew compartments are all good targets for such a shell but firing against the frontal plate of an MBT will no longer yield the results you are looking for.

We hope that you’ll find this explanation useful and, as always: