For the upcoming Desert Storm Raid, we have already unveiled the T-72M1 used by Iraq, the British Challenger Mk.3 ODS skin and the French ERC-90 F4 skin. Now, we’d like to unveil the American reward of the event – the U.S. Marine Corps skin for the M60A1 Tier 4 Main Battle Tank. 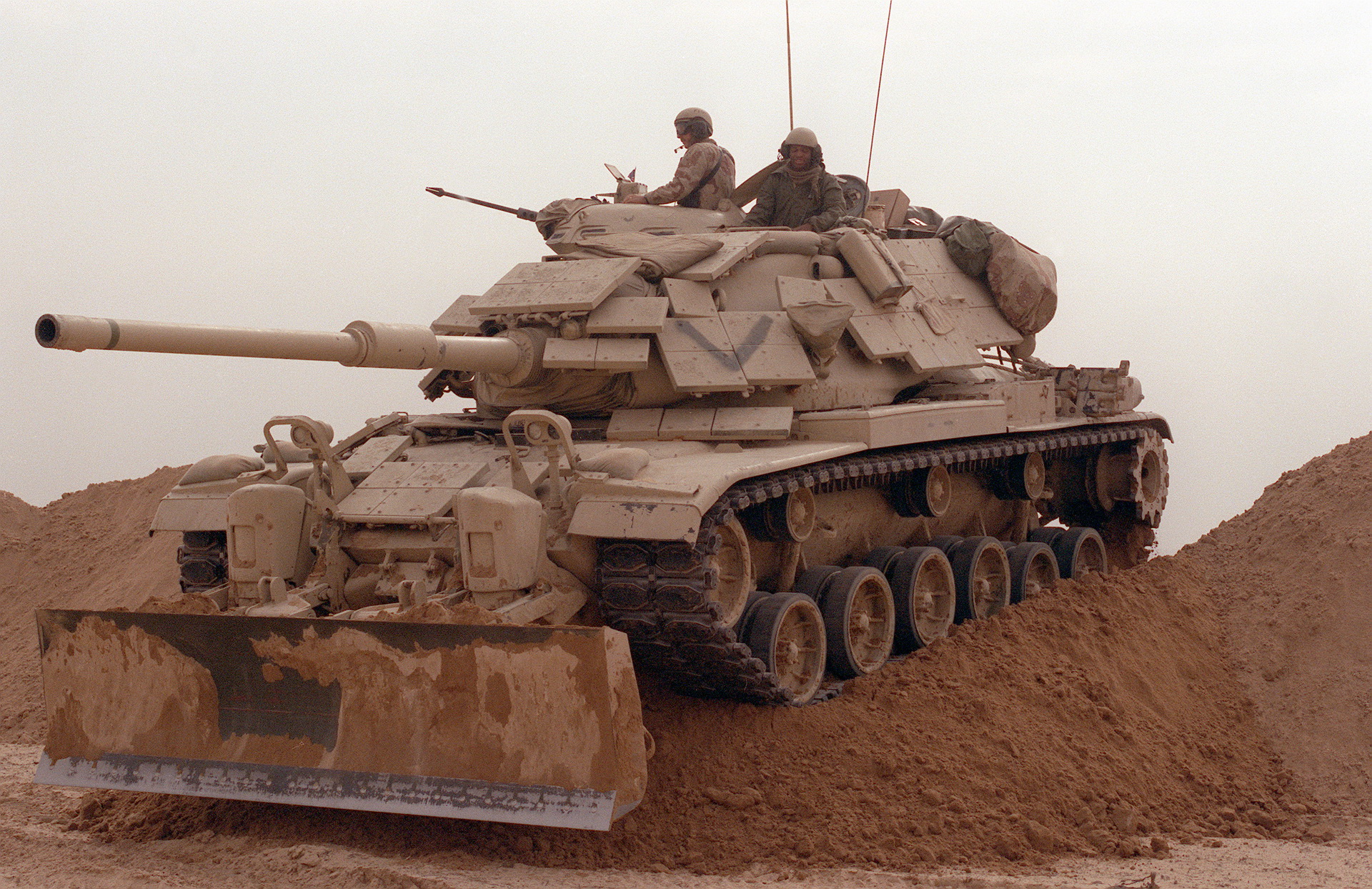 First and foremost, let’s discuss the tank for a bit. We did not want to make an Abrams skin because we have one already (not exactly from the Desert Storm operation, but similar) and we also have the M1A1 Storm as a separate vehicle. The next obvious choice would be the Bradley, but the model we have is based on a later version. It would unfortunately be impossible to make a historically accurate Desert Storm skin for it. So, we went with the Marine version of the venerable M60A1 MBT.

For the M60A1, Operation Desert Storm was the last hurrah. The tank had been around since the early 1960s, having entered service as early as in 1961, and stayed with the U.S. Marine Corps until the 1990s (by 1991, it was, however, supposed to be phased out). By that time, it was completely obsolete, much like a standard T-54/55.

The reason why it stayed in the USMC service for so long was pretty much connected to the whole concept of the M60 series being interim tanks. When it came to tanks, the Marines were more or less at the bottom of the food chain with the coolest new toys generally going to the Army. What that meant was that by the time a vehicle was available to the Marines, it had often been generally obsolete. 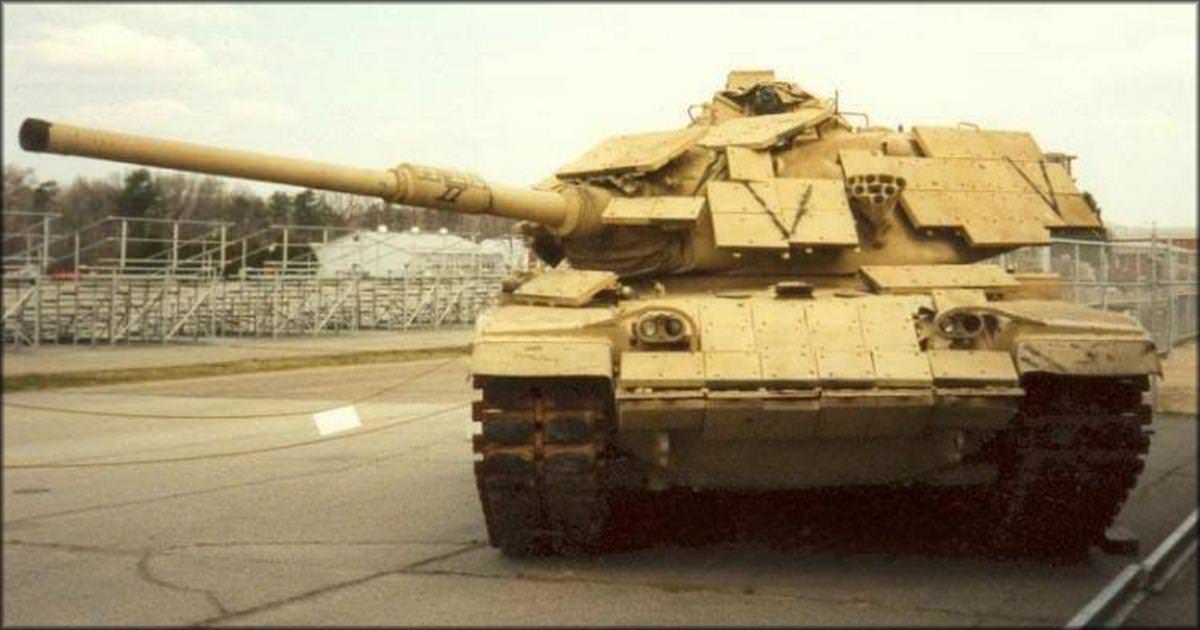 Of course, this wasn’t a desirable state of things, constantly waiting for a new vehicle. In the 1980s, the USMC was offered a new tank – the Abrams – in the M1 version (with a 105mm gun). Not considering it as that big of an upgrade and being fully aware of the plans to upgrade it to 120mm in the foreseeable future, the Marines refused the early Abrams tank and decided to wait for the M1A1, which represented a major upgrade.

That is not to say there haven’t been any upgrades to the M60A1 available. The M60A1 fleet underwent a retrofitting program in the 1970s in order to improve its reliability. A gun stabilizer was added as well, as were plenty of other components. The series of upgrades eventually led to a version called M60A3 and the Marines had a few of those as well (useful for night fighting thanks to their thermal imagers), but by 1991, the mainstay of the USMC tank forces was still the M60A1 models.

At the beginning of the operation, the Marines were offered a switch to the Abrams, but this was, once again, refused due to a lack of training – the USMC preferred the vehicles its crews were familiar with. Compared to the M60A3 model, the M60A1 also featured superior protection in the form of an appliqué kit, which became available around 1988. This kit did improve the survivability of the vehicle, but it did have its own set of problems:

The U.S. Army was ditching the Pattons at that time, so all these kits eventually went to the Marines.

During Operation Desert Storm, the old Pattons performed admirably a knocked out a large amount of enemy tanks (including the T-72s), even though their performance was overshadowed by the Abrams. 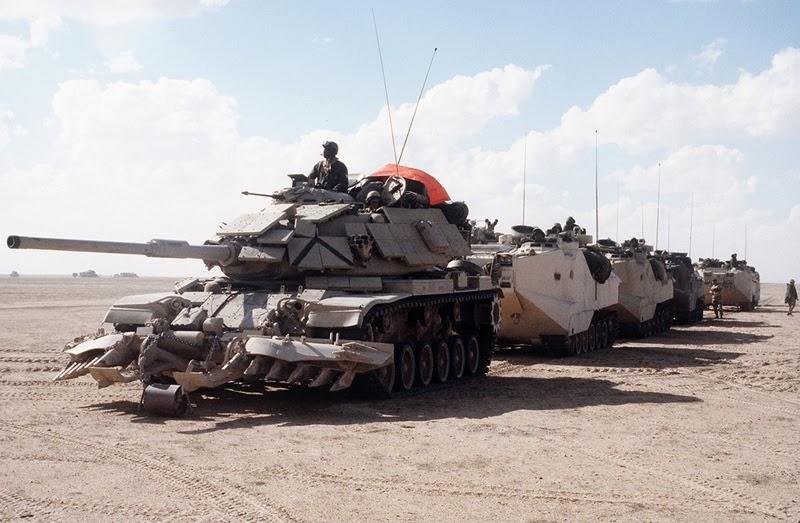 On February 24 at 4 AM local time, the USMC forces were used on the eastern flank of the ground operation with the goal of liberating Kuwait City. Marine tanks fitted with bulldozer kits pushed through the minefields and right into Iraqi positions. The initial fighting was short and brutal and resulted in the surrender of thousands of Iraqi soldiers hours after the beginning of hostilities. In one instance, a Marine M60A1 shot an enemy T-72M at a very close distance right through with the APFSDS penetrator punching through the entire hull and exiting in the back. In another stunning case of success, the 2nd Marine Division captured the entire Iraqi 9th Tank Battalion with its 35 tanks intact with another three thousand prisoners taken.

In the end, the goal of liberating Kuwait City was accomplished in three days. The remaining Iraqi forces fleeing Kuwait were decimated in the famous Highway of Death incident that left the road west littered with hundreds of destroyed vehicles. The photo of it remains one of the iconic images and symbols of the Gulf War to this day.

After the end of the conflict, the phasing-out of the Patton series accelerated and the last U.S. Army unit to do so did it in 1997. 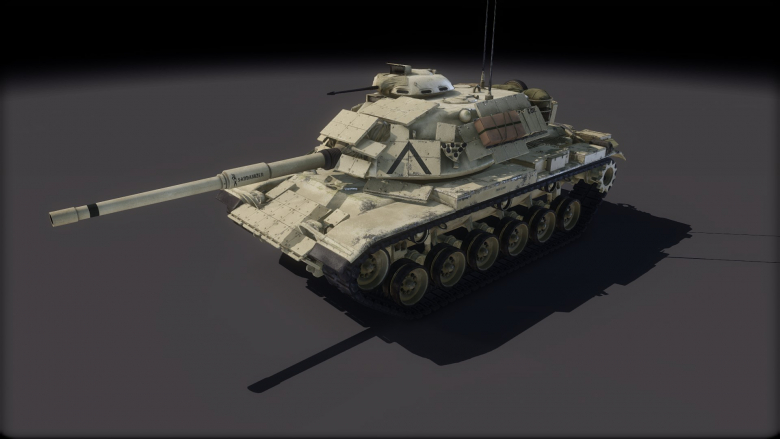 Unlike the Daguet skin, the USMC M60A1 skin does not represent one particular historical vehicle, but consists of elements of multiple USMC M60A1 tanks. The reason for this is that, in real life, the tanks were mostly rushed to the theater of war and repainted by hand, including the tactical chevron insignia.

The base paint is obviously a sand color and existed in a number of different shades, so there is no one “right” color for this vehicle. The chevrons on the hull and the turret do not signify specific tactical unit markings – they are there for various Coalition forces so that they can identify Coalition vehicles. They are mostly aiming down, but on some vehicles they also aim up, there were even cases on both up- and down-facing chevrons on one vehicle at the same time – it varies, as does their execution. Most were spray-can-painted, but some were made using brushes and paint, or even scotch tape. 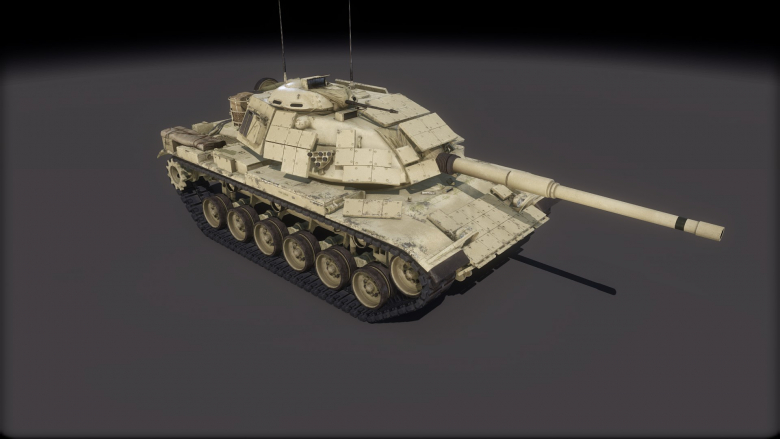 The surface of the model looks appropriately worn-out with the paint chipping off and the engine grills blackened and rusty. These are old tanks and they have to look the part.

As you might have noticed, the vehicle does not feature the M9 bulldozer kit that the Marines used in real life to clear various obstacles and to traverse minefields. The reason for that is that such an upgrade goes well beyond the boundaries of what’s possible to implement as a skin. Removing it, on the other hand, makes the model no less realistic. Not all USMC tanks had this kit installed. 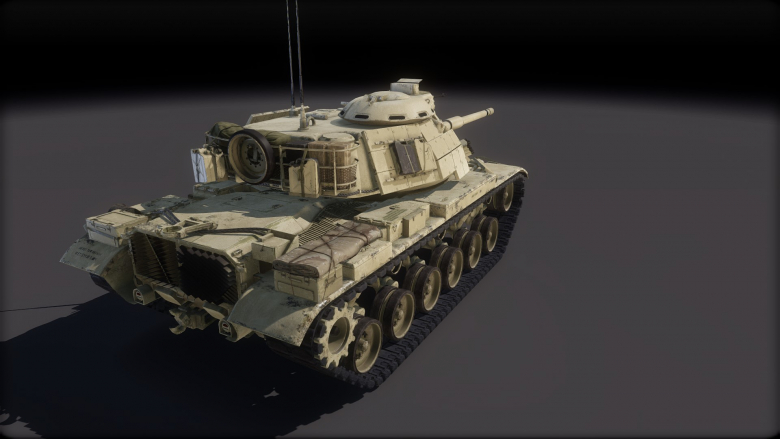 The vehicle is fitted with a lot of boxes and extra canisters for water and fuel. Both can represent life and death in the desert and the marines knew it well. The rear of the turret features a spare roadwheel. 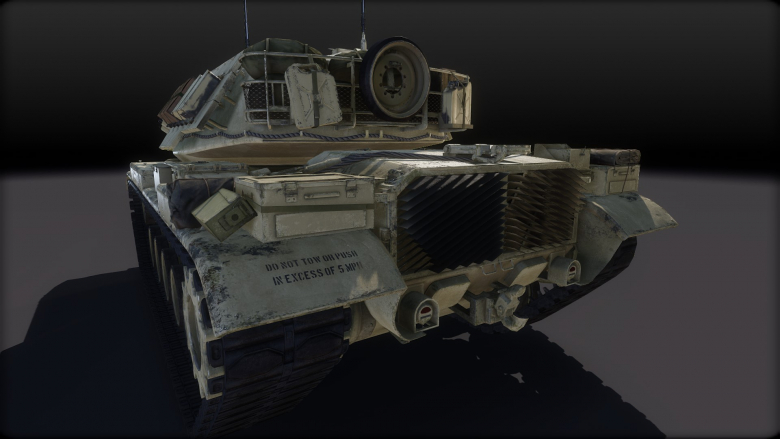 On the right side of the tank, you can also find a spare camouflage net. We have also overhauled the fabric gun mantlet covers for the main gun and the cupola machinegun. 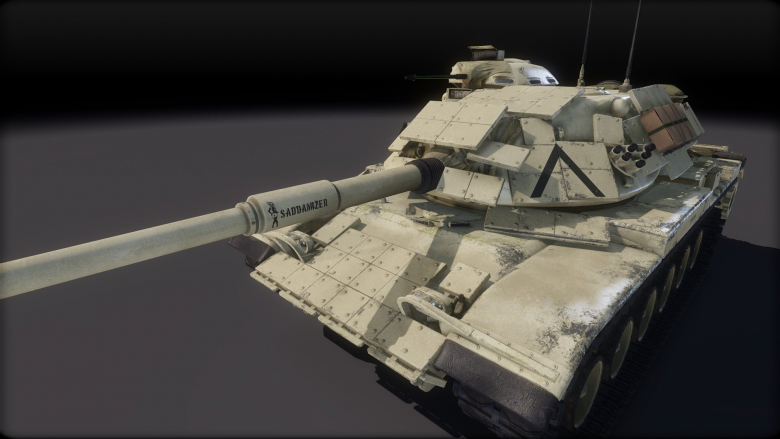 And last but not least, there’s the barrel. There’s a black barrel ring at the end of it, which was seen on more than one of these tanks. But more important is the name. This tank is called “Saddamizer” and yes, that’s a real tank name that existed, because of course it did. The text is complemented by an image of a sparsely dressed lady because of course it is. But that’s soldiers for you. 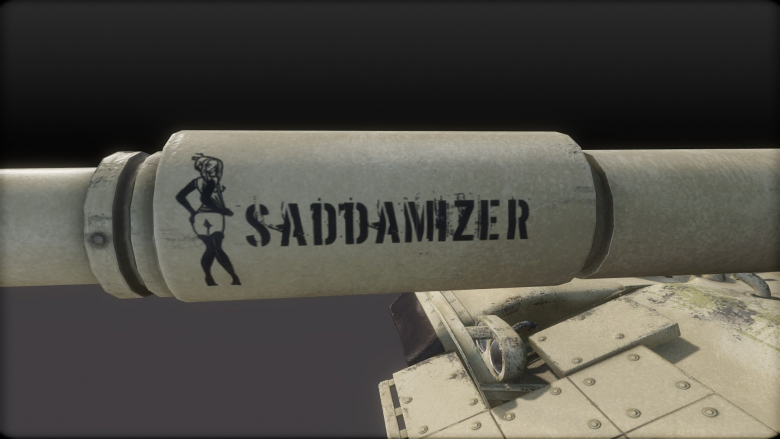 We hope that you’ll enjoy this skin as well as the others we are preparing for you. There’s one more skin remaining and we promise it looks epic. But that is a story for another time. For now: