With the first iteration of Update 0.35 already here, it’s finally time to take a look at the fourth and last skin that awaits you in the upcoming Desert Storm Raid event – Asad Babil, also known under the name “Lion of Babylon”. 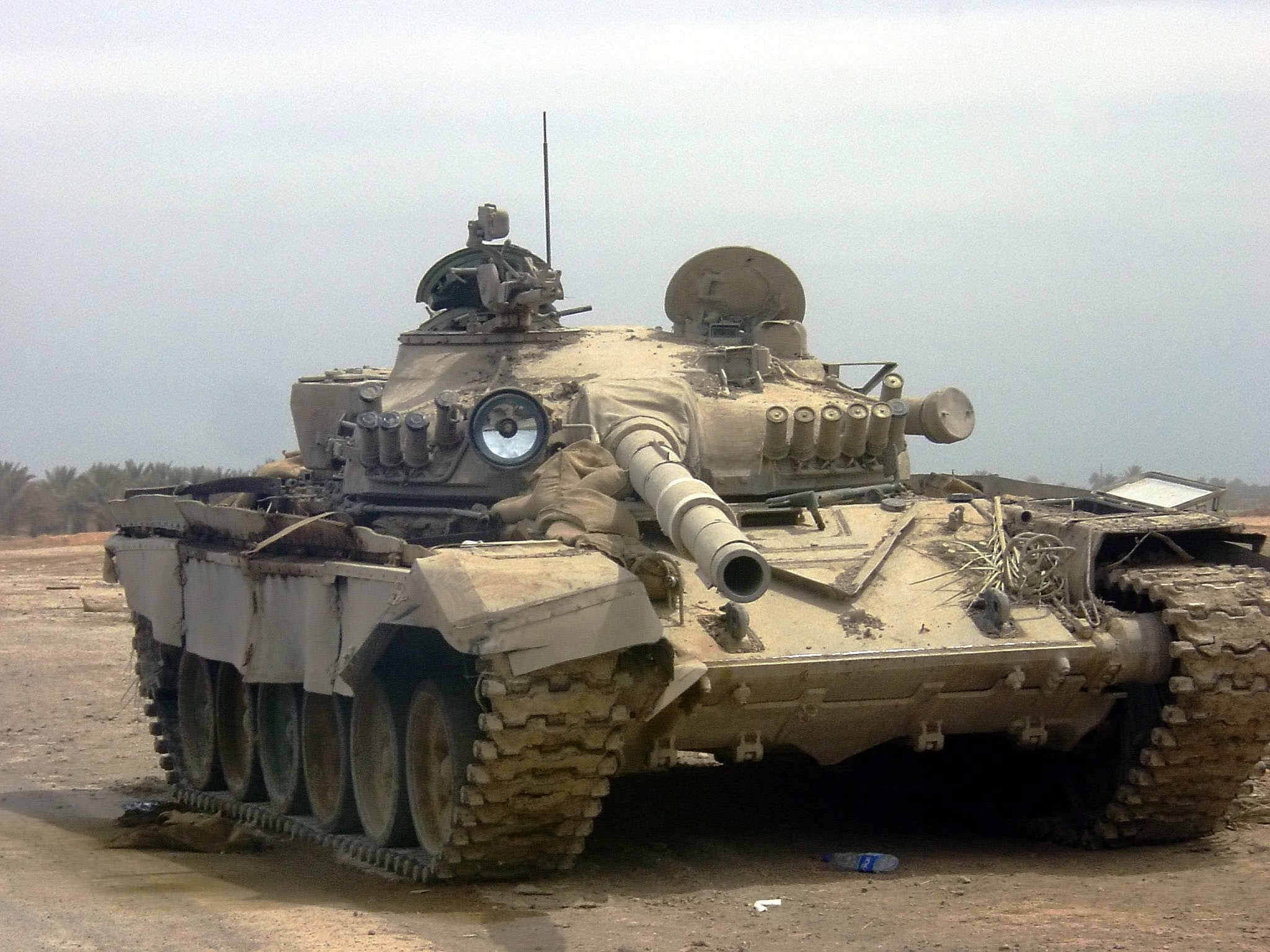 Anyone familiar with the name probably already figured out what we needed to introduce the T-72M1 for. The Lion of Babylon (which is the direct translation of its Arabic Asad Babil name) is an Iraqi locally modified T-72M or T-72M1 MBT (we’ll get to the details below) and possibly one of the worst MBTs of all times, although, to be fair, it perhaps does not deserve this reputation based on what it actually is. Let’s take a look at it a little closer.

In the 1980s, Iraq waged an incredibly devastating war against its neighbor, Iran. Hundreds, if not thousands of tanks were lost and both sides were pretty much buying up anything on the market that could move, had a cannon and some armor. Both countries were sometimes supplied by the same unscrupulous entities and these arms deals kept the conflict going for more than half a decade.

An interesting side-effect of this was that by that Iraq found itself in possession of an incredibly wide array of armor by the time the war was over. There were Soviet MBTs (T-62s), MBTs produced by other Warsaw Pact countries (Czechoslovak T-55s, Polish T-72s), Chinese MBTs and APCs (Type 59 versions) Czechoslovak APCs (OT-64), French AMX-10P IFVs, Hungarian light armored cars and even hundreds of machines from Brazil. Things were equally bad when it came to the other branches of the Iraqi military and this mess was something Iraq never got rid of to this day. But that’s neither here nor there. 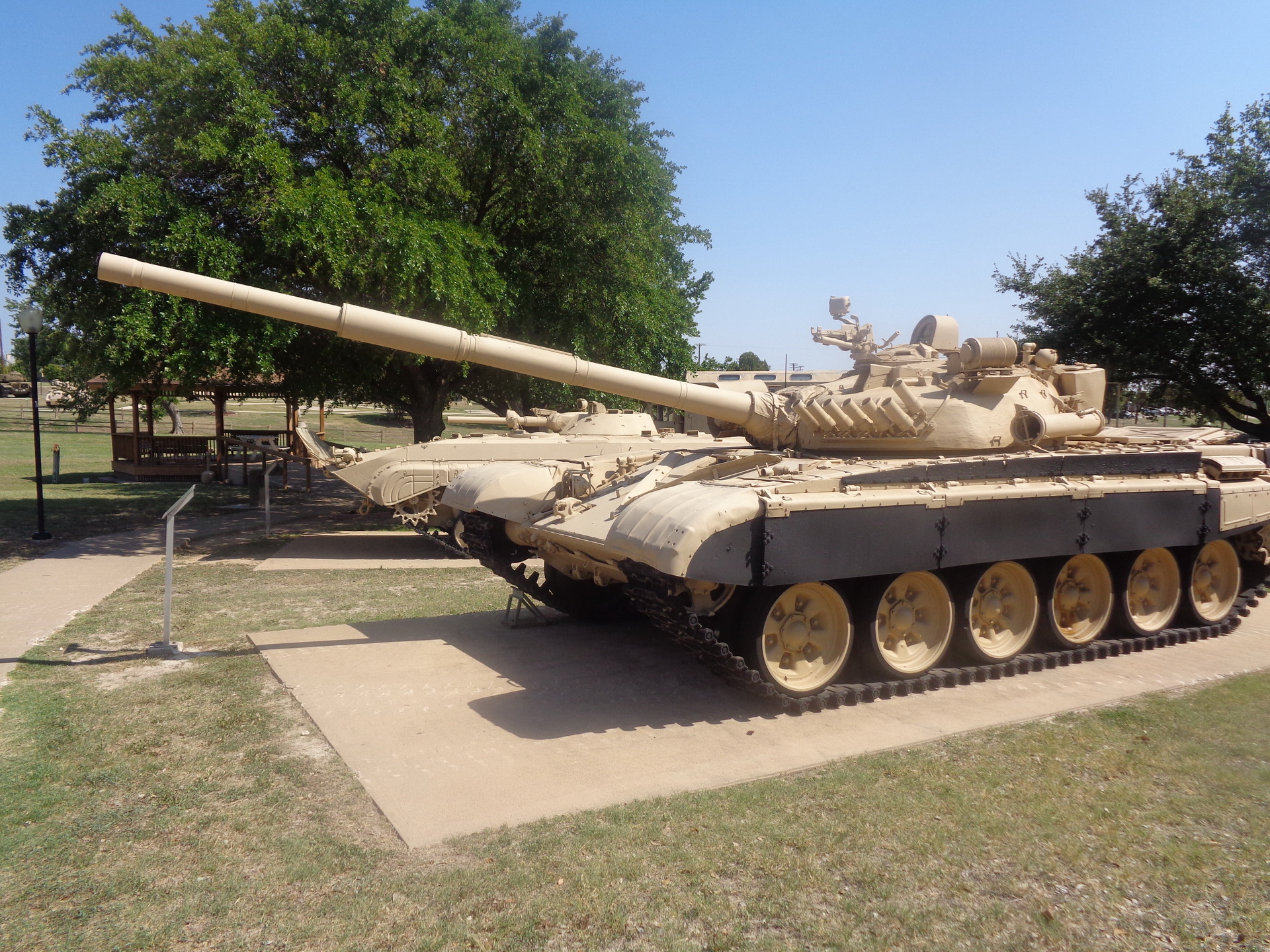 Today, we’ll focus on one particular acquisition that took place between 1982 and 1990. Roughly 500 T-72 MBTs were sold to Iraq during this period of time. The origin of these tanks is quite interesting as well.

Many western sources typically claim that these tanks were Polish, but that’s not the case – or at least, not entirely. Local Warsaw Pact reputable sources claim that not only was the origin of most of these tanks the Soviet Union directly, but a healthy dose of them came from Czechoslovakia. Between 1986 and 1987, Czechoslovakia exported 90 brand-new T-72M1 MBTs to Iraq. As for the Soviet MBTs, it’s quite possible the Soviet Union was simply covering the trade and the rest of the tanks were Polish. 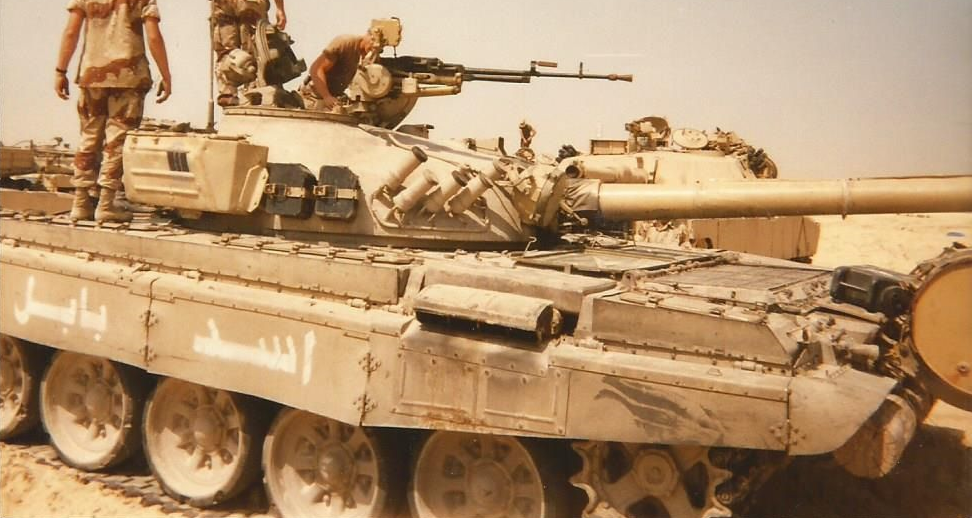 It is generally estimated that by the onset of the Gulf War, Iraq had approximately 300 T-72M tanks and 200 T-72M1s at its disposal. The matter is further complicated by the fact that Iraq apparently managed to import a number of T-72M and T-72M1 part kits from Poland and locally assemble some tanks at a factory in Taji with the help of Polish advisors. These tanks were generally referred to as “Asad Babil” (Lion of Babylon).

Here’s where the real confusion starts. Nobody truly knows whether any tanks were truly assembled in Iraq and if so, how many and of which type. At least one Asad Babil prototype existed (the skin we are presenting today is based on it) and another T-72M tank, unveiled during an expo in 1988, was claimed to have been assembled in Iraq. Some sources claim the Asad Babil tanks were downgraded even further compared to the standard T-72M/M1 models, but these seem to be just speculations. The truth will likely never be discovered as the Taji plant was thoroughly destroyed during the Gulf War.

In time, multiple sources would start referring to all Iraqi T-72M1s (or even T-72Ms) as “Asad Babil”, regardless of how incorrect that was at the time. Today, the name is used rather commonly for all captured Gulf War era T-72M1s.

The export T-72M1 wasn’t a great tank to fight in a desert. It was a tank designed more or less with the Warsaw Pact requirements in mind and lacked such essential elements as proper air conditioning. There have been some modifications to it made by the Iraqis, but few actually increased its combat value. 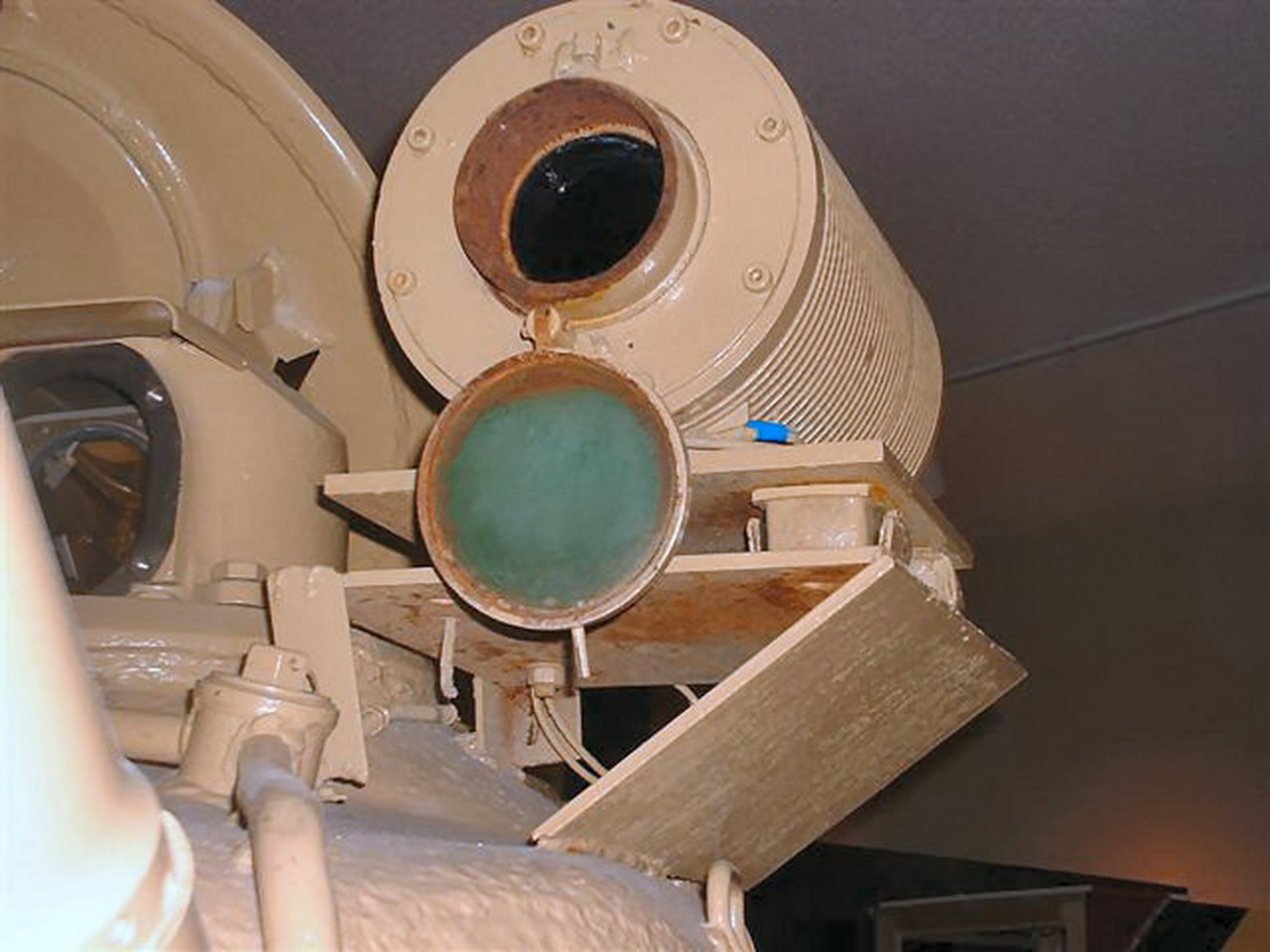 One of the most notable additions was a Chinese IR dazzler, located on a steel tray on the left side of the turret. This dazzler was intended to confuse IR-guided missiles. Unfortunately for the Iraqis, it would prove utterly ineffective and worthless, either by design or because, according to Zaloga, the U.S. forces had modified the TOW guidance to take this threat into account.

Another problem was the ammunition. The Iraqi forces used obsolete, second-rate cheap ammunition, often with hardened steel penetrators. These old rounds had been designed with fighting the M60 tank series in mind, for which they were quite sufficient, but couldn’t hold a candle to the top of the line 125mm ammo of the early 1990s.

Legend has it that the Polish also managed to sell Iraq a large batch of training ammunition with soft steel penetrators and pass it off as live ammo. Regardless whether it’s true or not, none of the ammunition available to Iraq was capable of penetrating the M1A1 frontally. In short, by the early 1980s, the T-72M had been a good tank but, by the 1990s, it was already obsolete with the T-72B and later the T-90 taking its place in Soviet service.

The rest, as they say, is history. Despite being one of the most powerful armies in the Middle East at the beginning of the conflict, the army of Iraq got absolutely steamrolled by a combination of superior training, combined arms tactics and modern equipment of the Coalition forces.

The training was perhaps the truly decisive factor. While large, the Iraqi army was, with the exception of some elite units, poorly trained and motivated. The overall military personnel education level, in particular, was abysmal, as the military expanded very quickly after the end of the Iran-Iraq war, leaving little time for quality preparation. There was also a significant class divide within the ranks, as was typical for the Middle Eastern armies. The officers, recruited from “better” families, despised their troops and had nothing but contempt for the “peasantry” they had to command. And, vice versa, the common troops (often partially illiterate) despised and feared their commanders.

Add to it the paranoia and the lack of initiative typical for oppressive military regimes, and you’ll receive the picture of a large but relatively ineffective fighting force that was adequate for fighting another equally built army (Iran was no better in this regard), but woefully inadequate against the NATO or the Warsaw Pact armies, much to the despair of the Soviet, Polish or Czechoslovak advisors, who had been helping the Iraqis prior to the war.

The T-72M1s were typically given to the most elite units of Iraq, the Republican Guard. These troops were not better trained than the rest, but were more loyal and received better pay, food and equipment in general. These were the Hammurabi, Medina, Tawakalna and Saladin Armored Divisions.

Our Asad Babil skin is based on a vehicle that belonged to the 2nd Regiment of the 12th Tank Brigade, 3rd Armored Division “Saladin”. This division saw heavy fighting during the 1973 Yom Kippur War against Israel (losing more than 150 tanks in the process), the Iran-Iraq War, the Gulf War and the 2003 Iraq War. The unit would serve on until its 2014 deployment against ISIL during the ill-fated Northern Iraq Offensive, during which it would effectively be annihilated and subsequently disbanded for good. 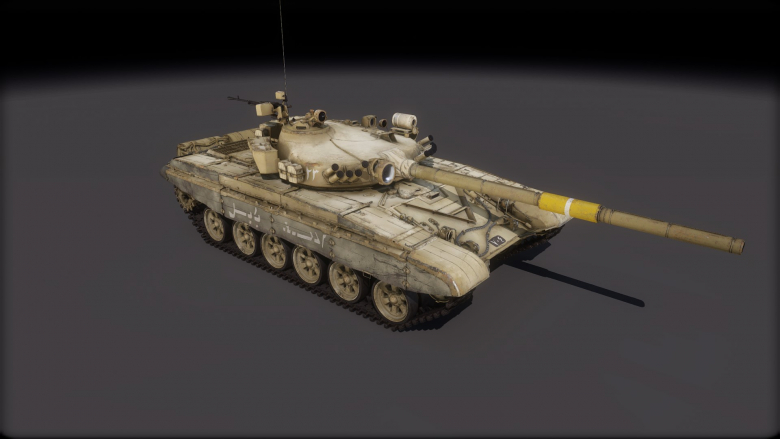 The vehicle is painted in sand color. The most distinctive identification element is the Arabic script on each of its side, saying “Asad Babil” (Lion of Babylon). 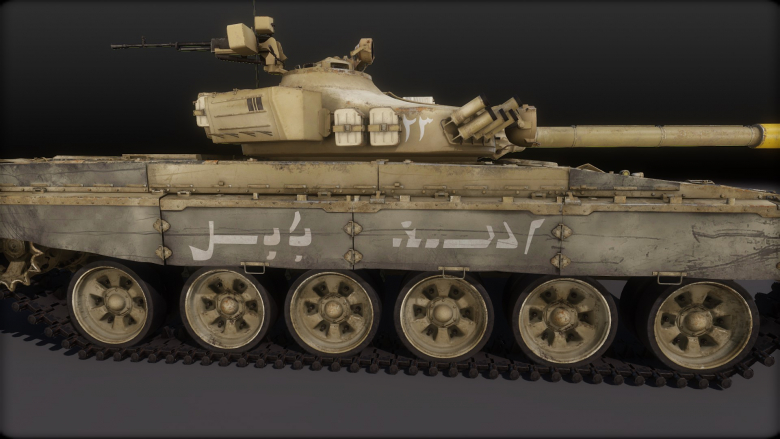 The gun barrel extractor is painted yellow with a white stripe in the middle, a marking of the Saladin Armored Division.

The specific unit can be identified by the three black rectangles painted on one of the turret stowage boxes, which indicate the 2nd Regiment. 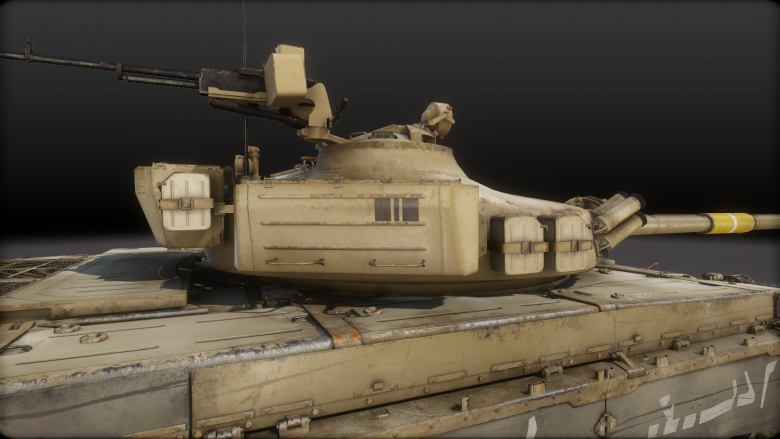 This vehicle bears the tactical number 23, written in Arabic on both its turret sides. 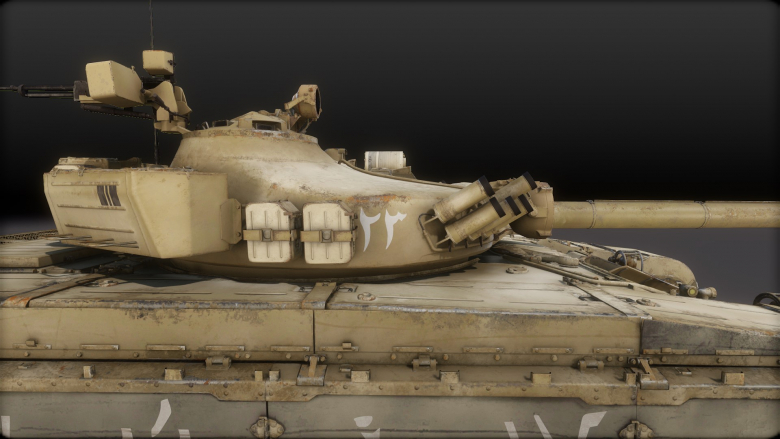 Another number (704) is present in the front on black background. 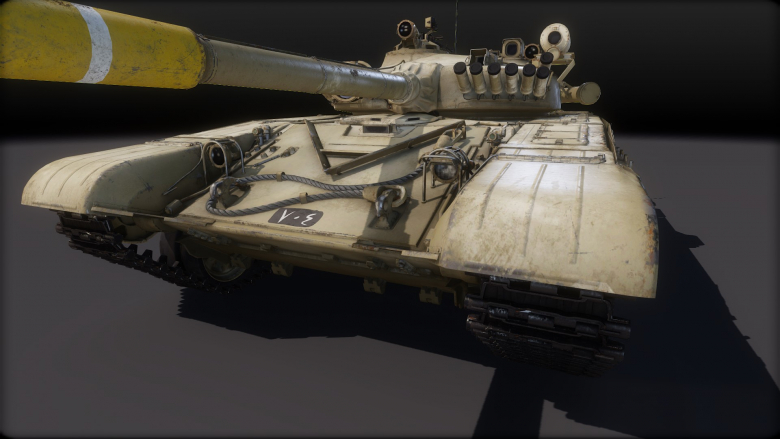 The skin features additional fuel tanks that are present in the rear. Fuel was important during desert combat and these would sometimes stay installed even in battle. 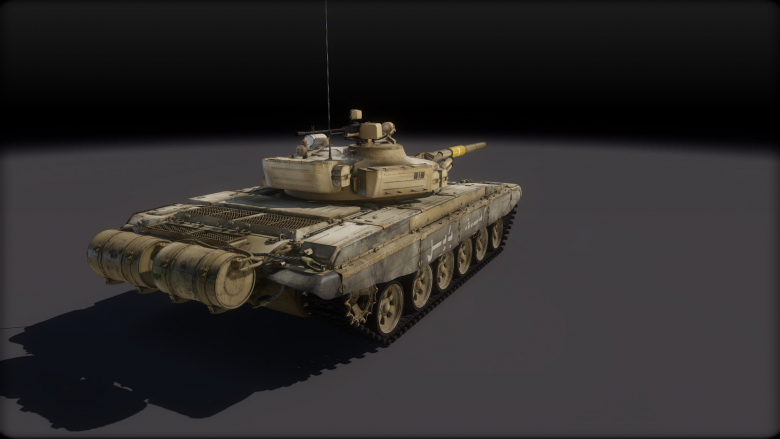 We have added a 12.7mm machinegun to the top of the turret. However, please note that due to the specific way this machinegun was used (it was facing backward), it is a visual model only and cannot fire in the game. 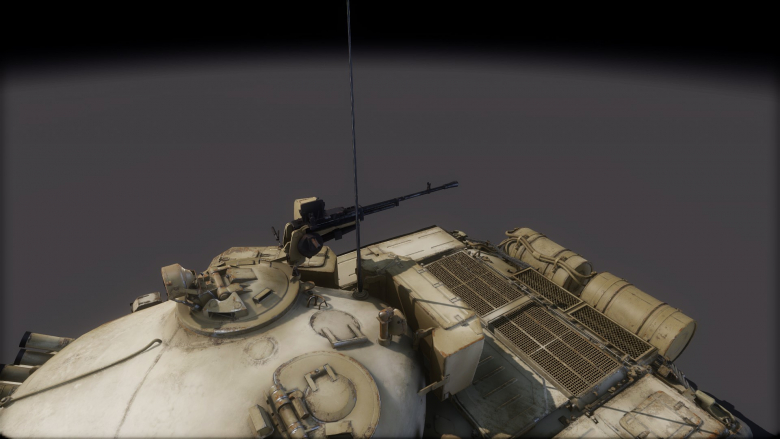 And last but not least, there’s the IR jammer on the left side of the turret. As this is a skin, we can’t really give it additional abilities compared to the standard T-72M1, but considering the jammer didn’t work in real life anyway, we consider it acceptable to include its model without its functionality.

These are the main prizes of the upcoming Desert Storm Raid – four skins with the T-72M1 Tier 5 Premium MBT serving as the paid entry option for the event. But it wouldn’t be a Raid without a special camouflage prize for getting your hands on all four of these skins. 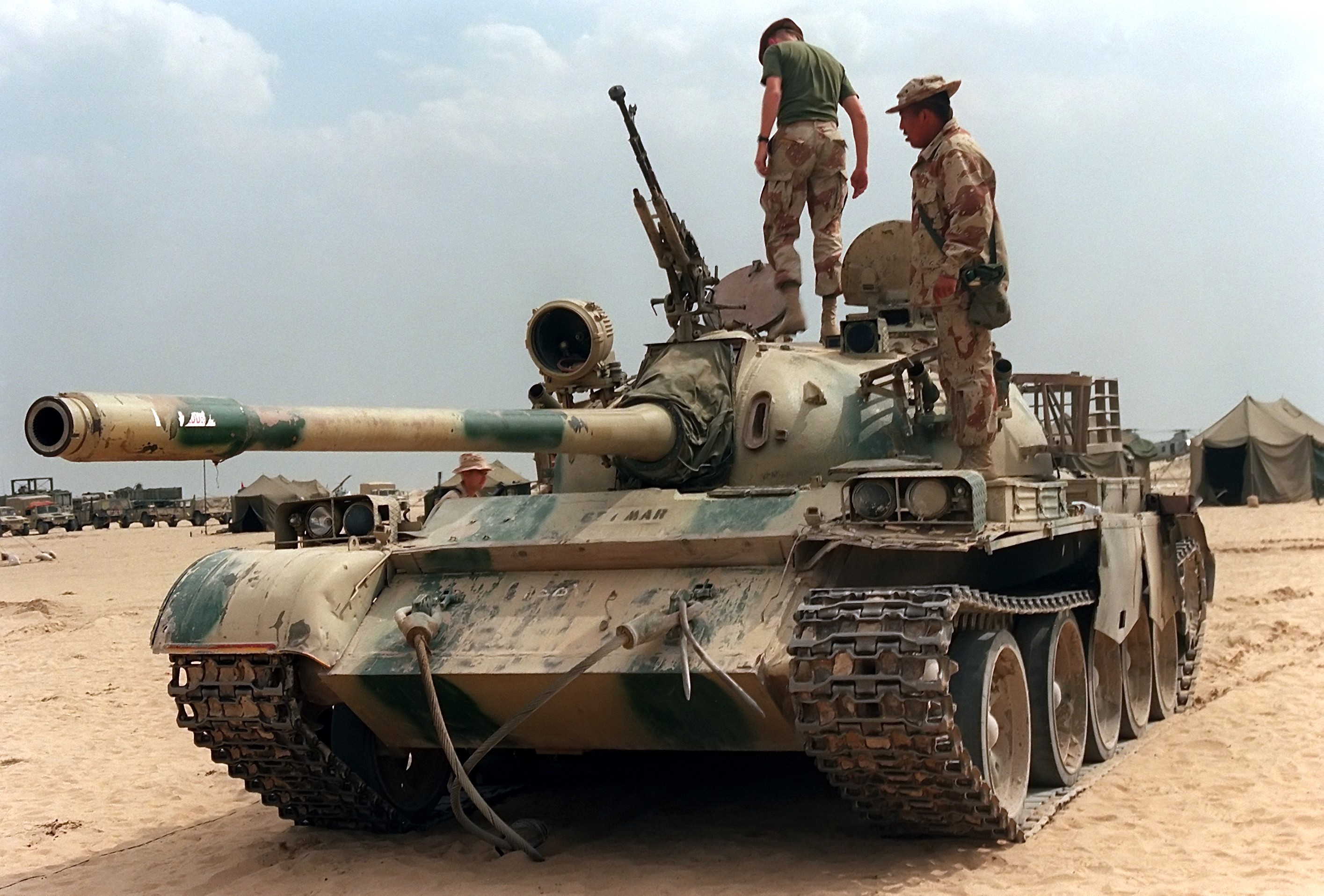 This time, the camouflage is based on a real-life Iraqi pattern that was used during the war, as we mostly have the Coalition patterns in the game already. The pattern consists of sand-colored background and wide green stripes that are perfect for anything that fought on the Iraqi side during the war, for example the T-55 and T-62 models as well as the BMPs. 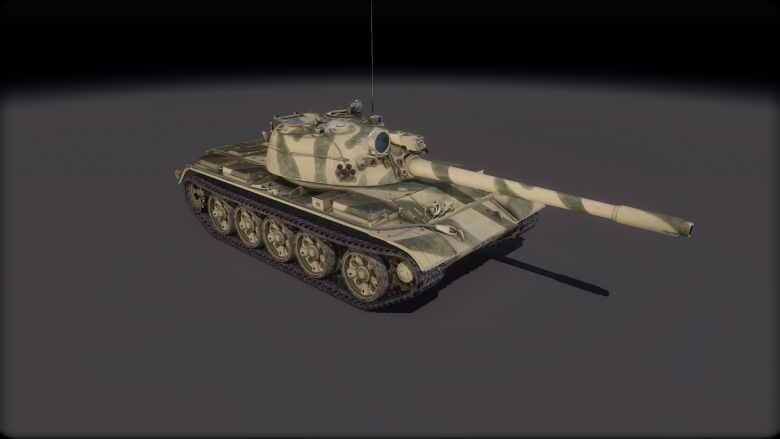 That’s it for this Raid’s rewards, commanders. You now have several weeks to rest and prepare, as the event will begin no earlier than mid-April.

But in case this Raid isn’t up your alley, we are already working on more free events that will take place alongside it and after it, which we’ll tell you about when the time is right. For now, stay safe out there and, as always: