Author: Huginn (with special thanks to PanzerAce)

Today we are going to take a peek at some of the more advanced CV90s that have been built, and how the technological levels have progressed through the years. The focus will be mostly on vehicles that are currently in service, with some prototypes showing up. Please note that this text is of a much more technical nature than my previous introduction to the CV90 family. 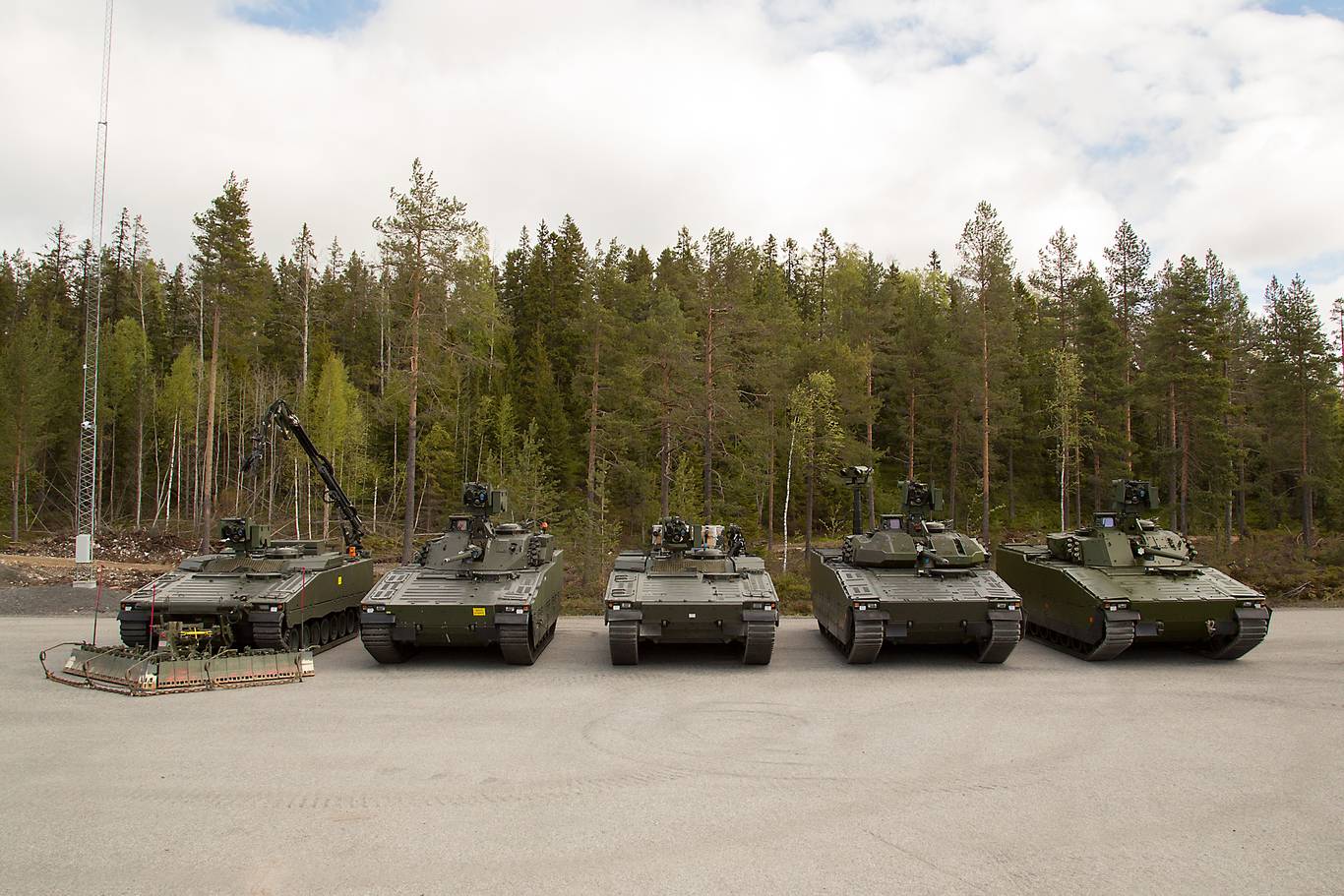 There are many variants of the CV90 in service in a multitude of countries, mainly in Northern Europe. Nearly all of these variants are Infantry Fighting Vehicles, with a few exceptions.

To get an overview of how the development of the CV90 went from its first stage of mass production, we’re going to have to delve a bit deeper into what it was actually like in its first version, which would be the Swedish Strf 9040.

Comparatively, when the Strf 9040 was approved for Swedish service in 1991, it was a relatively modern IFV. It had certain qualities that gave its Scandinavian users a serious advantage in the northern terrain, but it also had a serious drawback in its Fire Control System, as it was a bare bones UTAAS Gunner’s Sight with no computer assistance. As a result, in its first version the vehicle had neither a ballistic computer nor a stabilizer. This was because Sweden’s military didn’t have the money to fully upgrade the CV90 directly after it was accepted into service and instead it spent the next 11 years modernizing the Strf 9040 from the “A” variant to “C”.

The C version is equal to the CV9030 Mk.I if we compare internal systems, with the exception of the Ammo Programmer for the 3P multipurpose ammo. The C version entered service in 2002 and the Norwegian Mk.I in 1994.

Today, the Swedish Strf 9040 variants of the CV90 family are considered the least advanced in active service. 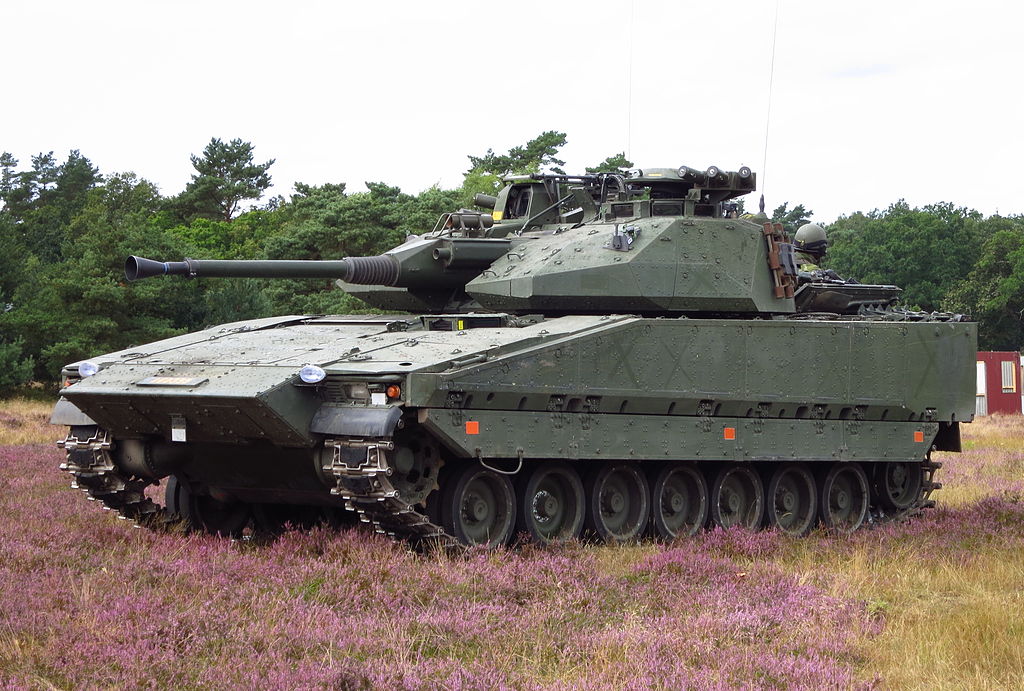 Right after Sweden approved the Strf 9040 for service in 1991, Norway showed its interest and asked for a 30mm Bushmaster II armed vehicle for trials. It was 3 years before Norway signed a contract for 104 vehicles. The Norwegian military was more or less satisfied with the field tests in which the CV90 outperformed its opponents in heavy terrain, but it was not happy with the technology level of the CV90. Norway’s army wanted a better protected IFV with a computerized modern Fire Control System.

And so it was that the CV90 took its first step towards modularity in 1994. 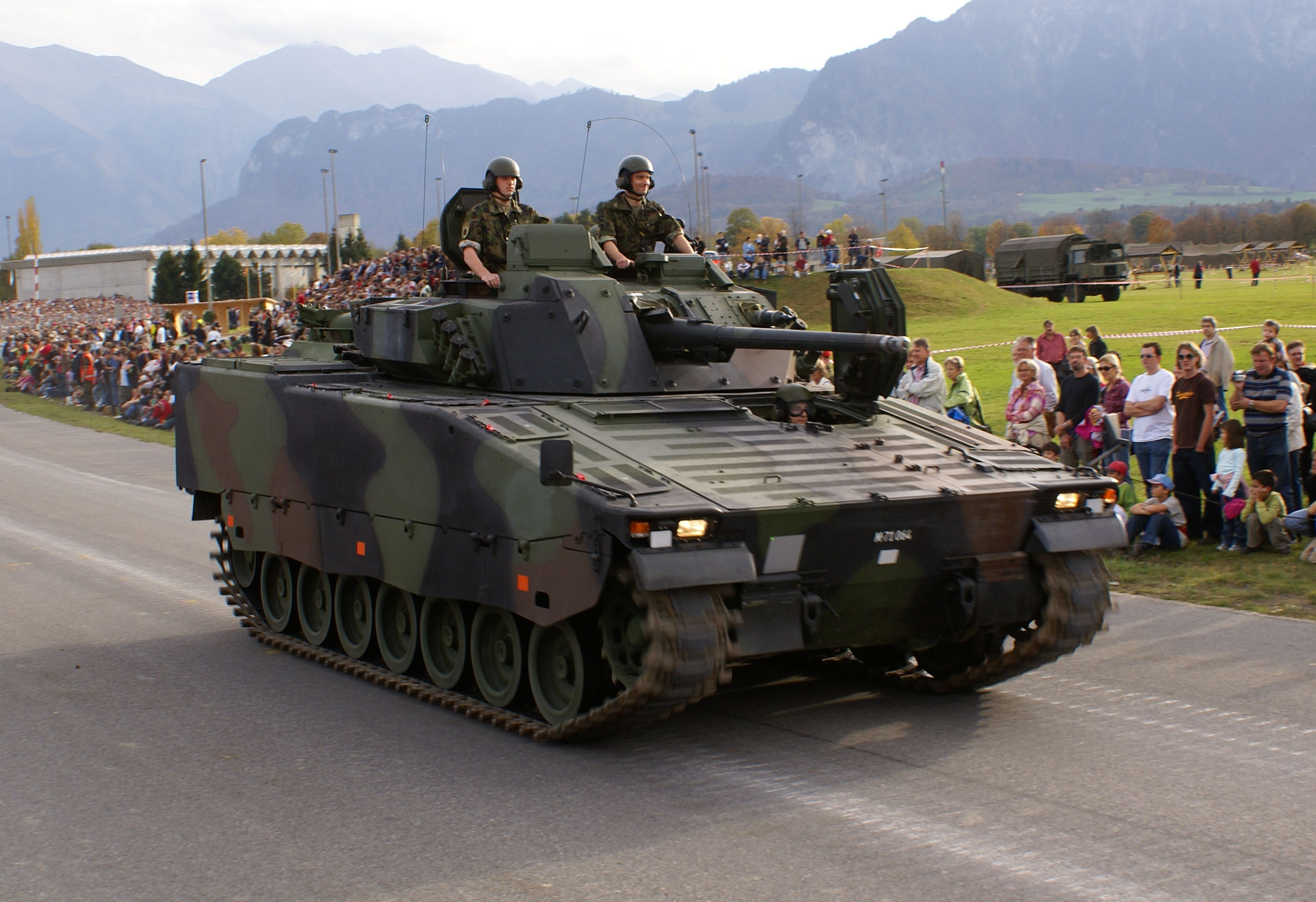 The CV9030 Mk.II was ordered by the Swiss army in 1998. It was a slightly modernized variant with improved protection. The Mk.II also had a much more modern computer system in the form of a Vehicle Control System that could be improved with a Battle Management System and a Defensive Aid Suite. It also received a new engine - the Scania DS16 with 680 hp. With all these upgrades, the tank became slightly heavier, ending up with a total weight of 28.7 tons over the previous Mk.I variant’s 26 tons.

An order was placed for 186 vehicles and all were delivered between 2002 and 2005. Finland also ordered the same CV9030 Mk.II that Switzerland got with some minor modifications, making it slightly lighter than the Swiss variant. The development of the CV90 eventually led to the CV9035 Mk.III version, which was completed in 2004. The Netherlands and Denmark became interested in this program and Estonia recently bought 45 vehicles from the Netherlands in 2014.

The vehicle’s weight increased significantly from 28 tons to 35 tons. Most of the weight increase was caused by a considerable increase in protective capabilities, including even higher standards of computerization and increased internal space volume. The engine was also modified to produce 810 horsepower so that mobility would not suffer due the massive weight increase.

We can see there was a scaling increase in the quality of technology mostly in the digital part of the vehicle, as this is where it was lacking the most from at the beginning. The basic vehicle is excellent in the sense that it’s easily configurable for any country’s requirements. With a multitude of alternatives in weaponry, protection, modularity and mobility, the CV90 chassis has a large potential for improvement.

The current peak of the CV90 family is the most recent Norwegian CV90 fleet. At this point in its development, the vehicle has been redesigned to be completely modular, even to the point of sharing turrets and internal systems at will.

What used to be only one Norwegian variant was split into 5 different types. The progression of the modern vehicle development culminated in the full modularity of the CV90 platform, growing from its first roots in the Norwegian vehicle park.

The variants have an extremely high number of different high-tech solutions and equipment available. Going through them all would take me a long time, so we’re going to keep to the variants that are viable for Armored Warfare. We have 2 out of 5 vehicles that are legitimate suggestions for tier 10 placements in the game - the Infantry Fighting Vehicle version, and the Recon version.

They are both using the newest chassis for the CV90, which is the Mk.III version. There is some debate as to whether the armor on the 2015 version is superior to the 2004 version, but the military has so far only stated that the armor is “smarter” than previous versions. It’s impossible to find out if its better, but we can safely assume it is. 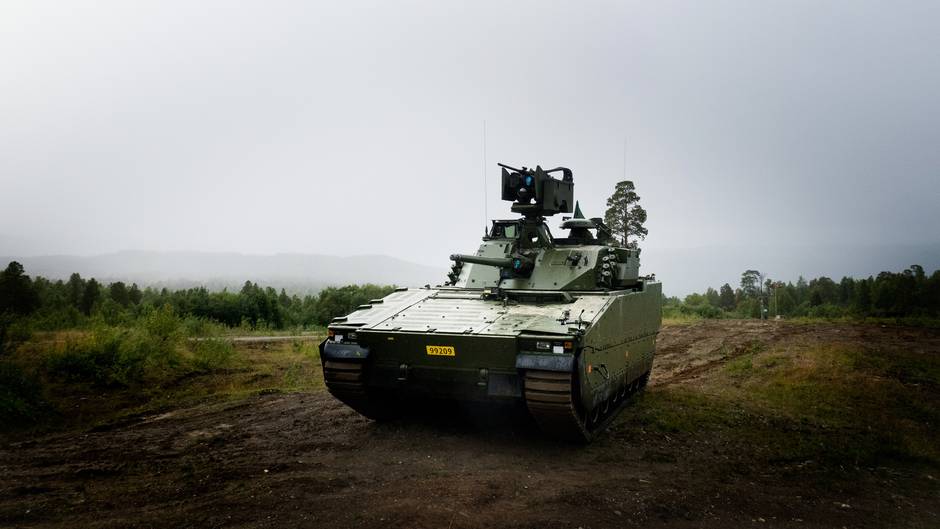 Fortunately, some details about these vehicles have been released. All the optics devices were modernized and the vehicles operate on a highly advanced Virtual Reality Battle Management System named “AWARE”. Trials for this Battlefield Management System were performed using the “Protector” Remote Weapon Station mounted on the vehicles.

This system provides a real time feed of enemy positions and their type through the optics, vastly improving battlefield awareness instead of relying on map data only. This BMS is an upgrade that is applied to all the frontline vehicles.

One thing that is unique to the Norwegian CV90s is the use of rubber tracks. With the same life expectancy as a steel track, this solution offers a whole lot of improvements. Some of the major advantages include fewer vibrations, better acceleration, better off road driving capabilities and improved comfort for everyone onboard, not to mention the fact that the vehicle saves one ton in weight this way.

The recon vehicle is internally very different when compared to the IFV version. It has a crew of 6 people operating all the sensors, including an electro optical mast that can extend up to 6 meters into the air. It is a modular Vingtaqs II Sensor system that can be customized based on mission requirements. Normally, it is equipped with radar, a thermal camera and a day-vision camera that can detect enemies up to 30 kilometers away, depending on the situation, and it also has Laser Target Designation capabilities. The turret of the recon version is also very different in shape – this may be due to an applique armor kit or to decrease radar signature, but these are only speculations as there is currently no information available on the turret design.

There are probably many more interesting features on the CV9030 Mk.III, but for now these are the only official ones I could find.

With the rapid pace at which the technology of the CV90 family is progressing, future modernizations might appear quite soon. But what is currently being tested and what platforms are BAE Systems using?

There are three vehicles that BAE Systems have used recently as trial platforms: the CV90 Armadillo, the CV90 FRES and the CV90120-T. All of these vehicles are equipped with new technologies that are classified but can give us an insight into the future of CV90 chassis development. 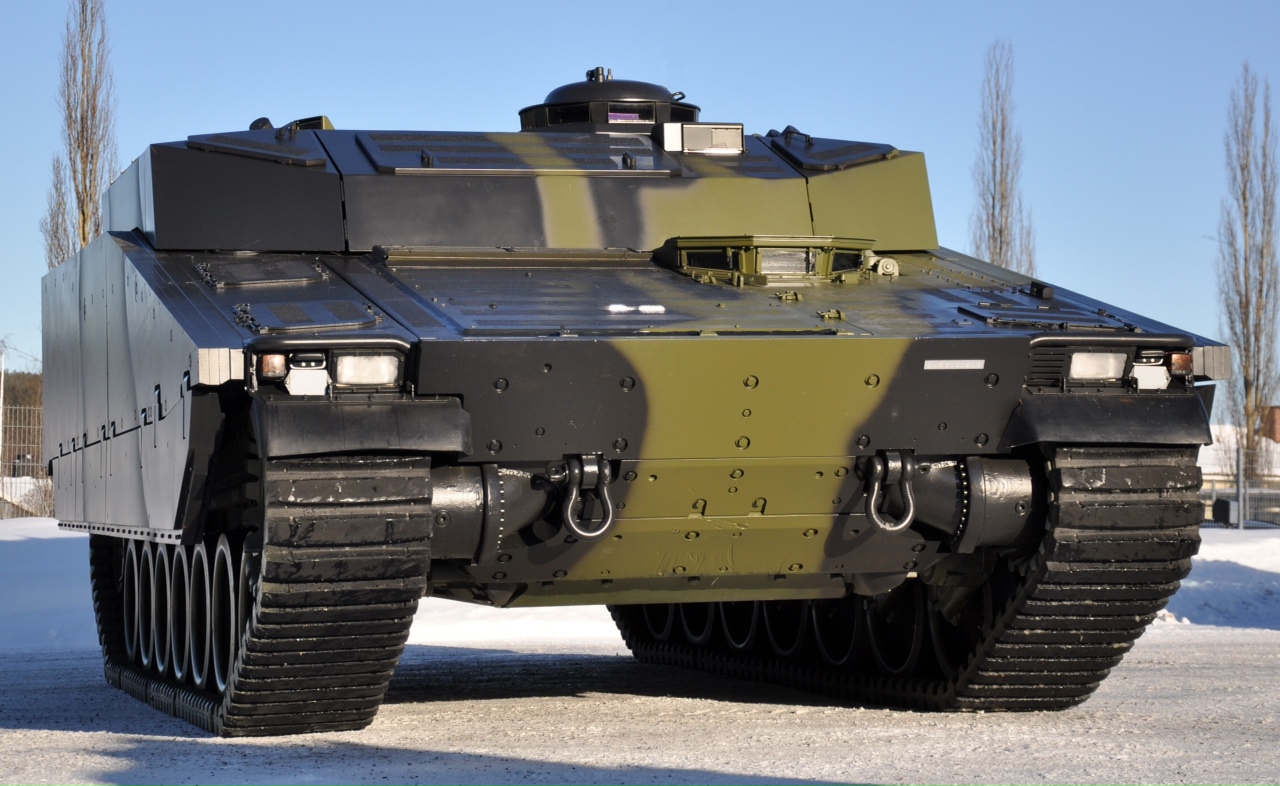 The CV90 Armadillo is the most unconventional of the three platforms. BAE Systems turned to Formula 1 racing to get their inspiration for vehicle improvement here. The result was a new active suspension dampening system that was originally made for carbon chassis vehicles with a weight of 700kg or less. They adapted it for a vehicle that weighs 35 tons and, as a result, mobility was substantially increased in battlefield terrain conditions, allowing the CV90 Armadillo to increase its off-road maximum speed from 70 km/h to 100 km/h, an increase of 40%. The Armadillo is also the vehicle to test many different types of protection systems, the best known of which is the Saab LEDS, a multi-stage active or passive protection system depending on client demands. 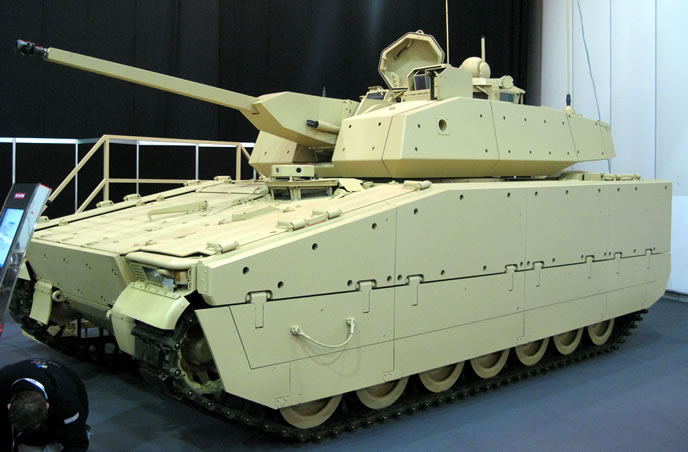 The CV90 FRES was related to the British FRES program, which required a large amount of optics and systems in order to meet the requirements of the British Army. The most notable optics system present on the CV90 FRES is the “JANUS”, a ball-shaped stabilized panoramic electro-optical sensor. It is mounted on the top of the turret and can rotate 360 degrees with 90 degrees elevation, allowing it to follow air targets as well. To properly fit the requirements, the vehicle was also equipped with an advanced military network system and a new turret equipped with a compact 40mm autocannon. 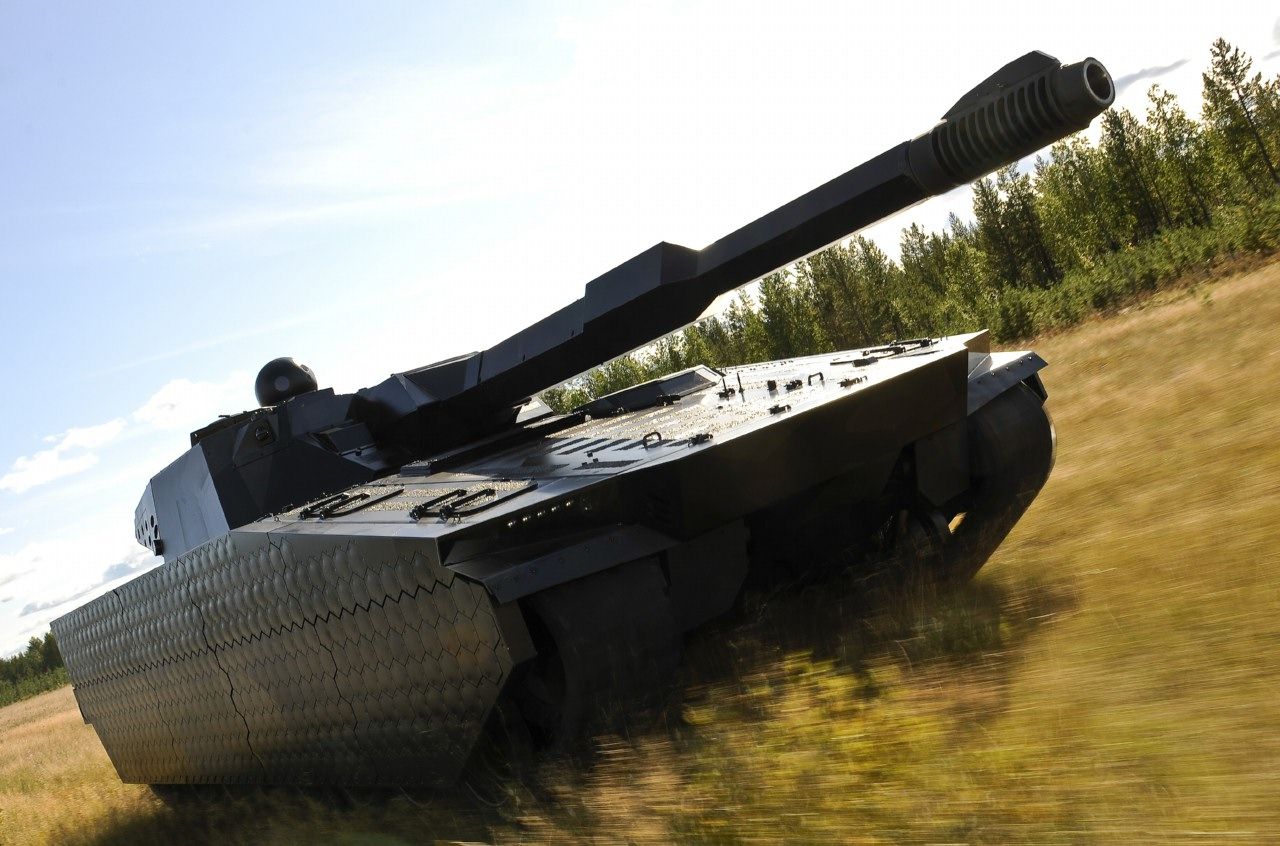 The CV90 “Ghost” is probably the most different CV90 platform due to its unique design. It is first and foremost an advanced prototype derived from the CV90120-T, which was armed with a new 120mm smoothbore gun from Rheinmetall, a new turret and the ADAPTIV thermal cloak system.

The ADAPTIV system is the main reason this platform stands out amongst other vehicles since it has the ability to become completely invisible to modern thermal cameras. It is a hexagonal-shaped tile system that covers the entire vehicle, capable of dissipating heat across the entire chassis. The preview trial videos have shown that it can mimic car wrecks and civilian vehicles without being detected at all. The turret was modified as well to minimize radar signature and it should be mentioned that the vehicle can also be fitted with radar absorbing materials.

It is designed to be completely invisible on the battlefield of today and the future and truly lives up to its nickname.

The development of the CV90 has been an interesting road, from its first basic iteration to advances in mobility, protection and firepower. Even today it still has more potential than many other platforms. Currently, there are few other platforms that can compare to the CV90’s success and potential in all the above-mentioned categories. With all the promising prototypes and technology being tested, who knows what the future of the CV90 platform might bring.