Author: Huginn (with special thanks to PanzerAce)

In 1984, the Swedish military put out a requirement for a vehicle with a medium sized cannon, high mobility and high troop carrying capacity within 5 years. A year later, Bofors Defence and Hägglunds & Söner joined up under the Swedish Defence Material Administration to develop and design a vehicle that could fit the requirements for the Swedish mechanized battalions. The Pbv (Pansarbandvagn, Tracked Armored Carrier) 301 had been replaced by the Pbv 302 in the 1970s, but the Pbv 302 itself was becoming outdated and needed replacement. The Swedish military needed a more capable design to accommodate the demands of the modern battlefield. 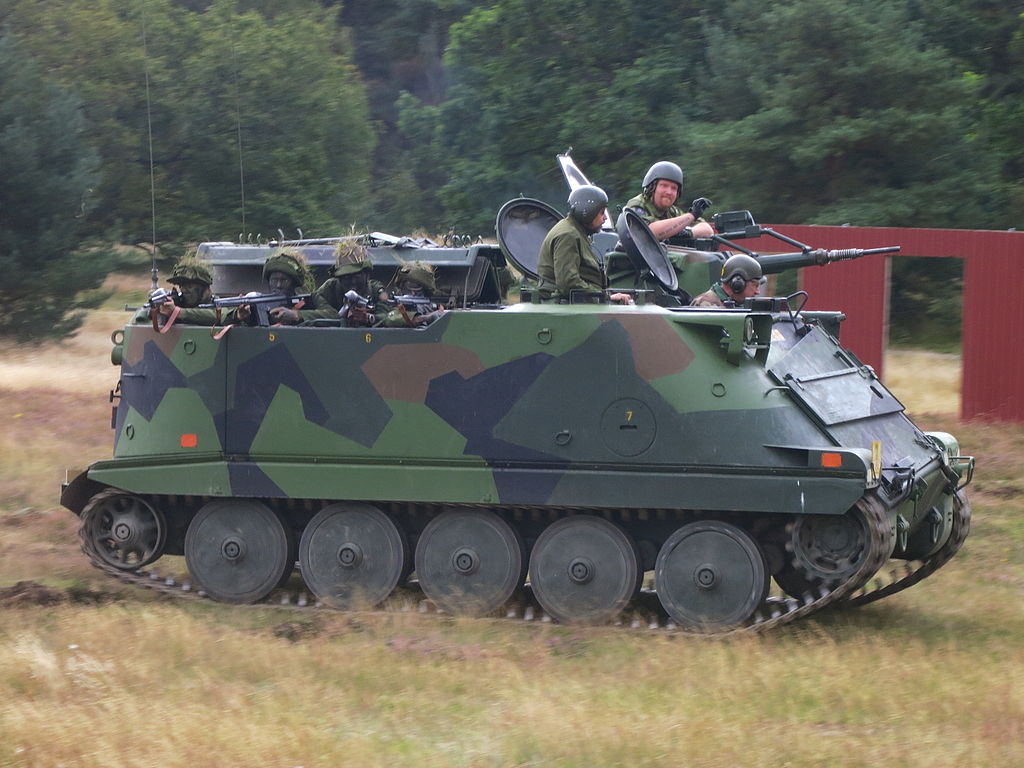 The CV90 is a highly versatile design that has been improved significantly since its conception. There are many versions in active service, mostly in the form of Infantry Fighting Vehicles. Across most of its platforms, the chassis and profile remain unchanged with few exceptions, making it easily recognizable and familiar. Indeed, the biggest changes in appearance tend to be minor exterior modifications to the chassis, modifications to the turret or major internal changes such as those observed in the latest service variants.

The design of the CV90 can be traced back to 1973 and the UDES developmental projects. The UDES designs were attempts to theorize and introduce technical standards and prototypes for several types of vehicles for the Swedish army, while staying within economical reason and efficiency. One project, the UDES 09, was a paper study that could have inspired the future CV90 design. It was of an infantry fighting vehicle with a 25mm turreted autocannon. 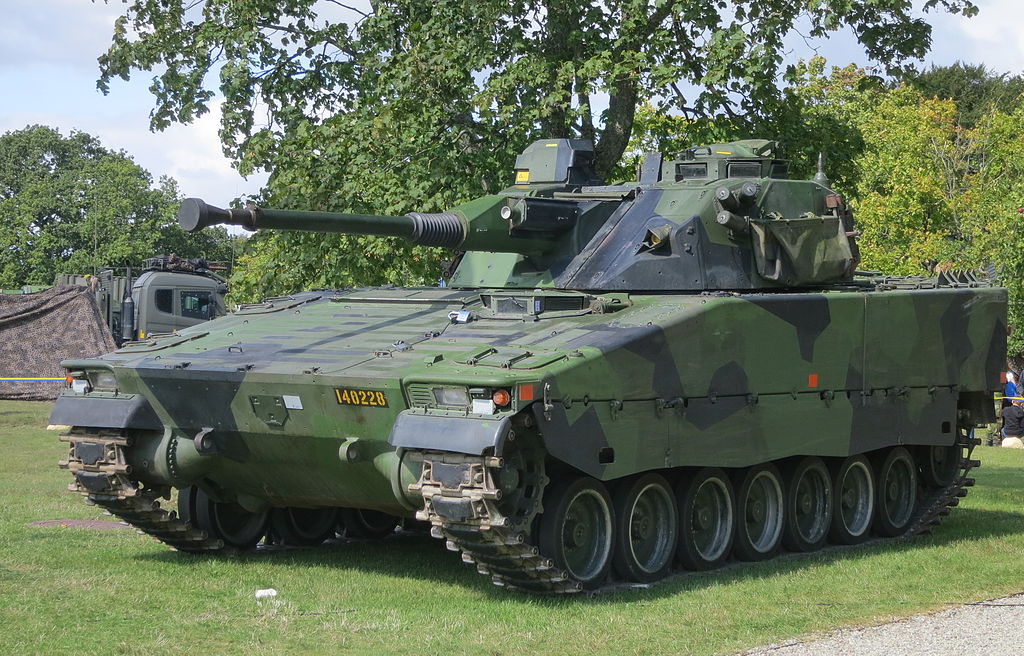 In 1988, the Swedish army’s requested 5 prototypes of the CV90 were delivered for trials. The prototypes had 3 different main armaments as options: a 40mm Bofors L/70 autocannon, a Bushmaster I 25mm autocannon and a 30mm Bushmaster II autocannon. The other two prototypes were unarmed test drive versions to experiment with the chassis in field conditions. The results were nothing but successful. Mobility exceeded requirements with the Scania Turbodiesel DSI 14 V8 600hp diesel engine providing a top speed of 70km/h. With 8 infantrymen in the back, the fully loaded vehicle weighed 23 tons.

It could also be amphibious with some preparation. In addition, the armor was very acceptable for an IFV - military-grade steel that was thick enough to protect the crew against up to 30mm autocannon shells across the frontal glacis. This requirement was due to the perceived threat of the BMP-3 and other Soviet infantry fighting vehicles that were considered the opposition at the time. 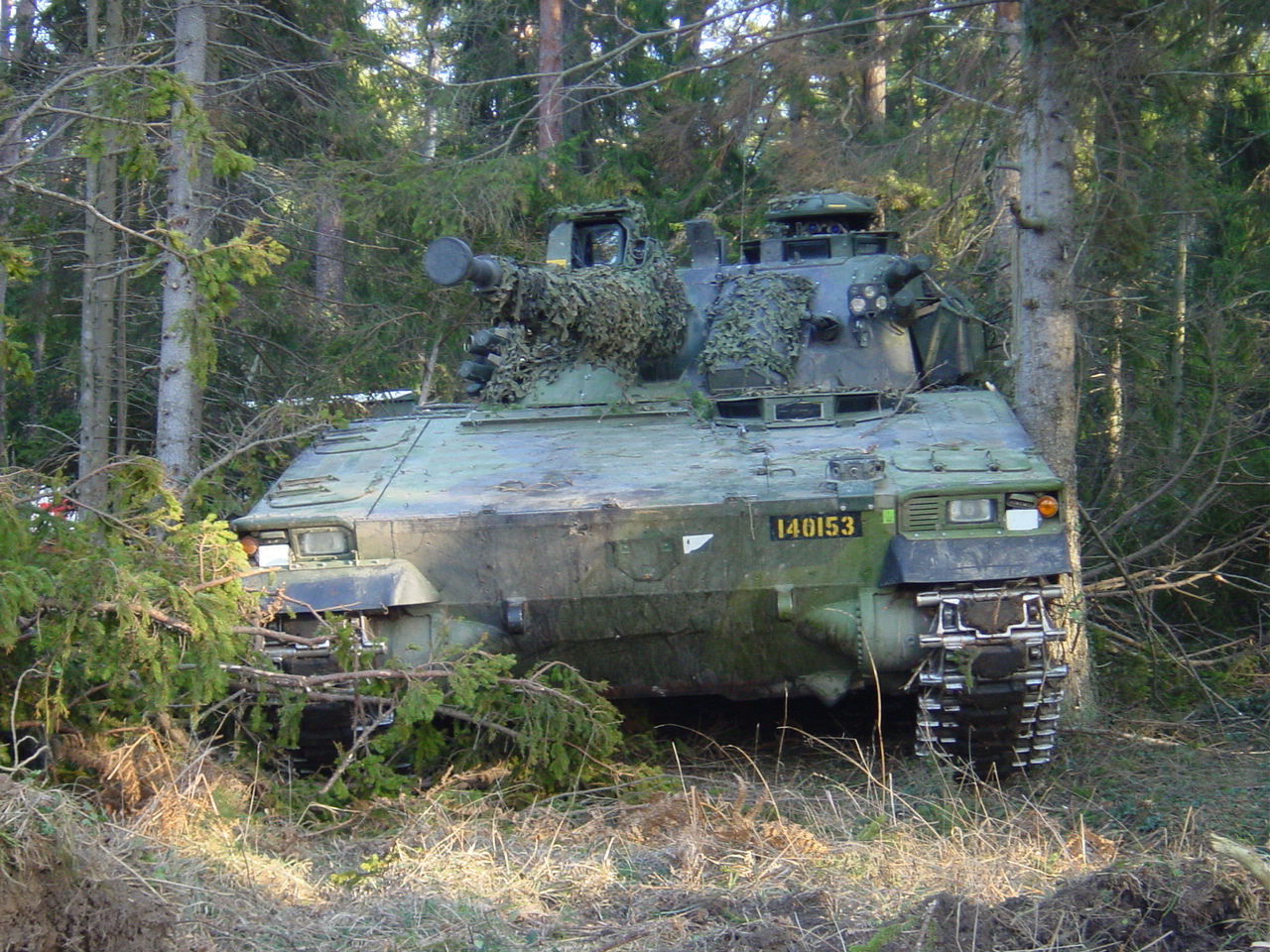 Trials were completed by 1991 and the 40mm version was approved for service in Sweden, marking the first production order for the CV9040, or Strf 90 (Stridsfordon 90). The Swedish army had initially decided to have a mix of 25mm and 40mm CV90s, but shortly before the trials began it decided that the 25mm autocannon had insufficient firepower and part commonality, so they only chose the 40mm version. The Bofors was a well proven anti-aircraft cannon with a history stretching back to before World War Two. Serving on multiple generations of self-propelled anti-aircraft guns, from the Hungarian Nimrod to the American M42 Duster and the M247 Sergeant York, it was a very reliable and interchangeable weapon suited to army needs. In fact, the gun could penetrate 170+mm of Rolled Homogenous Armor with its Mk.1 APFSDS shell, and well beyond 200+mm with its Mk.2. Sweden is the only country using the 40mm Bofors version of the CV90. 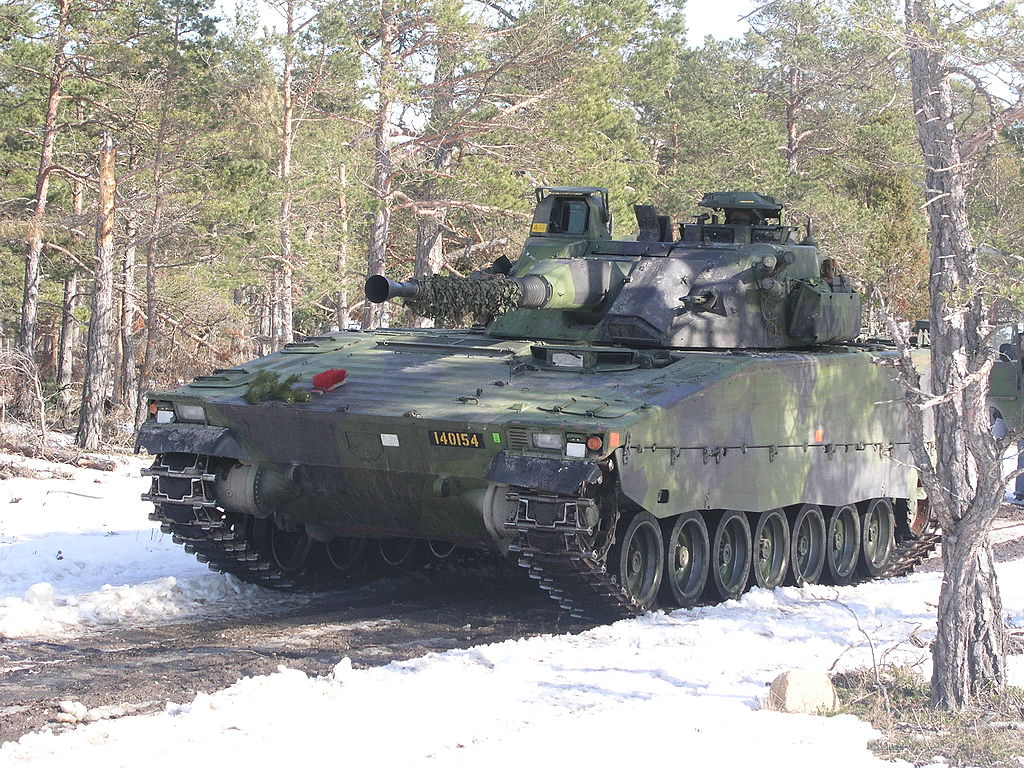 The 40mm Bofors is not without its issues. Ammo capacity with the large 40x364mm is limited to around 232 shells, with 24 of them in a magazine. The 30mm Bushmaster II can carry more than twice that amount, storing around 600 shells. This means you can be on the frontline for a much longer time before returning to base to reload ammunition.

Norway was the first country after Sweden to be interested in getting their hands on the CV90, which would be used for offensive purposes alongside their older and less protected M113s. The 30mm version of the CV90 was shipped to a field test site to run trials alongside its competitor, the M2 Bradley, from the United States. The Scandinavian terrain, extremely varying in fjords, mountains and hills, made the CV90 stand out, as it was designed to operate in that difficult environment. The Bradley faced severe mobility issues when traversing thick snow of up to 50cm in height, which would be crippling for the military of a Nordic nation. Although the Bradley had some advantages, such as better anti-tank capabilities, the CV90 won the competition and a contract was signed for 104 units. Thus, the 30mm CV9030 Mk.1 was the first export model to enter the international market.

In 2004, a newer CV90 with a 35mm Bushmaster III autocannon was completed after 3 years of development. It was then ordered by Denmark and the Netherlands. The IFV had several modern upgrades, including a slightly different turret, overall thicker armor and better IED protection, showing again the versatility and potential for upgrades of the vehicle.

However, not only AFV versions were attempted. In the 1990s, many exotic light tank versions and a twin 120mm mortar version were trialed. The first developed version was the CV90105 TML in 1994. Armed with a 105mm rifled main gun, it was a private venture between Hägglunds and GIAT. However, it was quickly cancelled for classified reasons. Up-gunning the vehicle further, the first CV90120-T prototype appeared in 1998. It had a new turret and a 120mm RUAG CTG 120/L50 120mm smoothbore gun that gave it a firepower equal to that of Main Battle Tanks. 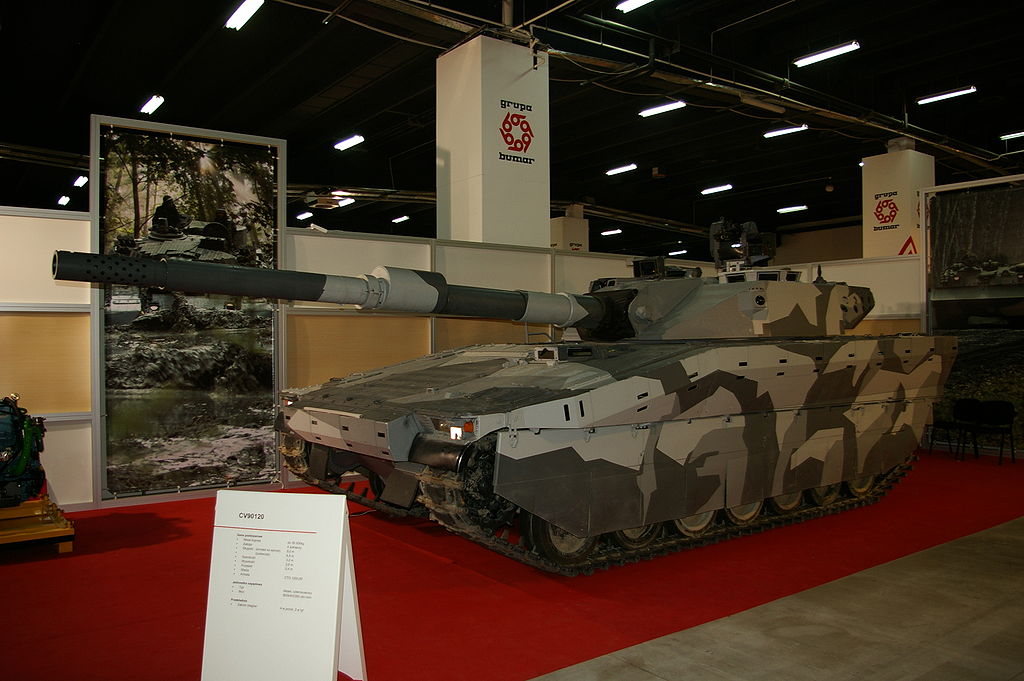 Development of the vehicle still continues. The CV90120 “Ghost”, with vastly improved optics, a new 120mm smoothbore gun and an active thermal camouflage named “Adaptiv”, is now being developed as a next generation stealth vehicle.

There is also a twin 120mm mortar version of the CV90 that is called the CV90 AMOS, which stands for Advanced Mortar System. Development began in 1996, and it has extremely precise firepower and can also do direct fire missions. Although not in service with the CV90, the Amos is used by Finland in its Patria AMV.

Following this success, Hägglunds was purchased by Alvis C&E in 1997, and eventually ended up in the hands of BAE Systems in 2004. BAE is one of the largest military development corporations around. The widespread interest in the CV90 platform and its versatility increased in the hands of a much larger company, resulting in much advancement, improvements and new prototypes on the platform itself after being integrated in 2005.

One example of the newer technology used on the vehicle is the development of an Active Suspension System derived from Formula 1 racing cars. With this new suspension, the CV90 Armadillo broke tank speed records by reaching 100 km/h at the highest velocity in battlefield terrain conditions.

The CV90 did not face combat until November 2007, during Operation “Harekate Yolo” in the Ghormach District, Afghanistan. In the battle, the Afghan National Army came under the assault of a heavy Taliban attack. The 2nd Battalion and Kystjegerkommandoen (Coastal Ranger Command) of the Norwegian ISAF used the CV90 to great effect to support, suppress and retaliate against the large Taliban force, making them retreat with heavy casualties. This was possible due to the excellent range of the 30mm Bushmaster, which allowed the Norwegian forces to outrange most of the Taliban’s anti-tank weaponry, while protected by their large standoff distance.

The CV90 has garnered an excellent combat record in the Middle East, surviving many encounters with IEDs without casualties. There is only 1 recorded casualty from Norway related to the CV90, where a driver died after an IED went off near the vehicle. 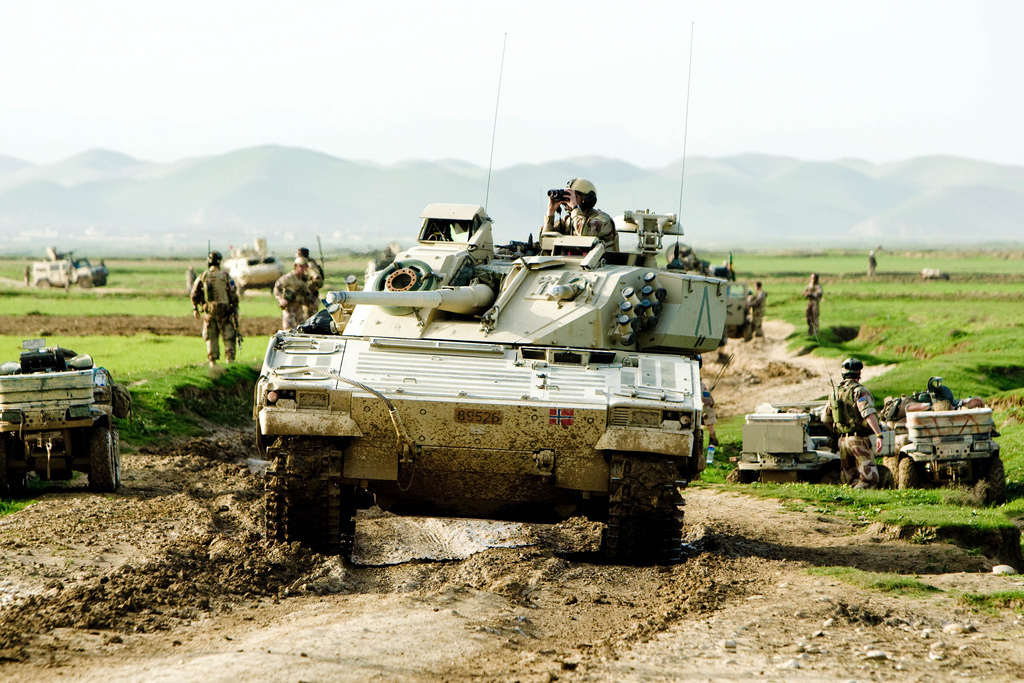 The CV90 is currently operated by Sweden, Denmark, Finland, the Netherlands, Norway and Switzerland. Other countries that have considered and evaluated the platform include the United Kingdom, Canada and the United States. The CV90 is also an excellent platform that has gained a good reputation so far and will probably be continuously upgraded in the future. It is slowly taking over the European market for IFVs, due to its versatility and cost efficient nature.

The Nature of Future Mechanized Warfare