By the end of the war, Germany had designed a large number of extreme projects, ranging from the borderline realistic to the absolutely ridiculous. Possibly the best known of these designs is the Maus super-heavy tank, which has its own peculiar history – but there were many more such designs: giant 128mm, 150mm and even 170mm guns on self-propelled platforms (Selbstfahrlafette), usually based on the 38(t), 38(d), Panther or Tiger chassis. Most of the time these projects never progressed to the prototype stage (although some of the lighter Waffenträgers were actually built and a few of them even fought in the last battles of the war), but the sheer number of such designs was staggering. The fact that such vehicles would be mostly pointless and a colossal waste of resources is clear – the real question is: why did the Germans even bother to design them at all? 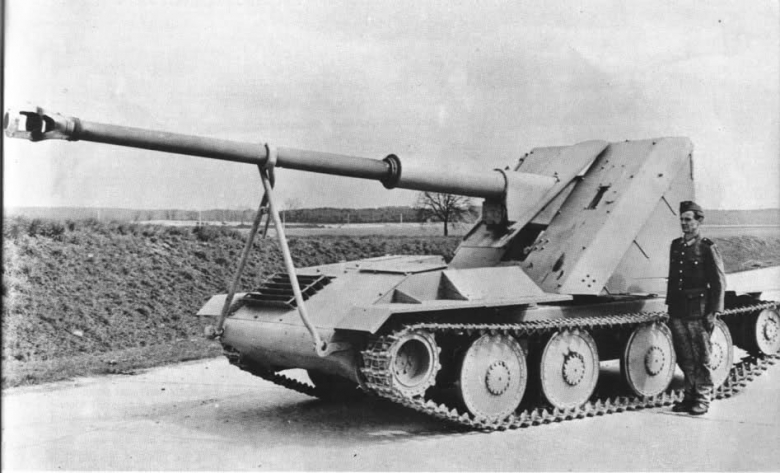 One of the Waffenträger designs that was actually built

If you ask that question on various public forums (which – with the rise of public interest in armored vehicles that can be largely attributed to computer games – are quite numerous), the most common response you get is that they were either stupid or insane. The truth is, they were neither – with some exceptions, of course – and these designs had their own twisted logic behind them. Today, we are going to have a look at some of the reasons behind the proposals for some of the most outrageous contraptions.

By 1944, it was clear to everyone, aside from the biggest optimists, that the Third Reich was finished. There was simply no way to defeat the Soviet onslaught as well as the assault of the western Allies from France given the resources Germany had at its disposal. By the end of the year, supply chains were breaking down one after another and fear gripped the entire military, with chaos reigning supreme – commanders were issuing strategic orders to units that no longer existed, soldiers were not receiving commands from their superiors.

It is no wonder that various wild rumors started circulating amongst the soldiers and officers alike. One of those rumors actually influenced these late wartime German designs. No one knows how this rumor started and how long it’d been circulating, but it’s documented that by early 1945, German staff in Berlin believed that the Soviets had for some time been fielding some sort of super-tank. According to the “reports”, this tank’s frontal armor was supposed to be 300-400mm thick and it was completely unstoppable using conventional anti-tank weapons. 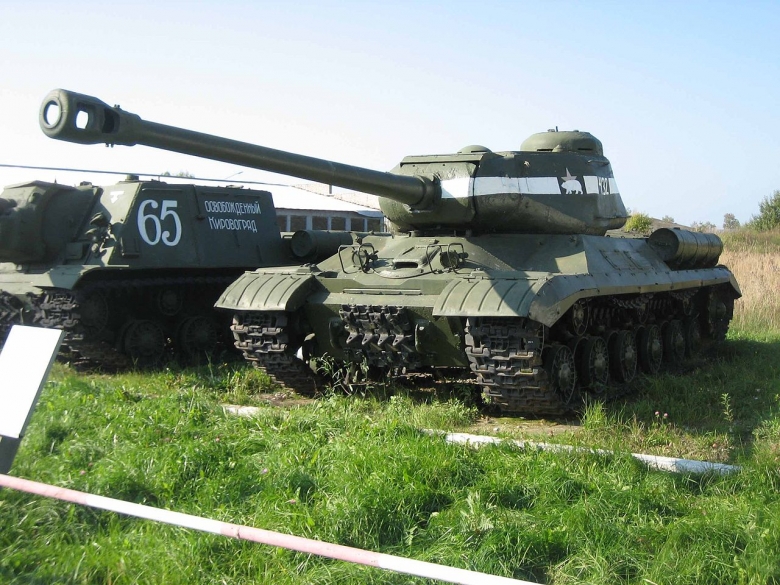 This was not the first time such a rumor had spread. We’ll probably never know exactly how or why the rumor spread – perhaps it was a combination of German fantasies about war-winning superweapons along with a convenient scapegoat for the losses taking place in front of higher rank staff or Hitler himself, who had become disconnected from reality by the end of the war.

After all – when judging history with the benefit of hindsight, one has to be very careful. Things that seem obvious to us after decades of research into wartime military history were not known by the men of that time and under the circumstances, and given the chaos of the late war retreats, this rumor was simply not verifiable. There was one more element to the story – by that time, tank shocks were nothing new. 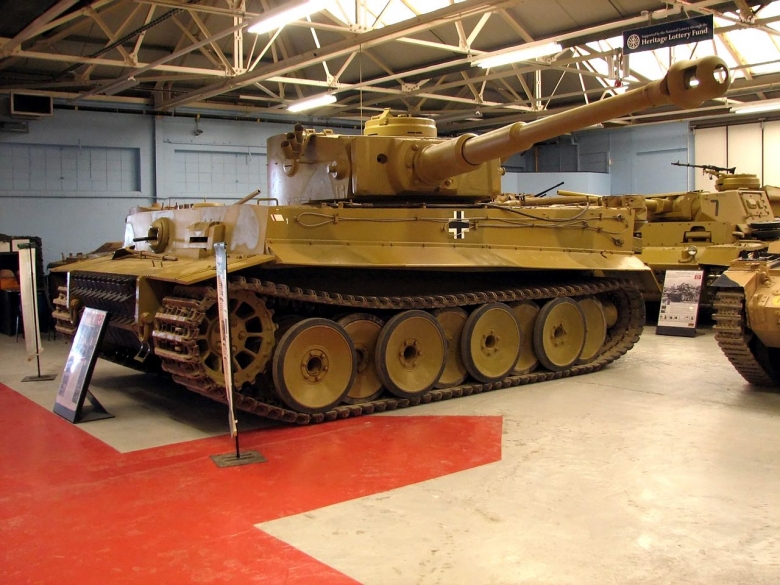 To digress a bit – a “tank shock”, sometimes also called a “tank crisis”, is a situation where the appearance of a certain vehicle on the battlefield that outperforms (or allegedly outperforms) the other side’s tanks so much that it jumpstarts frantic development of armor and anti-tank weapons by the side adversely affected. There were several such situations before 1945, the very first being the appearance of tanks en masse in 1917 during the battle of Cambrai. Another would be the impression the modern T-34 medium tank made on Germans or the appearance of the German Panther and Tiger tanks later on. Under those circumstances, the prospect of another “tank shock” would probably seem completely believable to German designers and soldiers, despite the lack of evidence. That is probably why the German high command decided there might be something to it and ordered German weapon designers to create a weapon that could defeat 300-400mm of armor.

The attempts to create such massively powerful weapons naturally started earlier (in some respects, the Germans were no worse in their predictions than other wartime nations), but were generally unsuccessful. There were three basic ways of building a better anti-tank weapon:

One – make the gun bigger. This is the most obvious choice – if you want a bigger bang, you need a bigger gun, right? Well, not quite. This approach has two major disadvantages. The first one is again obvious – there’s a limit to how large a gun you can build. The Germans reached a plateau at somewhere around the 128mm caliber. Making the gun any bigger generally did not produce that much more armor penetration and while a hit from a massive 15cm or even 17cm shell was sure to destroy an enemy vehicle, the drawbacks (reload speed, logistics) were simply too significant to make such a weapon practical. Proposals for massive 15cm and even 17cm anti-tank guns existed on paper (the best known is the Sturmgeschütz auf Fahrgestell Maus, also known on the internet as “Jagdmaus” and of course its sister project on the E-100 chassis), but they were so outlandish that no prototypes were produced and the program was cancelled in late 1944. The second disadvantage tied into the first: mobility – in the form of anti-tank guns, even the 88mm PaK 43 (L/71) was difficult to operate – it was heavy and unwieldy (it weighed between 4 and 5 tons depending on the mount, while the ubiquitous 75mm PaK 40 weighed only 1.4 tons). The 12.8 PaK 44 weighed around 10 tons and was simply too heavy to operate effectively. 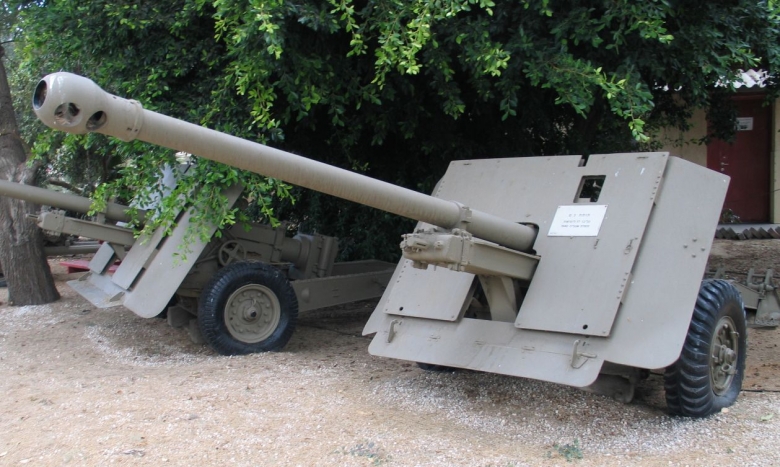 The second method was to improve the existing ammunition principles. A number of very interesting kinetic rounds were developed in Germany, including a series of discarding sabot rounds and Pfeilgeschoss (APFSDS) rounds. While effective, these rounds had two major drawbacks. For starters, wartime discarding sabot rounds weren’t exactly accurate. This was true for both sides – for example the British 17pdr APDS rounds were horribly inaccurate (even though on paper their penetration performance was much better than the standard APCBC rounds), a problem that was to be mitigated by the FS design, but that brings us to the second major problem: the cost. High velocity kinetic penetrators require very hard materials to be effective – in this case, tungsten. Tungsten, however, was very rare and very expensive and alternatives were considered (without much success), such as uranium rounds (not depleted uranium though, just uranium). In the end, there was never enough such material available to produce these rounds in the quantities required.

A third way would be the development of new types of ammunition, and that’s where rumors arose once again. By 1945, it was believed that the only way to defeat so much armor was to use Hollow Charge ammunition (also known as High Explosive Anti-Tank or HEAT). Of course HEAT ammunition was nothing really new, it had been around since 1939-1940 (it was developed before the war). The existing infantry anti-tank weapons using HEAT (in German service the Panzerfausts and the Panzerschreck launcher) were not capable of defeating that much armor, however, and HEAT performance was fickle at best. In the end, all this effort was for nothing and enormous amounts of resources were wasted on designing a counter to something that did not exist.

Or, so it was believed when the war ended, until September 7 1945, when a great military parade took place in Berlin. It was here that the new Soviet IS-3 heavy tank was introduced to the public and to the representatives of western militaries who were completely shocked by it. 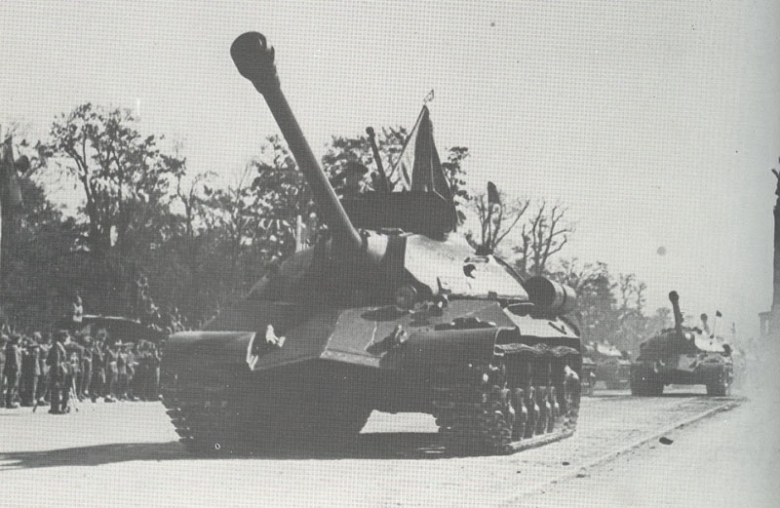 IS-3 heavy tank during the Berlin parade, September 7

This parade started the first post-war tank crisis and the frantic development of armor capable of defeating this threat, such as the British Conqueror. In this sense, the threat of a Soviet super-tank that the Germans believed so much as to dedicate uncounted resources to counter was proven real in the end, but the wartime scramble to counter it was nothing but a chase of shadows.