This month in our Branch of the Month series is dedicated to the light reconnaissance vehicles of Armored Warfare, specifically the SPHINX branch. 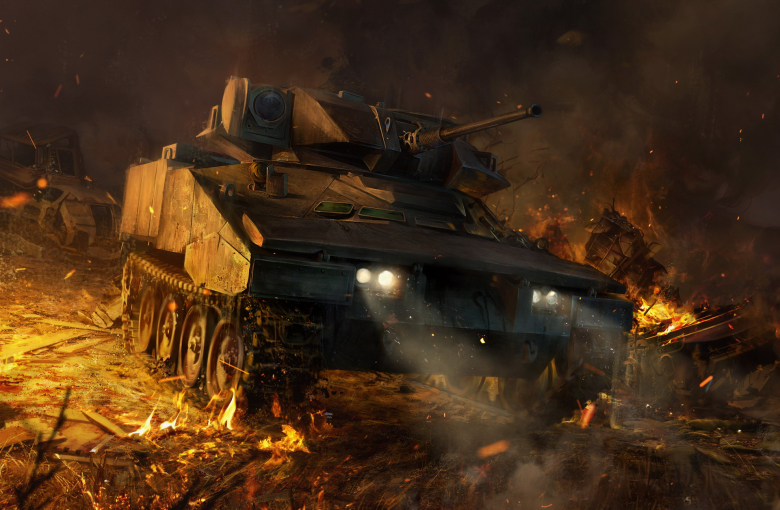 Armored reconnaissance is as old as armored vehicles themselves. The first armored vehicles weren’t lumbering tanks, but cars fitted with armor plating, used for both fire support and scouting ahead of friendly infantry formations, informing them of enemy movements.

While immensely popular during the Great War, the early armored cars also suffered from a number of issues. They were heavy, cumbersome and, due to their poor power-to-weight ratio and ground pressure (all the weight was transferred to the ground only by their – often narrow – tires), they were completely useless without roads or other hard surfaces.

After the end of the First World War, armored cars stayed around (after all, they were far cheaper to produce than their tracked counterparts), but their limitations forced armor designers to look for more suitable solutions for armored reconnaissance. Between the wars and during the Second World War, the design armored scout design branched into several distinctive directions:

Light Armored Cars – the armored cars of old were generally quite unwieldy and underpowered. One idea was to make them smaller, much faster and lightly armed and armored. Light armored cars rarely carried anything heavier than a machinegun, but their speed often saved them from enemy fire so that they could report their findings and life another day. Of course, “light” is a relative term here – the German SdKfz.222 weighed around 4 tons, for example. “Fast” is a relative term as well – its maximum road speed was around 80 km/h. However, these vehicles were effective, cheap to produce and did their job well – the whole category stayed around well after the war and gradually evolved into the modern road scouts.

Heavy Armored Cars – this is the opposite end of the armored cars evolution. Great War armored cars were typically four-wheeled, but as the vehicle designers added more armor, they also had to add more wheels to keep the ground pressure manageable. Armored cars gradually first received three axles and later even four. The American M8 Greyhound or the German SdKfz.234 was a typical example. The Puma weighed around 10 tons and had armor thick enough and a gun big enough to rival that of a light tank, which it really was. A cheaper light tank intended for roads. This category is not really common today as it died out after the war – these vehicles were vulnerable and, at the same time, often too unwieldy to avoid enemy fire. Years later, they’d be reborn as heavy IFVs and fire support vehicles (to a degree).

Tankettes – the tankettes were an interwar blind end of vehicle evolution. Tiny tracked vehicles for one or two soldiers that offered rudimentary protection from small arms fire and were mostly armed with just a machinegun. Their only advantage was that they were cheap but their combat value was negligible and their crews often hated them with passion. This vehicle class did not survive the first year of the war. Only the Polish used them with some success but after 1940, they were mostly relegated to crew training roles. The line between tankettes and the lightest Light Tanks is often blurry – while many usually imagine the Polish TKS to be the perfect representative, the German Panzer I was essentially a tankette as well. 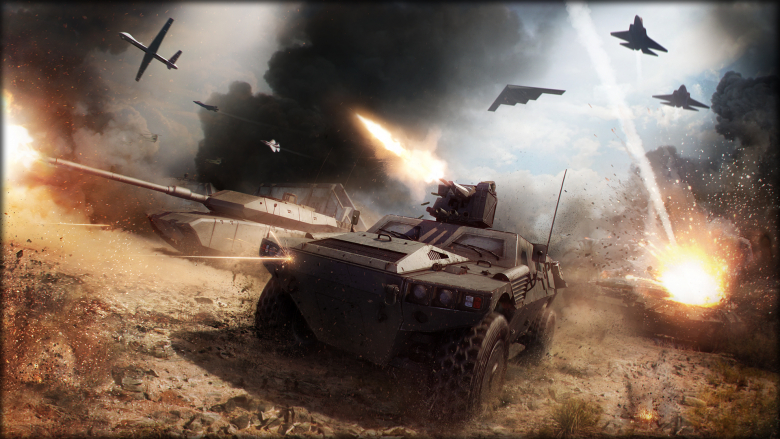 Light Tanks – the ultimate armored scouts, the light tank class saw its heyday in the Second World War. They were faster than medium tanks, but lightly armored. They gradually evolved from tankettes, were older (often pre-war) tanks or were newly designed during the war specifically as scouts. Light Tanks were quite situational – they were often quite fast (although early wartime Light Tanks, such as the French ones, were generally well armored for their class, but also underpowered and slow) but quite vulnerable to pretty much anything heavier than rifles – especially anti-tank rifles (very common in the Soviet theater of the war) and heavy machineguns. Light tanks could be very effective against infantry formations without anti-tank equipment (typical for the far eastern theater) but by the end of the war, they were generally obsolete.

Halftracks – halftracks were another blind end of armored vehicle evolution. Originally, they were supposed to combine the off-road capabilities of tracked vehicles with the speed of a truck, but in reality, they were slow and difficult to maintain. The most famous users of half-tracks were the Germans and, of course, the Americans, but Germany also developed some scout and fire support variants. Half-tracks disappeared with the war’s end and most of the pieces in use after the war were simply from American surplus stocks. Pretty much the only nation that actively developed and used half-tracks after the war was Czechoslovakia with its OT-810 (an improved version of the wartime German halftrack), no-one else bothered with it.

The Second World War shook the foundations of the world. In five years, technology evolved beyond even the wildest dreams of pre-war tacticians: where the skies were defended by bi-planes early in the conflict, six years later, early jets would fight with some of the most powerful propeller monoplanes ever built. Such wild development naturally happened in all military branches, including light armored vehicles.

At the end of the war, the recon role would fall to two categories of vehicles, both covered in Armored Warfare:

The history and the development of both classes is described in detail in the developer diaries linked above, please visit them for more details.

Armored Warfare features several light, recon-oriented branches. From January 1 to January 31 2018, one of them will be available with significant Credit discounts.

XM800T Tier 3 AFV – the American XM800T armored fighting vehicle by FMC was designed in the 1970s to replace the problematic Sheridan Light Tank and the M114 with something better. Several prototypes were built and the vehicle showed much promise, but, like many other weapon systems of the era, the project was cancelled due to the funding shortage caused by the Vietnam War. In Armored Warfare, this vehicle is exceptional in two ways – it has one of the highest rates of fire in the game (750 rounds per minute autocannon) and also the only unguided missiles currently available. It certainly offers some very unique gameplay. You can read more about it in our dedicated article. 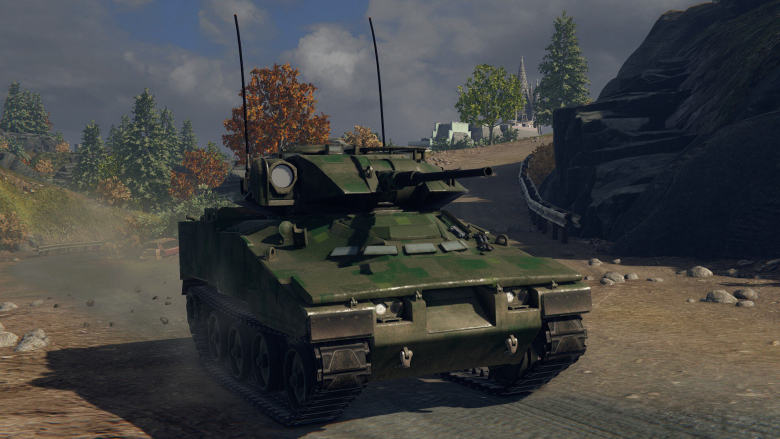 M113 ACAV Tier 4 TD – this vehicle is actually a predecessor of sorts to the XM800T. During the Vietnam War, the Americans armed a number of their M113 APCs with a recoilless rifle. It was a stopgap measure at best – the M113 ACAV was quite vulnerable and the gunner had to be exposed to fire the rifle. In Armored Warfare, this is actually not a scout, but a Tank Destroyer, which means that it needs to stay back and fire at the enemy from distance. It is, however, quite mobile and can, if pressed, serve as an improvised recon vehicle. You can read more about it in our dedicated article. 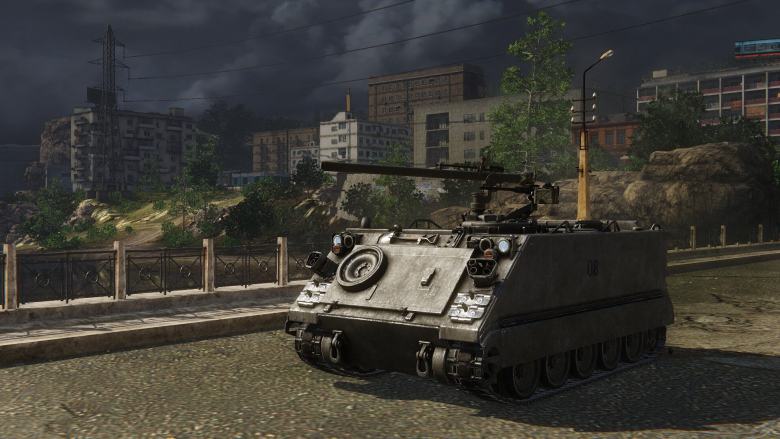 VBL TOW Tier 5 AFV – the VBL TOW is a missile launcher-armed version of the French VBL light scout. It was developed by Panhard in the late 1980s and its designation stands for Véhicule Blindé Léger (Light Armored Vehicle). In a way it was designed for the "old" type of war – symmetric warfare where units in such vehicles wouldn't be the most common target of enemy attention. The VBL was accepted in French service in 1990 and has found its way to around 20, mostly African, countries. It's a very popular export item thanks to its ruggedness and versatility. The biggest operators include France (approximately 1400 in service), Greece, and Oman. You can read more about it in our dedicated article. 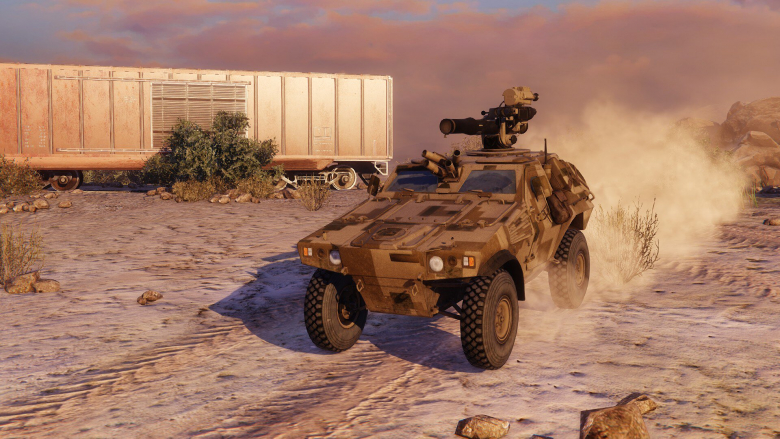 FV721 Fox Tier 6 AFV – the British FV721 Fox is one of the purest scout vehicles in the game. It is one of the classic British reconnaissance vehicles from the 70s. Fast and maneuverable, the Fox boasted blazing speed and excellent scouting capabilities for its time. You can read more about it in our dedicated article. 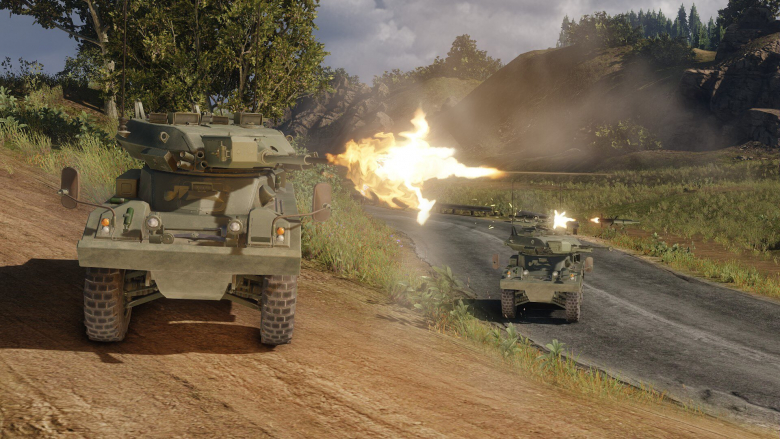 VBL INGWE Tier 7 AFV – this is a version of the Tier 5 VBL, armed with advanced INGWE missiles. It’s fast, stealthy and deadly at even extreme ranges, especially to vehicles without APS or other anti-missile protective measures. You can read more about it in our dedicated article. 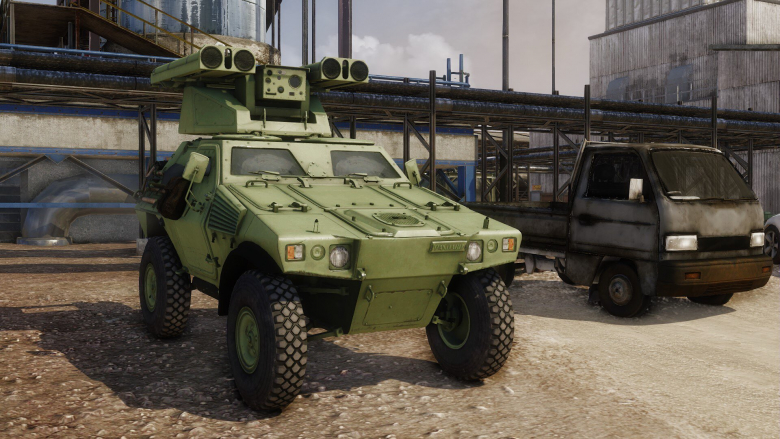 VBR Tier 8 AFV – the VBR is a prototype by Panhard, developed in 2001 as a successor to the VBL. It was bigger and arguably more practical than its predecessor, but attracted little attention and was never mass produced. In Armored Warfare, it continues the VBL tradition of extremely agile four-wheeled vehicles that are excellent scouts. You can read more about it in our dedicated article. 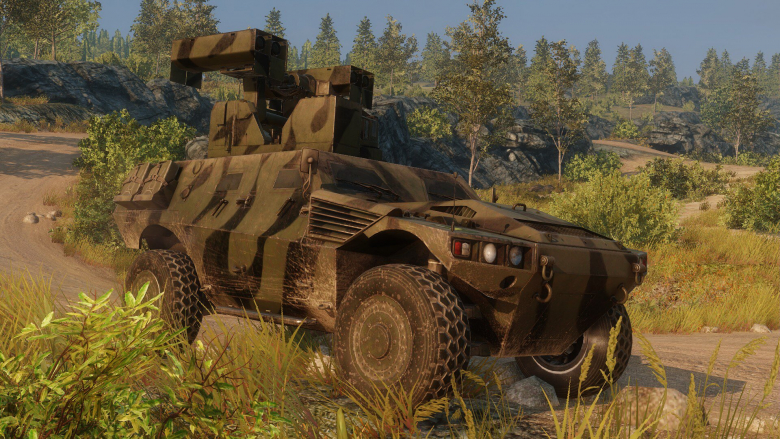 CRAB Tier 9 AFV – the CRAB is another experimental design by Panhard. It was a 2010 attempt to introduce yet another very light and heavily customizable scout vehicle with several unique features such as its driving system, but failed to attract any customers. In Armored Warfare, however, it’s the best four-wheeled scout in the game, second only in recon ability to the Tier 10 SPHINX. It is extremely agile and while it does require advanced driving techniques, skilled players can make it dance around their opponents. You can read more about it in our dedicated article. 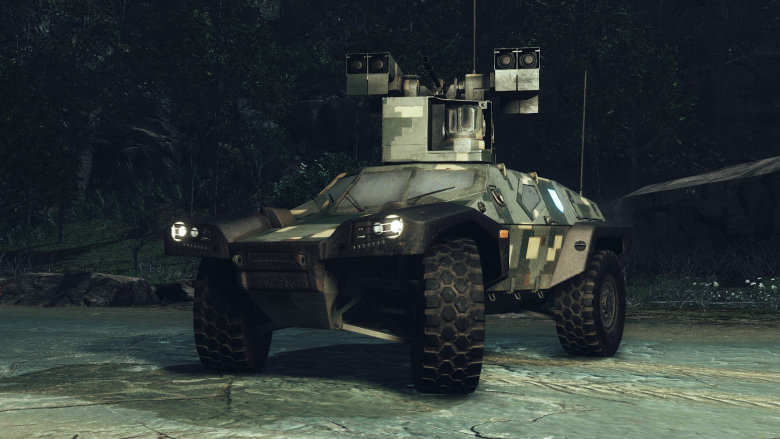 SPHINX Tier 10 AFV – the SPHINX (Secret Project for High Intensity and New Conflicts) is a French prototype that was first introduced to the public at the Eurosatory 2010 Expo alongside the light CRAB, another Panhard vehicle. It was developed as a private venture by Panhard to become France's next armored recon and fire support vehicle, as a part of the Scorpion program, but lost to the ERBC Jaguar and is unlikely to be ever mass-produced. You can, however, drive it in Armored Warfare – much like the CRAB, it is fragile, but its powerful armament and agility make it deadly in skilled hands. You can read more about it in our dedicated article. 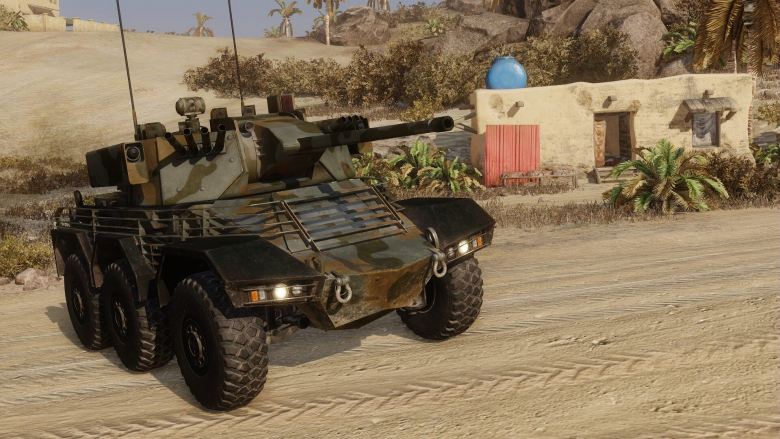 In Armored Warfare, many of these vehicles (the AFVs specifically) are dedicated scouts. Scouting is a process where a player attempts to spot the enemies for his allies to deal with. The AFVs are very suitable for this purpose – in fact, they were specifically introduced to Armored Warfare to fulfill this role. There are essentially two kinds of scouting – or, as it is sometimes called, spotting: