This is the next in the series of Balance 2.0 articles we're bringing you in our effort to help break down some of the most significant changes coming in the upcoming Update 0.19 to Armored Warfare. In today's article, we'll be talking in-depth about the core gameplay changes we've made to damage, vehicle hit point scaling and ammo mechanics (including a HESH rework). Please note that all numbers provided in this article are subject to change as we continue to iterate on tuning values and evaluating the performance of vehicles in Balance 2.0 on the upcoming Public Test Server testing.

In listening to the feedback that was coming from you and evaluating the metrics collected from the matches everyone has been playing, we knew that we wanted to refactor how vehicle damage and health scaled over the tiers. The flat percentile growth we had on the live servers was creating too steep of a power curve, where high tier vehicles in a match could take lower tier vehicles out in two shots, and lower tier vehicles had little to no chance of being a legitimate threat against the higher tier vehicle simply due to the gulf in the damage per shot and health pools that divided them.

As we began developing new scaling rules, we realized that this refactor would also be the best time to make another change we had been wanting to implement for a while, which was to tie damage per shot more closely to the caliber of the shell being fired by the vehicle. This allows damage scaling to feel more intuitive and be more internally consistent across the tiers.

To illustrate, in our current mechanics, a 105mm AP shell from a Tier 3 Leopard 1 deals 263 damage per shot base, while a 105mm AP shell from the Tier 8 M1128 MGS deals 554 damage per shot base. In practice, while there is some assumption of improved damage delivering capabilities of the shells over the decades of innovation that separate those two vehicles, it isn't on the scale that our current damage numbers would imply.

In the real-world, the ammo parameters which have improved the most through innovation are shell velocity, accuracy, and penetration. All of these will continue to scale across tiers in place of base damage per shot. In Balance 2.0, both the Leopard 1 and M1128 MGS will deal damage in the range of 420 damage per shot but the M1128 MGS's shells will feature greater accuracy, much higher penetration to reflect technological improvements, and potentially higher shell velocity. Similar scaling will be found across the rest of the vehicles, with 90mm cannons dealing around 360 damage per shot and 125mm cannons dealing around 500 damage per shot.

With damage per shot leveling out across the tiers, we knew we wanted to do something similar with hit points or else vehicles would simply take longer to destroy the higher you went up in tiers. To accomplish this, we changed the rules for determining hit points to be less about Vehicle Class and Tier and instead based them on the tonnage of the vehicle, before adjusting them using factors such as modern innovations in survivability and durability that would justify a vehicle possessing more hit points than perhaps its predecessor. We started with the Tier 7 and 8 range as our initial range for hit points and tuned every vehicle based on these new rules around the 2000 hit point range.

As a comparison, in the pre-0.19 version of the game, the Tier 4 T-64 has 1408 HP and deals 455 damage per shot with 222mm penetration. It has the potential to face the Tier 6 T-72A with its 1705 HP, 639 damage per shot at 334mm penetration. The power gap between the two vehicles just from these numbers alone is so significant that the T-64 is simply not a credible threat against the T-72A, yet they face each other in matches.

In Balance 2.0, the Tier 4 T-64 will have 2230 HP and deal 500 damage per shot with 260mm penetration. The T-64BV, appearing at Tier 6 in Balance 2.0, has 2285 HP, deals 500 damage per shot, and has 380mm penetration. We can see here that its advantage over the Tier 4 is having significantly better penetration which means the T-64BV player will have an easier time getting shots into the Tier 4 target. However, if the T-64 player outflanks, out maneuvers, or does a better job at landing penetrating shots, the T-64 can be a legitimate threat to the T-64BV and could succeed in winning in a 1v1 situation.

Similar comparisons can be found throughout the vehicles in Balance 2.0. Higher tier vehicles will benefit from generally higher mobility, weapon handling, penetration, better armor, and more advanced technology such as ERA and APS just like they do in the current live version, but they will not inherently dominate lower tiers with higher damage per shot and larger hit point pools on top of everything else.

As a side-effect, this new approach to balance can also potentially expand the range of Tiers that are viable to face each other in a match, which would allow for faster queue times in off peak hours and higher levels of vehicle diversity in the matches. It is our goal that vehicles are viable across a larger range of tiers and that the matches stay fun for players on both the high and low end of the tier range in a match. We're excited about the potential this change has for improving queue times and match diversity in the future.

Now you may have noticed when we discussed shell caliber being the main determining factor for how much damage a shot does, there was no distinguishing between the shell types. In live, you can generally count on HEAT to hit harder than AP while having drawbacks of slower shell velocity and having to deal with more counter measures. This is still a philosophy that we wanted to build on, but we have taken this opportunity to adjust the way this philosophy manifests in the mechanics.

In Balance 2.0, the five primary ammo types are:

Armor Piercing (includes all subtypes, such as AP, APDS, APFSDS)

There is understandably a lot to digest with these new shell mechanics. In brief, AP shells are high accuracy shells that have lower base penetration but struggle less with counter measures than the other two primary types. Their high shell velocity makes them ideal for targeting high speed vehicles on the move, but they receive no damage bonus when impacting thin armor. HEAT shells are lower accuracy, slower shells, but are capable of significantly more devastation when impacting thinly armored targets or striking weak points on highly armored targets, but slower shell speeds and lower accuracy than AP can make those shots harder to land.

Similarly, ATGMs function mostly like higher penetration guided HEAT shells except for their additional vulnerability to APS mechanics. HESH is strong against targets that are taking advantage of armor angling to compensate for thinner armor but loses a lot of its punch against spaced armor and other counter measures. And HE shells continue to have the unique property of being able to deal damage without fully penetrating armor, but their damage potential falls of quickly against thicker armor. 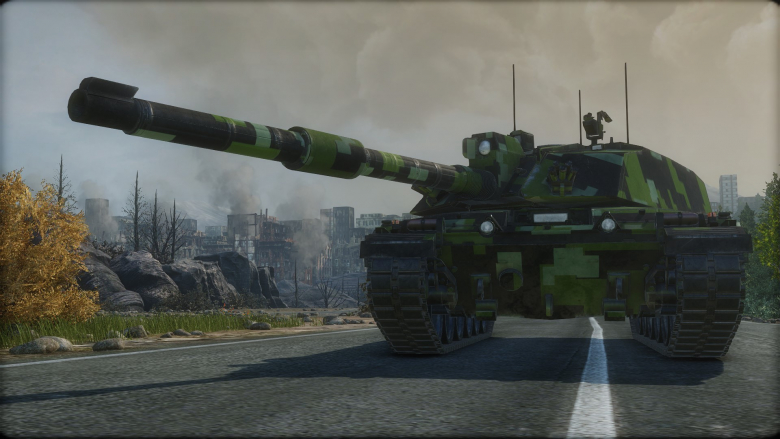 There are a number of ammunition subtypes as well, including tandem warheads, depleted uranium, and multi-purpose HEAT rounds (MP) available to certain vehicles, each with their own minor change to the normal rules outlined above. The shell types a vehicle has access to will reflect the real-world use of the vehicle and the different ammo mechanics are sure to add some unique flavors to different vehicle lines depending on what they have access to.

In the next article, we will discuss the other side of core combat mechanics by taking a look at the improvements to armor, changes to overall accuracy, and take a look at how counter measures such as smoke, APS, and ERA factor into Balance 2.0.

Thanks for taking the time to read about our upcoming changes to damage, health, and ammo mechanics. We look forward to discussing these changes with you further once you have had a chance to check them out for yourselves!

The first part of the series, where Project Director Richard Taylor explains the basics of Balance 2.0 and the philosophy behind it.