We can trace the roots leading to the development of the Chieftain main battle tank right back to the last days of the Second World War and Britain's first mass-produced "universal tank" (no longer a cruiser or an infantry tank), the Centurion. In the early 50s, Britain – still ravaged by the impact of a victorious but costly war – was looking to improve the firepower of its tank forces (preferably at a bargain price). The first step towards the new tank was a memorandum requiring the development of Medium Tank No.2 (No.1 was the FV 221 Caernarvon, derived from the Conqueror). It was supposed to be an entire family of weapon system to enter service in 1956 (which naturally turned out to be too optimistic). 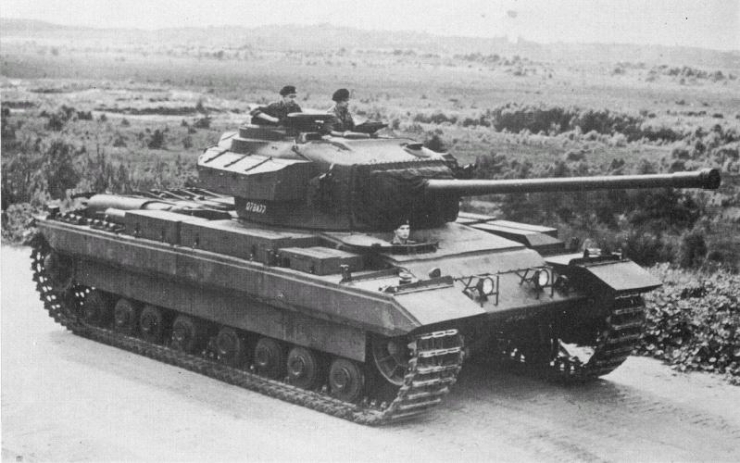 Reality – as is often the case – clashed with the well-laid plans and the road to the new successful tank was long and paved with dead ends.

When developing the new vehicle, the British combined their experience from the final years of the war with the influence of Soviet tank design (represented by the fearsome IS-3, which, however, turned out not to be as formidable as everyone thought). The results of Centurion versus T-34 battles in Korea played their part as well. In their evaluation, the British reached the conclusion that the vehicle properties should have the following order of importance:

Armor was part of the crew safety requirement and was set above mobility not to protect the vehicle from anti-tank fire as much as from field artillery, as confirmed by the experience in Korea.

The dominance of the firepower was, however, undisputed. At first, the British looked at some rather unorthodox solutions – one (as well as attempts to cut the cost of such vehicles) was the Prodigal project. This was an attempt to create a very light (and cheap) tank killer. There were multiple Prodigal variants (some for example with twin 120mm recoilless guns) and some were so small they could, with a bit of exaggeration, be classified as tankettes. The pinnacle of Prodigal development was a 30 ton vehicle equipped with an automatically-loaded 120mm L11 variant, found recently in the archives by David Lister. Ultimately, however, the project went did not get anywhere.

Another interesting example was the experiment with liquid shell propellant. The best known attempt is the FV4401 Contentious. This approach certainly had its advantages: the explosion of the liquid in the form of aerosol allowed the shells to reach better muzzle velocity. On the other hand, the entire high-pressure system was quite sensitive and complicated and it was not possible to immediately fire a shell – the liquid had to be sprayed into the chamber first (unlike regular rounds which can be fired immediately). Additionally, the results were inconsistent – the high muzzle velocity could not be obtained every time the gun was fired. 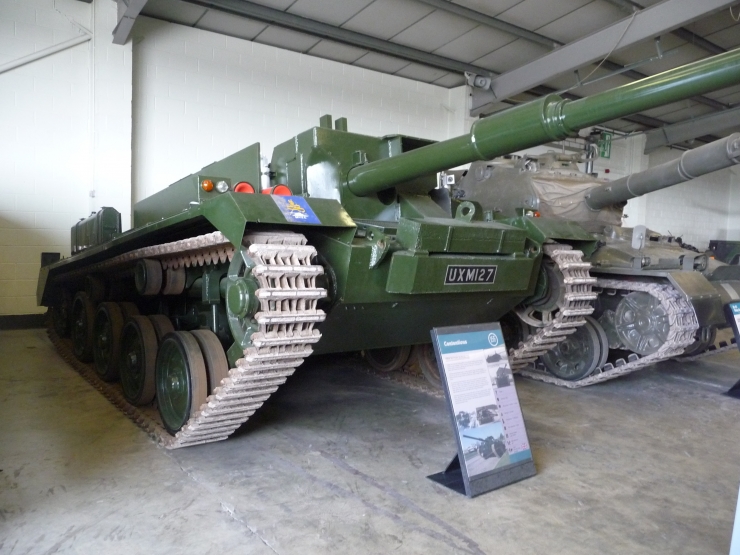 In 1954, the general staff finally made up their mind about the requirements for the future vehicle. It was to be a 4 man crew tank with conventional layout and with Centurion-level mobility (that was deemed sufficient) – very high maximum speed was deemed useless based on wartime experience (too exhausting for the crew). The tank was, however, supposed to accelerate very quickly – so the vehicle needed to have at least 20 hp/t power-to-weight ratio. The maximum weight limit of the tank was to be 68 tons but the report recommended the 45 ton category as more suitable. The required rate of fire was set to 10 rounds per minute for the first minute of combat and 6 rounds per minute for the following 4 minutes. The vehicle was also to carry at least 60 rounds of ammunition (with 80 rounds considered to be optimal).

There was trilateral armor conference between the USA, Great Britain and Canada in 1957. It was here that the concept of the "main battle tank" was first defined. The conference called for such a vehicle to be equipped with a gun capable of penetrating 120mm of armor (sloped at 60 degrees) at 1800 meters – as a result of this the 120mm gun caliber was selected as the most suitable.

Not everyone agreed with that assessment and many gun experts considered 105mm to be the highest practical caliber (due to shell manipulation and weight) but in the end the solution was found in using split ammunition. In theory, two-piece ammunition (the shell and the charge kept separately) had its own drawbacks, specifically the risk of internal explosions (the charges were deemed vulnerable) but this issue was resolved by storing the charges in a "wet" storage compartment (filled with a mixture of water and glycol). If such a container was penetrated by shell fragments or spalling, the water poured in and stopped, or at least delayed, the explosion so the crew had a high chance of getting out. The two-piece ammunition also allowed for safer and more ergonomic storage within the tank and as a result the rate of fire was kept at an acceptable 6 rounds per minute.

Naturally, such a big gun was very heavy, significantly increasing the overall weight of the tank. In order to compensate this issue, the developers chose to make the hull size as small as possible. One of the results of that approach was the fact that the driver in combat conditions (in the buttoned-up tank) was now practically lying on his back – a solution that first came with the Chieftain and that many other developers copied. The vehicle was to be powered by a V8 multi-fuel engine with an automatic transmission. This tank received the designation FV4201.

The decision to have the tank equipped with a multi-fuel engine came from the 1958 decision and generally applied (in theory) to all western tanks (which nobody but the British bothered with anyway) – the engine of choice in this case was the Leyland L60 two-stroke diesel. It was, again, theoretically, simple to maintain and relatively durable thanks to the low pressure applied to the connection rod bearings and it also had good performance during low temperatures, which were to be expected on the European battlefield. It is worth noting that nobody ever used a different fuel for the L60 engine and as such the multi-fuel requirement (likely stemming from the requirement to use enemy fuel sources, if needed) is a concept of dubious quality.

This engine requirement meant further delays to tank development as the entire engine compartment needed to be overhauled. The vehicle was supposed to achieve 42 km/h speed with this engine and the weight limit was 45,4 tons (later on this was increased to 51,8 tons).

In order to accelerate development, various elements of the new tank (including the turret concept without external mantlet) were tested on the so-called "40 ton Centurion", also known as the FV4202. Three were built in 1956 – one is currently in Bovington, one served as an ARV in Bordon and the fate of the third is not known. Urban legend has it that it accidently ended up in Israel, but Israeli military sources deny that.

In 1958 it was clear that the project would be further delayed because Leyland was busy with re-arming the Centurion to 105mm. In order to speed things up a bit, the company Vickers Armstrong (already responsible for the turret) was invited to help with the tank. The mock-up was to be ready for approval in March 1959.

Meanwhile, Leyland continued to develop the new engine with the first test version (with one cylinder) successfully trialing by the end of 1958 and the TN12 transmission in 1959. The tests, however, uncovered numerous issues and fixing them took a few more months but, in September 1959, the first version of the L60 engine was ready to be trialed in the first FV4201 prototype called FV4201 P1. The running part of the vehicle was ready in September – the turret was temporarily replaced by a chunk of ballast to simulate its weight while it was developed. Since the turret allegedly reminded someone of the Windsor castle towers, the company started to call it the "Windsor turret". Compared to the earlier FV4202 version, the turret was modified to improve its gun depression and elevation from -7,5/+15 degrees to -10/+20 degrees. The frontal armor was also increased and the turret was fitted with an IR searchlight. Meanwhile, the turret-less vehicle underwent its first (very careful) trials.

The vehicle modifications caused the power-to-weight ratio to drop to 15,5 hp/t for the more powerful L60 version planned with 700 hp. Fourteen prototypes were planned at this point – six (designated P1-P6) were intended for military trials and six (designated W1-W6) for War Office trials. Two more were ordered for comparative trials with the German Leopard.

The military trials started in early 1960 and uncovered multiple issues with the engine. For one it was overheating (the transmission was too but the engine proved to be the bigger issue). This was caused by the engine compartment being partially heated up by the exhaust muffler, which had to be moved and the transmission box had to be modified as well. All in all the fixing of this issue (as well as some others) added 5 more tons to the weight of the vehicle. This in turn proved to be too much for the original Horstmann suspension, which had to be strenghtened, and the roadwheels had to be replaced with bigger ones, which increased the weight yet again. The engine also had to be detuned to 500 horsepower in order to avoid vibrations and the vehicle effectively ended with 10 hp/t power-to-weight ratio, way below the original requirements. Only in 1961 was the engine tuned up to 550hp.

The FV4201 P3 participated in early gunnery trials in April 1960. The vehicle was to be eventually equipped with a laser rangefinder but the ranging .50cal machinegun proved to be much cheaper, durable and effective. The British also opted for an electromechanical turret traverse instead of a hydraulic one – it was slower and bulkier than hydraulics but the hydraulic fluid aerosol (seeping from leaking pipes) was highly flammable and was deemed too high risk for the crew. Firing trials continued from 1961 to 1962 and went surprisingly smoothly. The new 120mm L11 gun was extremely powerful. Mobility was still an issue but the tests resulted in two prototypes (W1 and W2) being secretely deployed by the British troops in Germany (one went to the 1st Royal Tank Regiment and the other to the 5th Royal Tank Regiment).