The four-wheel FV721 Fox Combat Vehicle Reconnaissance (Wheeled) is one of the classic British reconnaissance vehicles from the 70s. Fast and maneuverable, the Fox boasted blazing speed and excellent scouting capabilities for its time.

The Fox CVR(W) was born in the early 1960s as a complementary vehicle to the CVR(T) vehicle series (that included the Scorpion and the Scimitar tracked reconnaissance vehicles) and was the result of a FVRDE (Fighting Vehicle Research and Development Establishment) program to replace the aging Alvis Saladin. The British Army was perfectly happy with tracked vehicles for reconnaissance at that point, but it also recognized the multitude of theaters of operation the British could be deployed to, some of which favored wheeled vehicles. Actual development of the Fox began in 1965 with 15 prototype vehicles built between November 1967 and April 1969. The first trials took place in 1968 and the vehicle was first publicly mentioned in October 1969. 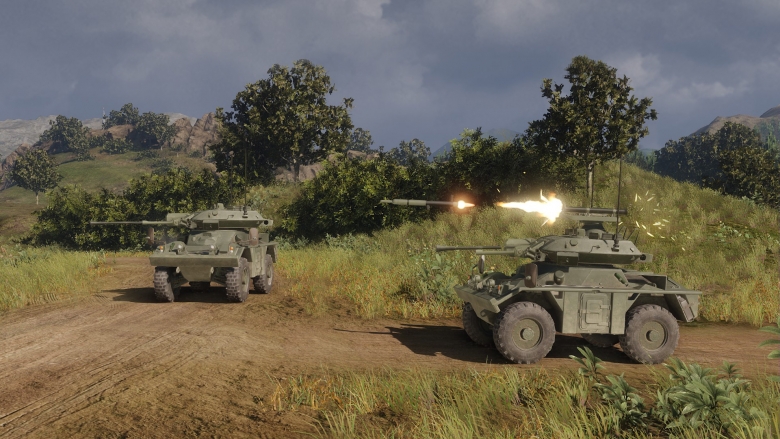 The military placed an order for mass-production at the Royal Ordnance Factory in Leeds and mass-production of the Fox began in 1972-1973. The Fox was based on the older Ferret armored car (production of which ended in 1971) and the older design could be seen in the hull. The crew consisted of three men. The vehicle weighed 6120kg (combat weight) and was made mostly of aluminum. The dimensions were as follows:

The armor of the Fox was quite thin – after all, it was a recon vehicle – and was designed to protect it against small arms fire, machinegun and light autocannon fire and artillery shell fragments. The frontal plates were only 33.5mm thick, the hull side armor was 41mm thick and the rear was 38mm thick. Armor this thin was, unfortunately, a necessity to keep the vehicle as agile and light as possible, amongst other reasons, for the purposes of air transportation and floatation – the vehicle could cross bodies of water using flotation screens stored on the hull roof.

To ensure the required mobility and agility, this 4x4 vehicle was powered by two different engines: the earlier 185hp six-cylinder petrol Jaguar 4.2L J60 No.1 Mk 100A engine and – later on – the 190hp six-cylinder petrol Jaguar 4.2L XK giving 190hp at 4500 RPM (power-to-weight ratio: 31,04 hp/t), paired with a Daimler transmission. There were two types of tires as well: the earlier Dunlop Trak-grips and the later military grade Michelins. The maximum speed of the vehicle was rated at 104 km/h (65 mph), although during trials, a turret-less Fox could reach speeds of up to 100 mph. Its operational range was 434 km. 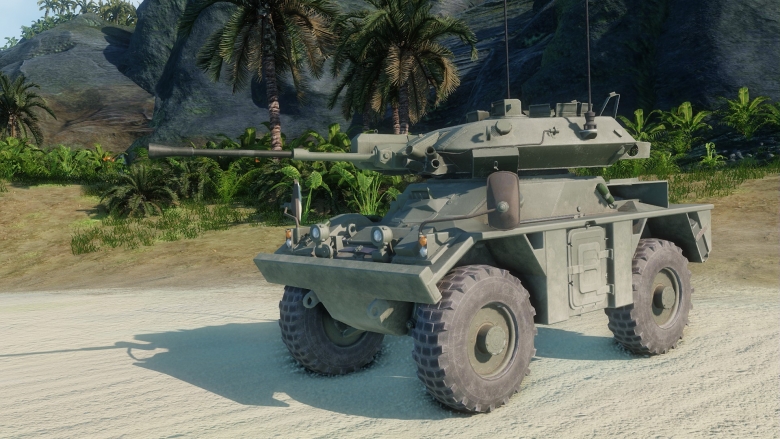 For a vehicle of its size, the Fox was well-armed with 30mm L21 series RARDEN automatic cannon. This gun was generally quite popular with the British (despite the fact that the prototype version turned out to be horribly unreliable) and could fire multiple types of ammunition, including APDS-T, APSE-T and HEI-T rounds. The vehicle was originally supposed to be armed with an American TRW-6425 25mm automatic cannon, but the combination of unusual caliber and alleged issues with the gun put the British off and they decided to go for a British 30mm. In any case, the RARDEN turned out to be the right choice and it was used on several other vehicles as well. In the Fox turret, the L21 could depress to -14 degrees and elevate to +41 degrees. The Fox carried 99 rounds for the gun. Secondary armament consisted of one 7.62 mm machine gun. 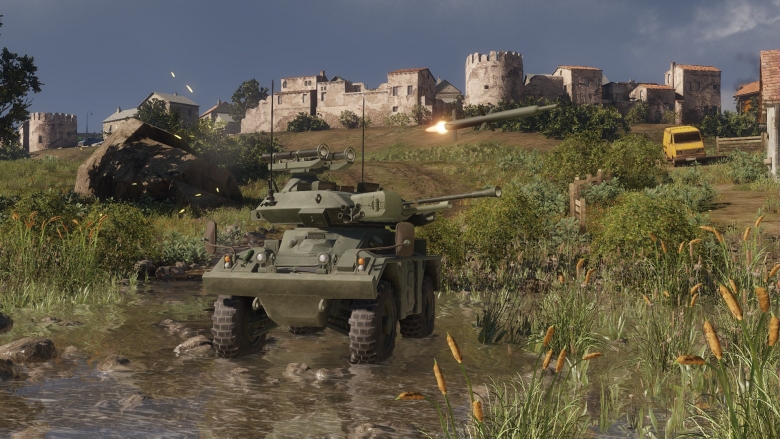 The Fox was produced from 1972-1973 to around 1985. Roughly 325 vehicles were made, of which Britain kept 200 and exported the rest. It was never a very successful export vehicle – more than 100 went to Nigeria and Malawi (an unknown number remains in service to this day) and the British Foxes were phased out of service by 1994. The phased out Fox turrets along with phased out Scorpion hulls were actually used to produce a rather peculiar hybrid vehicle, the Sabre. An estimated 136 of these vehicles were made and saw service between 1995 and 2004. An interesting prototype of a MILAN ATGM-equipped Fox was also built – in this case the twin launcher (MILAN Compact Turret) was mounted on the roof while the RARDEN cannon was replaced by a 7.62mm chaingun to produce an interesting light tank destroyer vehicle, unfortunately, no potential buyers showed an interest. 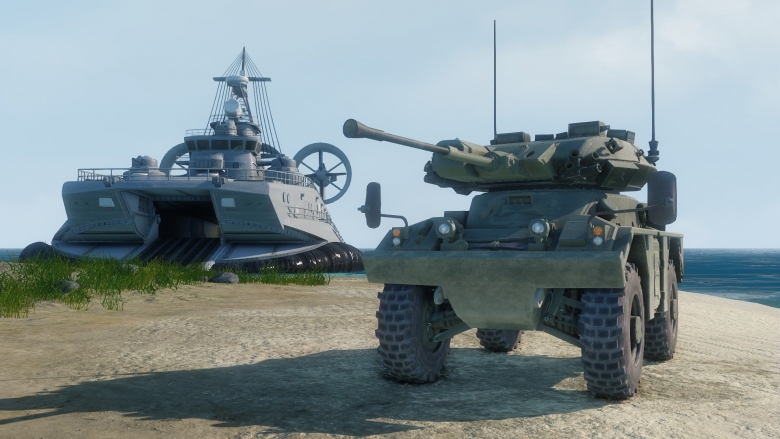 Another interesting modification of the Fox was the Vixen, a command and liaison utility vehicle based upon the enlarged Fox hull and with only a machinegun for armament. The vehicle – due to its rather strange design – ended up being an ergonomic nightmare and was never mass-produced either; the only prototype is currently in the Bovington museum.

In Armored Warfare, the Fox is a tier 5 Armored Fighting Vehicle. Even for its class and tier it has extremely thin armor and generally a low amount of hitpoints, but it compensates for these drawbacks with its amazing mobility. The Fox is speed incarnate and its powerful Jaguar engine allows it to dance around its opponents in close combat. The Fox can comfortably drive in circles around main battle tanks, unleashing its firepower against its opponents’ vulnerable unarmored areas. 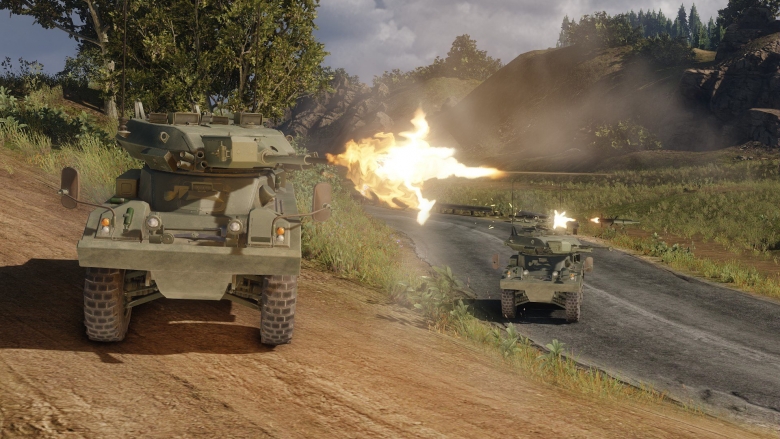 Its 30mm RARDEN autocannon has excellent damage per minute characteristics, but it is not the only weapon the Fox has. Players can unlock a MILAN ATGM launcher upgrade – with it the Fox can engage its targets at distances where its basic armament would not be effective. The Fox also has a low silhouette for a vehicle with a turret, resulting in a good camouflage factor and spotting range.

The Fox is perhaps the ultimate tier 5 scout. Players who like reconnaissance and spotting unsuspecting opponents for their heavier teammates to take out will enjoy this vehicle immensely and with the upcoming directional camouflage indicator, the Fox will be even more enjoyable in the future.