The M109A6 Paladin is one of the advanced variants of the old M109 American self-propelled gun series. The original M109 was developed by Ground System Division of United Defense LP alongside its smaller counterpart called M108 during the 1960’s to increase the mobile indirect firepower of the American infantry formations. The M109 was equipped with a 155mm howitzer while the M108 carried only a 105mm howitzer that proved insufficient for the demands of contemporary warfare. The M108 was phased out rather quickly but the M109 (in a heavily modernized form) remains in service to this day.

The M109 series was first used during the Vietnam War and has seen combat in numerous conflicts ever since. It was also widely exported and remains to this day the most numerous indirect fire self-propelled gun of western origin. Its most recent mass-produced version is the M109A6 Paladin.

The Paladin was originally produced between 1991 and 1999 with around 950 built. Compared to the older versions of the M109 series the Paladin is equipped with a sophisticated fire control and localization system. This heavily modernized element allows it to rapidly aim – a Paladin can fire within 60 seconds from coming to full halt. This ability helps to protect the Paladin from counter-battery fire. Additionally the Paladin can fire very advanced ammunition such as the M982 Excalibur ultra-precise extended range round that allows the Paladin to perform even danger close fire missions. The upgraded M284 howitzer has a sustained rate of fire of around 4 rounds per minute and the maximum range with special ammunition is over 30 kilometers. 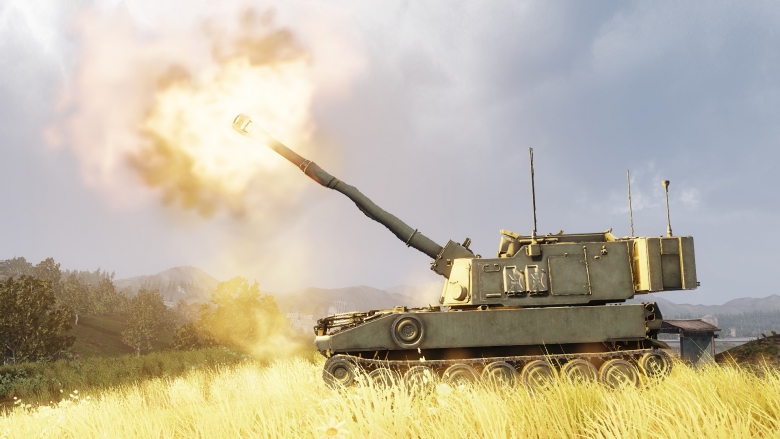 The M109A6 Paladin – or, rather the M109 series in general – was not supposed to be serving this long and numerous replacements were developed at one point or another by the U.S. military. However the failures to produce a suitable replacement prolonged the service of this venerable vehicle family to the 21st century. While a successful export item, the Paladin was lately replaced by several notable militaries by competing projects, the British AS90 and the German Panzerhaubitze 2000. Nevertheless an upgrade of the Paladin for the U.S. Army (the M109A7, built on the Bradley chassis) was already approved and so the M109 series will continue to serve, possibly for decades to come.

In Armored Warfare the Paladin is a Tier 8 artillery vehicle. Its main features in the game are the quick aim and mobility that allow it to stay ahead of its opponents, taking a few shots and moving further. This ability to fire and quickly relocate is essential to Paladin gameplay. In addition to that, while not having as high damage per shot as other tier 8 artillery vehicles, the Paladin fires very fast. It is an excellent self-propelled gun for those players who like to quickly shell immobile enemies and then move on in order to avoid artillery counter-fire.
Share