The balance process is a delicate one, its primary goal being the delivery of the very best game experience. Today, we will take a look at how we do it.

There are two things we need to bear in mind when considering a vehicle for Armored Warfare:

While we value historicity greatly, we want to present our players with as balanced gameplay as possible. To that end, we take several measures to ensure that our players have the very best experience possible.

When considering which vehicles are suitable for Armored Warfare, we have a very wide range to choose from. There are a great many vehicles that are potentially suitable but some have certain properties that would not fit in with our game. 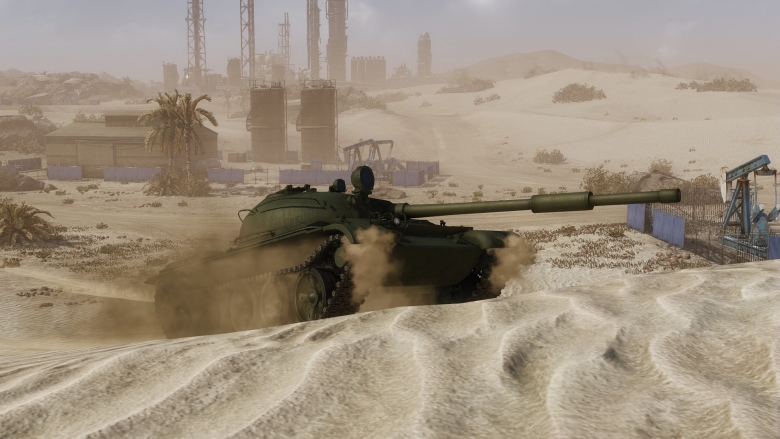 We try to avoid vehicles that potentially represent a balance risk. Perhaps the most obvious of these would be the various tank destroyers or self-propelled guns of extreme calibers such as the British FV215b with its 183mm gun. This tank existed only as a mock-up and even though it would theoretically be possible to introduce it in Armored Warfare, we want to specifically avoid having such unbalanced weapons with potentially too high single shot damage (damage generally increases with gun caliber). Being killed by one shot is not fun and this effect can eventually lead to player frustration.

Even without such extreme examples, however, we have literally hundreds of candidates to choose from. Our Dealer system allows us to progress through tanks without being restricted by their countries of origin, which in turn allows us to discard project-only or prototype vehicles that would otherwise be required to fill in a slot in the progression block. In Armored Warfare, prototype vehicles will generally fill the role of premium tanks whereas project-only vehicles should not be appearing at all.

Players will be able to play with the following vehicle classes:

In the case of main battle tank and artillery candidates, the choice of class is usually very simple but it gets much more blurry with the other three. While some vehicles are clearly tank destroyers for example, in some cases the roles very much overlap.

When selecting the role of the vehicle, we first try to keep with the original vehicle designation. There is no doubt that some light tanks could perform the scouting role very well, but considering their producer's and operator's intention of using them as actual (light) tanks, we mostly adhere to this designation. 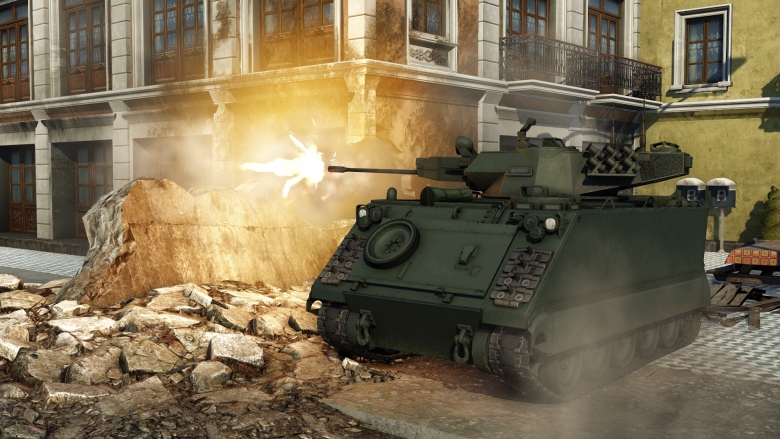 Ultimately, it is the gameplay aspect that decides how we use the multi-role vehicles. One of the main factors in this decision is the vehicle's armament. Generally speaking, we take a look at its main weaponry (which could consist of a gun but also a missile launcher). Vehicles equipped with 90mm or larger guns that fire medium or high velocity shells do generally become tank destroyers while vehicles with less potent guns do become AFVs. Gameplay balance plays a role in this choice as each class has unique bonuses and thus the most important question at this point for us is: "What do we want players to do with it?"

Another matter is that some classes are not represented in the game. There are two solutions to that particular issue:

Balancing a vehicle before release

Before we start working on a vehicle, we generally have a tier for it in mind. Some vehicles are simply way too powerful to appear early on in the game and having an Abrams fighting a T-55 in the desert would be possibly realistic but it certainly would not be fun. Therefore, we generally match vehicles of roughly equal age and power to the same tiers by comparing their properties.

When a vehicle is chosen for implementation, its initial state is as historical as possible. Historical properties are based on numerous sources, the most common of which are specialized publications: books, military magazines and encyclopedias. As a general rule, we try to use as many sources in the original language as possible, so for example our data for former Soviet tanks usually comes from Russian sources.

Historical properties generally include: armor, speed, traverse and any other values that we find reliable sources on. In some cases, the tanks are too modern to have their properties published because certain aspects such as the armor composition are classified. In these cases we use renowned author estimates that are generally published in various sources. Other excellent sources of information are specialized websites where tank enthusiasts from around the world gather to share their knowledge. When no data is available from any reputable sources, we rely on various estimates and comparisons with other existing vehicles. 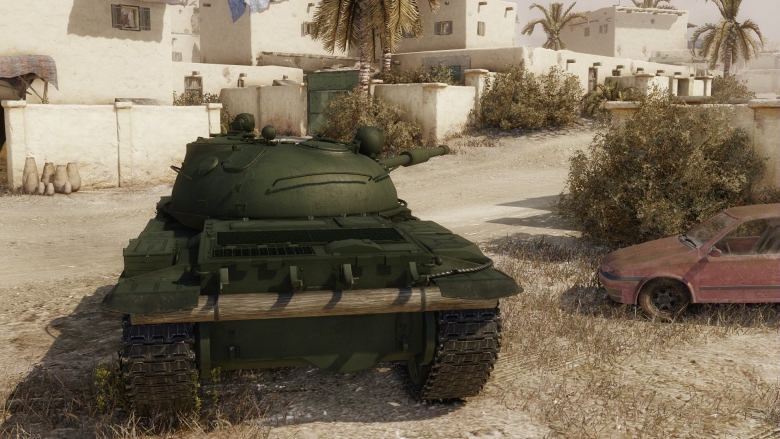 Certain values and vehicle properties are sometimes documented but cannot be used. A typical case would be gun penetration. Gun penetration in Armored Warfare is loosely based on real life values for various shells at 2000 meters (with 30 degrees armor slope). Vehicles will however not be fighting at 2000 meters, firing at tiny dots in your scope would also make for a very poor game. Penetration at close distances has to be artificially lowered in order to make the armor mechanism in the game actually relevant and that is why penetration is considered a balance parameter in Armored Warfare. On the other hand, the basis for penetration is always real and no guns should have completely outlandish values.

When considering the class impact on gameplay, it is clear that some balance adjustments have to be made very early on to the historical values based on the class alone. A typical example would be the main battle tank class. In real life, main battle tanks are the ultimate evolution of the mechanized war and having them in the game as strong as they are in real life would make all the other vehicle classes obsolete. Therefore, some parameters are adjusted to give other classes a fighting chance against these armored behemoths.

Following this initial phase, each vehicle undergoes a rigorous regime of tests and rebalances before its release to make it perform on par to its tier and its expected role. Multiple balance iterations take place over time in order to make the vehicle as ready as possible.

Balancing of vehicles after their release

The balancing process does not end with vehicle release. Every vehicle's battle statistics are carefully monitored with its victory ratio being only one of the many stats. The monitoring and rebalancing mechanism is quite complex. Matt Festa (lead systems designer at Obsidian Entertainment) explains this process:

"For that kind of analysis, we are creating a data-gathering/telemetry pipeline so that we can mine the vast amounts of match data that will be coming in (and which is already coming in at a smaller scale from the Alpha playtests) to look for obvious clues that a particular vehicle, class of vehicles, tier of vehicles, etc. are performing the way we want them to. There are a lot of good indicators regarding how over- or under-powered a vehicle may be, but sometimes they have to be viewed in unexpected combinations to really see why they don't perform as expected.

For example, an obvious indicator that a vehicle is over-powered would be if the average amount of reputation it earns from a match across all players far exceeds the average for similar vehicles within a given set (same tier, same tier/class). The same would be true for total damage caused, or just about any other broad match statistic that is used in determining per-player match rewards. However, the community might broadly report that a particular vehicle is over-powered even though when we look at the data it appears to fall within an average range. In this case it requires a little more analysis across multiple data points. 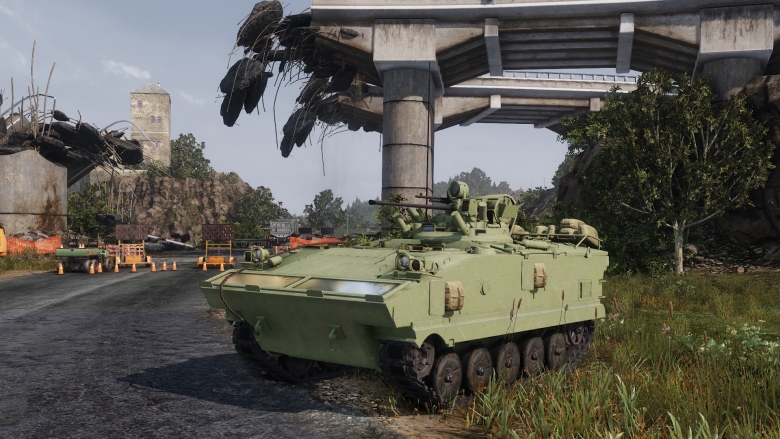 A good example would be cases where a vehicle has average or below-average match results for typical players, but in the hands of a hardcore player it is utterly over-powered. This may often be because the hardcore players have identified (and shared amongst one another) a way to exploit a particular strength of a vehicle that the casual player either is not aware of or may not be able to exploit as effectively as a hardcore player. In this case, the only way this might actually be identified is by using both average reputation (or damage, etc.) and breaking that data down into groups based on player skill, then comparing the average reputation earned in the vehicle for each skill range versus the average reputation earned in all vehicles within a given set for each skill range.

Perhaps the most sensitive issue is the one of rebalancing the premium vehicles. We do not want to change any services that users have already paid for, except for applying actual improvements wherever possible. On the other hand, we are dedicated to providing our players with a fair environment without toxic pay-to-win elements that ultimately make the game worse for everybody.

Rebalancing of any game system is a sensitive subject, and vehicle balance is at the top of that list. We will do everything possible to release balanced vehicles but as more vehicles and game systems are introduced, the previously achieved equilibrium can change. In order to maintain a balanced and fun environment we will not hesitate to make changes when needed.

Many players can pay just as much or more money while unlocking "regular" vehicles – as such, premium vehicles should not avoid rebalance solely because they are a paid for item. Premium vehicles are still a part of the overall game environment and balance must be respected. Hopefully no parameter adjustments on these vehicles will be needed as they are initially balanced to have somewhat less power than a fully upgraded vehicle of the same tier.